For better health: What our island’s archives teach us about change, health and motivation

Last week, Romanian Professor Bogdan Onac guided me around the Caves of Drach next to Porto Cristo. He’s an amicable geologist, and as we stepped over piles of bat guano, he explained what cave structures tell us about sea-level changes and ancient climates.

Most of us know that stalactites are icicle-like limestone structures that form as water droplets trickle down cave ceilings and deposit tiny amounts of dissolved mineral calcite. Stable cave environments preserve these structures for millions of years. As the Earth’s temperature rises, however, melting polar ice caps cause sea levels to rise, flooding these caves, submerging the stalactites.

If the water remains still, new tiny calcium carbonate crystals grow around the submerged stalactites, forming bulbous hanging calcite structures called speleothems. Slicing a speleothem down the middle is like cutting through an onion. Layer upon layer of mineral deposits shows Bogdan and his colleagues how sea level rose and fell during geological history.

Whilst most shorelines have larger tides that don’t permit calcium deposits, the almost tideless Balearic Isles allow pools of brackish waters to flood Majorca’s caves, still and unmoving for millennia. As a result, the tens of kilometres of hollow tunnels here on our island are a climate archive. Pertinently, this natural stone library shows how sea level has risen significantly over the past 100 years after thousands of years of little change. It’s solid evidence that, since the dawn of the industrial revolution, the world has been getting warmer at an alarming rate.

Work like Bogdan’s is crucial in getting the public to recognise the impact of industry and carbon emissions, motivating us to act on climate change. In the book of Genesis, Noah builds an ark to protect life from a rising flood. How ironic, I thought, that the geologists who unearth these natural archives should be doing the same.

After seeing the natural caves, I visited an artificial archive at Casa Planas on Avinguda de Sant Ferran. Its photo archive doesn’t teach us so much about Earth’s history but of Mallorca’s. 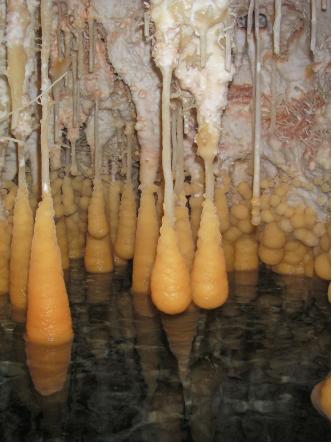 Originally a photo studio for developing film, Casa Planas was founded by famed Majorquin photographer Josep Planas I Montayá. His granddaughter, Marina Planas, has preserved its antique contents and now runs Casa Planas as a Contemporary Arts and Cultural Centre. She gave us a tour through the annals of photographs, cluttered with analogue slide projectors, wooden developing trays and glass bottles of hydroquinone that made the room smell like old leather.

The annals housed thousands of albums, each complete with photographs and negatives that document the island through the 50s, 60s, 70s and 80s.

Whilst old wedding photos showed comedic changes in fashion, the aerial images of our towns and coast struck me most. The Planas archives capture the impact of the tourism boom when a sleepy Mediterranean island turned into a tourism-fuelled GDP machine. Real estate developers built hotels and apartment blocks along a wild and picturesque shoreline. Locals made mistakes. The environment suffered. Few, if any, were looking at the big picture or the long-term consequences.

It’s only after looking through the photographs in the Casa Planas archives that you sense the enormity of change. Yet, at the time, it was so gradual that it went unnoticed.

Thankfully, a construction law introduced in 1988 now makes it a lot harder for developers to get planning permission. But I wondered if that law would have passed had it not been for archives like that of Casa Planas, chronicling the impact of economic growth.

The Caves of Drach and Casa Planas provide an essential lesson for our health. Archives- artificial or natural- turn gradual, indiscernible change into something more tangible, present and, thus, motivating.

When we record, log and track our physical performance and fitness markers, we create an archive for our health. Like changes in sea level or coastlines, changes to our health are relatively gradual. No one gets fit after a single gym session. No one gets fat after one night of heavy drinking.

Unfortunately, we have what is known as a present bias. We tend to act when reward or punishment is close to us in time. In the present, the gym is hard, and the pub is fun. When change is gradual, it’s challenging to grasp the benefits or consequences of our actions until it’s too late.

Jack Hollis, a researcher at Oregon Health and Science University, sought to find what motivates and disciplines us to lose weight. His study, published in the American Journal of Preventative Medicine, found that the number of food records kept per week proved to be a significant predictor of subject weight loss.

In a different Korean study published in the journal ‘Nature’, obese subjects were encouraged to log weight and meals in a smartphone app. Those who logged more frequently showed the most significant weight loss.

All gradual change happens behind the scenes of our day-to-day lives. We don’t notice it, and so we never act on it.

Unless that is, we record, log and track tiny differences across time. Archives shed light on otherwise indiscernible change, motivating us to do things better. And so, I am grateful to Bogdan and his colleagues, who unearth natural archives and help us see how uncontrolled industry is impacting our planet.

I am thankful to the Planas family for showing us the impact of unchecked economic growth on our island. And I am grateful to Garmin, the developers of my smartwatch, who record, log and track my performance, creating an archive of my health, motivating me to get up and go for another run.