One of the culinary facts of life is that soups of all kinds can be quickly and easily made. Another is that many people think soups are difficult to make and are also labour-intensive.
Yet another is that anyone with a blender can turn out a genuine gazpacho, Spain’s most famous cold soup, without thinking too much about it.

All you have to do is put into the blender bowl a chopped small onion, peeled tomatoes, peeled cucumbers with some of the seeds removed, chopped green peppers, finely chopped garlic, breadcrumbs previously soaked in water and squeezed dry, some virgen extra olive oil and a tiny amount of vinegar.

You then add some water and blitz at the highest speed until everything is well blended. Add salt to taste and enough extra water to achieve your preferred consistency.
In about 12 minutes from start to finish you have a gazpacho you can transfer to a jug and keep in the fridge until it is very well chilled. It could hardly be easier or quicker.
I have given no measurements for the above

ingredients because different amounts produce quite distinct results. The finished gazpacho depends on individual taste, but there are certain guidelines that should be considered.

Too much onion is a mistake, so much so that I usually leave it out altogether. Those who like the taste of cucumber should add more and those with a preference for the green pepper flavour should add the appropriate amount. Some cooks like a thick texture, so they add more bread. The bread I prefer for gazpacho and most other recipes is Majorcan pan moreno, also known as pan pagès.

After being soaked in water or milk and squeezed dry, is has a superb loose crumb that is ideal for adding to stuffings and for thickening cold and hot sauces. It is perfect for a traditional English bread sauce.

Before adding the garlic to the blender, I prefer to pound it in a mortar with a little salt until it is reduced to a paste. You should always peel the tomatoes. You can use any kind of green peppers, but the light green Mallorcan variety is best because of their flavour and thin skins. The most important single piece of advice I can give you for making a successful gazpacho is to go easy on the vinegar. It is essential to use smooth high quality wine or sherry vinegar. Cider vinegar is also a suitable choice because it is less aggressive.

But even when you are using a mild vinegar, add it sparingly. A gazpacho should be tangy but it should never have an overwhelming taste of vinegar. The vast majority of cooks, professionals as well as amateurs, are inclined to add too much vinegar.

Gazpacho has its origins in the fields ofAndalusia, and for farm workers it meant sustenance rather than just refreshment. Nowadays it is mainly a starter for a summer meal, although in some Spanish households there is always a big jug of gazpacho in the fridge for use as a cooler instead of a cold soft drink.

You can’t do that, however, if you’re watching your weight. Although gazpacho is full of vegetables it also contains a good amount of olive oil and the calories that come with it. If it weren’t for those calories, gazpacho wouldn’t have sustained an Andalusian farmer during his long working day. 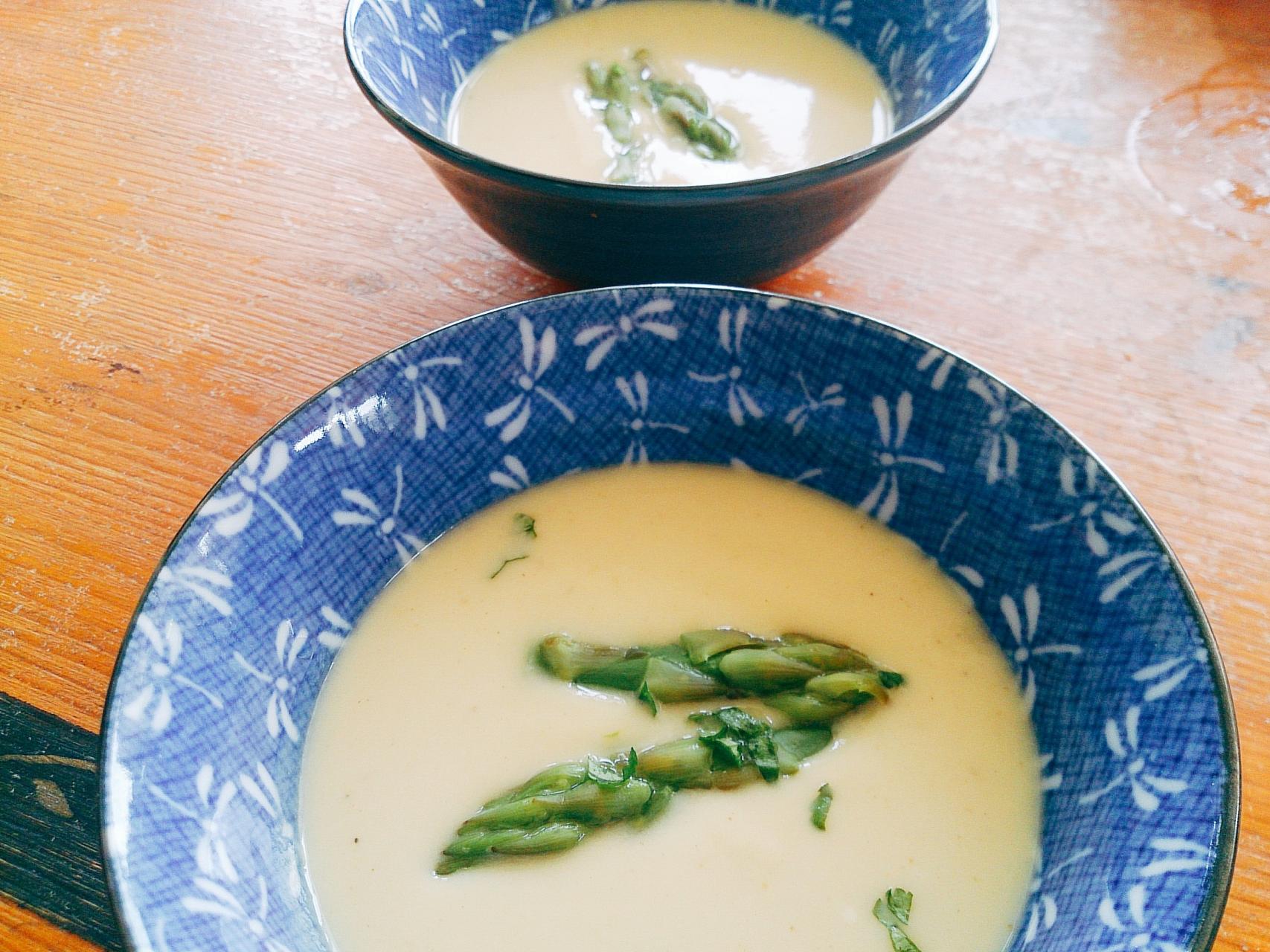 You can, of course, make gazpacho without olive oil — but it wouldn’t be an authentic one. When doing any of the major Spanish or Mallorcan dishes, you must never settle for second best.

A gazpacho made as above can be served in plates, bowls, glasses or cups. In some up-market restaurants, the tasting menu starts with two or three small tapas, one of which can be gazpacho (or some other soup) served in a one-shot glass. It’s an elegant way of serving gazpacho, but I always think I’d have preferred it in a good-sized tumbler.

The consistency of a gazpacho made as above is the kind preferred by most Spaniards I know. But some of them like to have something to chew on, so to the bowl or plate they add finely chopped onion, green pepper, tomato, cucumber and diced bread. Sometimes the bread is toasted but it can also be deep-fried to add extra crunchiness.

Given its origins in the fields of Andalusia, the gazpacho is strictly rustic fare. But that wasn’t good enough for chefs in hotels and restaurants, so when they started to serve gazpacho as a summer starter, they looked for a way to give the farmers’ soup an up-market image.

They stuck to the original recipe but decided to serve chopped vegetables separately. The smooth gazpacho was served from a tureen and the diced vegetables and toasted croutons were presented in small attractive ceramic bowls. Diners could help themselves to the amounts of diced veggies and croutons they wanted, or leave them out.

A simple peasant gazpacho is one of the world’s great dishes and I never tire of it. Although I would never mess about with it at home, some up-market cooks have interesting variations.

Koldo Royo, when he had his one-star Michelin restaurant in the Paseo Marítimo, did a gazpacho that also contained watermelon. It was delicious, with the taste of the tomatoes and the watermelon coming through clearly. And the amount of vinegar Koldo used was spot on. Gazpacho is so universally known and liked that we are inclined to forget about Andalusia’s other cold soups. Most people would agree that Malaga’s ajoblanco is Spain’s second best cold soup. Unlike gazpacho, however, ajoblanco hasn’t travelled abroad or even extensively in Spain.

But it’s a soup that’s well worth knowing and, as it contains almonds, Majorca is a good place to make it. 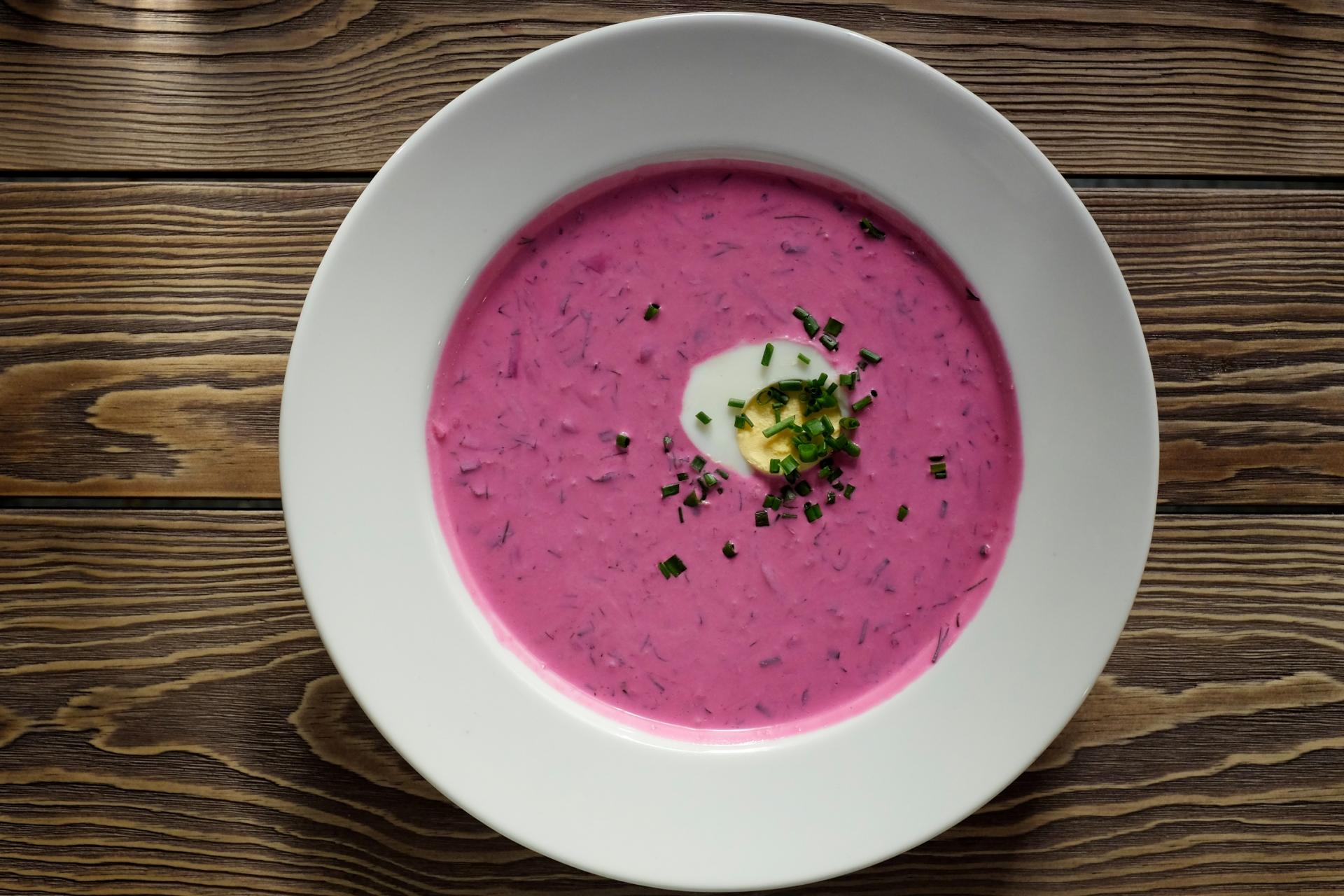 Gazpacho andaluz was originally rustic fare but ajoblanco has become an urban dish with built-in sophistication and elegance you wouldn’t find in traditional rural cooking.
Málaga, like Majorca, has excellent almonds and ajoblanco is built around them. This cold soup also contains garlic, bread, olive oil, salt and vinegar with the addition of a few moscatel grapes as a garnish.

Málaga’s moscatel grapes are among the world’s best and their inclusion in ajoblanco is yet another case of how cooks make the most of the ingredients at hand. And it works beautifully.

In cities, towns, villages and hamlets, ajoblanco is still the Malagueños’ favourite way of beginning a summer lunch or dinner. Or both, because real ajoblanco aficionados eat it twice a day.

As you walk through a small Málaga village in the morning or afternoon, you can hear a cacophony of pounding as housewives mash up the garlic and almonds in copper mortars with copper pestles. But in urban areas, where traditions are more likely to die out, the metallic pounding sound is replaced by the whirr of a blender.

Ajoblanco contains vinegar and olive oil and it is essential to use the best you can afford. The olive oil should be virgen extra and the vinegar must be a high quality non-aggressive one.

A blender is faster than a mortar and pestle, but it gives quite different results. A blender ajoblanco will have a smoother finish — but with a less interesting texture. An ajoblanco made with ingredients pounded in a mortar always has more character.

Although I would now start working with my mortar and pestle, most cooks opt for the blender. Put the almonds and sliced garlic into the blender, add a little water and blitz until the almonds are reduced to a pulp. Don’t blitz for too long or the mixture will have a baby food texture. Put in the squeezed out bread and start adding the oil a little at a time, as if making mayonnaise. 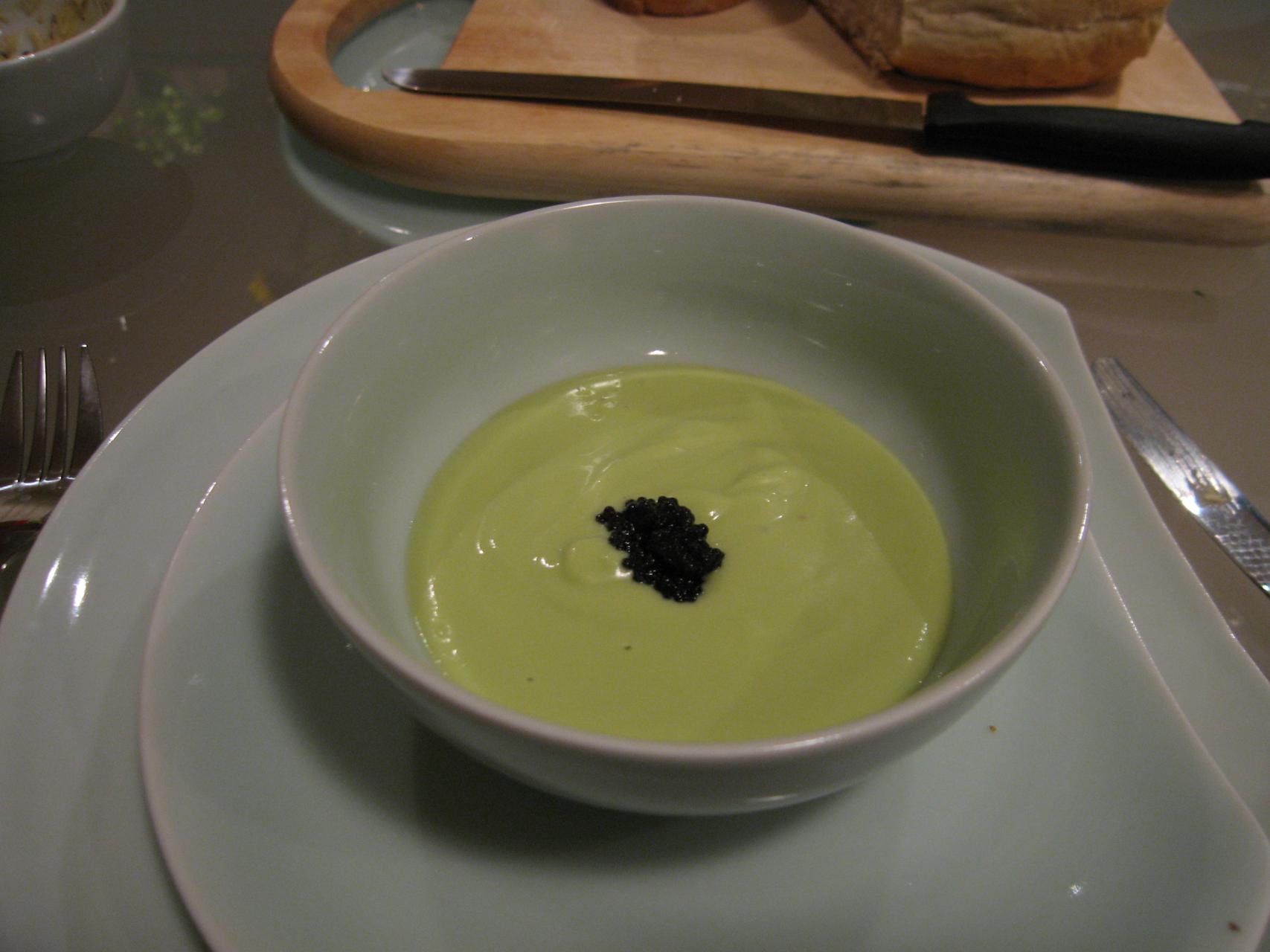 When the oil has been used up, pour the contents of the blender into a big bowl or soup tureen and add about a litre of ice-cold water to get the consistency you prefer. Stir in vinegar and salt to taste and leave the ajoblanco in the fridge until it is very cold.

The vinegar is essential to give the ajoblanco a tangy taste, but you must never be heavy-handed with it, even when using a non-aggressive top quality one.

Add peeled and seeded moscatel grapes just before serving. Some housewives now use seedless grapes, which save time and effort. But seedless grapes do not have the distinctive flavour of the moscatel variety.

Housewives in some parts of Andalusia leave out the grapes and add little balls of melon. If you eat ajoblanco every day of the week, this makes a nice change, but it is not an improvement on moscatel grapes. There are other variations on the ajoblanco theme but they aren’t as good as the original.

Mallorcan almonds are smaller than most other varieties but they are also extremely tasty and are ideal for use in an ajoblanco. It is always best to buy your almonds, and all other kinds of nuts, at the specialist dried fruit stalls at the Mercat d’Olivar and the Santa Catalina market. If you do some of your shopping at inland weekly markets, you will also find quality nuts there — although usually dearer than in Palma.

And never buy at any inland market stall that doesn’t have its prices clearly marked — these places are frequently tourist traps and their prices can be a rip-off.

Nuts in packets and tins are not so good mainly because they are not as fresh as those sold at the markets. The oil in nuts can become rancid quite quickly, and old ones could add a stale taste to any dish in which they are used.

It is also important to buy almonds and other nuts in small quantities because they will still turn rancid when kept in a jar with a tight-fitting lid. Buy 100 grs at a time for general use. That will be more than enough when almonds are needed as a thickening agent or to add a bit of texture to a dish, and you’ll use them up quite quickly, so they won’t get a chance to go stale.

Almonds are sold in various formats: roasted, with a salty covering, in slivers or quite plain and either peeled or unpeeled. It’s the latter you want for ajoblanco (and many other dishes) and they are sold under the name of almendra cruda, or raw almonds.
The skins protect the almond and help to prevent it from turning rancid. The best way to remove the skins is to soak the almonds in boiling water for a couple of minutes. The skins will then slip off easily.

Although ajoblanco is a healthy soup, it contains bread, oil and all those almonds, so it’s not the best dish for those who are watching their weight.
If you are forever fighting the battle of the bulge, you cannot afford to be like some Malagueños and have ajoblanco twice a day…or even once a day.

But that doesn’t mean you have to miss out on the delights of this delicious cold soup: have it as a weekend treat.