Popular with German and Spanish tourists, apart from me, there wasn´t a Brit in sight

Popular with German and Spanish tourists, apart from me, there wasn´t a Brit in sight. | J. SOCIAS

Summer time and thankfully Mallorca is busy. I spent my two week break in beautiful Sa Rapita on the south coast. Popular with German and Spanish tourists, apart from me, there wasn´t a Brit in sight. Infact I felt rather “alone” while watching the European Championships. When I watched Denmark v. England in the local bar it was abit like a scene from my favourite film, Zulu, me in the middle surrounded by Danes!

-The local authorities need to crackdown on food labelling in foreign languages. I went into a German owned supermarket to buy some stomach pills. I found what I thought were the pills I wanted but as all the labelling was in German and the Spanish small print was very small, I asked the shop assistant to confirm that it was the right medicine. She said yes but claimed she didn´t have her glasses and she would come back to me. She returned about five minutes later and confirmed that these were the right pills. When I got home I took one of the tablets and end of story....well until my partner pointed out, on reading the tiny Spanish small print, that I had bought denture cleaning tablets! My stomach hasn´t been the same since!

-I proudly picked my first home grown tomato this week. It was quite a special moment. As I admired my handy work I suddenly thought that it must be one of the most expensive tomatoes in the world. The actual plant cost me three euros, then watering over six weeks, special attention from the gardener and fertilizer etc. I reckon that the single tomato had cost me in excess of 13 euros! Thirteen euros for a single tomato, not exactly value for money. But it did taste delicious. Unfortunately, my local food shop is not interested in buying my other three tomatoes which are growing away at the moment. I can´t understand why....three tomatoes for 42 euros sounds like a good deal to me! 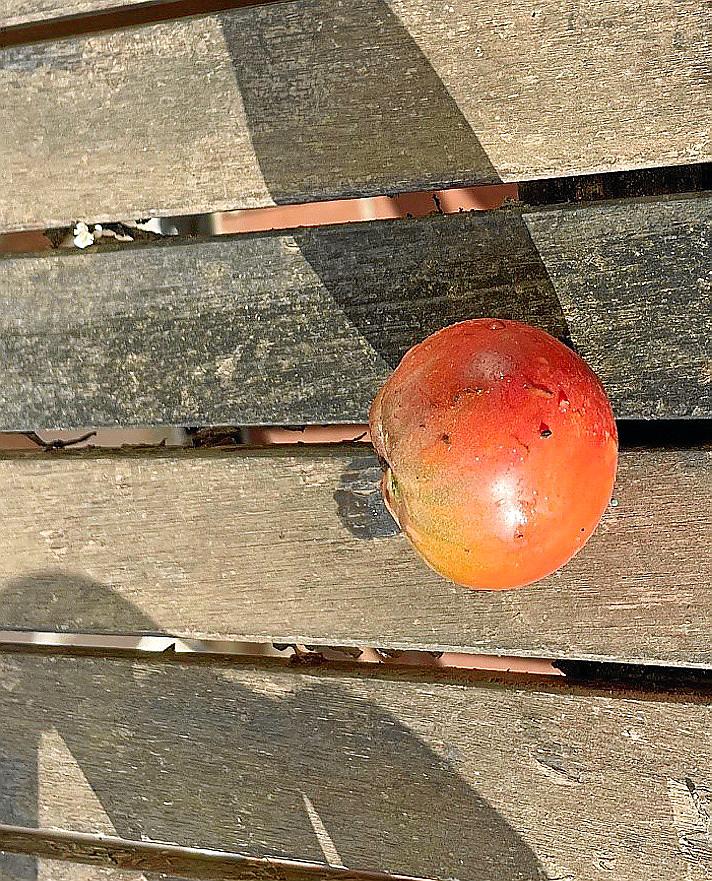 You just don´t know who you are going to meet on Majorca. I was having lunch at Den Repic beach in Soller, earlier this month when Michael Douglas walked by. I am a big Michael Douglas fan and over the years I have interviewed him on numerous occasions. I went over to him and as usual Douglas was the perfect gentleman. I even asked him to come over and meet my family which he did. My eight year old daughter didn´t appear to be at all interested, infact she hardly raised her head from her iPad. But this week I was watching Wall Street 2, Money Never Sleeps, one of my favourite films. My daughter remarked that one of the actors looked very much like the man we had met on the beach in Soller. She even showed some interest in the film and remarked that it must be great to look like a film actor. I didn´t have the heart to tell her that the person on Soller beach was the person in the film!

And finally there is nothing that annoys me more than people queue jumping at taxi ranks. At least on two occasions in the last six months taxis have been stolen from me eventhough I was first in the queue. On a hot afternoon I was duely waiting for a taxi at the rank in the Borne when I noticed a tourist flagging down a taxi on the other side of the road. I shouted to him in English that I was first and he should wait. He replied that he was just trying to help me. Good excuse or the truth....I will never know, but once biten twice shy!

Sure. Myself and partner used to be regular visitors to this beach and EsTrenc years ago…. That’s when until some pillock in City Hall decided the chiringitos be pulled down owing to the “ detriment of the local landscape “ Resulting in a litter pandemic, all in the issue of the local landscape…. Forget the Tourists of what they came to this beach strip for……Drive them away along with their Euros to another Country