There are still some people, Mallorcans and foreigners but mainly foreigners, who say Palma in the old days was a better place than it is today. I don’t agree.

I sometimes regret the disappearance of certain aspects of Palma life, but the many improvements we have seen over the past six decades have made most aspects of everyday living so much better for all of us.

You need only pay a visit to Palma’s main market, the Mercat d’Olivar, so see what I mean. In the old days (I’m going back 60 years) the Olivar market had a certain rustic charm for some housewives.

I shopped there every day during my first decade here, but the narrow passageways and hotchpotch array of mainly badly laid-out stalls were not my idea of a great Mediterranean market. 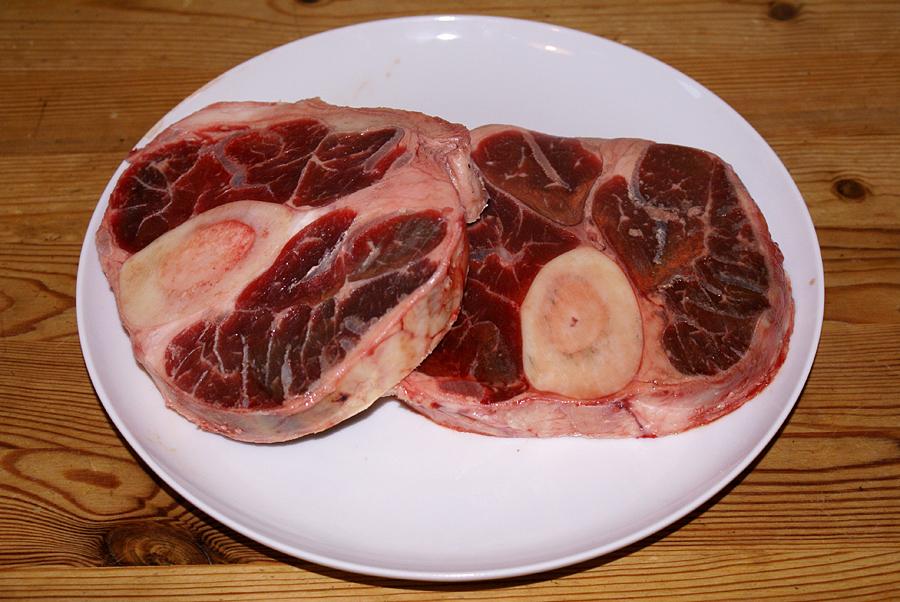 The modern Mercat d’Olivar with is broad aisles and well-lit stalls that are beautifully laid out with mounds of gorgeous fruit and vegetables, is much more to my liking.

Another difference that is much welcomed by all professional and keen amateur cooks is the sheer abundance of supplies, from humble carrots, turnips or onions to some of the exotic fruits that are now grown here and in southern Spain.

When I was making chicken liver pâté some 55 years ago (which I did frequently because it’s a good standby dish for summer and winter meals) I had to get to the market very early and then race around the stalls to pick up a couple of livers here and there.

If I was there early enough and had a good day, I was able to find the 15 or so I needed to make some little terrines of pâté using the recipe in Elizabeth David’s Mediterranean Food.
But nowadays there are chicken livers everywhere.

I can buy them at the Mercat d’Olivar by the kilo and at supermarkets I can get seven or eight little plastic tubs. On any day of the week I can find enough chicken livers to make pâté on a small commercial scale…if I wanted to.

The same thing used to happen with shin of beef, which is called morcillo in Spanish. The housewife or cook who went early to the Olivar market could usually find a small chunk for adding to a cocido, the Spanish hot pot I wrote about in the restaurant review on November 27 that contains beef, poultry, ham and other charcuterie including black puddings, chorizos, chickpeas and an assortment of vegetables.

But you’d never find a kilo of it. There simply wasn’t enough for everyone, so butchers tried to please as many customers as possible by doling it out in smallish pieces.
But nowadays you can find morcillo everywhere. Some butchers bone out the shin, cut it up into little chunks and sell it as stewing meat.

Some bone an impressive large and thick morcillo from the back leg and have it on show, either for selling it whole or sliced into thick steaks for stewing — or for simmering in an English-style dish of boiled beef and carrots.

And there are even a few butchers who slice the shin up into steaks with the nugget of shin bone in place (complete with its delicious circle of beef marrow) and sell it for making a dish of Italian osso bucco. In the old days an osso bucco meal simply wasn’t on the menu for anyone.

By the way, don’t get morcillo (the shin of beef) mixed up with morcilla except, perhaps, in a cocido: it is a Spanish black pudding with a rice or onion filling.

The most famous of the rice morcillas come from Burgos. It is the Spanish black pudding that most resembles an English one. Largish ones for slicing are available at El Corte Inglés and Mercadona, and small versions are at the supermarket of El Corte Inglés in the Avenidas (but not at the store in Avda Jaime III).

Some mainland Spaniards refer to the morcillo as the jarrete, although others use that word only when talking about lamb shanks — which are still extremely difficult to find at butcher shops and supermarkets.

Apart from Mallorcan and Spanish friends who use chunks of morcillo for cocido or for making a stew, I don’t know anyone who does anything especially interesting with this cut — excluding a few who have a regular date with an Italian osso bucco.

One of the problems of doing a good osso bucco is that the slices of shin of beef come in very uneven sizes: in some supermarkets they are sold wrapped in pairs, but one is huge and the other is small. That is most inconvenient when you’re cooking for two adults.

But about two years ago I started to notice that some butchers have started to sell packs with two pieces of osso bucco of roughly the same size.

A couple of places at the Mercat d’Olivar sometimes have osso bucco of the same size, as does the Bip supermarket at the start of Ramon i Cajal, the street that exits from the Plaza Hornabeque going towards Terreno.

Another good place for buying osso bucco is one of the few butcher shops in central Palma. It’s called Rocha and it’s at the top end of Avda Argentina, directly opposite the Sant Sebastià church.

They sometimes have trays of osso bucco all of roughly the same size. They have a good choice of other cuts that are nicely displayed and they also have a charcuterie and cheese counter.

It’s worth checking out if you’re in that area — such as when you’re having the superb €12.50 menú del día at Sa Goleta on the other side of Avda Argentina, which is one of the best value menús del día in Palma.

But you will mostly see morcillo that has been boned and cut up into chunks or smaller pieces for stewing, because that is how the Mallorcan housewife is most likely to use it.

When buying morcillo it pays to know if the meat came from the front or back leg. Just as a leg of lamb is much bigger and meatier than the shoulder (the front leg) so the morcillo from the back leg is wider, heavier and generally better in every way.

When boned, the shin is of an irregular quadrate shape, tapering off at one end, or what is known in geometry as a trapezoid.

An animal’s back legs are thicker and stronger because they do most of the work. The back leg muscles are longer and more resistant and they contain more connective tissue and very little fat. 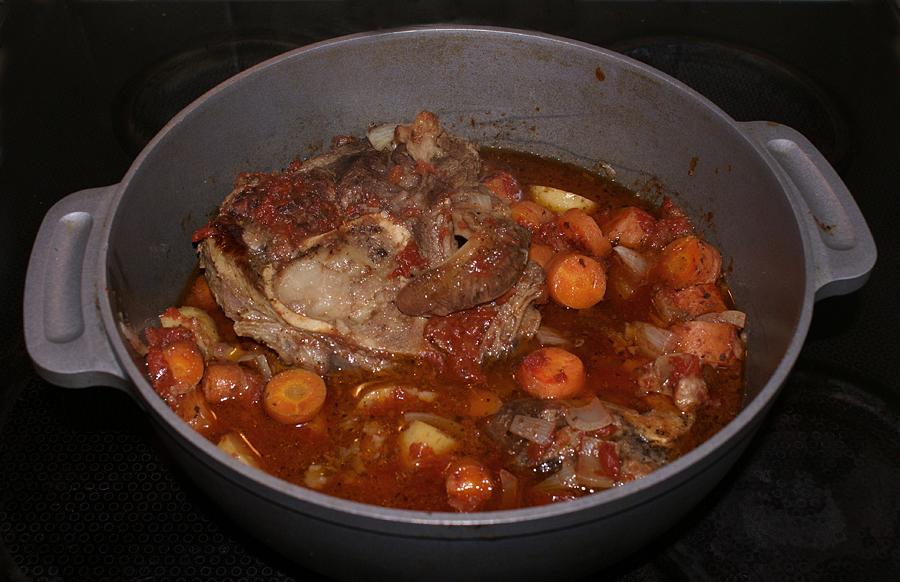 If the shin on the counter isn’t very big and is narrow rather than wide, it is almost certainly from the shoulder and not the back leg.

Both cuts make great eating but the rear shin will always give better results. Its fibres contains more gelatine and that gives the back leg shin extra succulence.

So get the rear shin when it’s available but don’t hesitate to take the front one because you’ll also get wonderful stews and casseroles from it.

The shin has splendid texture and flavour, but because it can’t be fried, grilled, sautéed or roasted it is graded as a second class meat and is therefore relatively economical.

But there is nothing second rate about the dishes we can make with this delicious cut of meat, especially when cooked slowly with wine, onions, leeks, tomatoes and other veggies.

The texture of the shin is so juicy, tender and tasty when properly cooked that it is even most enjoyable when simply simmered in water with vegetables and herbs. But you must never overcook it.

A piece of shin, with or without the bone, takes a long time to become tender. But excessive stewing casseroling or simmering will reduce it to a mass of tasteless fibres. Correct timing, regardless of the cooking method, will give an incredibly succulent dish.

About 30 years ago Juan Marí Arzak, the first Spanish cook to win three Michelin stars, started to use cheaper cuts of meat and offal at his restaurant in San Sebastian. One of these was zancarrón de ternera estofado, stewed shin on the bone.

Arzak took an osso bucco slice of shin and stewed it slowly with vegetables, merlot wine and oloroso sherry. He served it with black wild rice and creamy green rice, the colour coming from liquidised parsley and spinach.

Spanish housewives don’t handle shin of beef in such a refined and elegant way. They make hearty rustic stews with it, using lots of veggies including potatoes. Sometimes potatoes are served separately, either boiled or sautéed in olive oil or lard.

Spanish housewives sometimes buy a whole back-leg shin and cook it as a casserole. Done like this, sliced and served with vegetables and potatoes, it is more than enough for 6-8 — with some leftovers for making croquettes, depending on the weight of the shin and individual appetites.

In Galicia they marinate a whole shin in white wine with salt and a head of garlic sliced across in two. It is drained, dried with paper towels, and sautéed in an earthenware cazuela with a couple of dozen peeled fresh cocktail onions.

The marinade with the garlic is added and the shin is simmered slowly, covered, until it is half cooked. Small peeled potatoes are added and the dish is finished off in the oven.
When ready, the meat is sliced and served on a platter surrounded by the potatoes. The sliced meat and the potatoes are well lubricated with the reduced marinade. A simple dish but most effective and satisfying.

The traditional Italian osso bucco, as served in Milan and other parts of Lombardy, should be done with the back leg shins of young animals — in other words white veal, rather than beef.

I’ve never seen veal shins at any Palma butcher, so those of us wanting to do an osso bucco have to use shin of beef. Those from the front leg will be smaller and will look more like a real Italian osso bucco.

Have the pieces of osso bucco sliced to your desired thickness with the bone and its marrow surrounded by the meat. Using a frying pan or a saucepan large enough to take the slices in a single layer, sear them on both sides in a mixture of butter and olive oil and transfer them to a plate.

Put the sliced osso bucco back into the frying pan in a single layer and pour in enough red wine to just come up to the level of the meat. Simmer, covered, for 90 minutes or a bit longer, depending on the thickness of the meat.

In Milan and other parts of Lombardy, the osso bucco is traditionally served with a risotto alla milanese, for which I’ll give a recipe in tomorrow’s food page.