Many British people over a certain age should have fond memories of wine and cheese parties because they were very popular from the mid-1960s to the early 80s. Wine and cheese are perfect partners and you don’t have to be a gastronome to appreciate them — which is why these parties became so fashionable.

But like most fashions, the wine and cheese party was eventually overtaken by something else: in this case, the beef fondue party.

Many people still end a meal with a small selection of cheeses and a special wine or two, but a get-together in which wine and cheese, plus a selection of breads and biscuits, are the only foods on the table, is very much a thing of the past.

That’s a pity, because nowadays the choice of good Spanish wines at reasonable prices is better than ever before and in Mallorca we now have a superb variety of cheeses to choose from.

Not all that long ago it was impossible to organise a proper wine and cheese party in Mallorca: we had the wines but very few cheeses were available. A few British people, however, did manage to organise these parties because visitors from England brought the cheeses out with them.

Most memorable parties were made up with a dozen cheeses, half a dozen or more bottles of good Spanish wines, some nice bread and biscuits and a congenial group of friends. And no one had to do any cooking.

But now is a good time to bring back the wine and cheese party. Dozens of fine Spanish and imported cheeses are now available at El Corte Inglés, other specialised shops, the Mercat d’Olivar and the Santa Catalina market.

Add to that hundreds of good Spanish wines at very reasonable prices and the makings of a memorable wine and cheese party are at hand without going any further than the centre of Palma.

There are two kinds of wine and cheese parties: the stand-up affair and the sit-down one.
A stand-up one is usually a multitudinous and social occasion with everyone milling around tables laden with cheeses and bottles of wine. The cheeses, the wines and the laid back ambience stimulate conversation on all kinds of subjects.

It is more gastronomic than social and the wines and cheeses are the main subjects of conversation. It’s a serious occasion and social badinage comes to the fore only when the merits of the cheeses and wine have been fully discussed.

Although I haven’t been to a wine and cheese party in recent years, I have on many occasions finished a light meal with a selection of cheeses and a couple of appropriate wines. But these are wine and cheese tastings rather than parties. 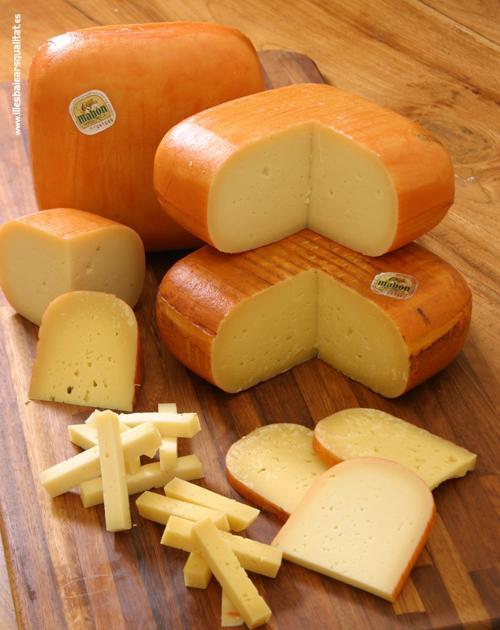 Those attending a wine and cheese party are more interested in eating their favourite cheeses and perhaps discovering one they don’t know. They are not interested in matching wines and cheeses.

When it comes to taste, of course, there are no rules — and that’s what makes the pairing of wines and cheeses so interesting and reassuring: everything you say is your opinion and in that you can never be wrong.

A proper tasting by connoisseurs is a great opportunity for learning something new about wines and cheeses And there us so much to learn, because they vary in aromas and flavours from year to year: they always have something different to say to us.

A wine and cheese party calls for a good selection of cheeses. You must have a few of the Spanish hard cheeses such as Roncal (the first Spanish cheese to receive Denominación de Origen status), a piece of Idiazabal and a fully cured Manchego. 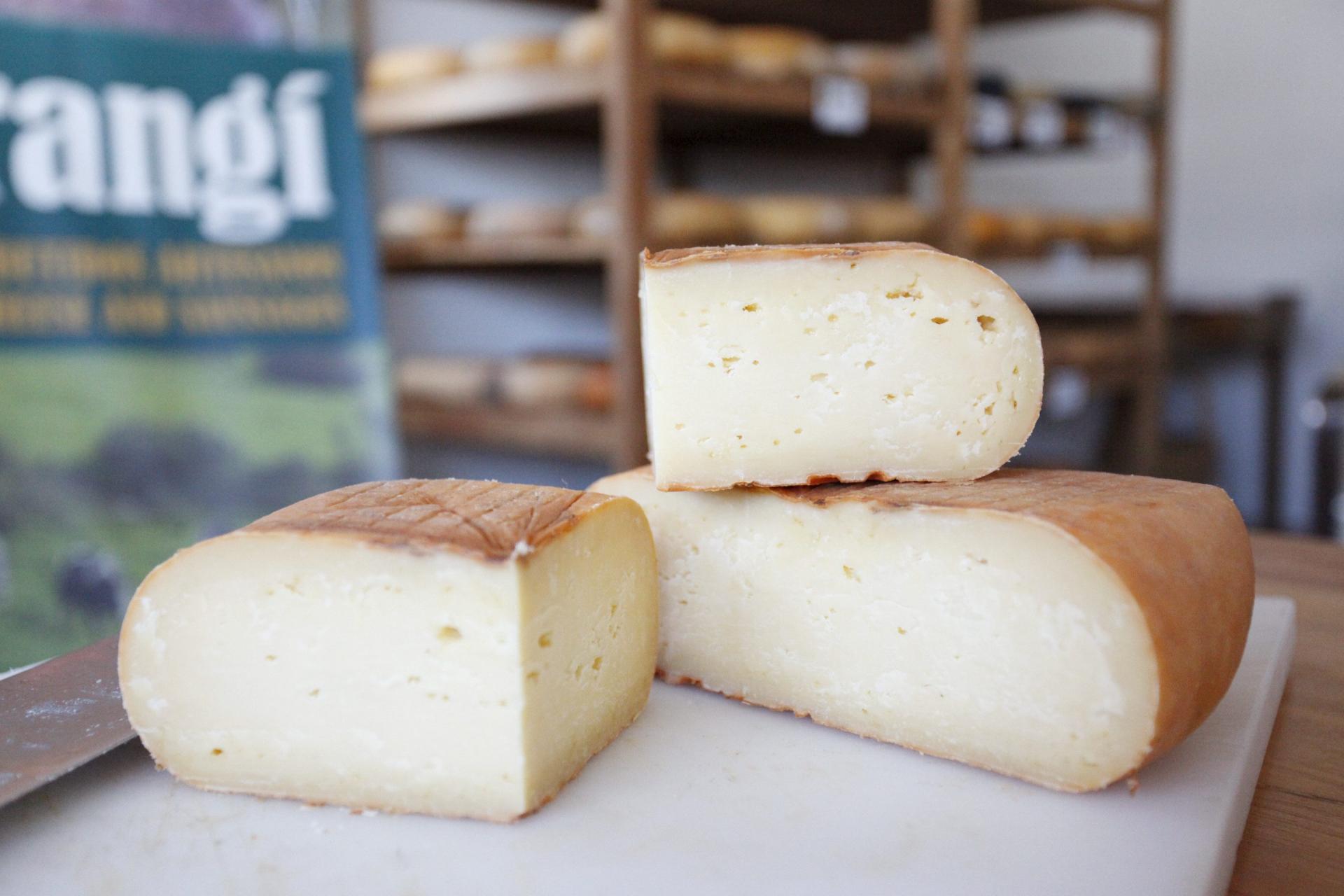 You should have at least two blue cheeses and you can choose from stilton, roquefort, gorgonzola, Spain’s cabrales and perhaps Germany’s cambozola or one of the other lesser known blue cheeses.

The matching of wine and food is always highly subjective so there are never any hard rules about which wines to serve with cheeses. Even so, there are a few general guidelines and it helps to know them.

Young fresh cheeses made with cow’s milk or sheep’s milk, such as the very white burgos on sale at every supermarket, call for very young whites and reds. A cava would also be suitable. With a fresh goat’s cheese you should try strongish whites from Rioja, Rueda or Penedès. A merlot is another possibility. 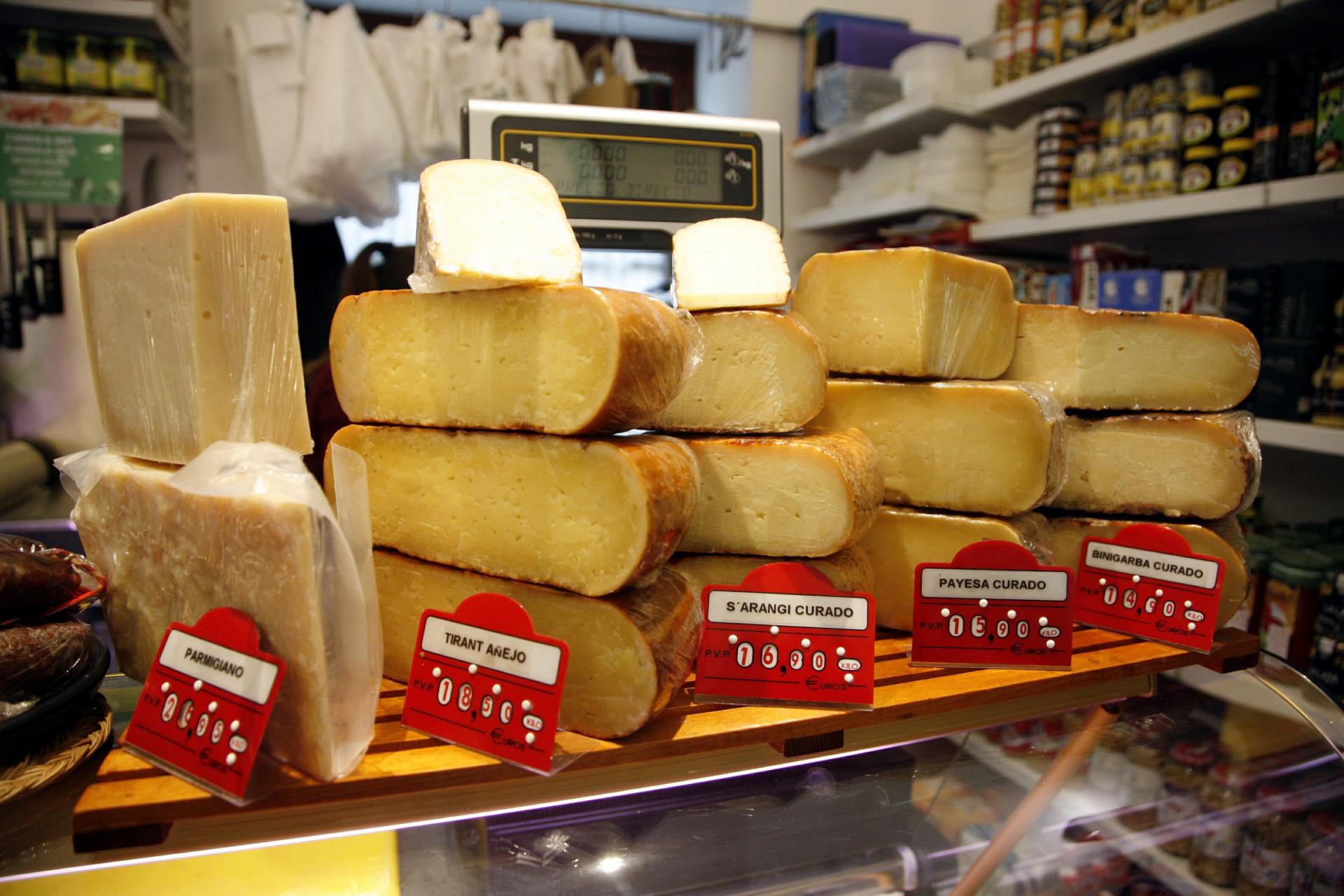 Semi-hard cheeses that have been cured for 3-6 months, such as those from Castilla or Zamora, should be a good match for wines from La Mancha, either young reds, or reds that have been oaked for three months.

If the cheese has been cured for more than six months you should try a strongish red from Rioja, Ribera del Duero or Jumilla. Sweet wines would be another possible choice, either a Pedro Ximénez, sauternes, moscatel or port.

Cheeses with soft textures but strong flavours are good with lightish reds from Rioja, Ribera del Duero and Costers del Segre. The above sweet wines make an interesting alternative. 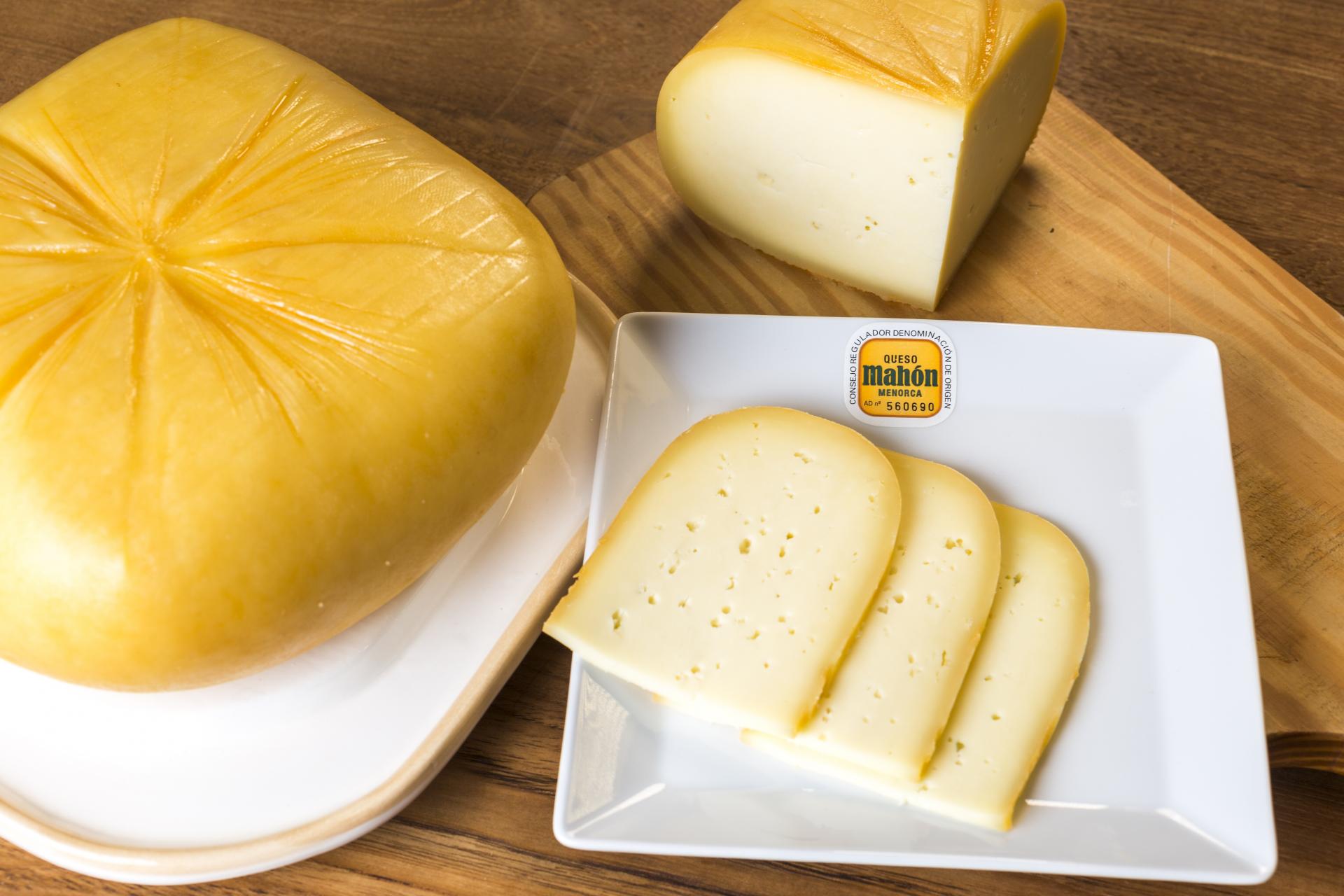 Hard cheeses that have been slightly smoked (such as Roncal or Idiazabal) call for crianzas from Rioja, Tarragona or Campo de Borja.

Blue cheeses such as Asturia’s cabrales, roquefort, gorgonzola or stilton, need strong reds with lots of character from Rioja, Priorato or Ribera del Duero, but you could also try amontillados or generosos from Jerez. Sweet wines such as Pedro Ximénez, port or sauternes are often best of all for blue cheeses. 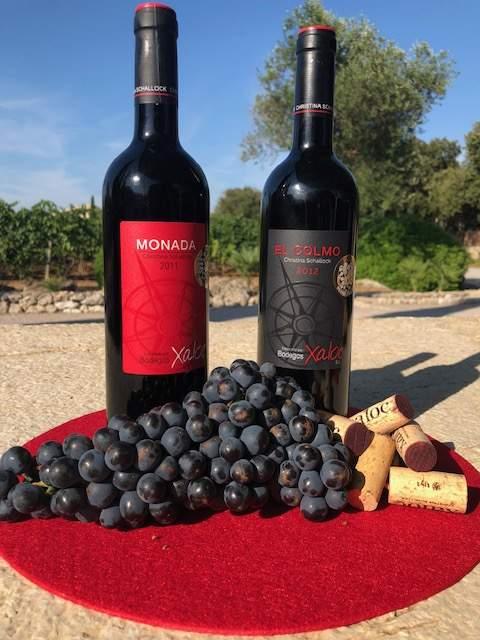 About 20 years ago, I attended a five-day wine tasting course during which we tried everything from the youngest whites and reds to the most noble of Rioja’s gran reservas. With the latter we were given roquefort as a possible match — but it overwhelmed the gran reservas.

We were then given a glass of Pedro Ximénez, one of those sweet sherries as thick and dark as Californian syrup of figs. It was the perfect match for that roquefort. Since that day I prefer my blue cheeses with sweet wines.

I haven’t been to a serious wine and cheese tasting since about 1980. If anyone these days gives a serious tasting, there’s a good chance it will be completely different from the last one I attended.

That’s partly because sommeliers and other wine experts now think that red wines are hardly ever a good match for cheese of any kind. Their new take on pairing cheese doesn’t even always include an alcoholic drink.

As long ago as 2006, the University of California at Davis, one of the world’s great centres for wine research, 11 expert wine tasters found their palates were dulled when they ate a range of strong and mild cheeses with eight reds of varying quality. 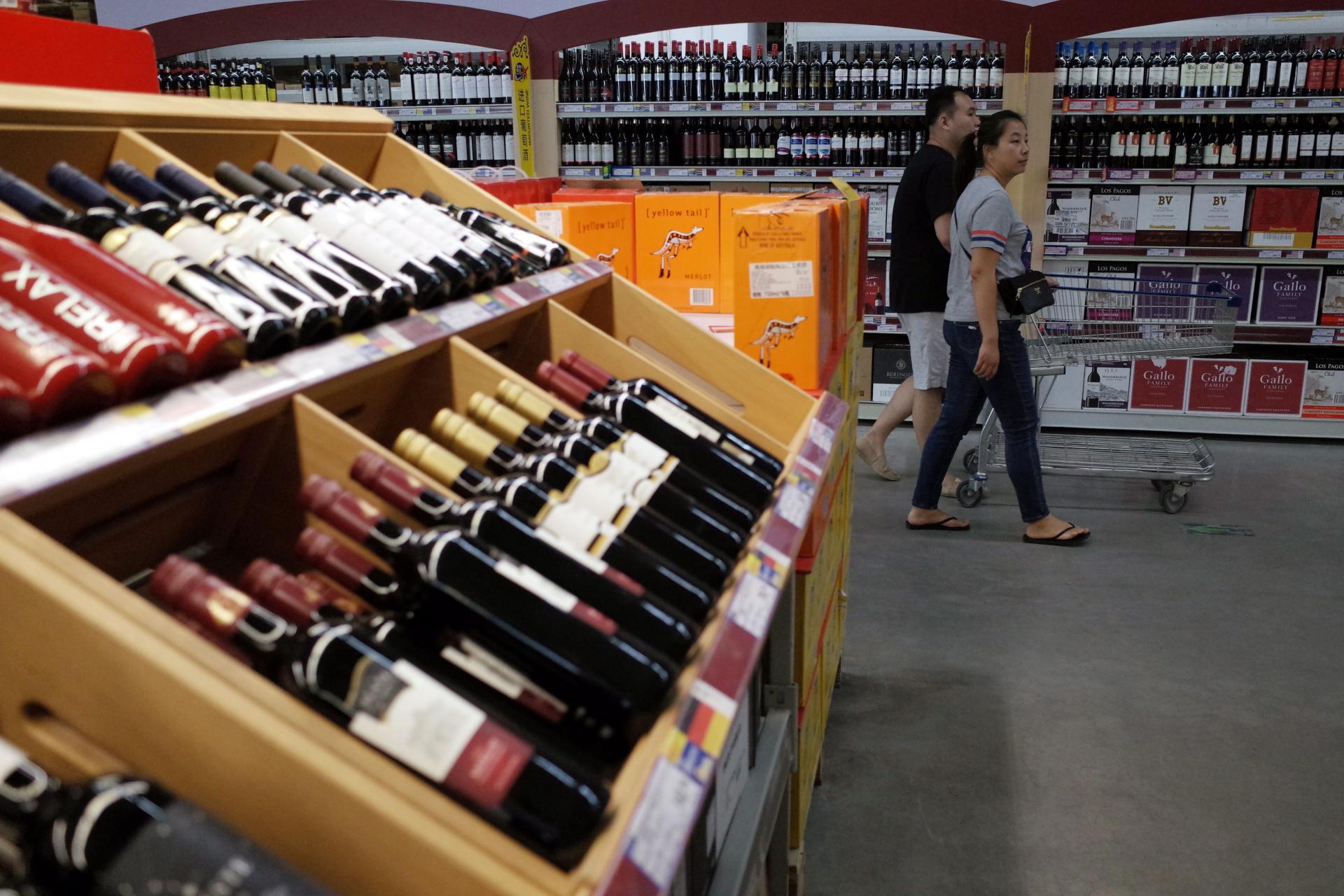 The team at one point took a nibble of eight cheeses ranging from stilton and gorgonzola to mozzarella and emmental.

The tasters, who were drinking economic supermarket wines plus expensive vintages, said the cheeses suppressed almost every flavour including sourness, astringency, berry and oak.

The only aroma enhanced by the cheese was a buttery one, the researchers found. Stronger cheeses appeared to mask the wine flavour more than milder ones.

The research wasn’t about good and bad pairings. It was looking at how cheeses may or may not affect the flavour of the wine.

The research suggested fat from the cheese may bind to flavour molecules in the wine, or that the fat might coat the mouth and dull the tastebuds. This was among the first published scientific research into food and wine combinations.

After a report was published, wine experts and wine scientists all over the world started to take a new look at how drinks combined with cheese. Some 12 years later we were hearing about rather strange pairings.

Some sommeliers found that brie de Meaux tasted better with a cold red vermouth that helped to deal with the greasy feeling on the palate caused by the soft creamy brie.

An Asturian cheese called lazana, made with non-pasteurised cow’s milk, is said by some to be best with a gin and tonic — the salinity in the gin harmonises with the cheese crust and the citrics and the bubbles cleanse the mouth.

One of the more unusual pairings took place with a cheese from the Canary Islands called alegranza. A Spanish sommelier recommends hot green tea because it brings out flavours such as vanilla or cardamom.

He also said the contrasts of temperatures produced by the hot tea give taste sensations we are not used to.

You’ll find another strange and somewhat bizarre match in France: coffee is paired with brie noir, a cheese that has been cured for at least two years.

Some say it’s not such an odd match because cheese is a lactic product, so this brie and coffee is just another form of coffee with milk. 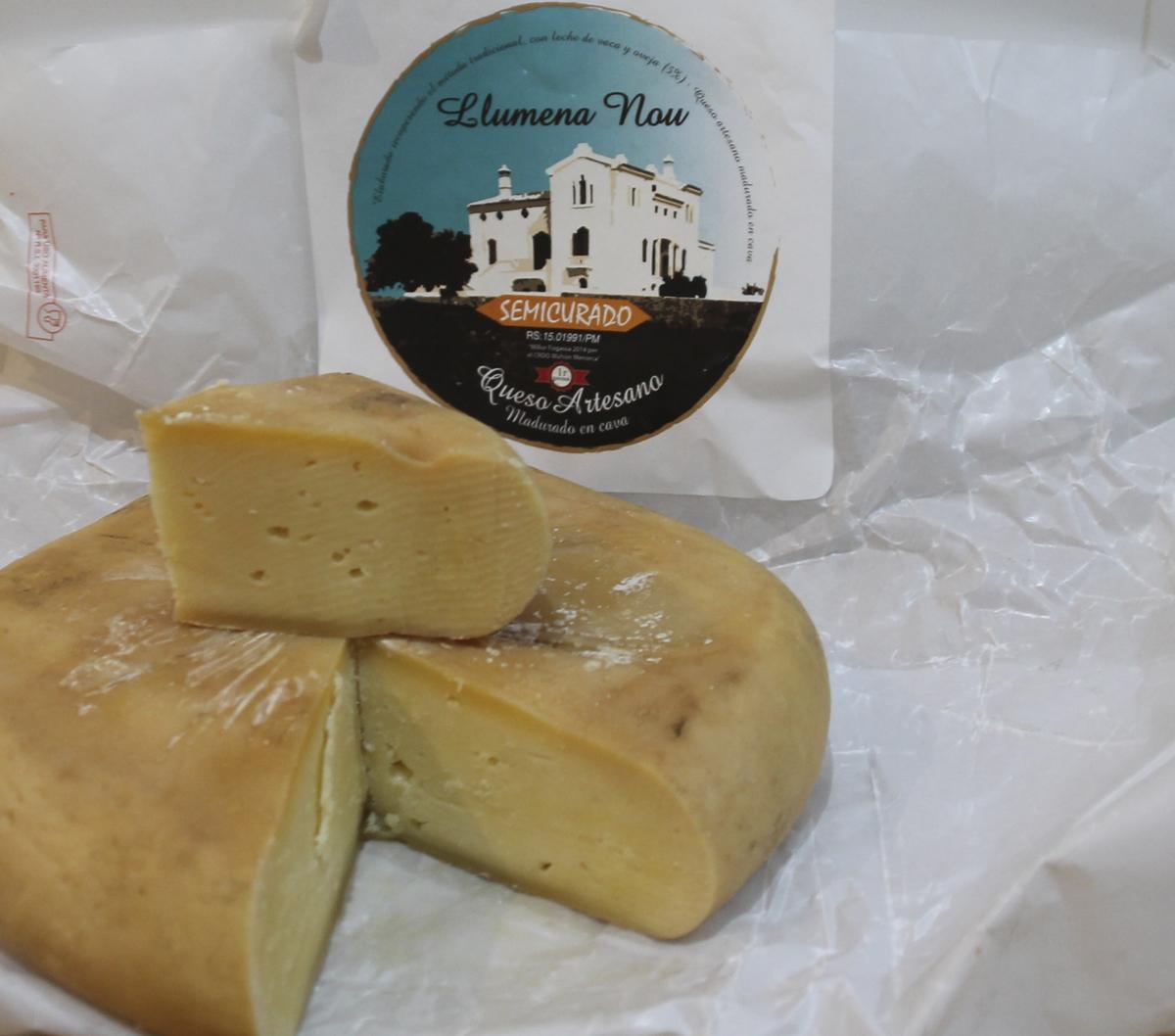 Well, I shan’t be rushing to try any of these eccentric matches. After many decades of eating cheeses with wine, I still haven’t become bored with the taste sensations I keep discovering, so I shan’t be attending any green tea and cheese parties.