Quail - Full of flavour, simple to cook and easy on the pocket

In Mallorca, the birds are stuffed with snippets of sobrassada before being roasted

One of the best ingredients at the municipal markets and supermarkets is quail and it can be used as the basis of dainty and delightful dishes, yet I know of only a couple of people who buy it as a regular treat.

Even my friend Jeff Flood, who as a young boy in Texas had fried quail for breakfast on Christmas Day, didn’t buy it all that often when he lived in Mallorca for more than 20 years.

Quail is one of the best items at the market, yet I know of so few people who buy it. I can’t see why because — among other things — the price is right.

So when we want to make the most of good economical buys, we should take a closer look at quail. 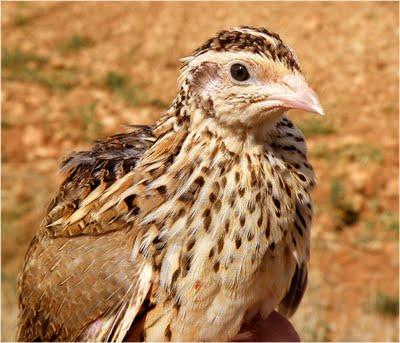 At less than €5 for two quails that have been cleaned, butterflied and are ready for cooking, they are an incredibly good buy.

Quail have another advantage: they are at their best when cooked simply and quickly, so they are ideal for the busy housewife.

With a light and easy starter of some kind (my choice would be 125 grs of spaghetti or linguine per person with a plain fresh tomato sauce and grated grana padano cheese) and one quail, person plus a salad or veggies, you can have a meal on the table with the greatest of ease.

Some connoisseurs say the best way to handle a whole quail is to roast it without any frills other than wrapping it in a slice of fatty bacon to keep it lubricated. It shouldn’t need more than 15 minutes in a hottish oven.

You can also pan-fry it, with a tight lid on to keep the heat in and to stop the fat globules from flying all over the kitchen.

A variation on this cooking method, especially in the grape-growing areas of Spain, is to wrap the quail in vine leaves before tying the slice of bacon round it.

The vine leaves add subtle flavours that turn a simple quail into an haute cuisine kind of dish fit for special occasions.

Cooks with more time to spare, or more advanced culinary ambitions, like to stuff quails despite their small size.

A favourite and simple Spanish stuffing consists of a succulent mixture of finely chopped onions, wild mushrooms and bacon or snippets of salt pork. 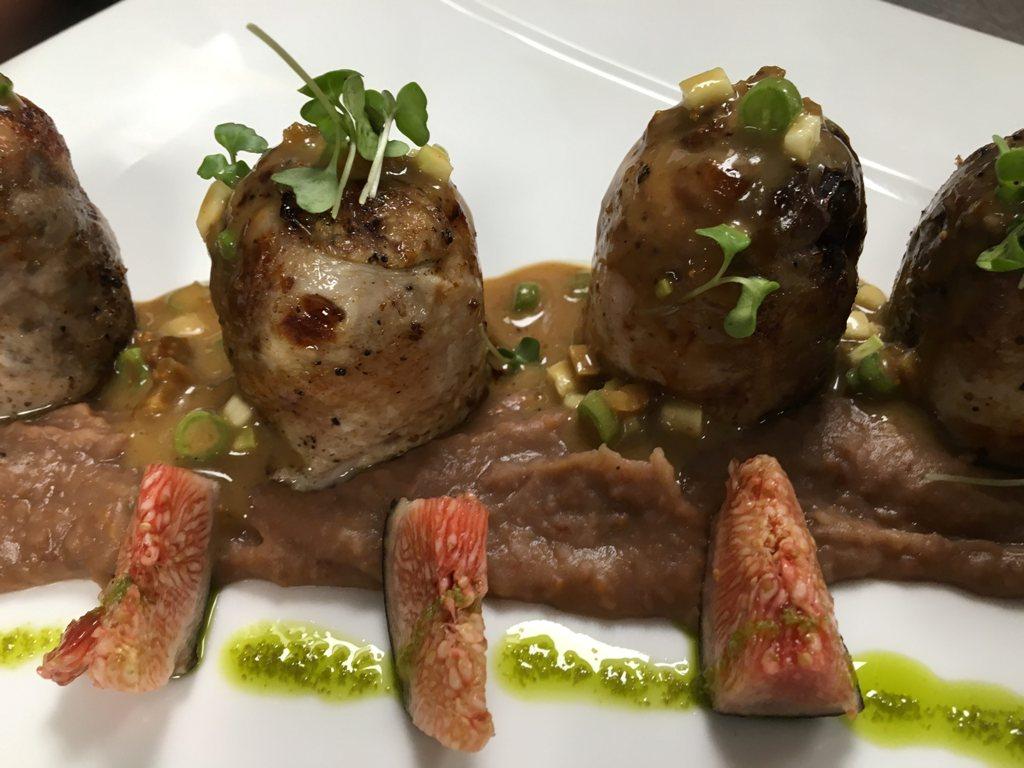 You will get more stuffing per bird if you extract the breast bones. This is easy enough if you buy the cleaned butterflied quail. Spatchcocked like this, the little bones are quickly removed if you use a small sharp knife with a flexible blade.

The only drawback is that the quails have to be sewn right along the breast to keep the stuffing from falling out. If you can sew on a shirt button you can also handle this little kitchen chore.

The Basques have a splendid recipe in which the quails are stuffed with chopped bacon, the bird’s liver, and a small piece of truffle.

They are roasted in a mixture of lard and bacon fat for about 15 minutes in a hot oven. At the halfway stage they are basted with a goodish red wine.

The red peppers with the quail inside are transferred to an earthenware dish and they are quickly heated in the oven before being served on a slice of fried bread.

A favourite way of doing quail in Bilbao is to wrap them in vine leaves, roast them in a hot oven for 10 minutes, take them out, flambé them with brandy and then give them another five minutes or so in the hot oven.

They are served on a slice of bread brushed with olive oil and toasted under the grill. The roasting pan juices are spooned over the quail just before serving.

In Basque wine-producing areas, the birds are stuffed with peeled seedless grapes, wrapped in bacon and simmered in white wine. 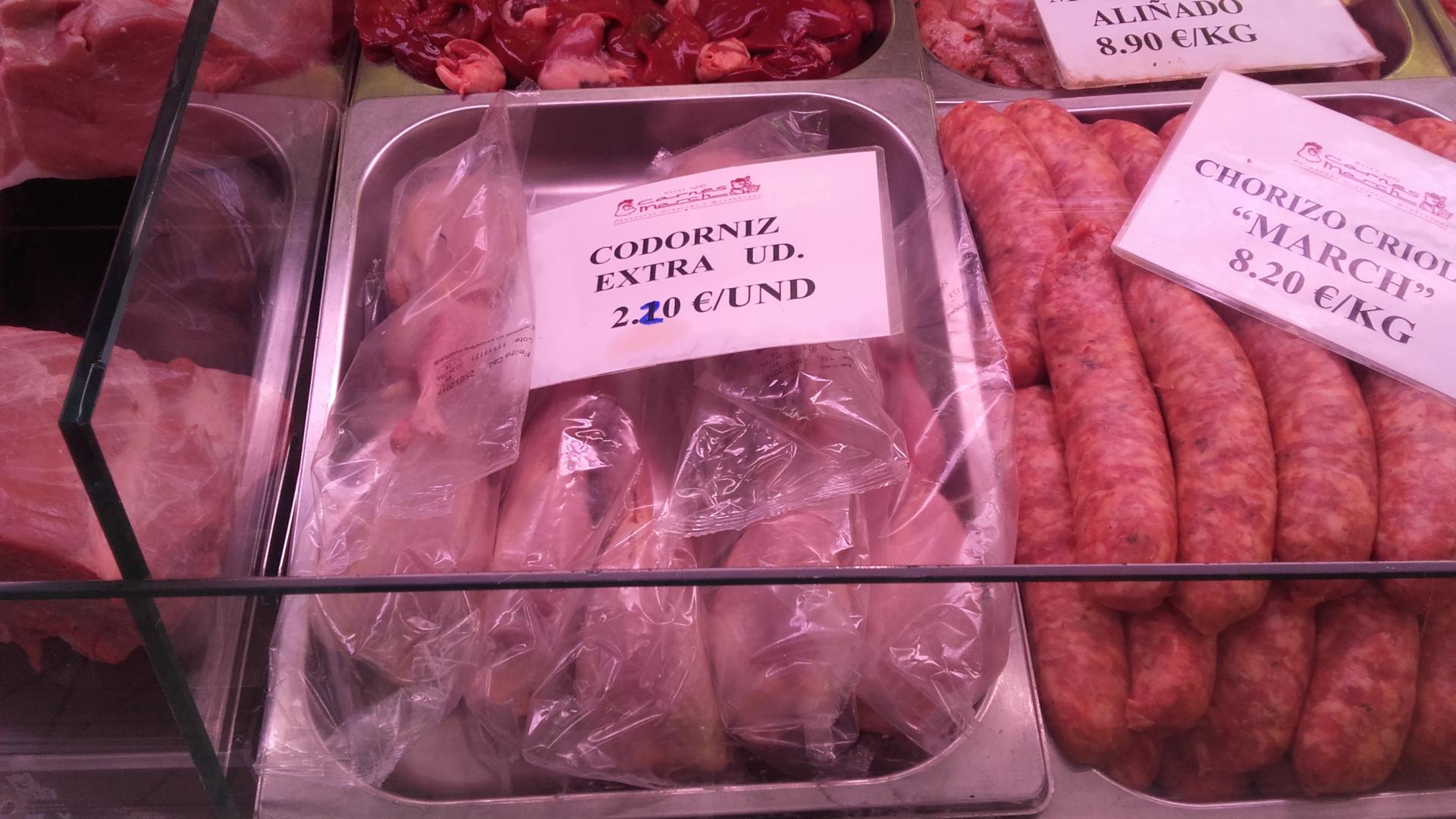 Just before the quail are ready (about 20 minutes) slivers of peeled seedless grapes are stirred into the sauce.

A substantial dish is made in Lerida where the quail, either whole or halved, are put into boiling stock flavoured with parsley, bayleaf, wild marjoram and saffron. Rice is added and the mixture is cooked at a simmer until most of the liquid is absorbed.

A variation on this theme is to make a dry paella-style rice dish, using quail as the only meat. Allow one and a half quail per person plus an extra one or two, and cut them into six pieces. Sear them over a high heat for five minutes in a suitable frying pan or wok and leave them on the side while you make a paella in your usual way.

When the rice has been cooking for five minutes, stir in the quail pieces and cook until the rice is ready.

In Mallorca, the birds are stuffed with snippets of sobrassada and tiny pieces of ‘botifarrón’ before being roasted.

An alternative way of doing them is to cook them in a greixonera with onions, tomatoes, garlic and white wine.

One of my favourite ways of doing quail is an improvisation on a Cantabrian dish I was forced to do some years ago when I was giving a course on Spanish regional cooking.

The recipe was for stuffed quail for which I needed 12 birds. I asked the girl at the meat counter to clean them, and as I was deep in conversation with a friend I didn’t notice until I got home that the interiors had been extracted by cutting the quail down the middle.

As there were two starters and a dessert on the menu that day, I didn’t want the extra work of sewing up a dozen quail. So I made another dish with the ingredients for the original recipe.

I took the bacon for the stuffing, chopped it and sautéed it in a large flattish earthenware cazuela with finely chopped onions, green peas, green peppers, garlic and parsley.
I then put the seared spatchcocked quail into the mixture and sautéed them over a low heat for 10 minutes.

Some dry white wine was added, the cazuela was covered and the quail slowly simmered for another 10 minutes.

What I particularly liked about this dish was its simplicity and the ease with which it was made. Under the circumstances it could have been a stressful little dish but it was a sheer laidback pleasure from start to finish.

I also adored its juiciness even although, in this case, the dish was made in the morning and reheated three hours later for lunch.

The best laid schemes of mice and men don’t have to go astray if we can apply an improvised plan B.

Jerry | about 1 year ago