Mallorca is starting to see some bird migration now

It is the time of year now, when the marshes are full of wintering ducks and waders, and there are two winter visitors in particular that can cause some confusion, despite some noticeable differences - one is the Common Snipe and the other, the smaller Jack Snipe.

Both can be found wintering on Mallorca in good numbers, and there are several records for the much rarer Great Snipe too, all from the Albufera (1989, 1990, 1991 and 1995 respectively). Snipe can be difficult to see when they are perched stock still, where their cryptic plumage can allow them to blend in very well with the surrounding vegetation, which is probably just as well as opportunist predators such as the resident Marsh Harrier will certainly try and take one.

Let’s start with the larger of the two - the Common Snipe (Gallinago gallinago). Both the genus and the specific name both come from the New Latin based on ‘gallina’, meaning ‘little hen’. It has the longest bill proportionate to its body size of any European bird, and during courtship, they fly high in the air before plummeting to the ground, producing a ‘drumming’ sound by vibrating the tail feathers. 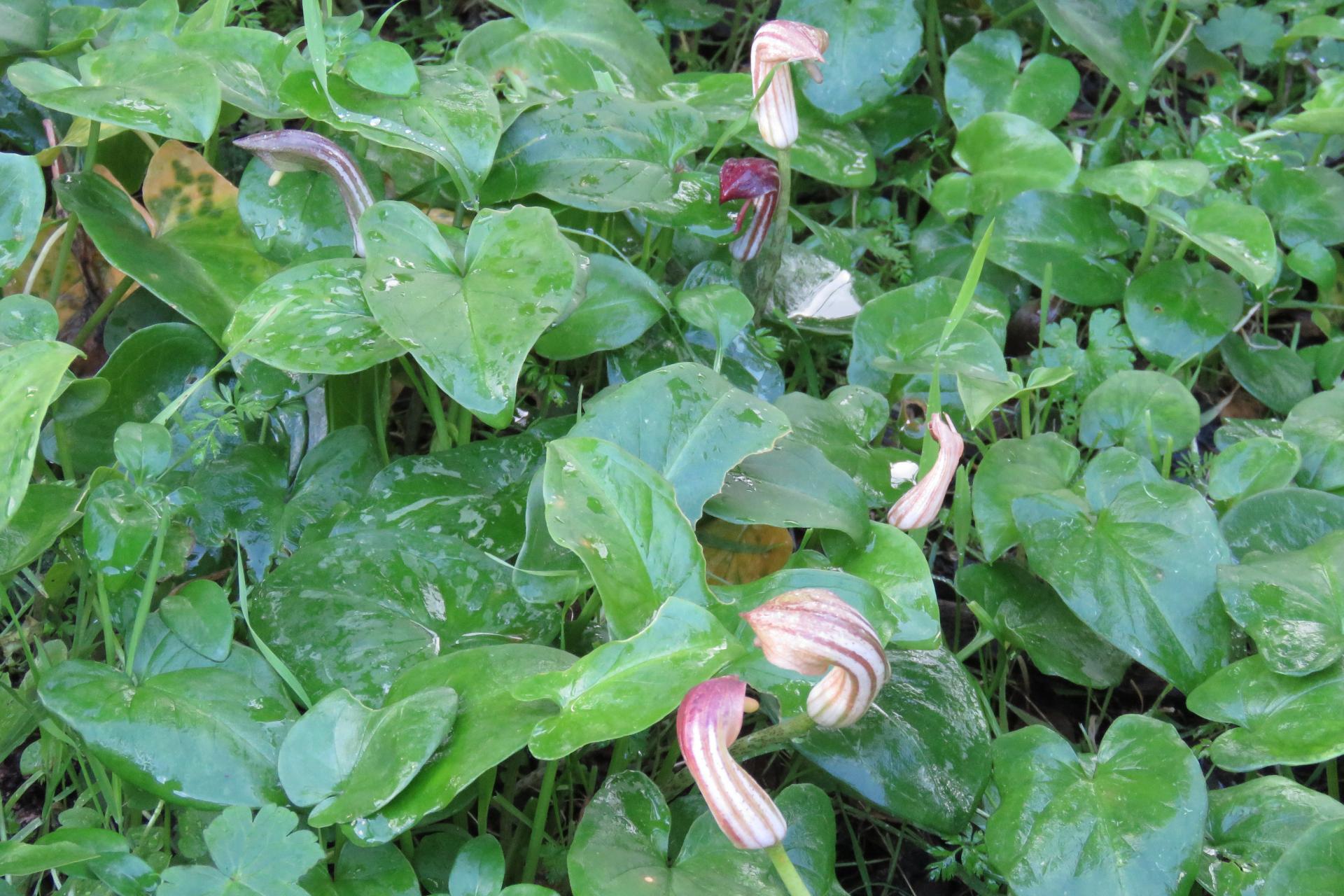 Apart from the distinctive bill, the Snipe also has a characteristic feeding action, unlike that of any other waders. It probes into the soft mud with a jerky action, vibrating the tip of the bill slightly. The tip is sensitive, and food can be sucked up without the need for the bill to be withdrawn from the mud. Generally a solitary feeder, in winter they can form small groups. Both sexes are similar with brown upperparts and pale stripes, with the larger feathers having dark centres and pale margins, which gives a scaly-like appearance. The flanks are barred and the underside is greyish-white. Juveniles are almost identical to the adults.

The Jack Snipe (Lymnocryptes mimimus) sees the genus name coming from ‘limne’, the Greek word for a marsh, and ‘kruptos’, the Greek word for hidden (no doubt in relation to its size). The species name is the Latin for ‘smallest’, and the Jack Snipe is occasionally known as the ‘half snipe (Jack is a common word to describe anything diminutive). There are other features that will distinguish these two species, and the easiest way to tell them apart is by their size.

Other identification features in the field include if they are accidentally flushed. Whereas the Common Snipe will fly in a ‘zig-zag’ pattern and giving off a sneeze-like call, and fly for quite some distance, the Jack Snipe flies in a straight line (usually silent but sometimes giving off a faint sneezing sound), and drops back down into the thick cover usually not too far away. They are a short-billed wader being much more solitary than their larger cousin, with conspicuous pale-yellow stripes running along the back. 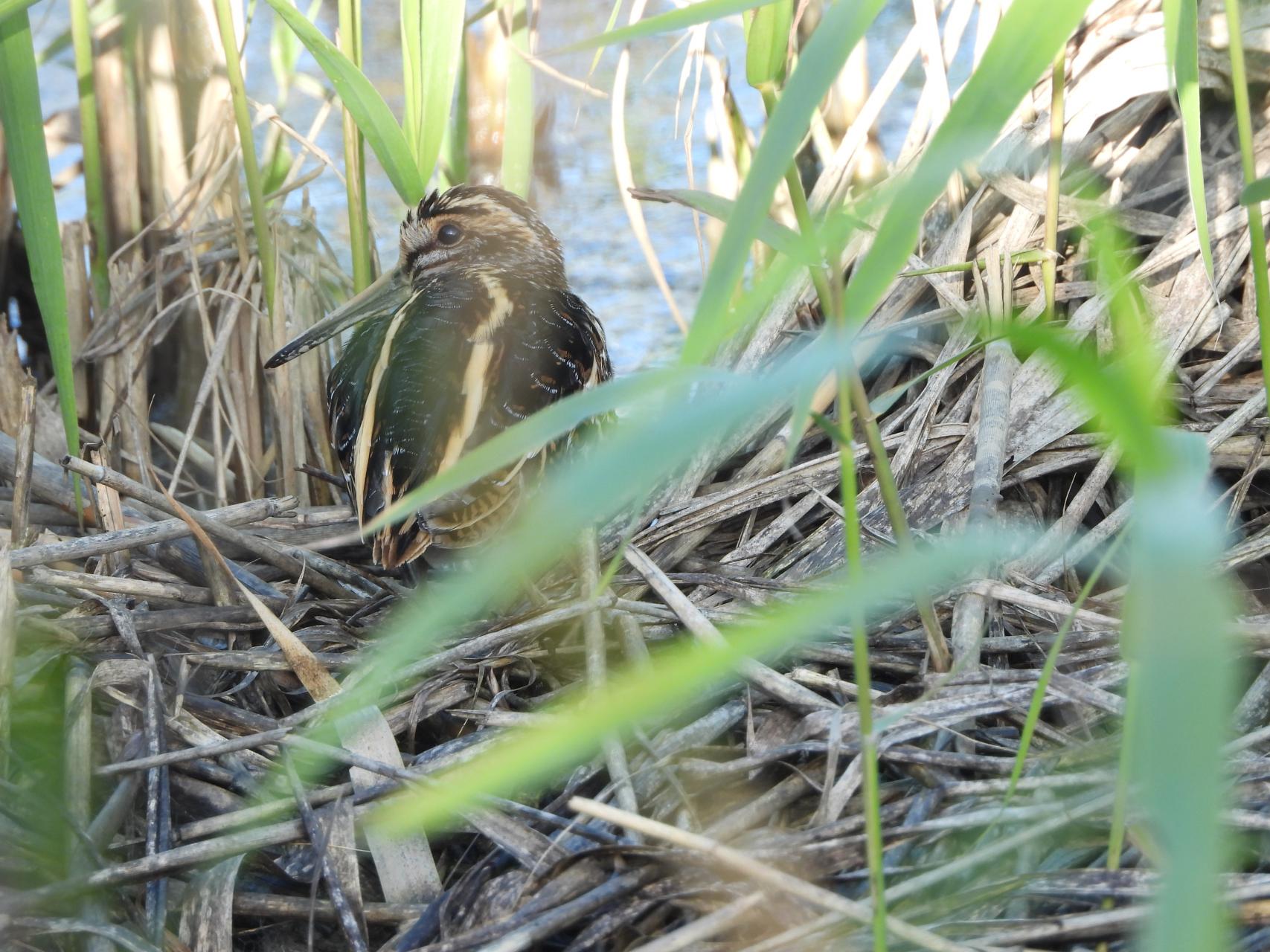 The overall impression is of a greenish-brown patterned back, and boldly marked head. Sexes are similar and it is generally not possible to distinguish juveniles from the adults. If approached too close, they will freeze, but if the threat comes closer still they suddenly shoot upwards, turning slightly and dropping again. At the last moment it will open its wings to brake and then vanish into cover.

The relatively short bill is a good identification feature when seen in flight. On the ground they move awkwardly, with a lot of tail-bobbing and crouching actions. Food consists of Worms, Molluscs and insects taken from within the mud and on the surface.

Fungi can still be found, with several of the Boletus family still growing strong (Son Real and the Albufereta Marsh areas in particular), along with the Oak Curtain Crust that can be seen in groups on the Holm Oaks, and the smaller and often overlooked Oyster Dapperling. In fact, I have only seen this species once on Mallorca, at the Albufereta Marsh on a lone twig near to the far wall by the second viewing platform. A more noticeable species seen growing on Oaks is the Bracket Fungus.

Brownish on top and lighter underneath, it forms a thick, strong fungi that sees the fruiting body eating into the tree itself. But one species I have seen from time to time, especially in the woods around Alaro, is the Orange Birch Boletus (Leccinum versipelle). Associated with funnily enough, Birch trees, and despite the bright orange cap, they can sometimes be overlooked, generally growing alone or in small groups. 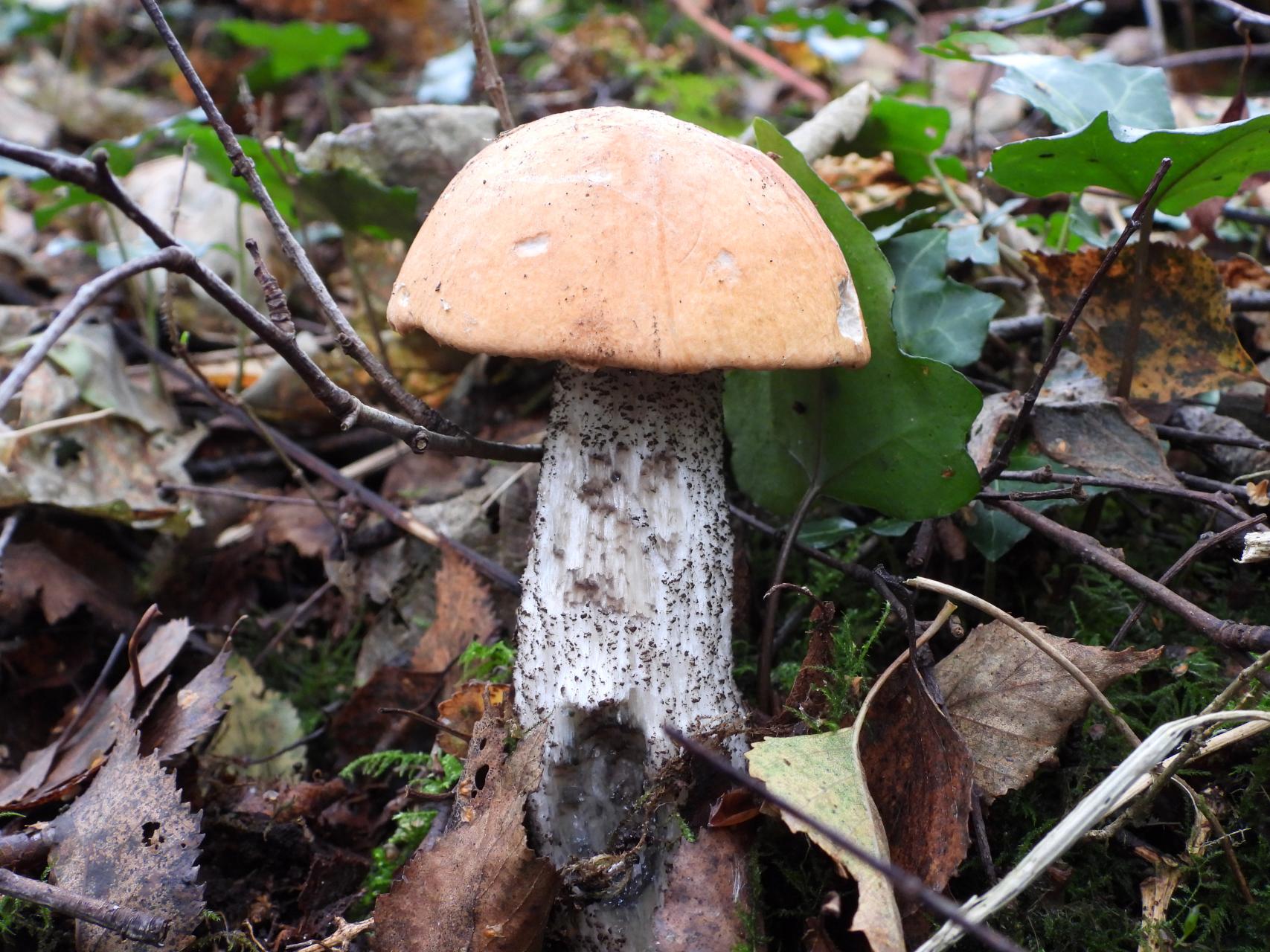 The cap is 3 -6 inches across, strongly convex and an orange to yellowish-brown. The stem is 4 - 6 inches tall usually with a slightly swollen base, white in colour with small, black, granular scales. The flesh is thick and white, but discolouring black when exposed to air. They are mycorrhizal with Birches and Heathers.

Friar’s Cowl (Arisarum vulgare) is one to look out for now, and is one of my favourite plants on Majorca, not because it is large, or particularly colourful, but because of its association with Lluc Monastery, where I first found it growing. It always stayed with me as an iconic plant, as finding it near to the Monastery along the edges of the cobbled walkway, built by the Monks themselves, seemed to give it a nice association. I later found the plant in the guide book, and it was indeed aptly named, Friar’s Cowl.

Flowering from October to April, it gets its English name from the forward bending spathe tube, the spadix is curved downwards at the end. The spathe is fused into a green or reddish-brown striped tube. It is a perennial plant with ovate, arrow-shaped leaves. The spathe is 3 - 5cm long with the upper part hood shaped and covering the projecting naked part of the spadix. The spadix itself has around 4 - 6 female flowers at the base and around 20 male flowers above these. The berries are a soft green.

Cultivated land, waste ground and garigue habitats are where it can be found generally. As I say, I particularly like seeing this plant when I visit Lluc Monastery, where the circular cobbled walk up through the Holm and Turkey Oaks and back down again, sees them growing in groups along the path edges. I also see them a lot along the edges of the path outside the castle walls at Castle de Santuri. 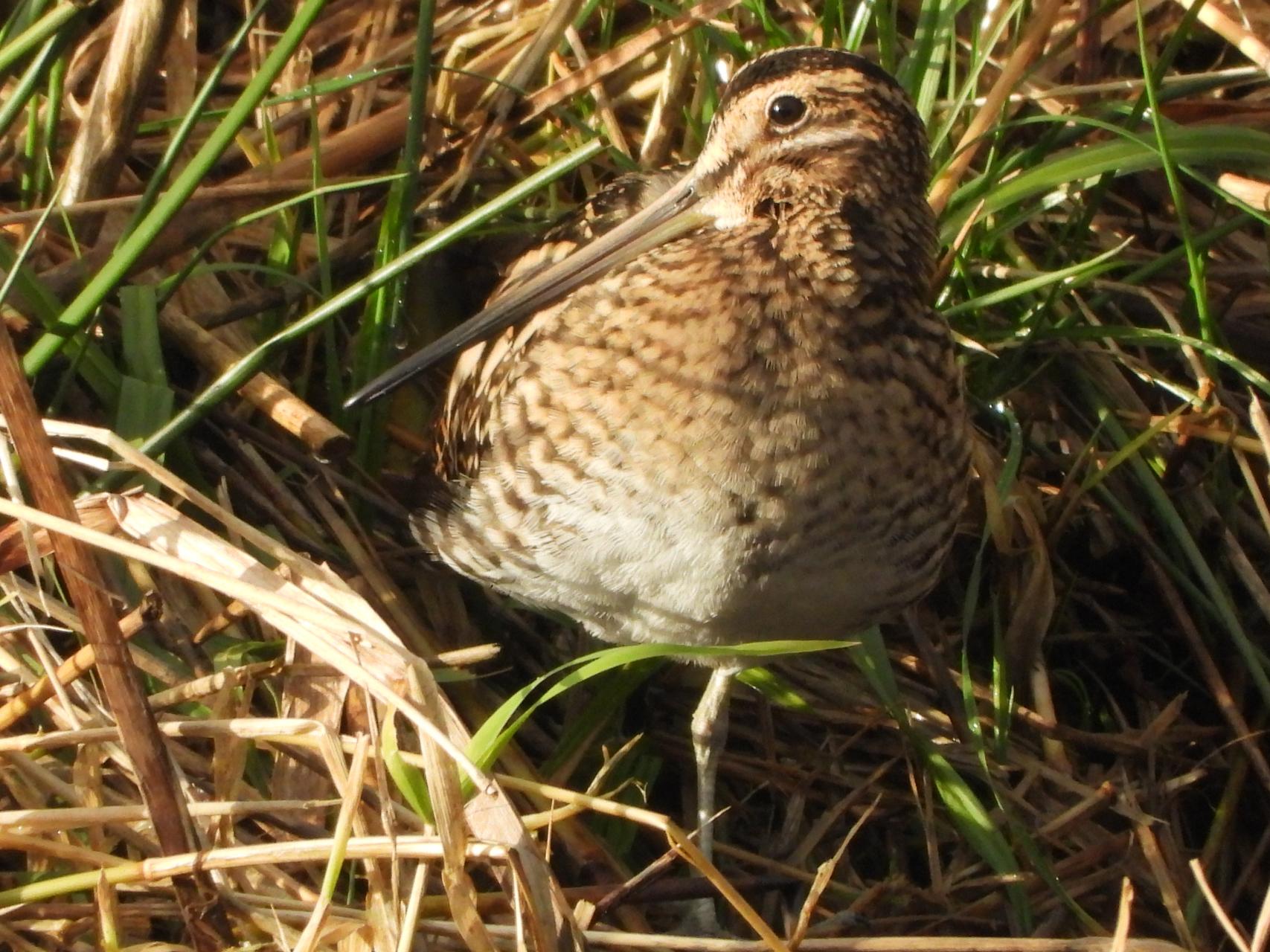 Mallorca is starting to see some bird migration now, and any time soon, Swallows and House Martins will be seen, with warbler species following in behind along with a selection of waders and then the summer breeding specialities such as Eleanora’s Falcons, Bee Eater and Little Bittern to name a few.

Butterflies will be on the wing and the plants will be emerging to start bringing a splash of colour to the landscape - and of course that iconic group of the plant world - the orchids.