Cuttlefish - This cephalopod has just come into season in Puerto Alcudia

Cuttlefish is more of a texture than a taste and it is ideal for eating raw. | MDB files

Ever since producers first started to cultivate vegetables and fruit under plastic, and breed fish in marine farms, seasonal food has been turned on its head: some products, once available for only a couple of months during the summer, can now be bought all year round.

Although several kinds of fish are now successfully farmed, most of them are still very much seasonal and are at their best during certain months.

Between March and the end of May in Mallorca, cuttlefish (sepia) are in season off the coast of Alcudia and splendid specimens are at the Mercat d’Olivar and the Santa Catalina municipal markets.

If you take a walk around either of these two markets you will see stacks of large fresh cuttlefish selling for just over €15 a kilo. Most of them are uncleaned and have skin of a lovely light sepia colour.

Others have been gutted, their stomachs emptied, sometimes of whole fish such as sardines or other small fish, and their skins pulled off to reveal flesh of a sparkling white hue.

Cuttlefish in Mallorcan waters like the Bay of Alcudia and turn up there to lay their eggs at this time of year. Some 80 per cent of all cuttlefish caught in Mallorca are netted off the port of Alcudia.

A two-man fishing boat can set off from Puerto Alcudia at seven in the morning, lay out four 40-metre nets, and by mid-day they have caught about 30 kilos of cuttlefish. On a really good day it can be double that amount.

The nets also bring in a wide variety of other fish including smallish salmonetes (red mullet), escorpora (scorpion fish), araña (we use the French word araignée) plus various small fish that are good for making stock.

Mallorca’s cuttlefish, which can have a lifespan of 1.5-2.5 years, can reach a maximum length of 40 cms, but they are more likely to be 15-25 cms, although there are also much smaller ones.

Cuttlefish, like its cousin the squid (calamar), is often accused of being tough and rubbery. If you have been served one like that then it is the cook’s fault. I have never eaten a grilled cuttlefish that was less than tender. Some of them can be butter soft.

And you don’t have to go to the expensive fish restaurants to eat a fine tender cuttlefish because you will also find excellent ones in tiny bars in Palma’s side streets. 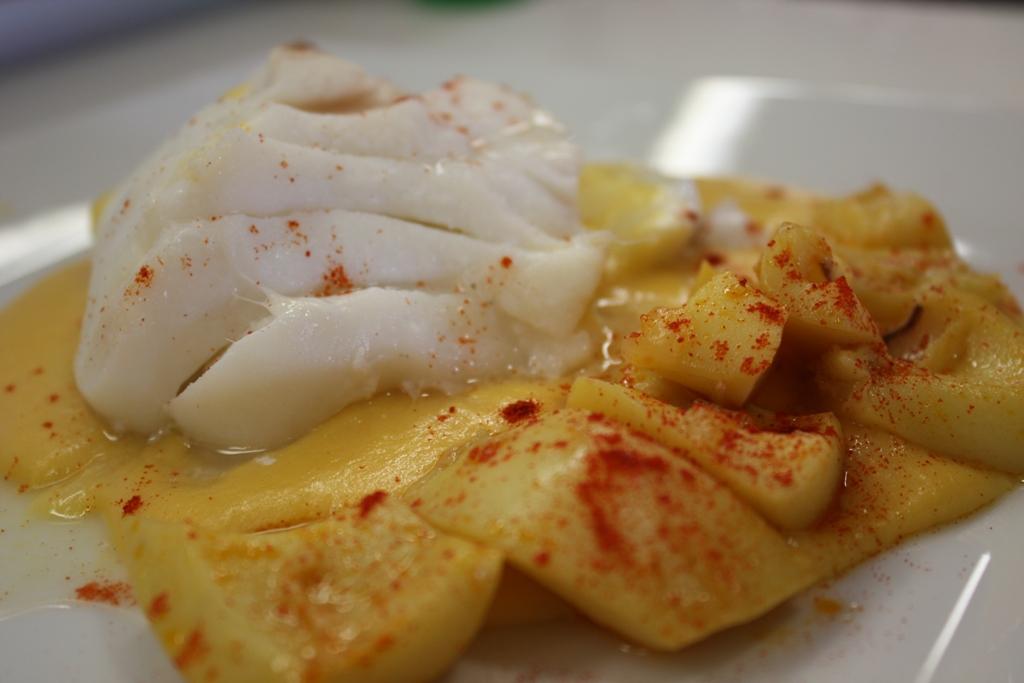 Most cooks use two basic ways of grilling or frying cuttlefish: over a high heat for a short time, or over a low heat for a long time. It couldn’t be easier.

The cook at the tapas bar in the fish department of the Mercat d’Olivar does them by the slow method. I have frequently watched him grill his cuttlefish and I have also timed him.

He puts tapas-size individual ones on the hot plate with a low heat, generously drizzles them with olive oil and leaves them there for 25-40 minutes, turning them at the halfway stage. They are always beautifully tender.

When I do them at home (or a friend’s home) I prefer a scorching heat but an extremely short cooking time. I also get nicely tender cuttlefish. 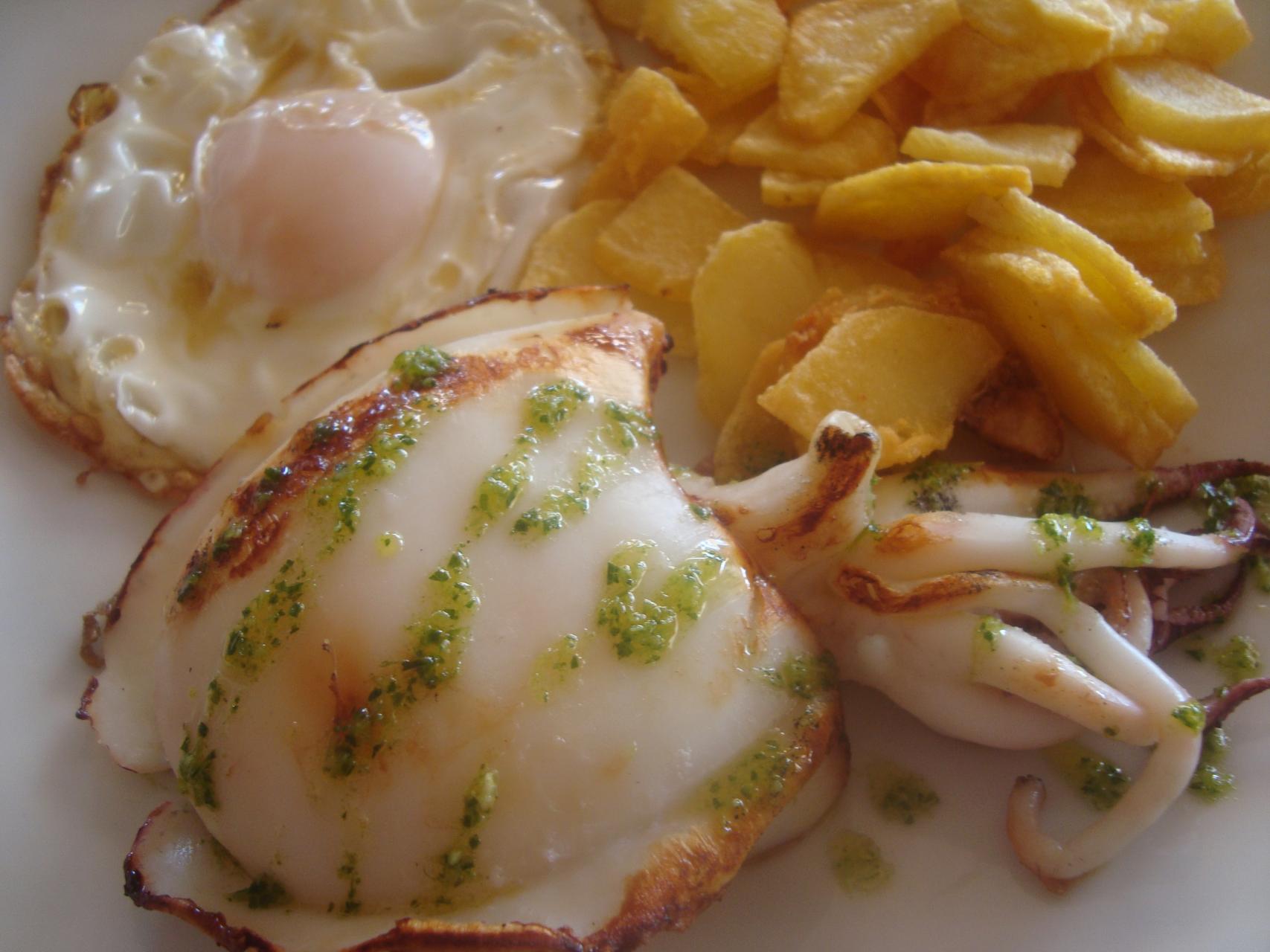 By either method, it is essential that the exterior of the cuttlefish (or the squid, because the same method is used for both) becomes charred, as this adds a lovely taste to the finished dish.

Small grilled cuttlefish are always a good choice in tapas bars when available. They come with well-scorched exteriors, are tender and usually have a nice sprinkling of finely chopped parsley and garlic.

The extra short cooking time is also needed when cuttlefish is used in paella or other rice dishes. Many people, including professional cooks, make the mistake of adding cuttlefish at the start of a paella so that it cooks for too long at a highish heat and becomes tough and rubbery.

You will ensure good results if you lay cuttlefish strips (or rings of squid) on the surface of the rice when it is slightly more than half done. That way the cuttlefish will be cooked through and tender. 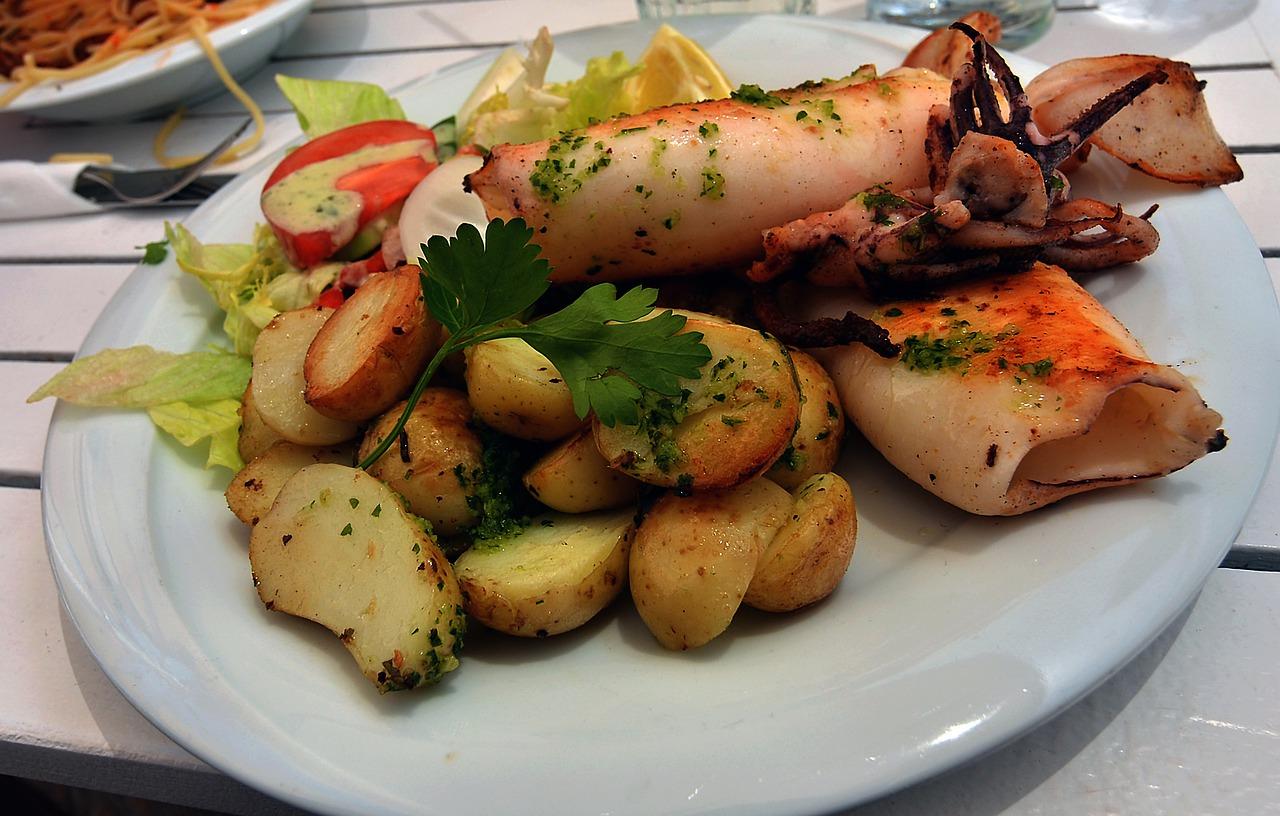 In some bars and restaurants you will come across cuttlefish and squid cooked in their own ink as well as in a rice dish called arroz negro, in which the ink is used to blacken and flavour the dish.

The use of cuttlefish and squid ink is one of the great Basque contributions to Spanish regional cooking. These dishes, as well as others such as chipirones en su tinta, are as shiny and jet black as anthracite coal.

In books and articles on Basque cooking you will often read that this ink-black sauce is unique and there isn’t another like it anywhere.

But sauces of a really black shade (sloe black, as Dylan Thomas so memorably put it in Under Milk Wood) can be found in other countries, especially China. 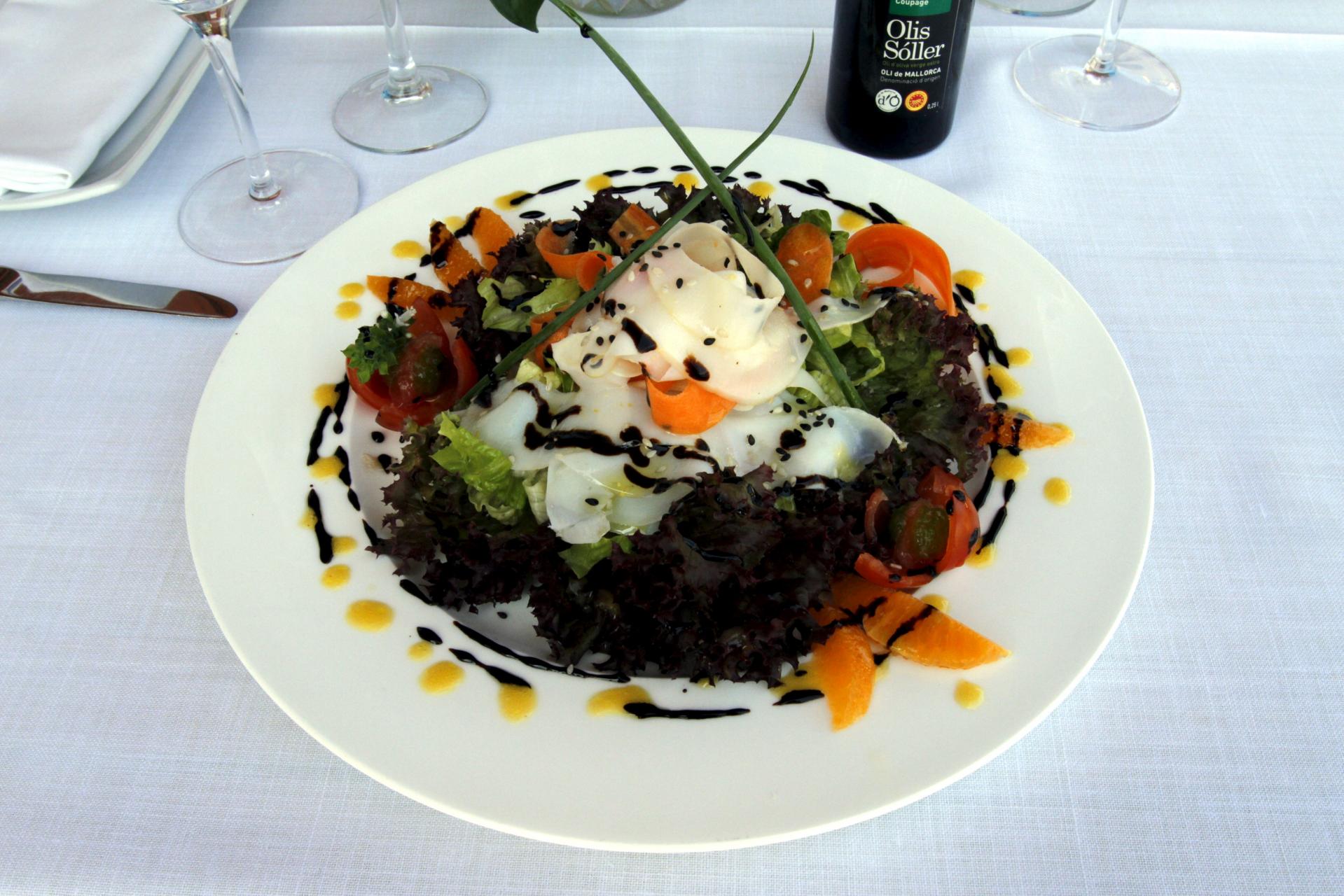 Black dishes, in which ingredients are stir-fried with mashed fermented soybeans, have been a Chinese speciality for hundreds of years. Most experts think the Chinese were the first to use cuttlefish and squid ink. And for a good reason.

The Chinese and Japanese like to dice with death in some of their culinary creations, a good example being the Japanese fugu (blowfish) whose skin and internal organs contain a deadly poison.

Well, the ink cuttlefish and squid squirt as a defence mechanism is also poisonous in about the same degree as the venom of a viper.

But the ink’s toxicity is neutralised as soon as it is heated to 45C, so no dish done in this ink could do us any harm.

We could even use raw cuttlefish ink without any ill effects so long as there were no cuts of any kind on the tongue or inner mouth.

So never consume raw cuttlefish ink if you’ve just had a tooth pulled…but you wouldn’t be doing that anyway, would you? 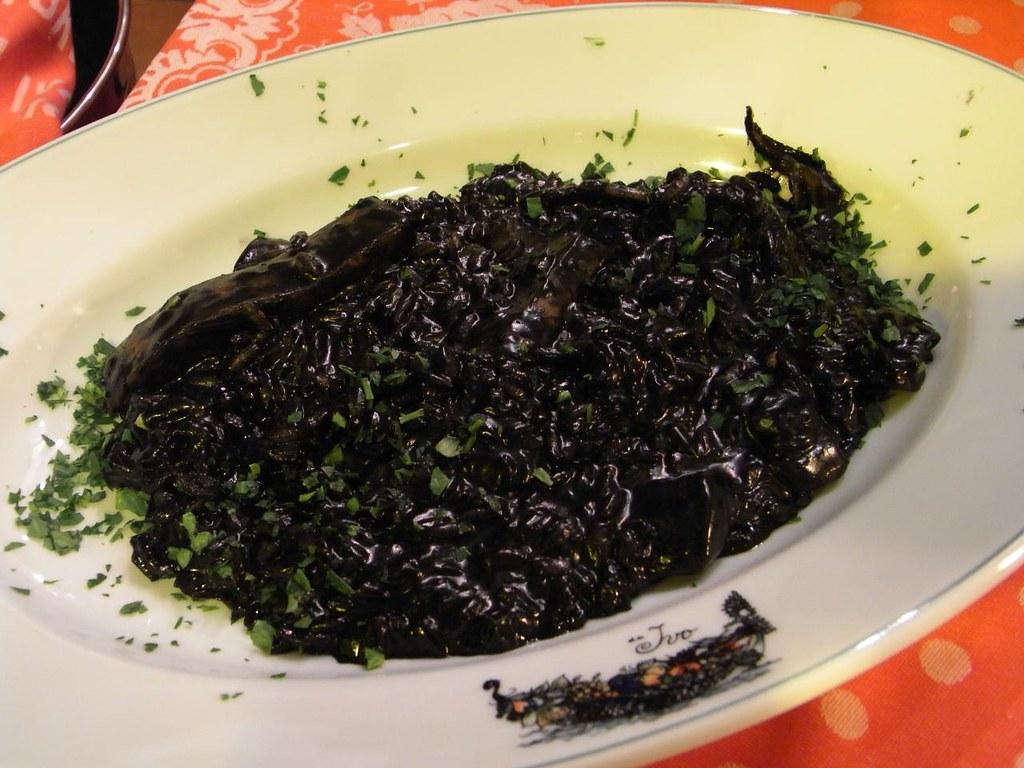 Those Basque food writers who thought chipirones en su tinta is a dish with a unique black sauce, needn’t have gone as far as China to find similar sauces.

They could have found them just down the road and round the corner, so to speak: in Venice, to be exact.

The Venetians do several squid ink dishes including risotto nero, a cuttlefish speciality that uses the ink to great effect.

As the Italians were into refined sophisticated cooking long before the Basques, it is almost certain they were the first western cooks to make use of jet-black sauces.

But it’s not a case of the Basques copying the Italians or the Chinese. The use of cuttlefish and squid ink in culinary creations simply happened spontaneously in different places at different times.

Primitive humans aimed to use every part of the animal or fish they caught, so it would have been quite normal for inquisitive cooks to experiment by adding cuttlefish ink to stock or gravy. 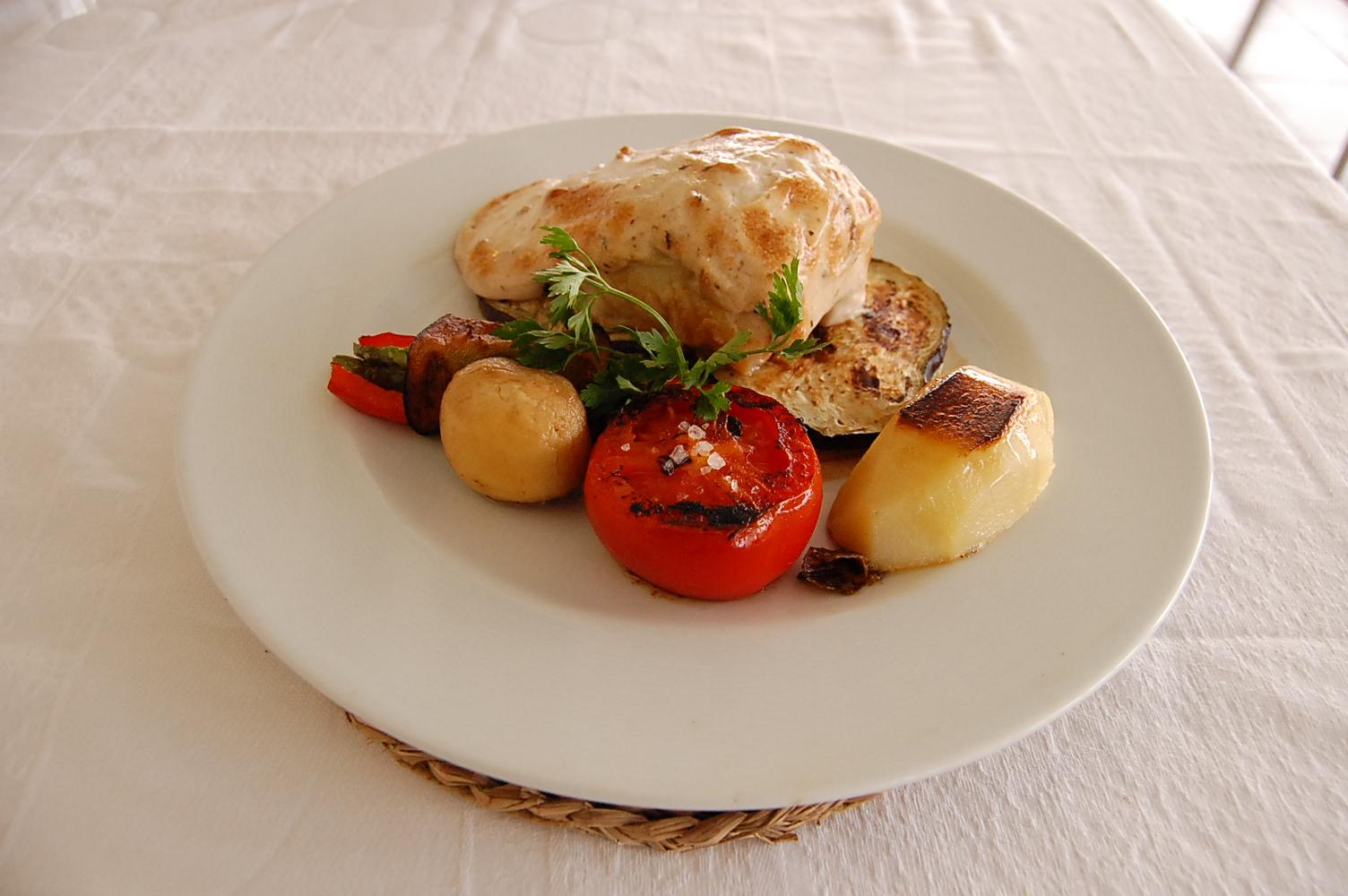 Most of the cuttlefish I see at the municipal markets and supermarkets is cleaned and ready for use and you will find a wide variety of sizes. Choose those that suit you best.
Even during the height of the cuttlefish season, some of those at the supermarkets are frozen, but that isn’t a problem because the freezing process helps to tenderise them.
One of the best ways to eat a couple of small fresh cuttlefish is to have them raw, which Richard Stein recommends in his English Seafood Cookery.

Cuttlefish is more of a texture than a taste and it is ideal for eating raw. You don’t like the idea of eating raw cuttlefish? As Stein commands: “Just try it!”

If you want to have a go with raw cuttlefish, cut it into thin strips and serve it the way Stein suggests: with a soya sauce dip and a spot of wasabi, the fiery green Japanese horseradish paste available in Chinese shops and some supermarkets.

Pass the cuttlefish strips through the dip (ideally with chopsticks) and then add a touch of wasabi paste. You can use the wasabi as it comes or dilute it with a little water. Either way it can take your breath away.

The highlight of the Spring is Alcúdia’s Sepia Fair where restaurants set up stalls in a large marquee and everyone tucks in to 2€ plates of cuttlefish cooked in every way there is. Really hoping it’ll be back this year. It’s been absent for 2 years.