A life full of design

I came in to contact with Swedish Yvonne Börjesson when a client of mine wanted a full make over of their Mallorca home and I had no clue where to start. I had heard about her and really like the design update she made in La Paloma Restaurant in the old town in Palma. Yvonne is the living legend of Home Couture and have spent all her life in fashion and design business. She still has her house in Paris but admits she loves the island and spend a lot of her time in Mallorca.

We agreed to meet in a nice café in Palma for a coffee and she insisted that we both set off at least an hour for the first meetup. As a true swede she steps in exactly on time and with a big smile sits down next to me. “I thought it’s easier if I show you some of my work and what I do when we talk”, she says. I felt like Christmas had come early when she carefully layed out samples of her own designed fabrics in different colours. Yvonne starts to explain how she works with the different materials and presents photos of the type of furniture she has produced locally in Mallorca.

The same material she wears in her jacket, looks completely different on a footstool or an ornamental cushion. Knitted materials, real leather, a lot of linen and natural materials are in the collection that she offers and since 2008 she produces tailormade furniture as well. I stared at a super cool orange sofa that you can find in the real estate boutique of Fantastic Frank in Palma. “I made the drawings for that sofa in the shop” she says as she smiles. “The client had very anonymous furniture before, and I wanted something that would make people stop and look. A little later I added a white/orange puff with perforated leather that brings some fun in to the room”

Yvonne started out her career designing active sportswear in Sweden and quickly became well know for her strong collection concepts. In 1994 she moved to Paris and changed over her concept to women’s wear and designer clothing. She was doing very well and in 1998 her own brand was launched Yvonne Börjesson Paris- Stockholm, she was immediately recognised by the international press, as a creator of new concepts in ready-to-wear. Well known Patricia Field in New York city became her first client. 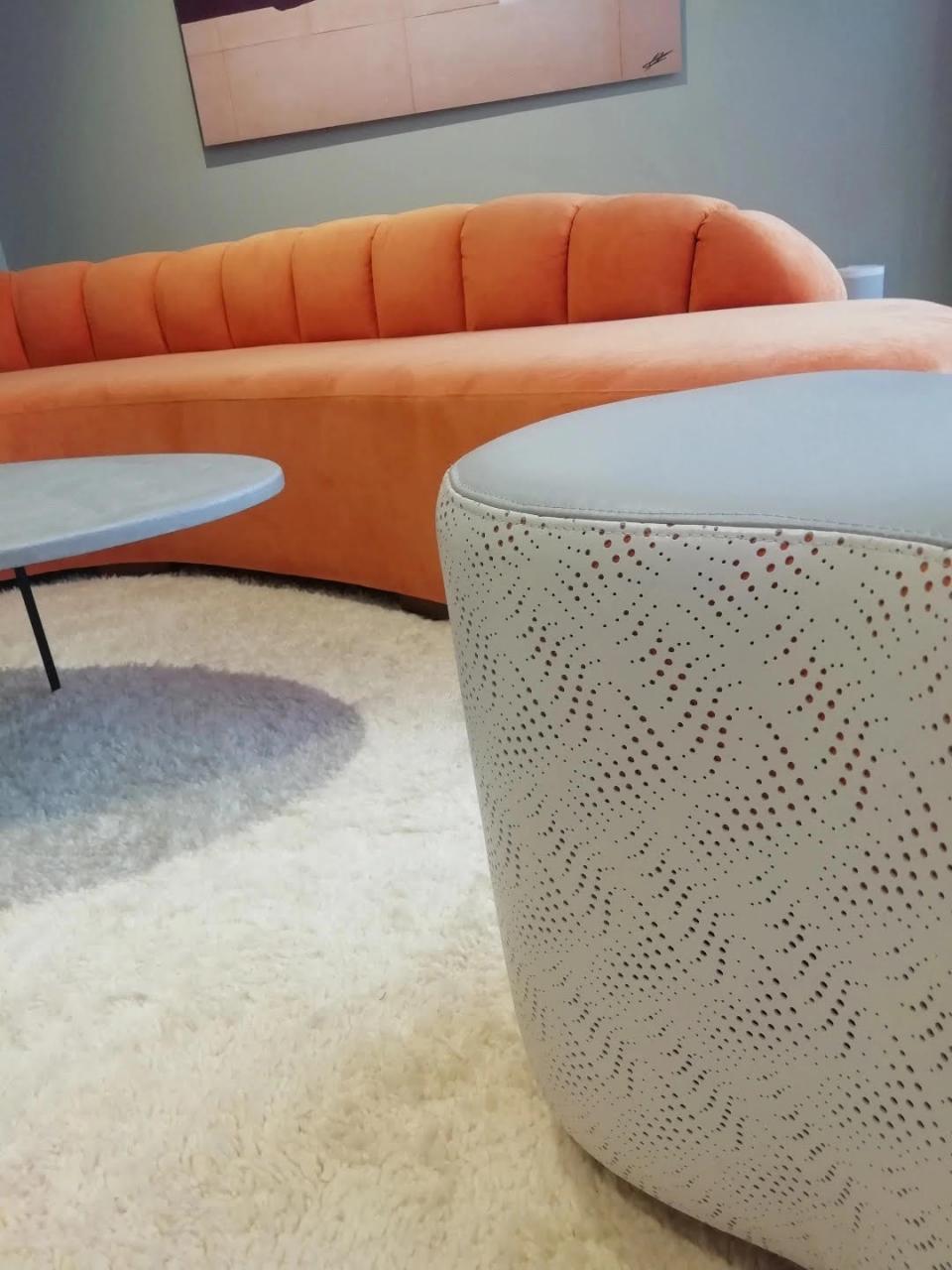 Yvonne has represented Swedish design and innovation in several international events.
Her biggest achievement took place in Spiral Hall, Aoyama, Tokyo during the exhibition «Swedish style in Tokyo 2001», where she directed 38 people on the scene, including Swedish dancers and well know jazz musicians from the Swedish music scene.

“That was a huge moment in my career, it felt very special to have so many Japanese models on the stage at the same time all wearing my Scandinavian knitwear” she remembers. Yvonne’s philosophy is to create objects & clothing in creative and interesting material. All her creative work is starting with the research of new creative textiles & leathers which she combines to create interesting contrasts in surfaces and structures. The shapes are pure and simple and slightly futuristic. Both her furniture as well as her clothes are meant to highlight the more classical pieces you have in your home or wardrobe. Together with her design pieces, they create a new design unit.

Being specialised in concept design, Yvonne Börjesson created the interesting textile concept for the French company Bleu Nature. Her input of new ideas gave the company tremendous success during 2005-2010.

But she did experience hard challenges as well, “after 9/11 everything stopped, my showroom in Paris was empty for months and no one was travelling to buy new products. I had to be creative and re-did the showroom in to a boutique for private persons.” 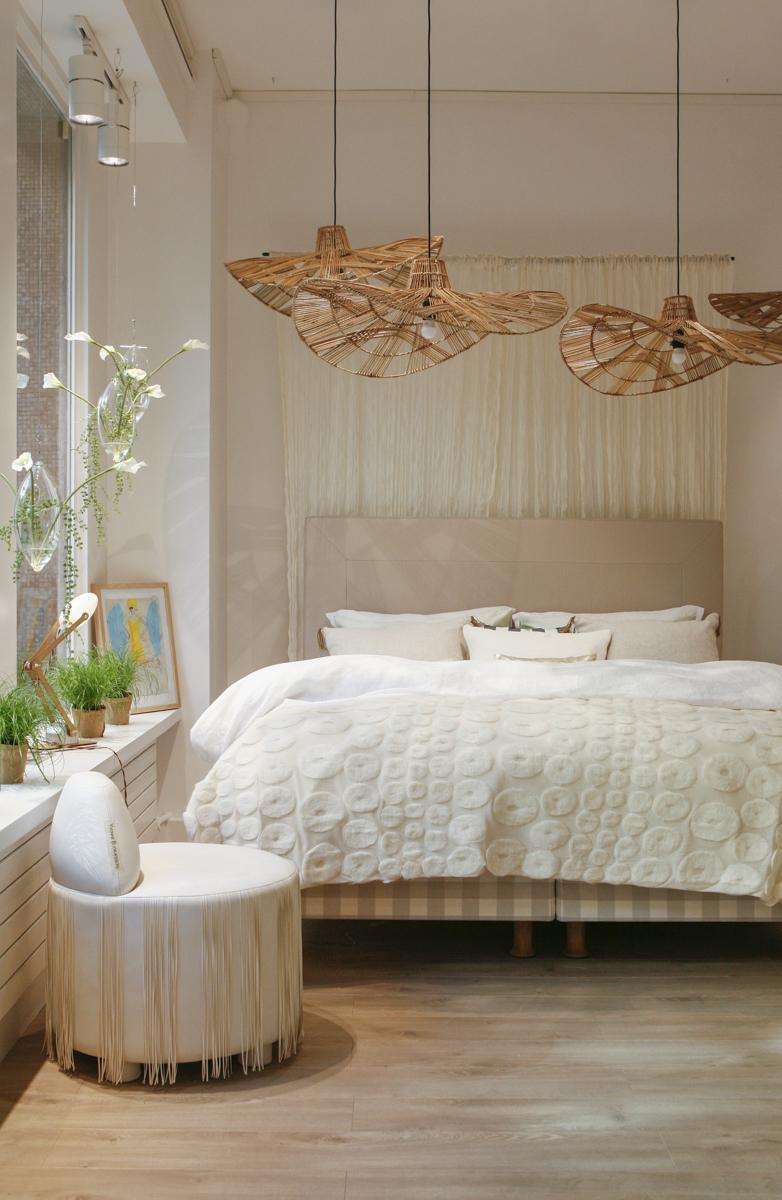 In 2014 she was contacted by the Swedish luxury brand Hästens to design a line of headboards. Her very modern design creates with this famous & classical bed a new design unit. Hästens’ showroom in Paris was all made up by Yvonne 2020 and 2021 and got featured in international design magazines. She is since then collaborating with Hästens and of cause other architects, restaurants & hotels with her design. Portixol hotel was the first hotel client in 2003. Others came after. Her Scandinativan design products in the Valluga hotel in St Anton, Austria was so popular the hotel suggested to open a hotel shop and sell some of her products in there. It was a great success.

“I’d love to work more with hotels and one of my dreams is to design a concept for a retreat finca here on the island”, she says.

My creations shall bring joy into your home YvonneBorjesson.com

Home is where you relax and get energy for your life. That’s why you shall be surrounded by good & joyful design.