Hot cross buns, like all buns, bake better when the oven is steamy as well as hot

Good Friday is still some three weeks away but in the past few days two people have asked me where they can buy hot cross buns. That, however, is a little niche in the market that no one has ever filled satisfactorily.

About 60 years ago you never saw Easter eggs in Palma but today they are everywhere: pastry shops, supermarkets and even corner shops in neighbourhoods all over town. And they come in sizes from that of a canary’s egg to well over a foot high.

The Easter egg entered Mallorca’s Holy Week celebrations thanks mainly to British-owned shops and supermarkets importing them for British residents.

The eggs caught on with a few Mallorcan pastry shops in the centre of Palma and quite soon after that they were making an appearance in the bigger supermarkets.

They became such an enormous success that a company called Kinder did them all year round — wrapped chocolate eggs about the size of a hen’s egg with a tiny toy inside aimed at very young children. They aren’t called Easter eggs and they are still an incredible success all over Spain.

The British-owned shops and supermarkets also imported frozen hot cross buns and a couple of bakeries in the Palmanova area as well as the north of the island sometimes baked them fresh.

But the buns didn’t have the allure of chocolate Easter eggs and I was only ever aware of one Palma bakery that did them.

That was a Mallorcan place off Calle Industria walking towards Plaza Serralta which made them for a couple of years.

But the hot cross buns didn’t click with the baker’s Mallorcan customers and he stopped doing them.

Eventually Carrefour was selling them at the Porto Pi Center, but it’s been a long time since I’ve seen them there.

You can get frozen ones at Nice Price and I’m sure outlets in other parts of the island also stock them. 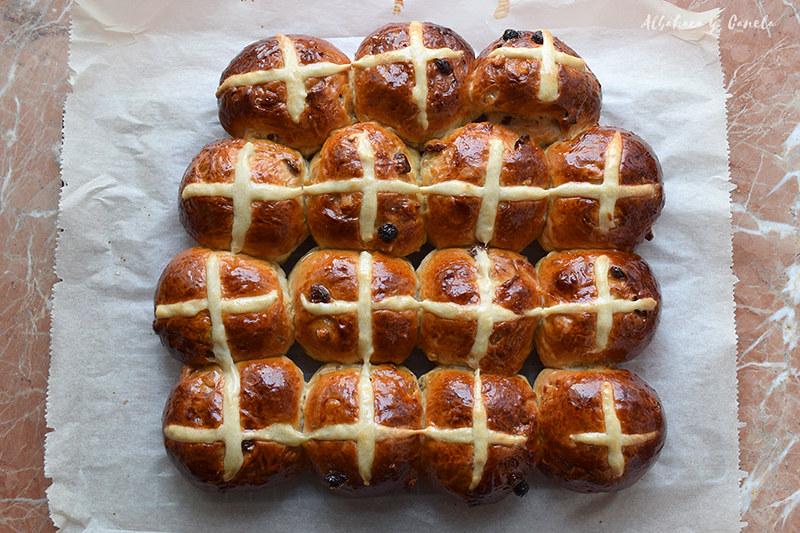 It’s obviously not at all easy to have hot cross buns for breakfast on Good Friday morning unless you have access to a nearby supermarket that stocks them.

But that’s not much of a problem because hot cross buns are an easy peasy bake and it’s no big deal to do your own.

Hot cross buns are such a simple bake that even complete novices can get satisfactory results. There is little exact chemistry involved and it’s a free-wheeling kind of bake in which millimetric measurements are not called for, although you must experiment to to get the mix of spices and dried fruits to your liking.

One of the advantages of making your own is that you can add the spices you prefer and lots of currants and candied orange peel — two rather scarce ingredients in commercial hot cross buns.

When I first started doing hot cross buns many years ago, I made the cross by cutting into the surface with the point of a sharp knife.

This wasn’t very satisfactory, however, and I was soon making the cross with a plain flour and water dough. 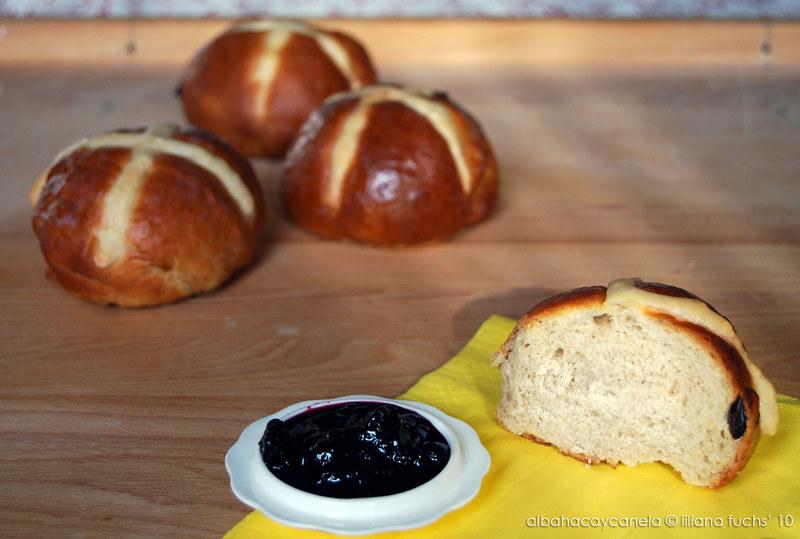 The best method is to place two thin strips of dough across the top of the whole bun, which is how most English professional bakers do it.

The cross was first used by the Anglo Saxons on spicy pastry leaves baked for the vernal equinox. The leaves represented the four seasons.

Some bakers later used the cross on bread to ward off evil spirits that might stop the yeast dough from rising. But this was dropped at the start of the 17th century as it was considered to be too ‘popish’.

The cross was kept for Good Friday, however, as a symbol of the Crucifixion. During the Restoration the hot cross bun replaced the Anglo Saxons’ spiced leaves.

Soon after I started to make my own hot cross buns I tried them with wholewheat flour instead of plain white. This adds a distinct touch of flavour and gives a better mealy texture.

Whole flour gives off lovely aromas while the buns are baking and the taste when freshly out of the oven is delish. 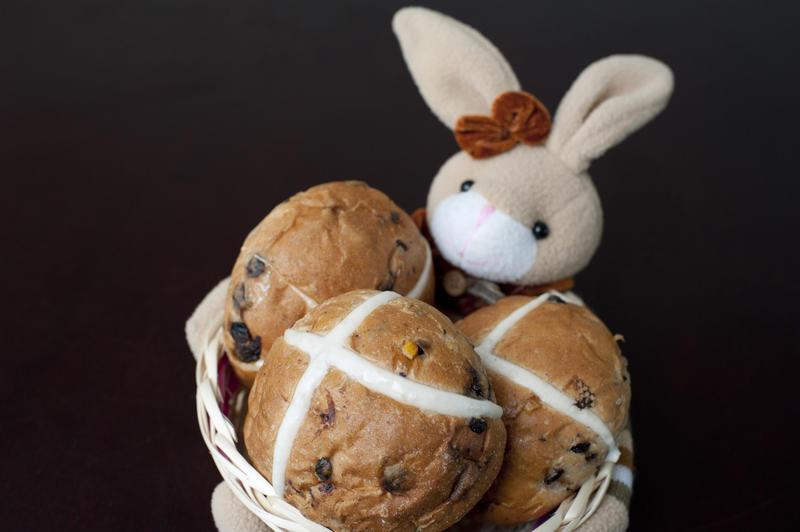 The buns can be successfully reheated next day in a steamy oven. They also toast beautifully even after three or four days.

The best buns have intense spicy aromas and flavours. They should also be spiked with generous amounts of currants and candied orange peel —and they should never be heavy or doughy.

Dozens of recipes exist and I am giving one that works well even for those who have never made hot cross buns and who don’t have much baking know-how.

Put the yeast into a bowl and blend with a little of the milk-water mixture. Sieve half of the flour into another suitable bowl and make a well in the centre.

When the yeast is frothy, stir in the rest of the milk and water and pour it into the well of sifted flour. Mix thoroughly. If the mixture is somewhat dry, add a little extra milk. Cover with a cloth and leave in a warm place for 45 minutes.

Sieve the rest of the flour, add the spices and salt, then stir in the sugar, currants and candied orange peel.

Add this to the first mixture after it has risen for 45 minutes, and pour in the melted butter and the well beaten egg. Mix thoroughly with your hands and knead until the mixture is smooth.

The absorption rate of wholewheat flours varies tremendously, so if the dough seems dry add tiny amounts of warmed milk until it has the right smooth consistency.

Cover the bowl with a cloth and leave in a warm place, this time for 90 minutes. After this second proving, knead the dough for a few minutes and turn it out on to a floured surface. Roll it into a cylindrical shape and cut it into 16 even-sized pieces.

Shape these into rounds and put them on a greased and floured baking sheet. They will expand before and during baking, so they must be well separated.

Make a plain flour and water dough and use narrow strips to criss-cross the tops of the buns.

Leave the buns on the baking sheet in a warm place for 30 minutes until they are well risen and bake them in the centre of a preheated hot oven for 20-25 minutes.

As soon as they are taken from the oven, brush them with a sugar-and-water glaze: two tablespoons of sugar dissolved in two of hot water.

Hot cross buns, like all buns, bake better when the oven is steamy as well as hot. You can create the right conditions by placing a wide shallow dish of boiling water on the bottom of the oven.

I make use of a tip from Xisco Moranta of Sa Pobla, one of the island’s best pastry cooks who retired a few years ago. This little trick can be used with any dough that contains yeast.

When the dough has risen and you knead it a second time, add a tablespoon of thick cream and continue to knead until it is well absorbed. This gives a smoother and richer dough.
A good hot cross bun straight from the oven is superb on its own with a nice cup of tea or a café con leche.

Even so, I like to eat mine by breaking off pieces and placing a dab of butter on them. And as I like little gastronomic treats at Easter, the butter I use is from Normandy and I buy it at the Club del Gourmet of El Corte Inglés.

It costs €4.20 for a 250 grs pack — more than twice as much as I pay for their own-make butter at the supermarket of El Corte Inglés.

But €4.20 isn’t all that much for a magnificent once-a-year treat. Well, twice a year. I also buy the Normandy butter during the 12 days of Christmas.