It could work out cheaper to spend some of the winter in Mallorca. | Majorca Daily Bulletin reporter

Mallorcan hoteliers could offer a crucial solution to the cost of living crisis in the UK this winter.
While gas and electricity costs have risen in Spain, they are by far not as steep as in the UK and the Spanish government has taken steps to try and reduce the increases by as much as possible.

So, keep hotels open, offer good rates and the Britons might just opt to spend a long winter in Mallorca and save on their fuel bills - surely it is worth looking at - as the Euronews graphic show, electricity in Spain is cheaper than in the UK. 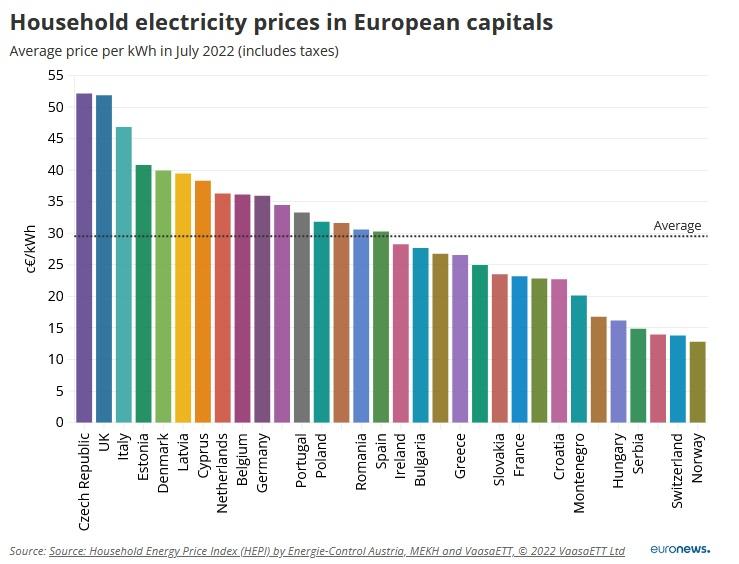 This winter, Britons will spend an average 10% of their household income on gas, electricity and other heating fuels as well as domestic vehicle fuels, mainly petrol and diesel, twice the amount in 2021, according to Carbon Brief’s calculations of official data.

Mallorca businesses trying to adjust to the impact of inflation

Chicken being taken off the menu in Mallorca

This makes the current energy crisis more severe than those of the 1970s and 1980s.
An oil producer’s oil embargo and the Iranian revolution in 1979 caused blackouts and long queues in petrol stations in the West. At the peak of that crisis in 1982, people in the UK paid 9.3% of their income on energy.

A household is defined as living in fuel poverty if it is low income and needs to spend 10% or more of its income on energy, according to NEA and other British charities. The definition is unofficially used in other European countries.

“The increase in energy bills that we’re seeing is completely unprecedented,“ said Peter Smith, director of policy and advocacy at NEA.

On second thought. Good idea. Spain offers generous subsidies for things like petrol and energy and healthcare. May as well come over and consume as much of those freebies as you can. At least for the winter, so you don't have to pay the ridiculous UK heating bills. Good job we stopped foreigners coming to blighty for freebies. Bunch of freeloaders, that lot. Enjoy your cheap Spanish winter.

The British resorts pretty much become ghost towns in winter, which would mean they'd be faced with having to make tough choices. British pensioners could be subjected to having to stay in fincas or villas, and be subjected to foreign stuff on their hols abroad. No proper Sunday roast. No fish & chips shops. Foreign fags & beer.... And they don't speak proper English. Who wants that?

In the past THOMSON HOLIDAYS did the YOUNG AT HEART Holidays during the Winter Months in Mallorca. Pensioners loved these holidays. They saved on their Utility Bills for the THREE MONTHS that they stayed in their Hotels. They met new people and enjoyed many entertaining activaties. Perhaps similar schemes would bring profitable business to Mallorca this Winter.