After recently acquiring the excellent book Birdwatching in Mallorca by the late Eddie Watkinson, I was intrigued by a mention on page forty four to Christopher Columbus and Castel de Santauri. Majorca has certainly had a turbulent history and seen invasions by the Romans and Moors to name a few – both of whom have left history and landmarks right across the island. But I was surprised to learn that in Porto Colom there is a museum dedicated to the great explorer Christopher Columbus.

The museum is devoted to the theory that he was a ‘Mallorquin’, and Colom (as in Porto Colom) is Mallorquin for Columbus. There is a wealth of evidence that supports this theory and although the topic has been debated and argued for many years, the experts cannot be certain either way. It is thought that Columbus spoke ‘Mallorquin’ which is quite different from Spanish (and certainly Italian). Well it gives you food for thought either way.

What would Majorca have looked like in his time? Well the coastline with its beautiful sandy beaches and rock formations would of course be the same as they are now, as would the stunning azure Mediterranean Sea – but the landscape would have certainly been different. Hotels and apartments would have been replaced by little homesteads here and there and small self-contained villages. There would have been extensive open areas for farming and raising livestock which can still be seen today, along with groves of Olives, Grapes, Almonds and Figs. Roads as we know them would not have existed; rather there would have been tracks and drovers trails criss-crossing the island. Tracks leading up to castles and fortresses would have been hard going, twisting and turning and of course guarded along certain sections. For example, anyone who has tried to drive the road up to Puig de Maria near Pollensa will know what a twisting road this is, quite unsuitable for modern cars. But this would have been the main route up to the church and would have been hard going too. 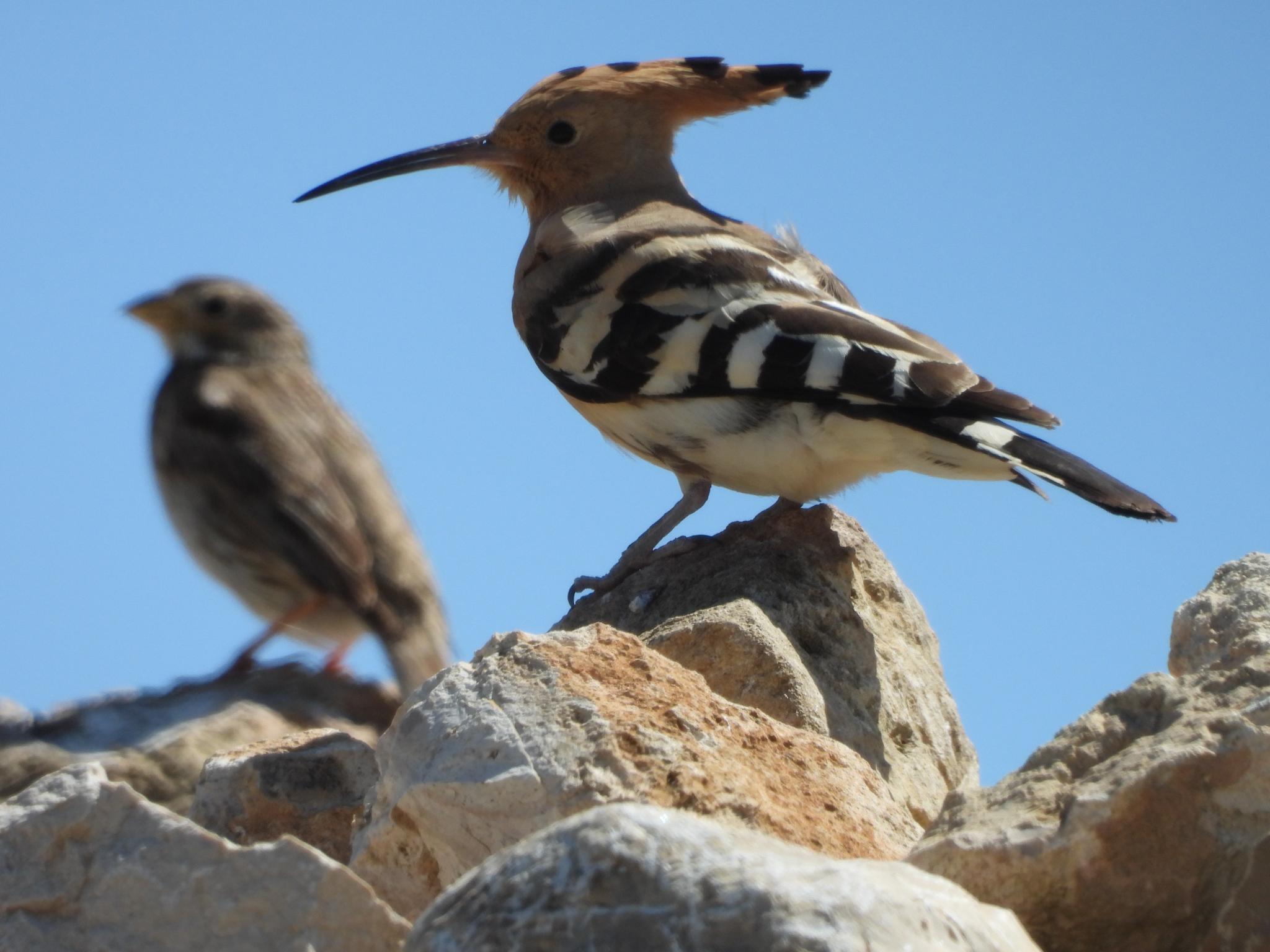 Hoopoe with a Corn Bunting in the background. Photo: Neville James-Davies

Now whether or not he had an interest in the wildlife we will never know, but I often wonder that if he saw a Hoopoe with its strange ‘punk rocker’ style head feathering, that it would have made him stop and take stock. Whilst around the coast and out at sea, Columbus and his crew would certainly have had close sightings of sea birds such as the Gannet, Balearic Shearwaters, Cory’s Shearwaters and Yellow-legged Gulls, as these would follow any large ships at the time on the off chance of their being some free food thrown overboard, much like they do today with the fishing boats and trawlers. Incidentally, there is an excellent music score by Vangelis centred on Columbus’s journey to the New World, called 1492 The Conquest of Paradise, which is one of my favourite scores by him.

It is known that an Italian nobleman was imprisoned at Castle de Santuri (which can be seen from Porto Colom), and it is said that the famous man was his son by a girl servant employed there. The castle is the remains of a 14th century Arab fortress, built onto the side of a sheer rock face with commanding views over the plains below. This is in my view is the best spot on the island for close views of Alpine Swift where a small colony of around four to five pairs breed each year. To access this site, join the MA-6100 road (heading towards Santanyi and then on towards Felanitx) depending on which direction you are travelling from. After passing through the small village of Cas Concos on the MA-14 road, look for a turn signposted for the castle (before the town of Felanitx). There are some special birds in the area including Alpine Swift, Crag Martin, Blue Rock Thrush, Peregrine Falcon, Nightingale and Firecrest.

Enjoy a slow drive along the tarmac road and up to the castle looking for a variety of species along the way. Firecrest and Nightingale can be heard from the vegetation and trees on both sides of the road, and the scrub areas can be good for warbler species with Tawny Pipit, Short-toed Lark and Thekla Lark in the tilled fields sometimes showing well (providing the weeds are not high and carpeting the ground). When you reach the castle, there is an adequate sized car park (free parking). From the wall you have commanding views over the plains below down to the sea, and you can appreciate why a castle was built here. Crag Martins breed on the sheer rock faces and from late April onwards you will see and hear the Alpine Swifts as they fly low overhead right in front of you. Peregrine Falcon and Blue Rock Thrush frequent this area.

Male Blue Rock Thrush with nesting material photographed from the side of the castle walls. Photo: Neville James-Davies

For a few euros each you can go inside the castle where there is a lovely circular walk also with tremendous views. I have done the walk inside the castle several times, and not only are the walls incredibly thick and imposing, but the 360 views are awesome. Any approaching invader would have been seen no matter what direction they approached from. Hirundines aerial feed above you as you walk around, and the ‘cronking’ calls of Ravens can be heard overhead, where there is always the chance of seeing Booted Eagles and Red Kites. The Peregrine Falcon certainly favours this area and I have seen Hobby here too on a number of occasions – no doubt tempted in by Crag Martins and Common Swifts which they will readily take.

Next week will see the first of a two part special feature on an environmental and wildlife pioneer of Majorca who we owe our thanks to for providing us with the best wetland area in Europe. Please note: copies of my new book Birdwatching on Majorca are available for sale. Please email wildmajorca@gmail.com for more details.