Some of the world’s finest dishes are so easy to do that even complete amateurs can manage them as well as any cook with three Michelin stars. This is because these dishes, once in the pot with a minimum of preparation, look after themselves. The cook’s contribution is virtually nil, yet when the dish is on the table, the kudos come pouring into the kitchen.

Several of Spain’s superb array of pulses — they are among the world’s best — are in this category but we are inclined to ignore them, partly because they are somewhat expensive…or, more exactly, they appear to be on the dear side.

The Basque Country’s ultra-famous alubias negras de Tolosa is the most exclusive of Spain’s beans: it’s extra special quality and relative scarcity make it the country’s most expensive bean. It’s the Rolls Royce of the bean world.

These Tolosa beans were selling at €25 a kilo last year — which is more than 12 times dearer than a normal supermarket bean. That comparison makes them sound extremely expensive. But when you take into account that a kilo of Tolosa beans will provide a dish for 10 people, the cost per head is €2.50. That is hardly a budget-breaking price.

When we talk about alubias de Tolosa, we are not referring to a botanical variety or even a specific geographical one. It is more a commercial name than anything else. And there is a good reason for this. For centuries Tolosa has been the nerve centre of trade in the Basque Country’s Guipuzcoa region, with products from the surrounding areas and other parts of Spain having to pass through its markets.

So alubias de Tolosa aren’t grown in the town of Tolosa but in other parts of Guipuzcoa. They are merely marketed in Tolosa.
When bean connoisseurs talk about alubias de Tolosa they mean the black variety which, as we have seen, are scarce and expensive. However, for everyday use, most Basques use the Tolosa bean of a brick-red colour. There are more of them and they are a good deal cheaper than the black ones.

Although there are white alubias de Tolosa, it was mainly the brick-red variety that went into the traditional dish. The black ones were a rarity 60 years ago.
But the Basque Country’s trendy cooks liked the exclusiveness of the black variety and started to use it. It became the gourmets’ favourite…and the price rocketed.

Just how good are the black alubias de Tolosa? I last made them two years ago and they were exquisite. The beans cooked with little intervention from me and nothing in the way of other ingredients except for a few shallots, three plump garlic cloves, some virgen extra olive oil and two bay leaves. They were the best dish of beans I have ever made.

When you pay €25 for a kilo of beans, which is what the black alubias de Tolosa cost at the Club del Gourmet of El Corte Inglés, you expect them to be gastronomic delight of the highest order.

They are and they turned out to be extremely easy to make, the final result being the kind of dish you’d expect to find in a restaurant with three Michelin stars — except that Michelin star cooks don’t usually do real food like this.

All I did was put the washed raw beans in cold water to cover by an inch, added four finely chopped shallots and a couple of bay leaves, put them on a very low heat and left them there, with the lid on, for just over four hours.

I shook the pan from time to time and made sure the beans were always covered with at least an inch of water. You must watch the level of liquid frequently at the beginning, which is when the dry beans take in a great deal of water.
Always shake the pan with short vigorous movements. You mustn’t stir the beans, even gently and with a wooden fork, in case you burst any of the skins.

After just over four hours, when the beans were velvety soft, I gently sautéed three finely chopped cloves of garlic in a small frying pan with half an inch of virgen extra olive oil.
When the garlic was soft but not golden, I stirred it and the oil into the beans, being extra careful not to burst any of the beans. I also added salt to taste. And that was it.
The beans were ready 15 minutes later and the water had become a thick silken dark sauce that looked and tasted superb. The beans, although black to begin with, were of a darkish brick-red colour. The texture was perfect and the flavour, which came mainly from the beans, was subtle and exquisite.

I followed the purists’ recipe and cooked the pork spare ribs and the chorizos for 50 minutes before adding the sliced cabbage. I simmered everything until the ribs were off-the-bone tender.

The beans were cooked the day before I intended to serve them. Alubias de Tolosa, like most other beans, should be cooked at least several hours before they are eaten. They are even better when done 24 hours in advance.
On the day of the meal, I gently reheated the beans and brought the other ingredients to a simmer in their separate saucepan, adding the morcillas de cebolla 15 minutes before they were to be served.

When everything was ready the alubias were ladled into soup plates and the other ingredients were arranged on a serving dish, the cabbage in a mound in the centre, the pork spare ribs at its base. The chorizos and the morcillas, cut into bite-size pieces, were neatly placed round the edge. One can then eat the beans as they come and enjoy their very special taste to the full, or add little bits of the other ingredients when wanted. That way, the various flavours, some strong, some delicate, can be kept separate.
There are Tolosa beans that cost much less than the black kind, but they are not as memorable. The best always comes with a higher price tag, be it luxury beans or exclusive cars such as the Rolls Royce.

But at least Tolosa’s luscious black beans are something many of us can afford. I could easily be eating a plate of them when the new season crop comes out in a month’s time — but I’m never ever likely to be seen driving around Palma in a Rolls Royce…not even a hired one.

With the alubias negras de Tolosa we are right at the top end of the up-market scale, but we now come down to the other end — to look for an excellent and different Spanish beans dish suitable for second-year university students in England…which means it must be a cheap. Students the world over never seem to have enough money. 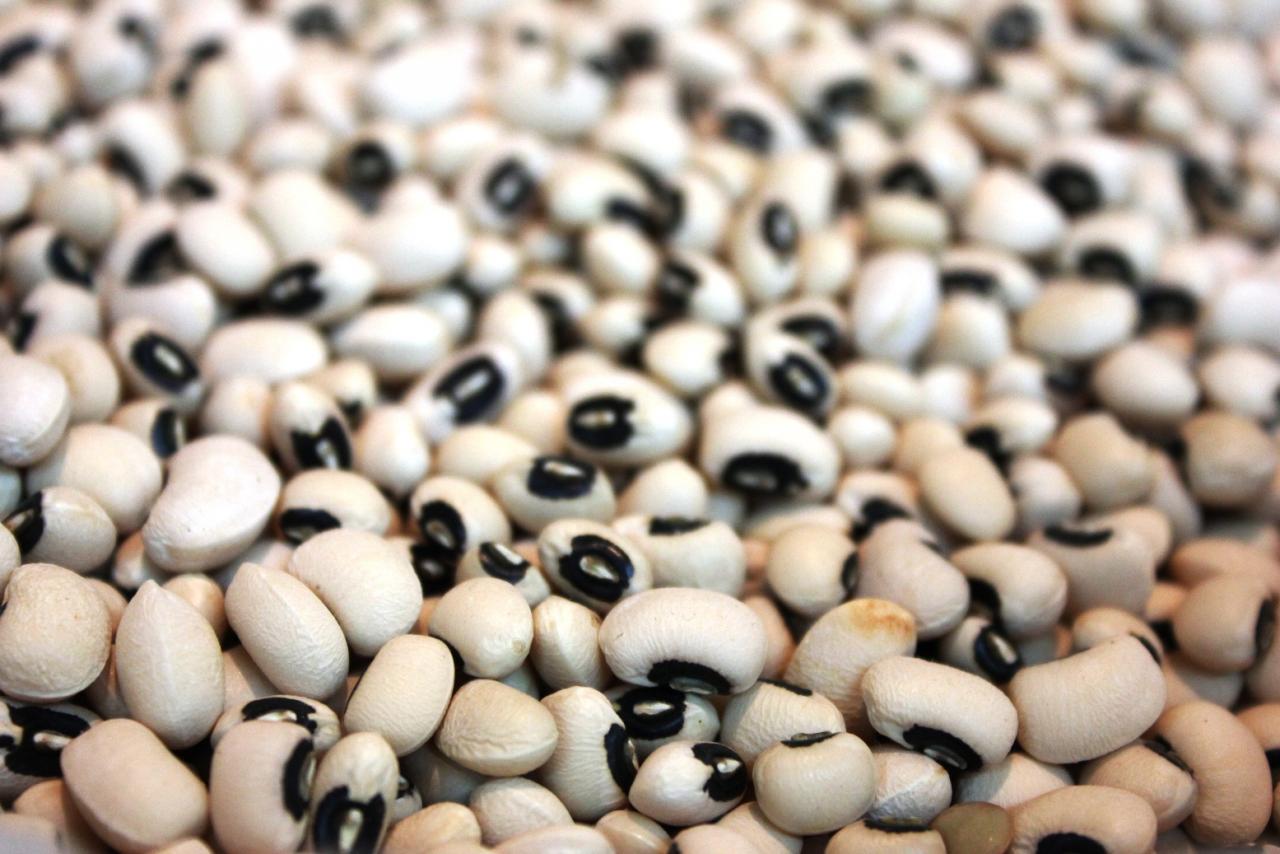 The daughter of a friend, who had done most of her pre-university education in Palma, wanted a simple beans dish that was vegetarian and made with ingredients readily available in England. Something ‘with an unusual taste’ was added as an afterthought.
I immediately thought of a rustic regional potaje and that bit about ‘an unusual taste’ meant it would be one with the addition of a ‘picada’ to give it a veritable explosion of taste just before serving it.

Spanish regional cooking is replete with bean potajes of this kind so it was easy to pick out one from Murcia, renowned for the quality of its vegetables and its potajes.
The students would get a magnificent Spanish dish that is easy to make and Bulletin readers would have a potaje for cold winter days…of which there will be plenty before spring arrives.

Soak the beans overnight in plenty of cold water. Rinse well, put them into a large pot and cover them with cold water to a depth of two inches above the surface of the beans. Cover with the lid, bring to the boil, and lower the heat to a simmer.

In a small frying pan heat some virgen extra olive oil and when it is very hot fry the slice of bread on both sides until it is golden and crisp.
Take out the bread, put on a small plate or saucer and drizzle over a tablespoon of red wine vinegar on each side.

Chop the onions finely and sauté gently in a frying pan with a goodish amount of virgen extra olive oil. Peel the tomatoes and chop finely.
When the onions have been cooking for 20 minutes and are very soft, add the tomatoes and continue to cook slowly, stirring from time to time, until the mixture is of thick jam-like consistency. Then add a heaped teaspoon of sweet paprika. Stir well and cook for another five minutes.

When the beans are almost tender (usually after about 45 minutes, but test them to make sure), add extra boiling water and then the previously peeled potatoes cut into walnut-sized pieces. Bring back to the boil and cook slowly for a good 10 minutes.
When the potatoes have been cooking for 10 minutes, add the onion and tomatoes mixture and stir it well and carefully into the beans and potatoes. Then add the Swiss chard (which you have sliced into thin short strips) and cook for another five minutes or until the potatoes are soft. Add salt to taste.

Put the cumin seeds and the garlic with a pinch of salt into a mortar and pound until the garlic is mushy and the seeds well crushed. Then add the vinegar-soaked bread and continue pounding until you have a smooth mixture.
Stir some liquid from the potaje into the mortar and then add the contents to the pot, stirring them carefully and thoroughly into the potaje. Bring back to the boil, cover the pot and take off the heat. Leave for at least five minutes before serving.
This dish is more of a bean and vegetable stew than a soup, so there should not be a great deal of liquid at the end.

The fried bread picada is a thickener as well as a means of adding extra flavour, so you may want to add an extra slice to give it more body. But don’t add more vinegar.
This is a basic recipe and although alubias mantecas are recommended you could use any other kind of white bean.

I sometimes add diced pumpkin which contributes a touch of colour as well as its subtle taste. But don’t go adding every vegetable you happen to have in the pantry. Part of the charm of this dish lies in its simplicity.