This species of a gull is a typical scavenger

This week I am going to look at two resident birds on Mallorca - one of which is a common species and the other one of the world’s rarest gulls. One is quite approachable and the other has caused me some grief in the past. I am referring to the Yellow-legged Gull and Audouin’s Gull.

Let me start by taking you back to my early visits to Mallorca, where the rare Audouin’s Gull was high on my ‘to find’ list. The beach along Puerto Pollensa was earmarked as a great spot, so one warm May afternoon I turn up with my camera and binoculars. I could see a potential candidate out on the beach and made my way quickly through the throng of bathers.

I got relatively close and got a picture, but decided to chance my luck and try and get closer. So, I moved on and eventually got very close to the bird. I was surprised how obliging it was, it didn’t seem that bothered about people unlike other gull species. I got some really nice photographs, and contented I left the bird in peace and started to walk back towards the road.

Then I realised a number of bathers had covered up their white bits, and with a few comments and harsh stares aimed at me, it dawned on me they thought I was taking photos of people sunbathing and not the gull itself. Binoculars and a camera don’t instil confidence in people on a beach, so with my head low and a red face I walked quickly back to the road. 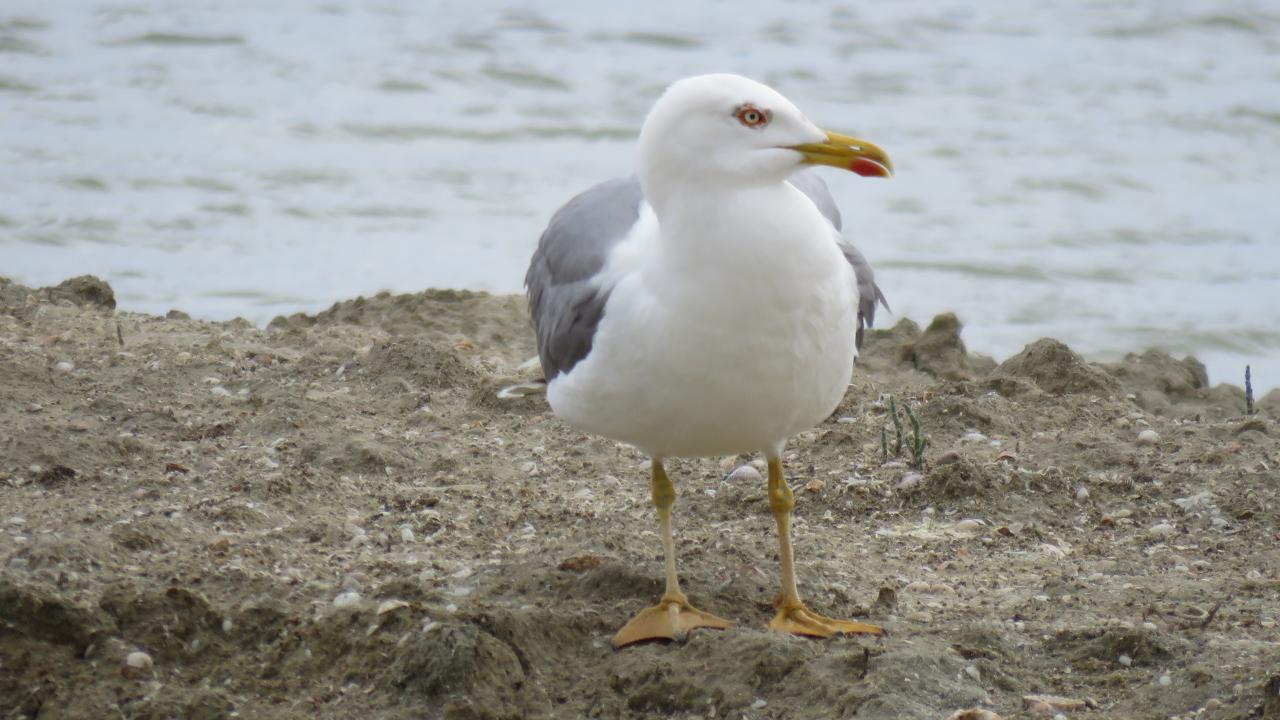 As time went on, I learned that the early morning before the people arrived was equally as good to see them, and safer. Audouin’s gull (Ichthyaetus audouinii) is a large gull restricted to the Mediterranean and the western coast of Saharan Africa and the Iberian peninsula. The genus name is from Ancient Greek ikhthus ‘fish’ and aetos ‘eagle’. The specific audouinii and the English name are after the French naturalist Jean Victoire Audouin. In the late 1960s this was one of the world’s rarest gulls numbering only around 1,000 pairs.

Although it has established new colonies, numbers have only increased to around 10,000 pairs. Unlike other gulls, they rarely scavenge and will also feed during the night. They are a fish eater and resemble a Herring Gull (which is a rare migrant on Majorca). The most noticeable features are the short, stubby dark red bill and the string of pearls white wing primary tips as opposed to the large ‘mirrors’ of some other species. The legs are a grey-green and it takes a staggering four years to reach that beautiful adult plumage. I have to say, as gulls go, the Audouin’s have one of the prettier expressions as opposed to the harsh stare of the other gulls.

The nest is a shallow scrape on the ground with a lining of feathers and plants where 2-3 olive-buff eggs, slightly glossy with brown spots and blotches are laid. Their diet consists of mainly fish but they will also eat insects, invertebrates and plant material. They can pick food from the surface of the sea without needing to slow down. During severe storms they will come well inland searching for insects and worms. Listen for the donkey-like ‘mew’ call. An Audouin’s Gull perched in the sand on an empty beach, where the silica and crystals in the sand sparkle makes for a beautiful scene.

Sitting outside the Cafe 1919 in Puerto Pollensa by the harbour, having a coffee or a beer depending on the mood, will see me watching the Audouins and Yellow-legged Gulls just overhead, and offers a good opportunity to learn the differences in plumage and shapes in flight of the adults and juveniles alike. Anywhere along the coast of Mallorca, inland lakes, salt pans and even high up at Cuber Reservoir will see this common resident.

At Cuber, I often see them not only on the surface of the reservoir itself, but perched up in groups on the rocks beyond (where the pylons are situated alongside the rough track). They are quite happy to sit there and call, scanning all around until a raptor strays too close for their liking, then a commotion ensues.

A passing Booted Eagle, Red Kite or Black Vulture hugging the cliff face will certainly disperse the gulls, which circle around noisily until they are confident danger has passed, where they settle down again on the rocks.

They are a large gull found throughout Europe, the Middle East and North Africa and has only recently been recognised as a distinct species. It was treated as a sub-species of either the Caspian Gull or Herring Gull. I am glad it has received its own status as it is quite an iconic bird on Mallorca, and the bright yellow legs are a real identification feature even from a great distance. 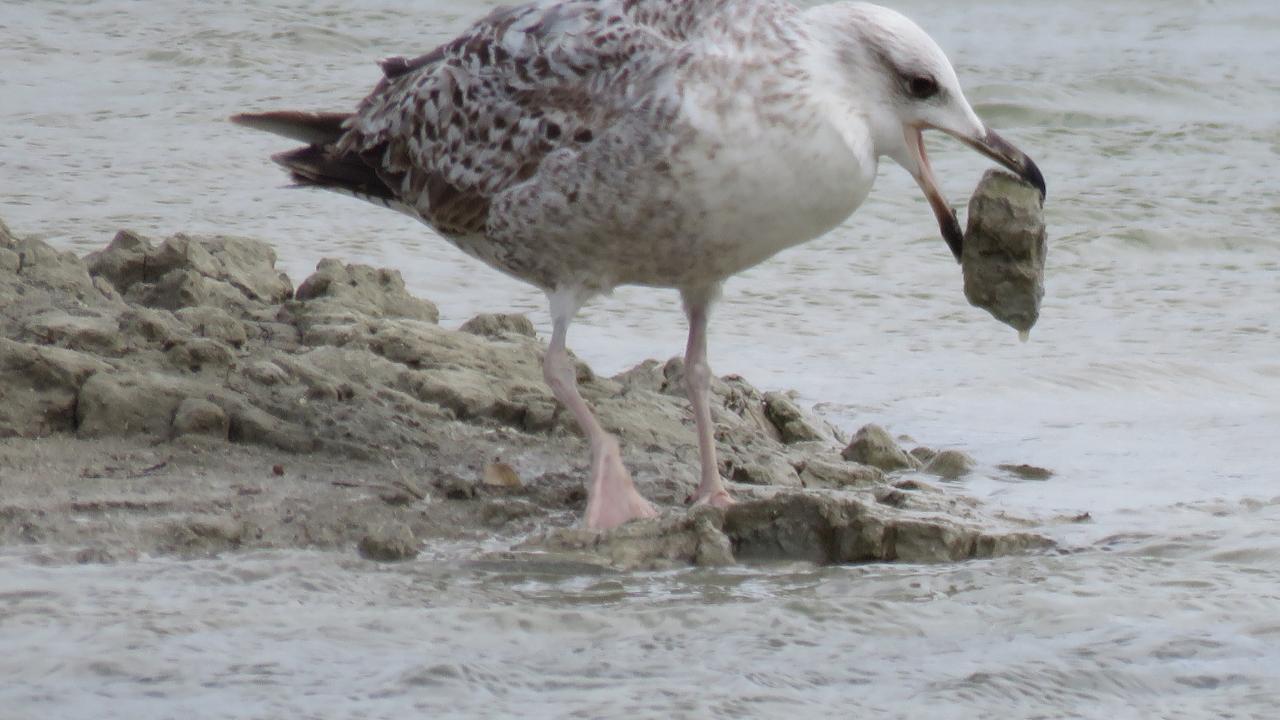 Many will spend their time in the same area all year round although some will migrate to spend the winter in milder areas of Europe or even as far south as the Gambia, Red Sea and Senegal. This species of a gull is a typical scavenger, rarely missing the opportunity of a free meal.

At Cuber for example, not only are there a ready supply of fish in the reservoir, but there are also the occasional deaths from a Goat that has lost its footing on the slopes, or a grazing Sheep that has died, any opportunity to scavenge food is always taken no matter what the species.

They are a real menace to smaller gulls, where they will pursue and harass them to drop food they have caught, and this can be seen during sea watching at Far de Cap Ses Salines and other coastal sites. They will equally scavenge over fields and will certainly visit rubbish tips. 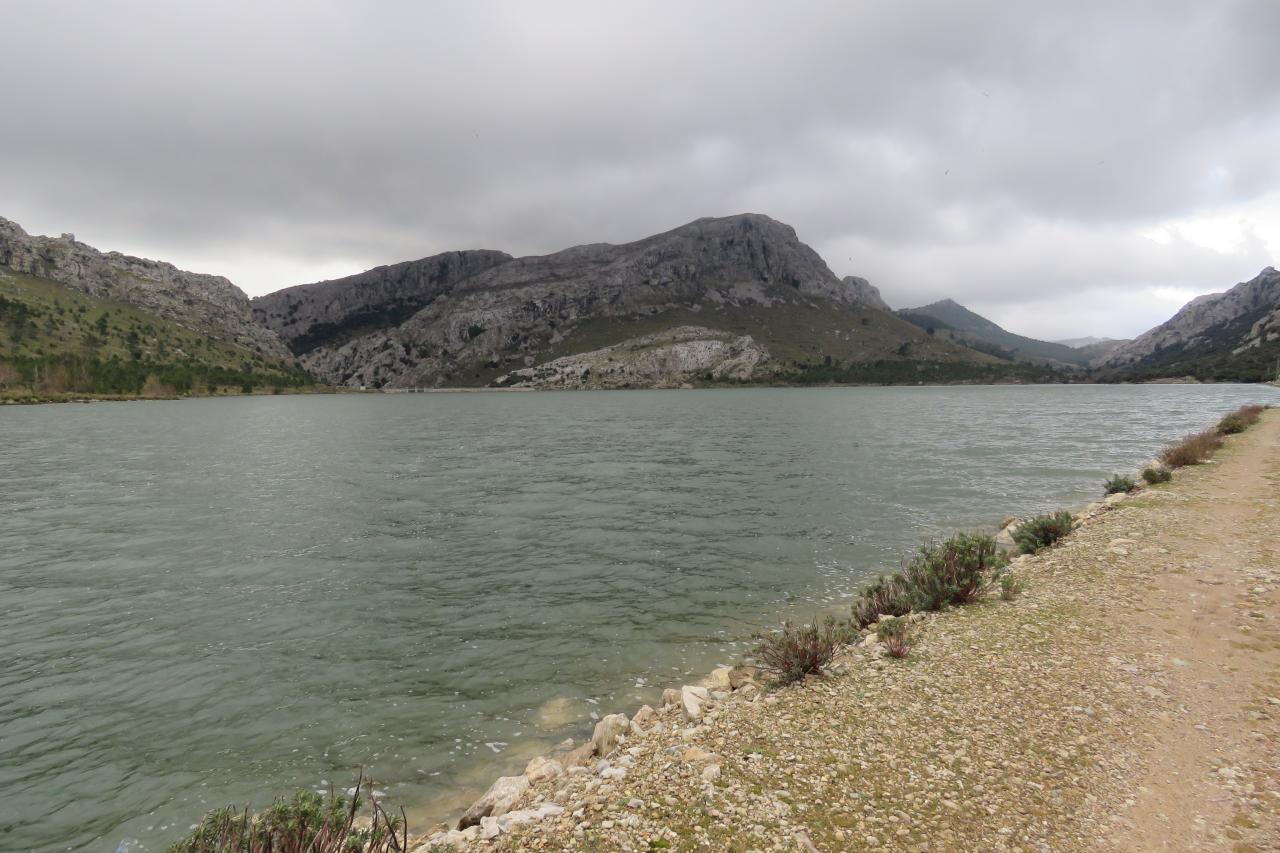 Italy reported during the lockdown of 2020, urban populations even reverting to a predatory diet, where due to hardly any people being on the streets, a lack of food scraps saw the gulls around Rome taking prey as large as Rats and feral Rock Doves. A colonial breeder along the cliffs, around three eggs are laid from mid-March into early May. Eggs are incubated for 27-31 days with the young fledging after 35-40 days so the turn-around is quite quick.

The nest is a large untidy cup of vegetation on the ground where 2-3 olive to brown eggs with darker spots and blotches are laid. Their diet is very varied consisting of a variety of fish and invertebrates and can be seen following trawlers in large groups. They will basically eat anything they can swallow.

On occasions from the hide at the Albufereta Marsh, I have watched juvenile birds picking up small rocks and then discarding them, a strange sight indeed. Listen for their long raucous ‘ashoo’ calls and deep chuckling notes. Wherever you go on Mallorca you will see gulls. Whilst they are not everyone’s cup of tea, at least take the time to look closer at the Audouin’s Gull, with its pretty face, deep red bill with a dark tip and dark legs.