The restaurant review: Sóller and lunch at Ca’n Boqueta

City man born and bred that I am, the municipal boundaries of Palma are pretty much as far as I get to in my travels these days — and even then I seldom actually reach the outskirts of the city. There are parts of Palma, just a short bus ride from Avda Jaime III, that are like unknown territory: I speak the natives’ language, although I don’t know the landscape.

But recently I’ve taken trips east, west and north-east of the capital and this week I headed north towards the Tramuntana — and got reacquainted with Sóller and its mountains.

I actually know Sóller rather well, thanks to visits over the decades. However, the last time I was there was in 2009 when I went up to collect material for a two-part feature on Sóller’s rather splendid olive oil. 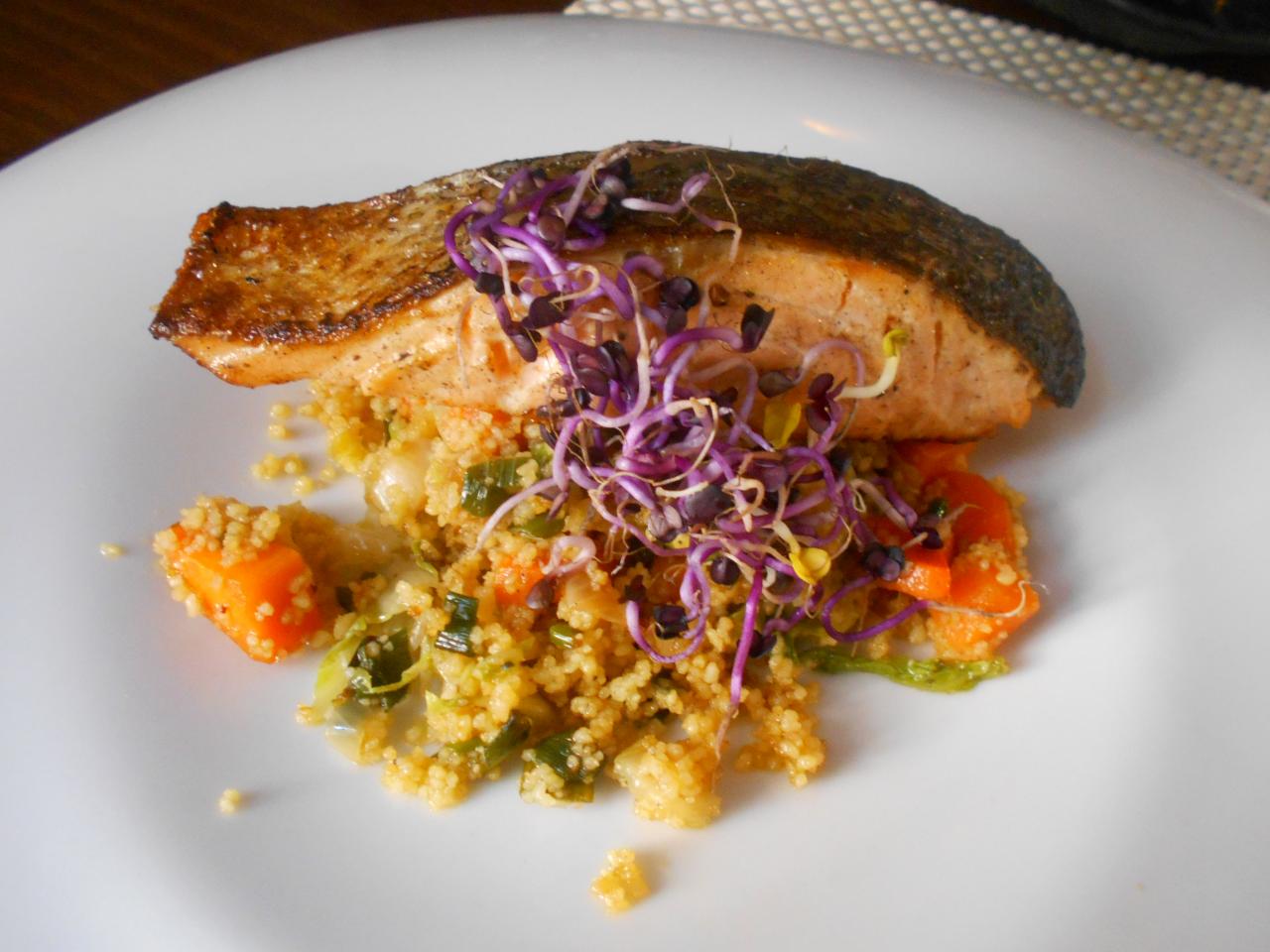 That was 12 years ago, and on Thursday as we slowly drove through the centre of town on the way to today’s restaurant, and I gleefully gazed at the passing scene, two things immediately caught my eye.

The first was that the streets were beautifully clean and litter-free. Palma has always been well spattered with filthy spots — caused mainly by citizens who know nothing about their general civic duties and responsibilities. 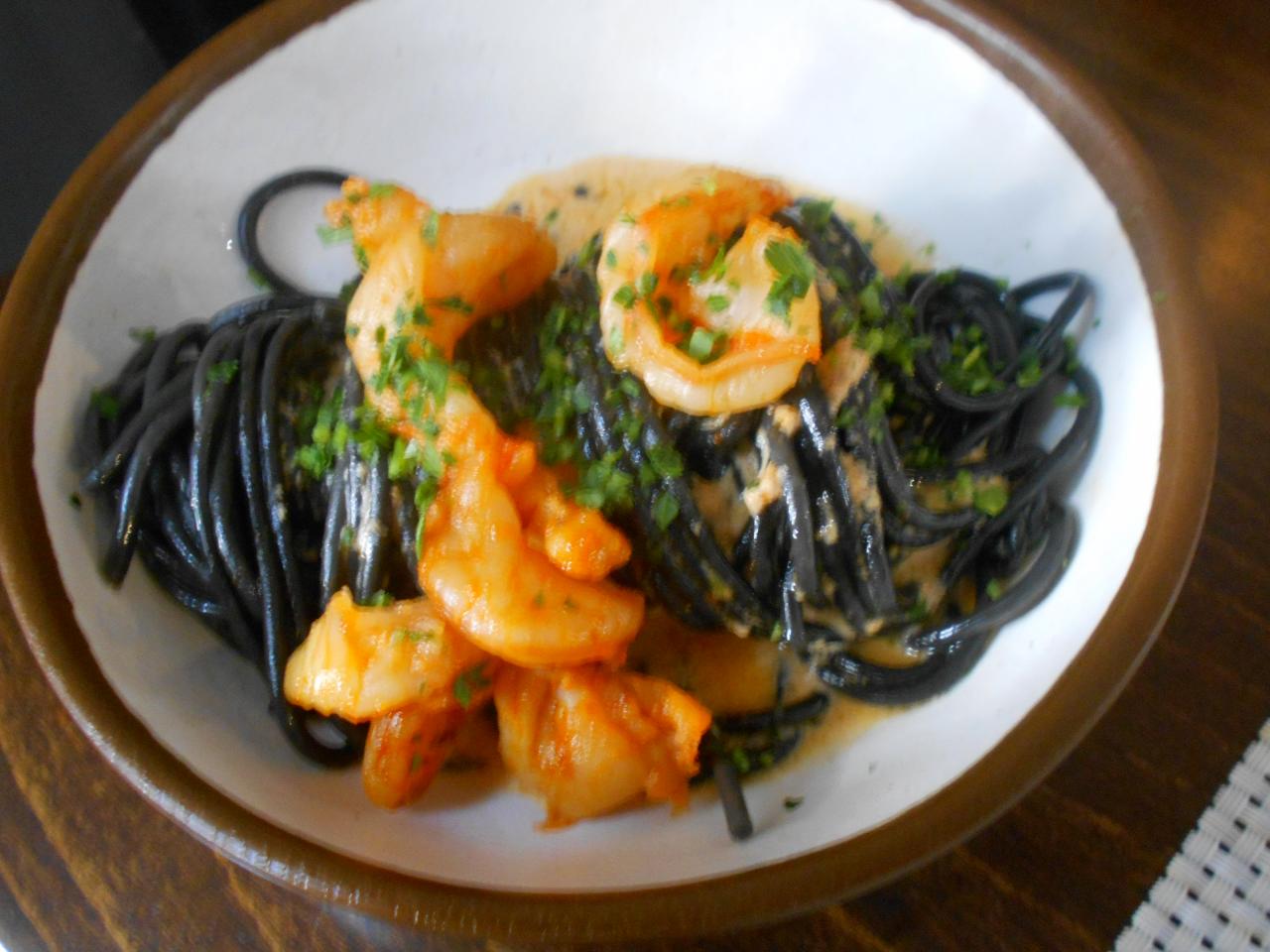 The other immediately obvious aspect of Sóller was that although 12 years had passed since my last visit, it was as if I had been in the town the day before. Absolutely nothing had changed.

In a world that is constantly undergoing redesign and remakes (much of it for the worse) it’s most reassuring to come across places where time seems to have stood still.
Ca’n Boqueta is a traditional Mallorcan town house that has been neatly adapted to give it the feel of a classy country restaurant without destroying the original architecture and design. If the owner wanted to use it in its original town house concept, it could be done with a minimum of hassle and expense.

From the street door you walk straight into the indoor dining room and then on to the open-air patio, half of which was in blazing sunshine when we arrived at 2.30pm. The shady half was fully occupied, so we sat indoors — neither of us enjoys direct sunlight.
Ca’n Boqueta was serving what it calls a ‘menú de mediodía’ and a tasting menú named ‘Toronja’, Mallorquín for orange. Every dish on this menu uses Sóller’s famous oranges as one of its ingredients.

Several restaurants in Sóller are serving their own ‘Toronja’ menu until tomorrow.
It’s a campaign to promote Sóller’s famous oranges which are considered to be among the best in Spain — and that means in the world.

I am sure other people can tell us of island oranges that are by far the best they have ever tasted. I think what it comes down to is that Mallorca is a great place for growing oranges.

Dishes for a summer day

Summer is still some 22 days away but when we went to Sóller for lunch the sun was out with a vengeance and it was a bit hotter than we actually like it. We were fortunate that the dishes on the day’s menú del mediodía were light and most appropriate for a summer day.

The meal got off to a fine start with two lovely rustic kinds of bread, one very dark and the other off-white. Both had delicious firm but light textures and even on their own they were bursting with flavour. 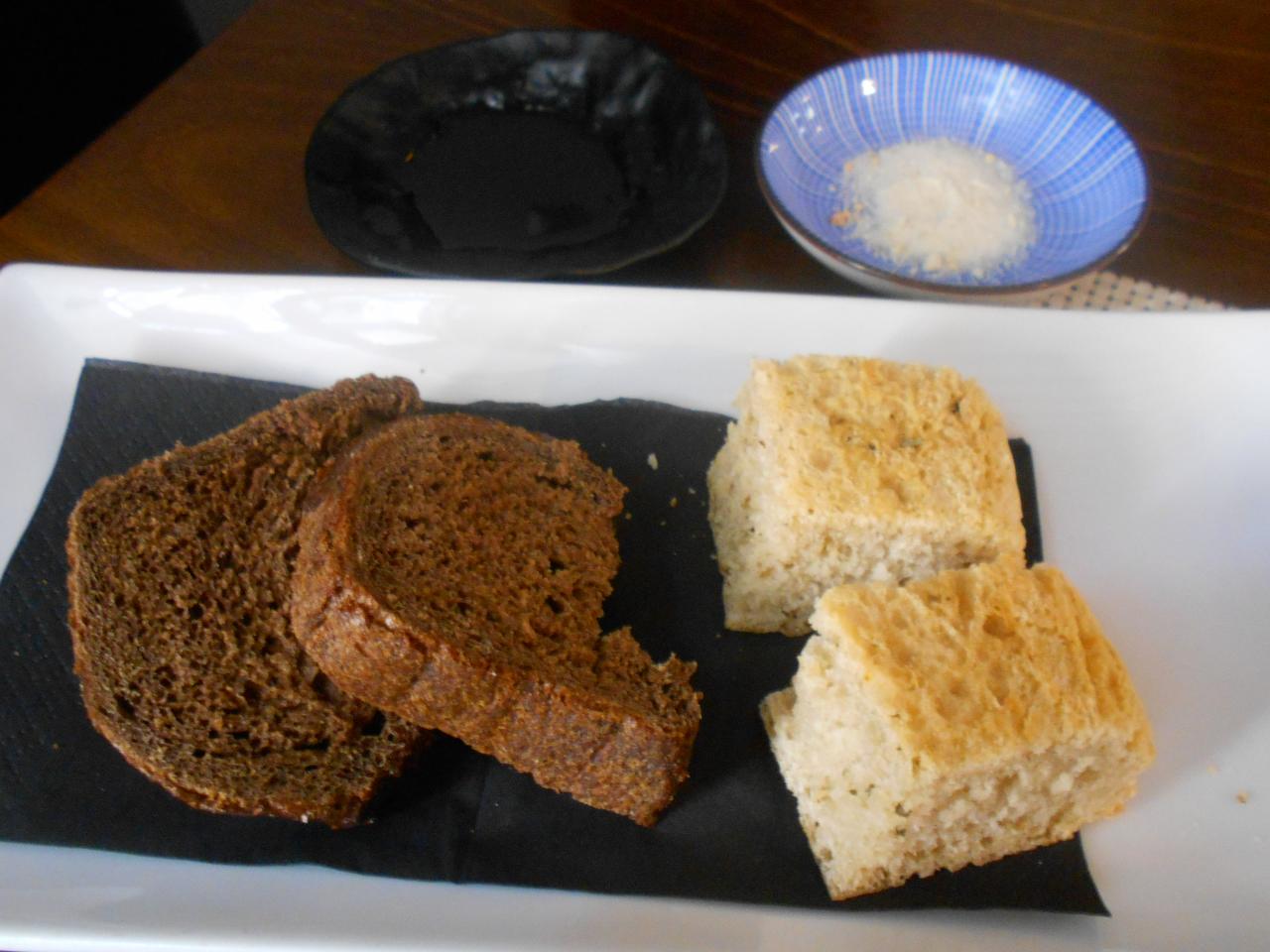 The breads also came with little bowls of olive oil and an unusual salt, which added other layers of taste. The salt contained a touch of ground herbs and specks of dried orange. Little surprises like that help to make a meal memorable.

My starter was a coca made with the heirloom flour ‘xeixa’ that was recently rediscovered by some of the island’s more creative bakers and has now found a niche in the market. The topping of baked aubergine and Mahón cheese gave the coca lots of succulence and flavour.
My friend loved his ‘nero di seppia’ spaghetti, the pasta strands black with cuttlefish ink and blobs of colour coming from gambas and chopped cuttlefish. 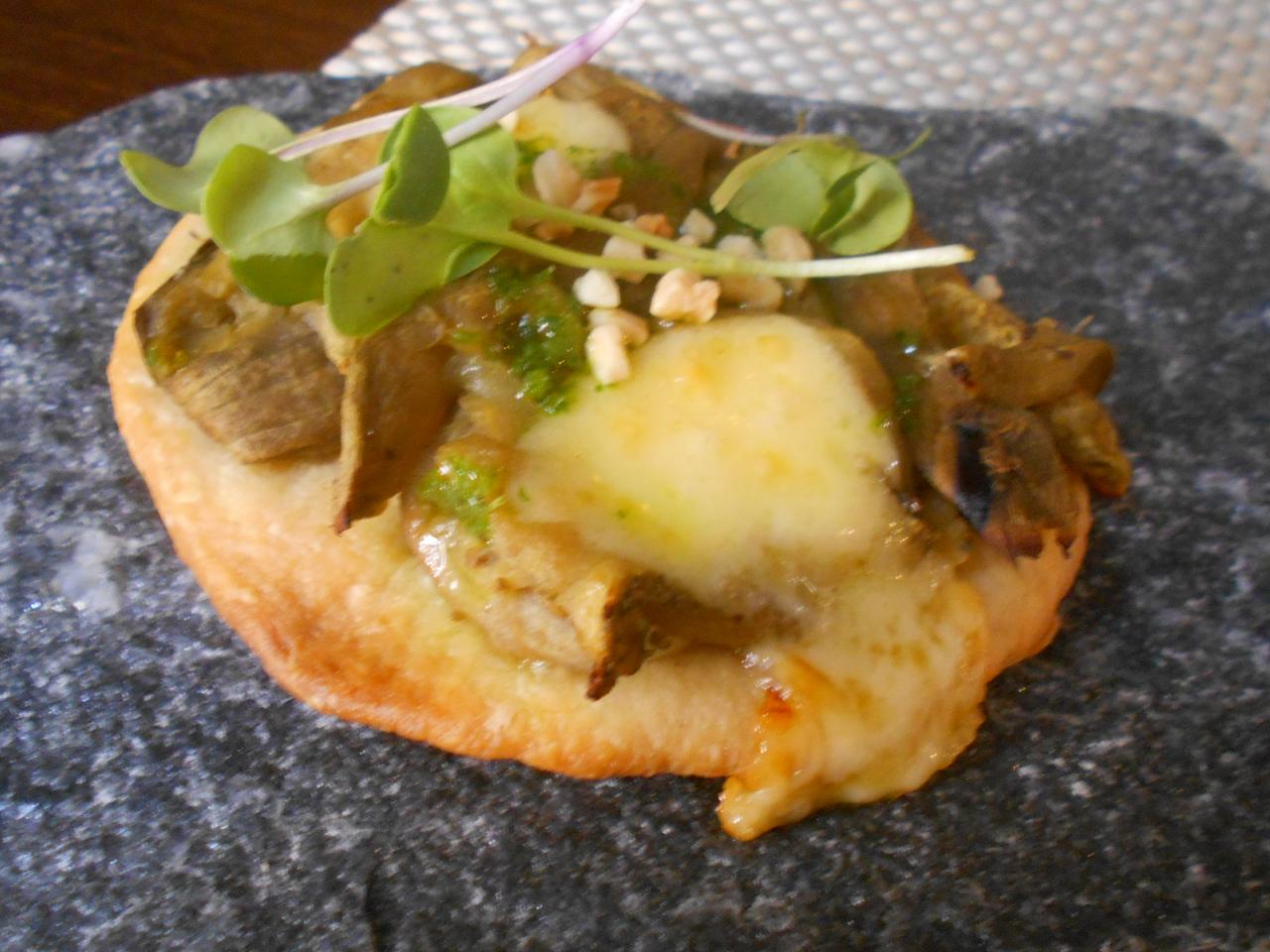 His mains of loin of pork from the island’s black pig came with a barbecue sauce flavoured with the juice of Sóller’s ‘canoneta’ oranges.

But the dish was badly presented, with an avalanche of the bright red sauce obliterating the other ingredients. I tasted a piece of the thick-cut lomo, and it was absolutely delish. They should display it in a more attractive way.

My mains, on the menu as ‘cous-cous de pescado y verduras’, was a complete misnomer because it was simply fish (in this case salmon grilled separately on a hot plate) served beside a mound of very nice cous-cous and veggies.

But worst of all was that the salmon was so overdone it had lost most of its moisture and fat and was dry and tasteless. It wasn’t inedible, but it wasn’t very enjoyable.
Just as the two breads got the meal off to a fine start, the two desserts brought it to a fanfare end. 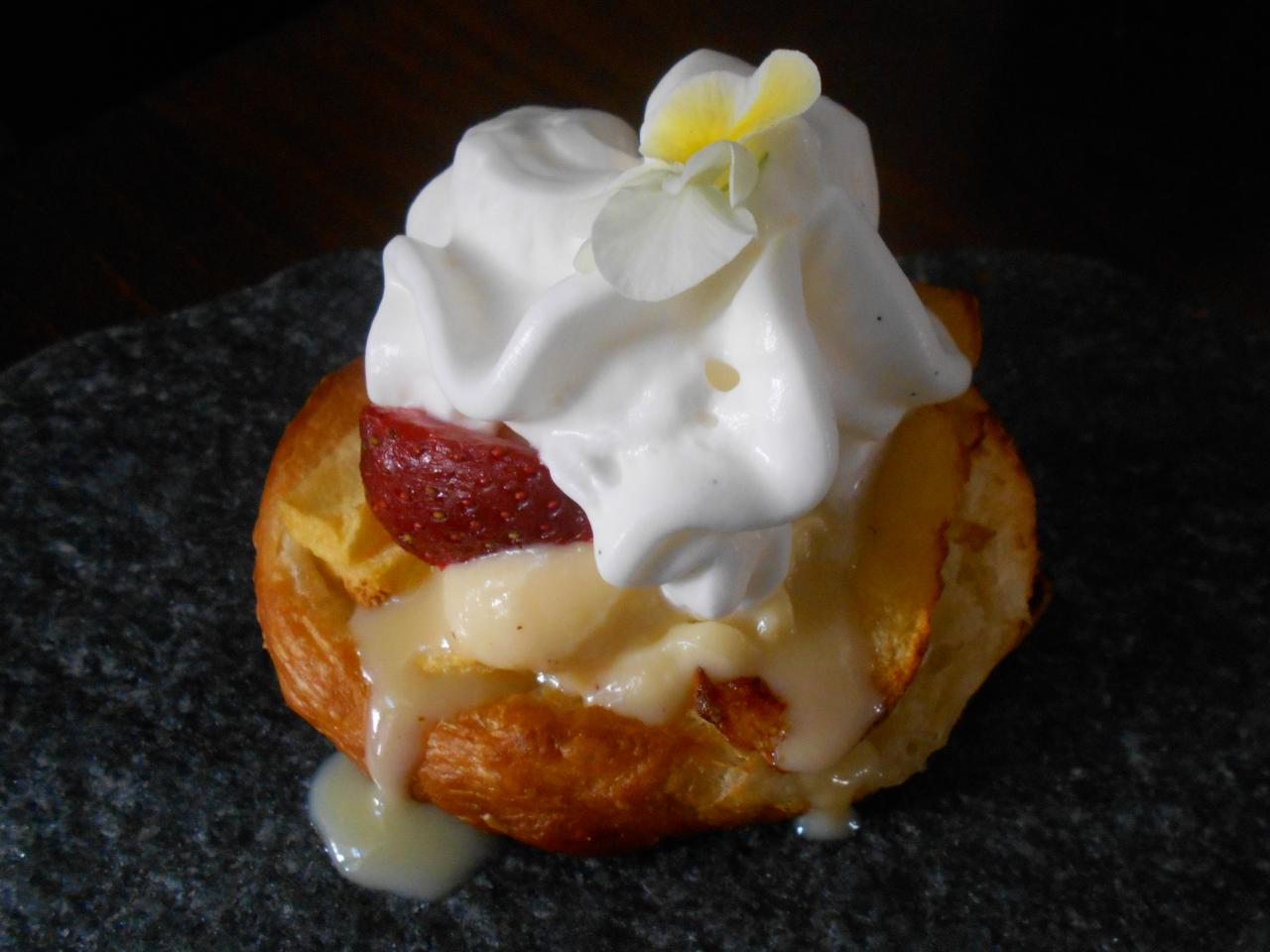 One was a ‘tatin de ensaimada’, a Mallorcan take on the tarte tatin that uses ensaimada dough instead of the usual French pâte brisée. My friend said it was a most successful pastry and, as it was nicely warm, he had the impression it was made to order.

Their home-made strawberry ice cream was a beauty: a good matte colour, very smooth on the palate and bags of strawberry flavour.

Although there was one rather bad fault, we had a thoroughly enjoyable meal at Ca’n Boqueta and the Sóller town house ambience was a delight. The two home-made breads were a huge success, and although they came with little bowls of good olive oil and salt, you could have eaten them on their own and still found them marvellous.

Both desserts were excellent. The cook at Ca’n Boqueta has a reputation for doing fabulous rice dishes. I’m looking forward to returning to Sóller, sooner rather than later, to try one of his paellas.

As they cannot be at full capacity for the moment, it’s best to book. And if you visit Sóller as infrequently as I do, then you can make a day of it and stroll around the town before lunch and afterwards nip down to the port for a post-prandial drink at one of the terraces looking out on to the bay. It’s a lovely way to spend the day.