Food and Wine: Salmonetes - One of the best fish in the Med is now into its summer season

The salmonete features in every Mediterranean cuisine

The official season for salmonetes (red mullet) is from May to August and they are very much associated with summer. But salmonetes are one of those fish that are available all year round and it is also at its best from October to December, when they are particularly big and fleshy.

The salmonete has been connected with the Mediterranean since written records were first kept. Archestratus, one of the earliest food writers of the ancient world, mentions the salmonete de roca in the few pages of his writing that still exit.

He cooked for the Athenian general and statesman Pericles (495-429BC) and among his gems of advice in the extant fragments of his work are the words: “Remember you should season delicately fleshed fish with only oil and fine salt, as that is the only way to conserve the virtue of its good flavour…”

The finest fish cooks have been following that advice for 2,500 years and they make a point of serving most fine fish in as simple a way as possible.

When a restaurant does fish with elaborate sauces and fussy garnishes, you immediately know the cook doesn’t understand how fish should be treated. And he certainly has never heard of Archestratus and his wise words of advice.

The ancient Romans considered salmonetes to be one of the most exquisite fish in the Mediterranean but they disliked the natural taste of fish, meat and vegetables and always hid it under complex mixtures of spices, herbs and liquamen, a salty liquid made with the entrails of rotten fish.

A Roman sauce for grilled salmonetes was made with pepper, lovage, rue, honey, pinenuts, vinegar, wine and liquamen. These ingredients were heated together and then poured over the grilled salmonetes. It doesn’t sound like a 10-rated dish to me.

The salmonete features in every Mediterranean cuisine. Mallorcans are particularly fond of salmonetes (called moll in Catalán) and they are always at the main markets. They are also an essential item on all the specialist fish restaurants.

There are two kinds of salmonete: Barbus surmuletus and Barbus barbatus. The first is called salmonete de roca (rock red mullet) because it inhabits stretches of sea with pebble beds.

The other is called salmonete de fango (muddy red mullet) because it is found on muddy seabeds. 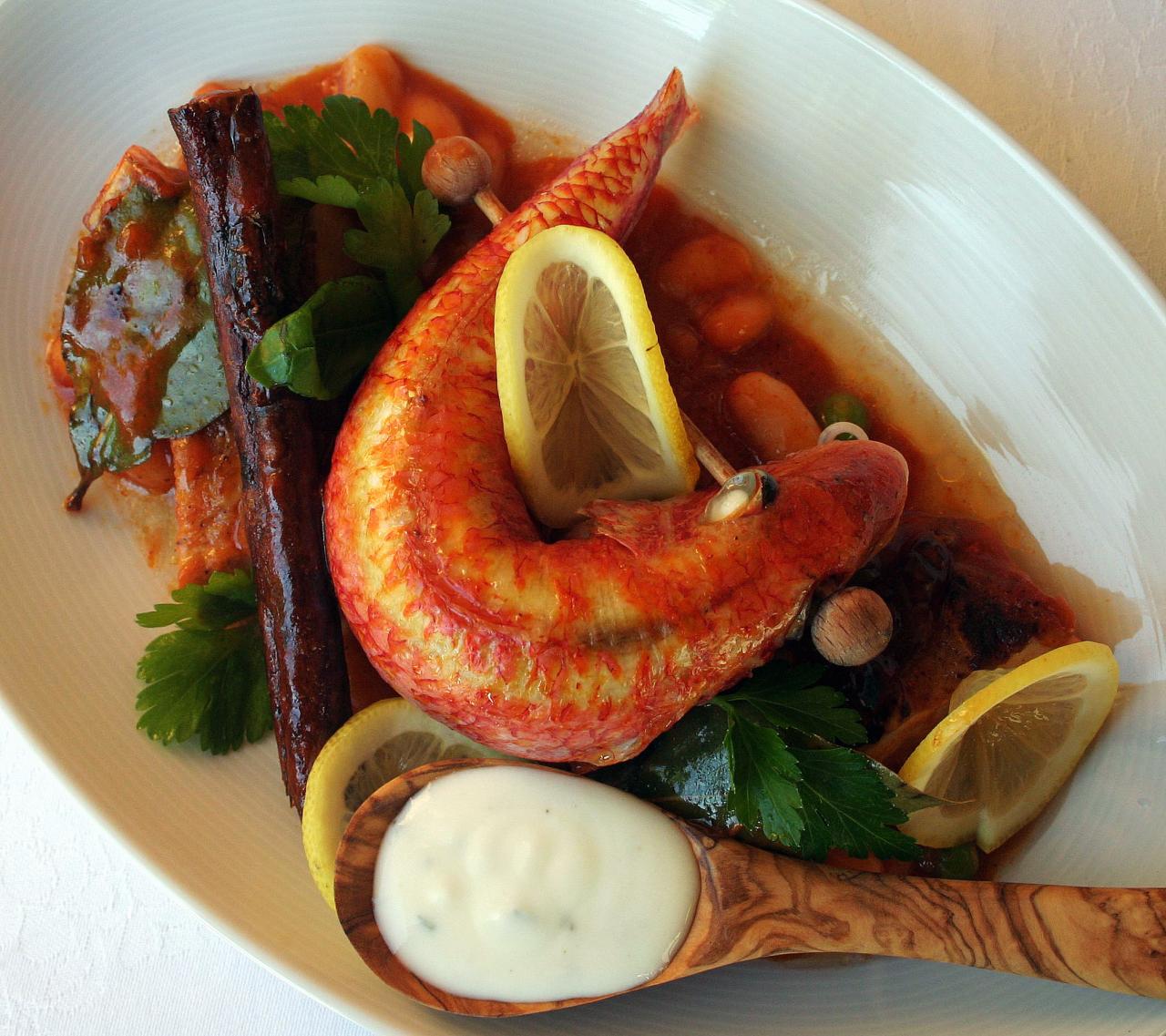 The better of the two is the salmonete de roca, which has a firmer flesh and a subtler taste. The other one has a somewhat muddy water flavour.

Salmonetes de roca are easy to pick out at the fish market. They usually have a deep red colour and have stripes on their first dorsal fin and yellow stripe on the flank. And you’ll see a card announcing they are salmonetes de roca. They will also be dearer.

But if you are looking at fish with a pink-like hue and rather anaemic compared to the bright crimson of the other salmonetes, then you are almost certainly being offered salmonetes de fango.

It’s not that we should reject this species. They can be good eating, but they are not in the same class as the salmonetes de roca — which is why they are always cheaper.
Watch out for those stalls that sell a mixture of both species. It’s an underhand and dishonest way of pushing the salmonetes de fango on to their customers.

Busy housewives and novice cooks will be pleased to hear that the salmonete is an easy fish to deal with in the kitchen: its taste is so delicate it cries out for the simplest cooking methods. 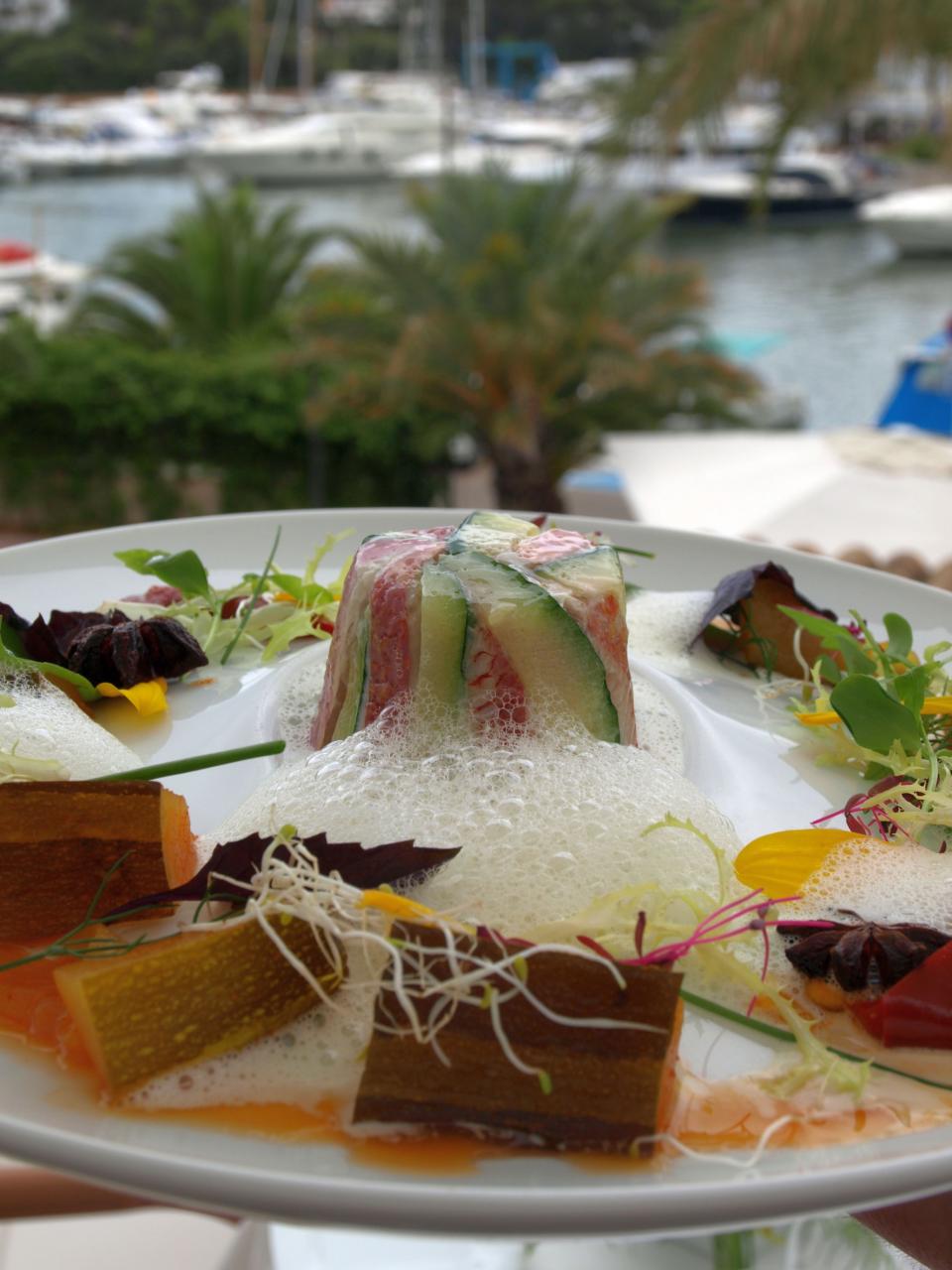 These include frying, grilling and baking with very little in the way of embellishments. Some fresh herbs, however, enhance the flavour of the salmonete de roca.

Fennel is particularly suitable and so is basil. And for a taste sensation that’s different and memorable, try them with a touch of fresh rosemary.

This recipe with fennel is excellent. Line a suitable oven dish with plenty of fresh feathery fennel leaves and put it into a medium hot oven for about 15 minutes or until the foliage has dried out and becomes crispish.

Put the cleaned and well dried salmonetes on top of the leaves, drizzle them with olive oil, grill them for short time on a high heat (salmonetes need very little cooking) and set the leaves alight before serving the fish.

Always leave the heads on regardless of the cooking method used. And you must never forget that cooking times must always be very short or the fish will become dry and tasteless.

Loosely cover the dish with tinfoil and put it into a hottish oven for 20-30 minutes or until the potatoes are cooked.

Take the tinfoil off, put the cleaned and dried salmonetes on top, drizzle them with olive oil and scatter about 50 grs of pinenuts over the surface.

Put the uncovered dish into a medium hot oven for 10 minutes or so. The cooking time will depend on the size of the fish and the temperature of the oven. Take special care to avoid overcooking the salmonetes.

In Mallorca and other parts of Spain, small salmonetes are one of the few fish that are eaten without being descaled, gutted and cleaned.
The fish as they come are simply grilled, ideally over glowing barbecue ashes, and then eaten with the fingers.

The scaly skin is slipped off with the thumb, and the flesh is nibbled off, first one side and then the other. The innards give the fish a quite distinct and exquisite taste.
This method of cooking and eating is also done with sardines which, of course, makes it a more economical nibble.

There’s something primitive about eating fish of any kind with your fingers but that was how they did it in the days before the invention of table forks, because it was a natural way of eating. It still is.

But it is rather messy and some people prefer to use a knife and fork. But I’m sure old Archestratus, like the true Mediterranean connoisseur he was, preferred his fingers.