A resident breeder on Mallorca, this is the one species of raptor that will usually be seen before any other, especially if one is in a marshland area, and undoubtably the best place to see them in good numbers is at the Albufera, where they can be watched close in patrolling in front of the hides and over the reedbeds in search of prey.

They are birds of the harrier sub family, medium sized and the largest and broadest-winged harriers and are found almost worldwide excluding only the Americas.

The Western Marsh harrier (Circus aeruginosus) is known simply as the Marsh Harrier and breeds across Europe and Asia. Many winter in Africa. They are a typical harrier with long wings held in a characteristic ‘v’ shape in its low flight. They also resemble other harrier species in having distinct male and female plumages.

Ducks and waders form their diet which also includes insects, fish and frogs which it can pluck from the water with its long legs mid-swoop. When I have been at the marshes, whether it is dawn or dusk, this is usually the first and last species to be seen over the reedbeds. A passing harrier always causes a commotion amongst the ducks and waders, and gulls, terns and even the Black-winged Stilts will have a go at driving them away. 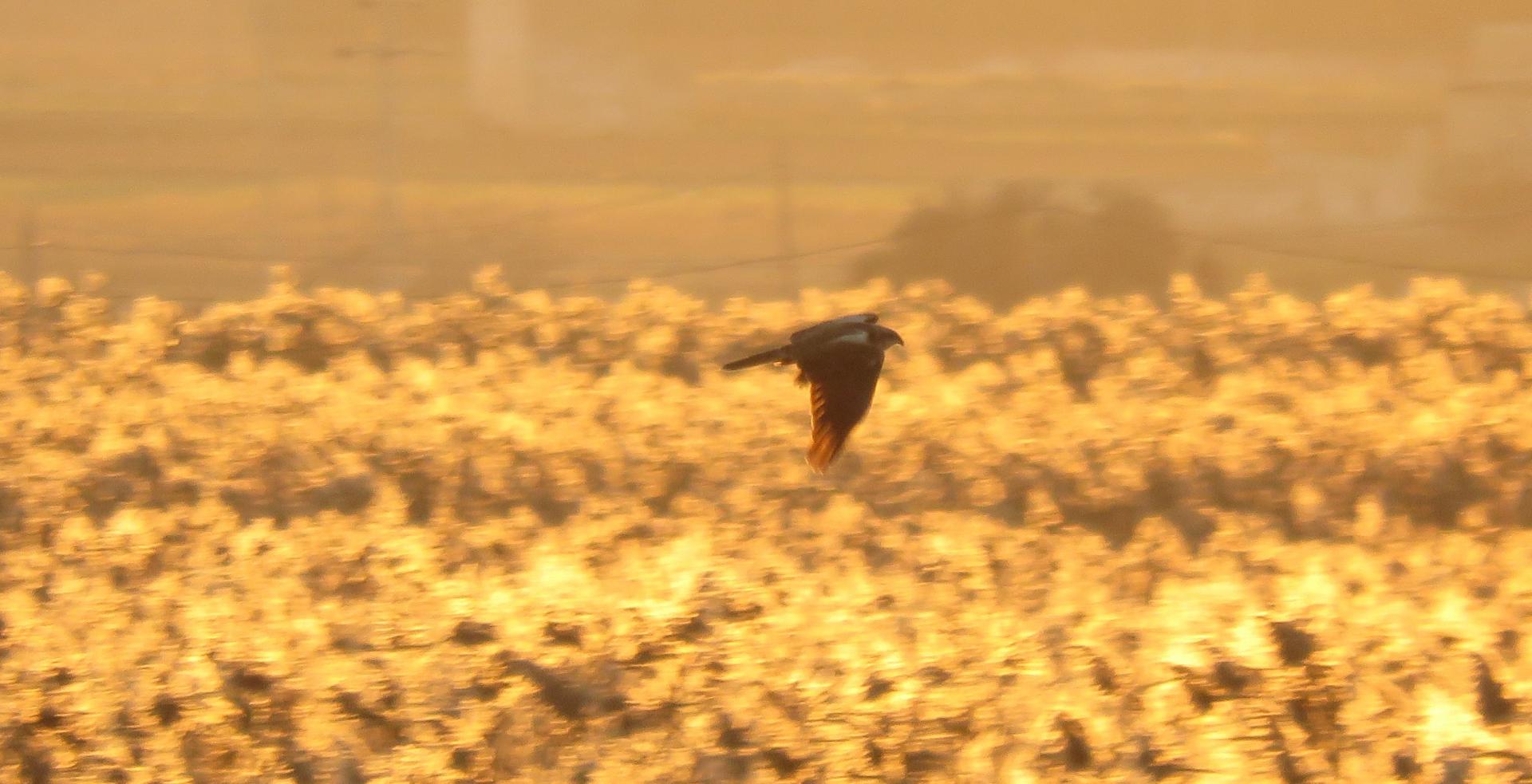 I have had some wonderful moments watching them, especially recollecting one early summer evening as the sun was starting to set, and an orangey-golden glow covered the reeds, and there almost silhouetted was a Marsh Harrier going off to roost.

It was a lovely scene and so was a very early morning near the entrance of the Abufereta Marsh where, as I walked along the coast road, I was admiring the still, almost mirror-like sea ahead of me, and in the distance I could see an approaching raptor low over the water.

As it got closer, I could see it was a Marsh Harrier, its wings almost touching the surface of the water which was reflecting off her belly. She passed right over me and headed into the nearby marshland.

I didn’t even attempt to get my camera out, it was one of those moments where simply watching the scene was better than any photo, and is a memory that has stayed firmly in my mind.

The female has an almost chocolate-brown plumage except for a pale buff-coloured forehead, cap, throat and leading edge to the inner wing. The buff cap can be a good identification feature even from a long distance away. The juvenile resembles the female but has less distinct paler markings. 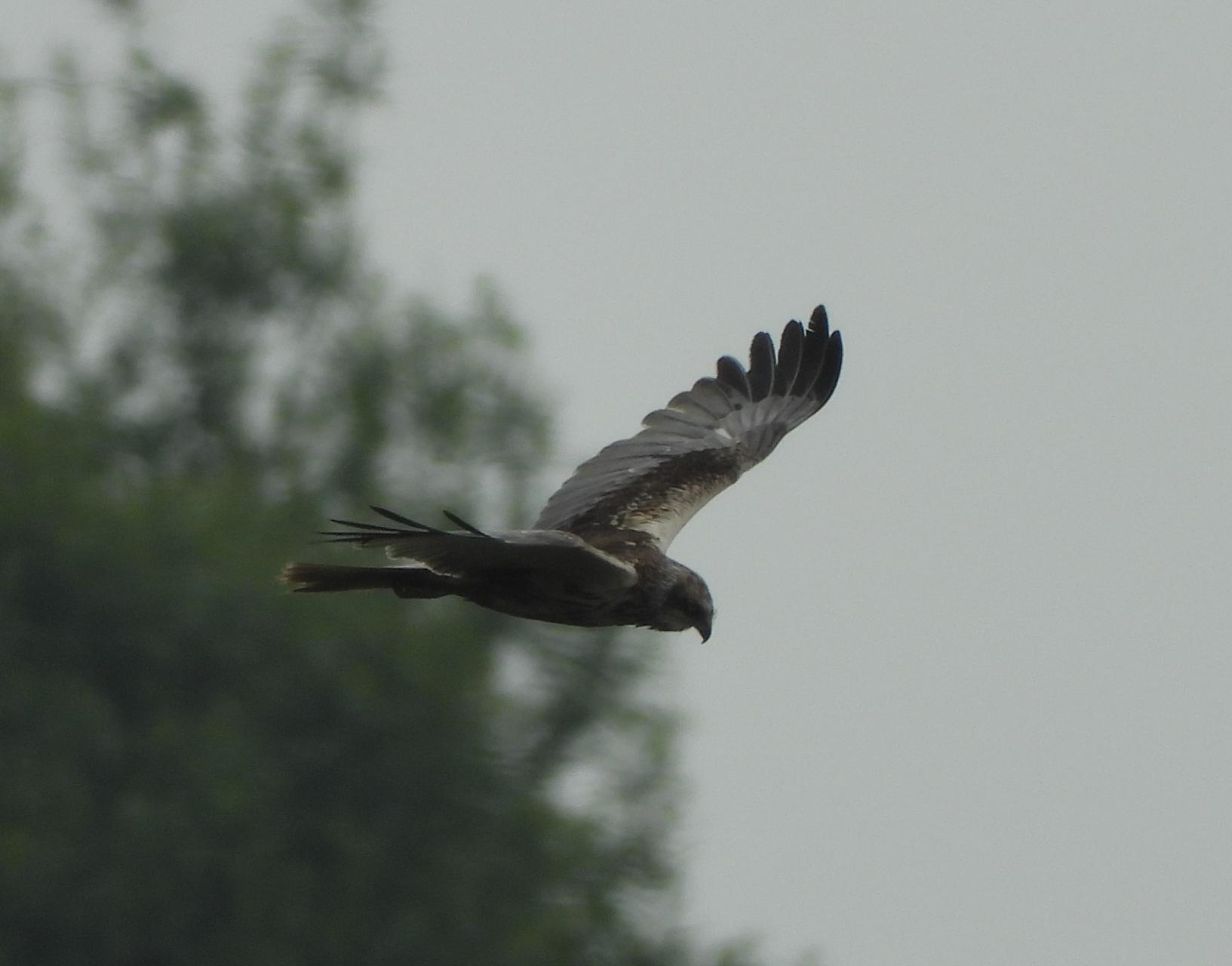 The male looks quite different, and seen from above he has a dark-brown back and wing coverts which contrast with blue-grey flight feathers and tail. The wingtips are black and the head and leading edge of the inner-wing a pale grey-buff. Seen from below, the underwing is blue-grey except for black wingtips. The body is dark brown with a grey tail. Males can take up to three years to get the pale plumage parts.

The voice is a plaintive shrill-like ‘kweeoo’. They have a wingspan of 115 - 130cm and a weight of 500 - 900g, and these large wings allow the harrier to ‘quarter’ the reed beds in a slow and graceful manner when hunting. This is how I discovered the Glossy Ibis as a wintering species here (previously it was noted in some books and by resident birdwatchers as an uncommon migrant).

One December evening I was on a viewing platform at the Albufera waiting for the Starling murmuration when a harrier passed over the reeds and flushed six Glossy Ibis I didn’t even know were there. Over the subsequent winters in the same area of the reserve I found them again and again, and have seen lower number at other times of the year too - thank you Mr Harrier. 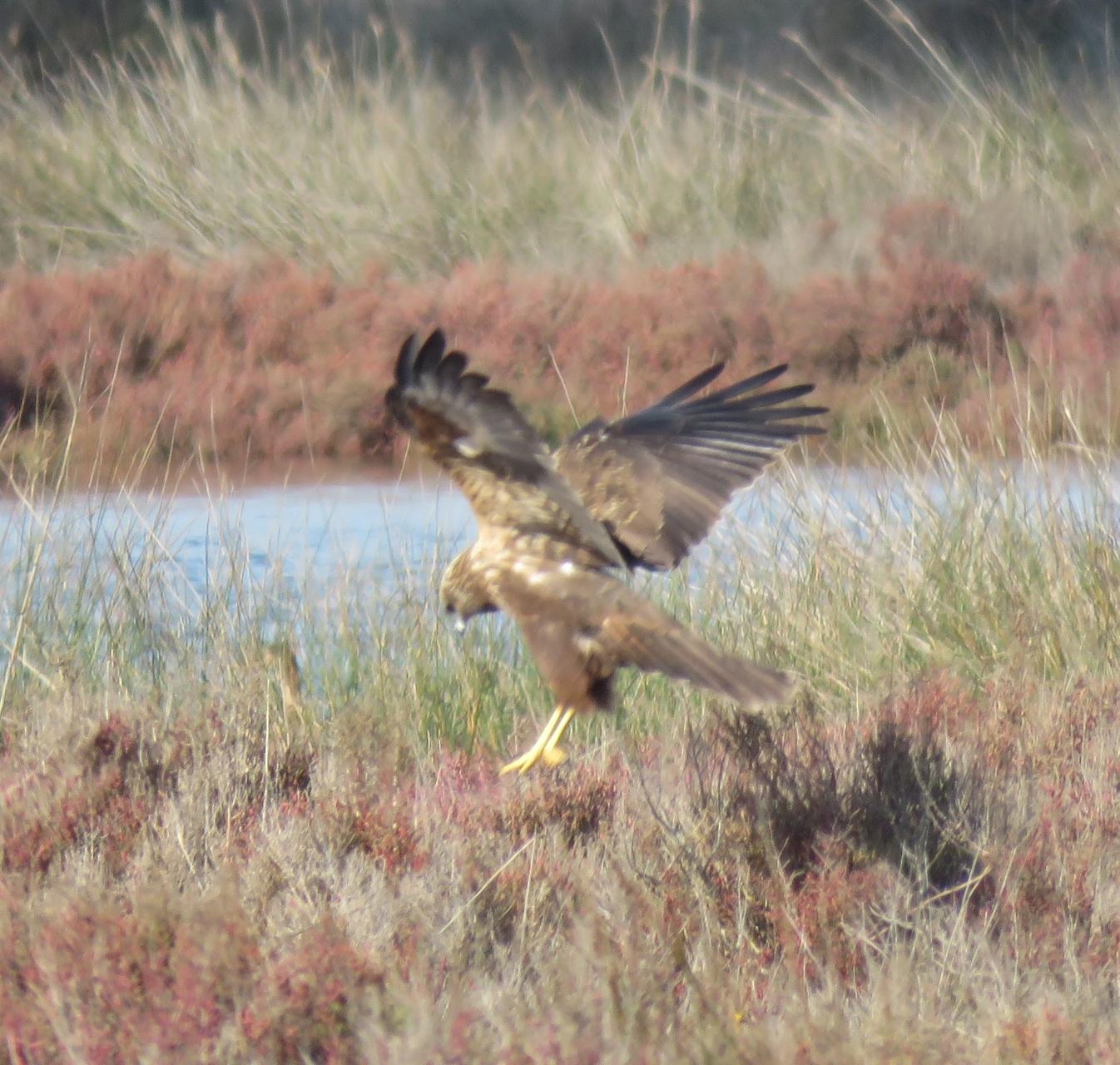 During courtship, the male can circle to great heights where he will perform a dramatic, swooping display. The nest is a bulky structure consisting of reeds and twigs built among the reeds, where 4-5 bluish-white (often stained) eggs are laid. With amphibians, birds and mammals forming their diet, there is an endless supply of food in the marshes and will explain why a number of pairs can nest and hunt in the same area without too much conflict.

Occasionally, this graceful and elegant bird can be seen perched in a tree, but mostly they are seen in flight, low over the ground or reeds where the long wings and tail are noticeable, and legs often seen dangling. They can be a feisty bird too, and although they tend to tolerate other harriers, I have on occasion seen them make their discontent known when a Booted Eagle or Red Kite comes in too close over their territory.

The patient observer may be lucky enough to see the spectacular food passes, where the female takes to the air and turns upside down to receive prey from the male’s talons - now that is an aerial display to marvel at. For me, solitude and quiet over a marshland scene, with the occasional call from a sandpiper or egret, interspersed with the Sun setting behind the distant mountains, where the golden glow over the reeds sees a lone harrier making its way to the roost site, now that makes one feel good.