A connoisseur can get a good idea of how a wine will smell and taste simply by looking at the contents of his glass: several tell-tale signs provide vital clues.

The same thing happens in cooking. If you know what to look for, you can tell how a dish will taste simply by using your eyes. Tumbet, Mallorca’s famous summer veggie treat containing potatoes, aubergines, red pepper and tomatoes, is such a dish.

When helping yourself from a dish of tumbet, if you don’t strike oil as you dig in with the serving spoon, the chances are it won’t be a memorable version of this dish.

Tumbet, like almost all dishes that call for aubergines, requires the generous use of olive oil: if you’re mean with it you’ll never make a satisfactory tumbet.

The other day at a Mallorcan friend’s house I saw the remains of a lunchtime tumbet in its serving dish. On the bottom of the greixonera were traces of oil with tomato sauce streaks. The potatoes looked shiny and had a reddish hue from absorbing oil and some of the tomato sauce.

The slices of aubergines looked softish but, more importantly, I could see they had also soaked up oil and tomato sauce. A mere spoonful was enough to confirm that this was an authentic and superb tumbet. In Spanish regional cooking there are many dishes that call for good amounts of olive oil, which is the main reason the uninitiated sometimes think of it as being an oily cuisine.

So with aubergine dishes such as tumbet, one of the golden rules is: be generous with the oil. Another is to use virgen extra olive oil. Everything in a simple dish like tumbet must be of the highest quality.

Tumbet is a relatively easy dish to make but it requires care and attention and the very best of its four ingredients.

Apart from virgen extra olive oil, you should get Majorcan aubergines (they are sweeter than those from the mainland), thick red peppers, Mallorcan remallet tomatoes, and the kind of potato that doesn’t disintegrate when cooked soft.

This island speciality is a laid-back kind of dish in that it is prepared in advance and in easy stages, so there is no last minute rush to get it ready for the table. It’s a fun dish to make. You should use a flattish greixonera although the earthenware dishes called cazuelas are also suitable.

The amounts of the four ingredients depend on the size of the serving dish you are using. There should be enough of the veggies to make a good single layer of each one.
Start off by making a thick sauce with two kilos of remallet tomatoes. Plum tomatoes, called tomates pera in Spanish, are a good second choice. If you use a vegetable mill, simply chop the tomatoes and sauté them in plenty of virgen extra olive oil for 45 minutes or until you have a thick pulpy sauce.

Put the sauce through the vegetable mill and reduce further over a medium heat if necessary. The sauce must never be watery.

If you are not using a vegetable mill, peel the tomatoes, chop them finely, and sauté them as before. In either case, the sauce should be very thick and slightly oily. Garlic and herbs of your choice can be added, as well as salt to taste. By being liberal with the sauce you will ensure the tumbet will be well lubricated and succulent. If you end up with too much sauce, the remainder can be used for a pasta dish. 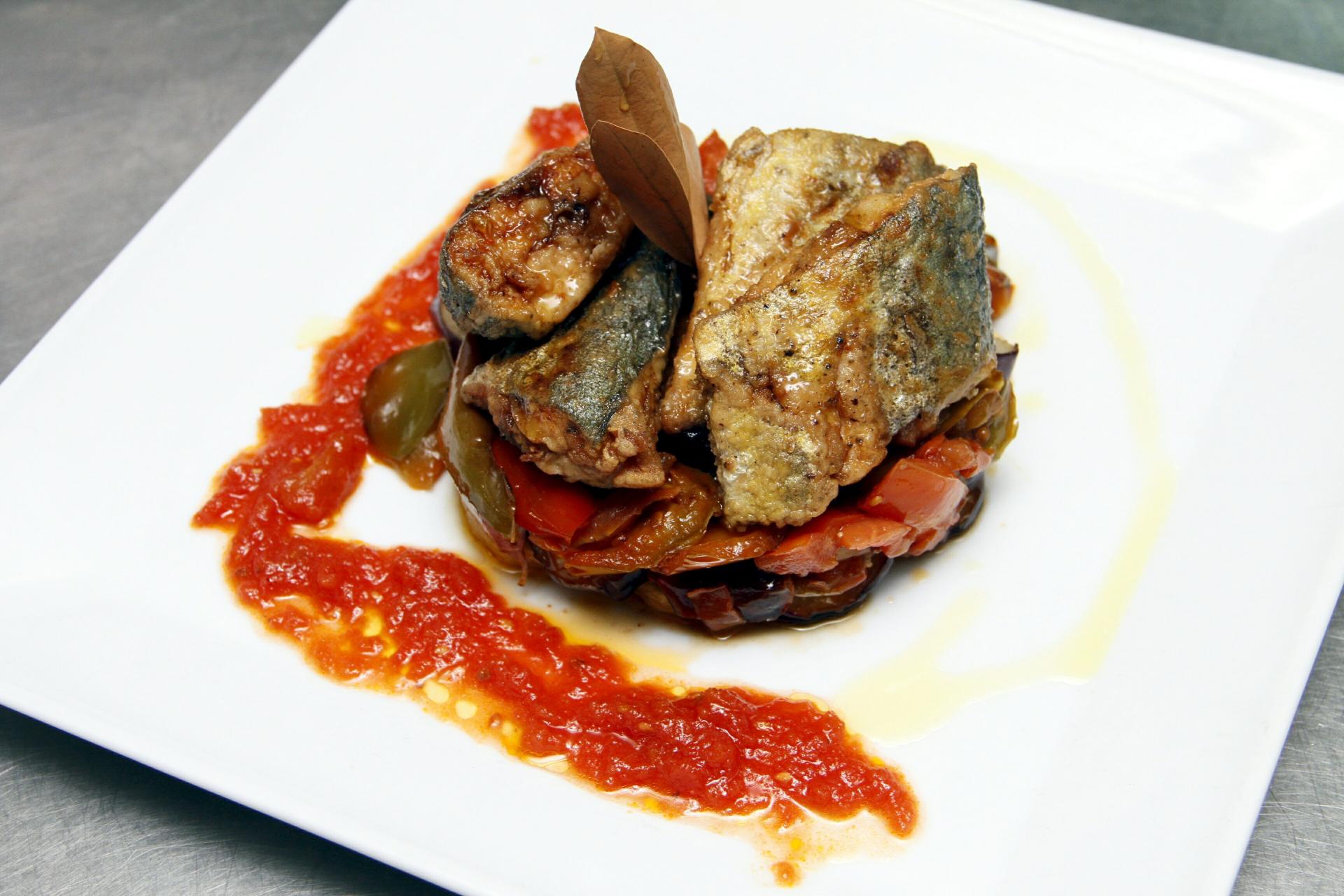 Slice the peeled potatoes into thinnish rounds (as for a Spanish potato tortilla) using a sharp knife or a mandolin. Sauté them slowly in plenty of virgen extra olive oil. They must be done slowly because you don’t want them to brown.

You will also get good results by putting the sliced potatoes into an ovenproof dish, mixing them in plenty of oil, covering the dish with tinfoil and baking it in a medium oven for 40 minutes or until the potatoes are soft. Add salt and pepper to taste.

Slice the aubergines into rounds of about 1cm thick and sauté them in about 2cms of olive oil. Keep the heat at medium so they don’t scorch. Transfer them to a plate when they are soft.

Buy the thick red peppers called pimientos de asar and break them into bite-size pieces. Majorcan housewives of the old school never cut red peppers with a knife. Sauté the red peppers until they are slightly al dente and put them on a plate.

To assemble the tumbet, first put a layer of potatoes into a flattish greixonera, cazuela or a rectangular earthenware oven dish. Top it with a layer of aubergine slices and then spread the pieces of red peppers over the surface.

Finally, cover the surface with the thick tomato sauce. I repeat that the sauce must never be runny. You cannot make a memorable tumbet with a watery sauce.

At this stage, some Majorcan housewives and cooks like to put the tumbet into a medium oven for a short time. Others never do it. Try it both ways and see which you prefer.
But is is essential that the tumbet is left for at least a couple of hours to give the flavours time to mingle.

Tumbet can be reheated in the oven before serving, but all Mallorcans I know always serve it at room temperature. It is, after all, a summer dish par excellence. 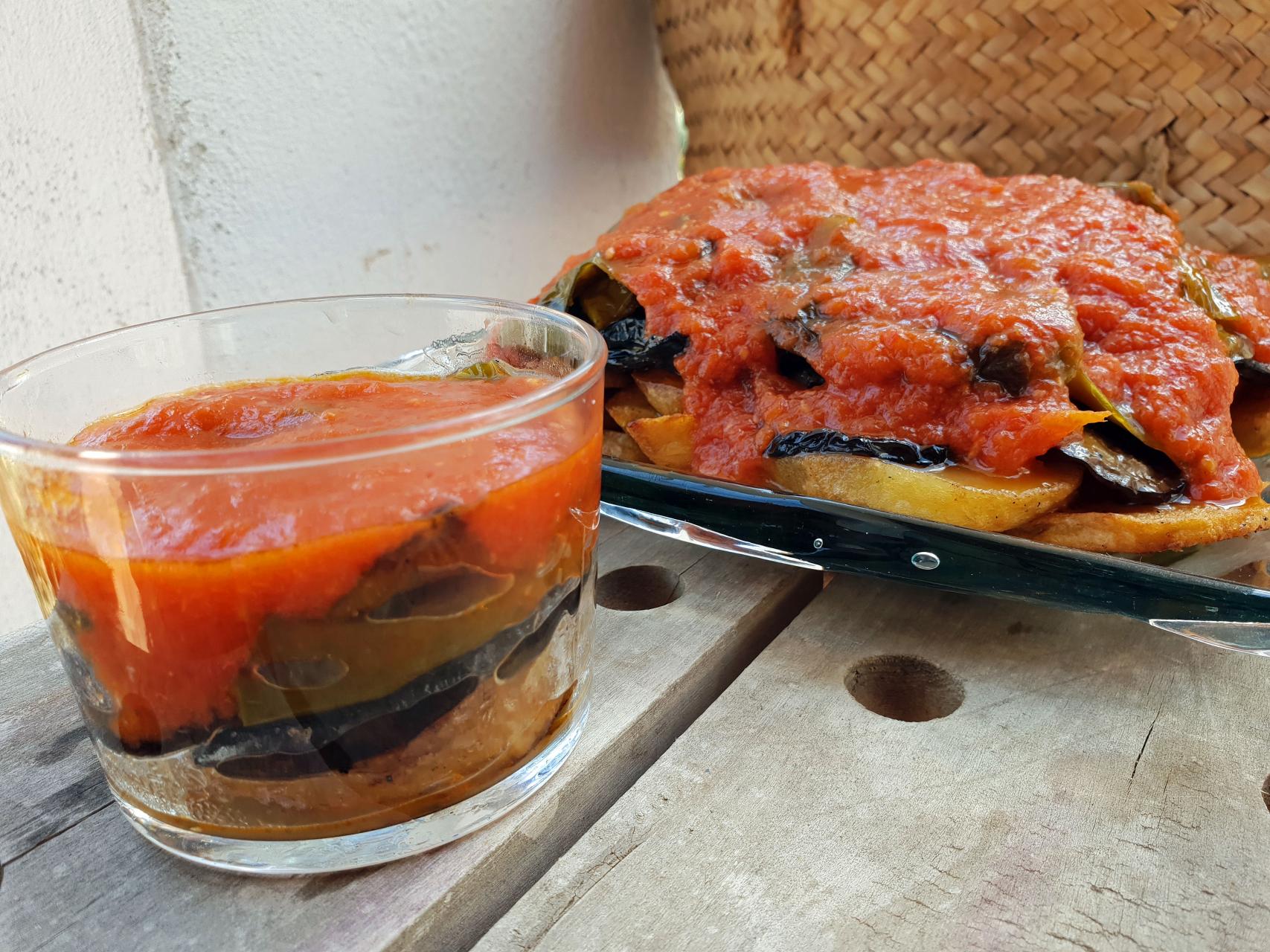 Sometimes slices of sliced courgettes are added with the aubergines, but the purists say this makes the tumbet less authentic. I agree with the purists.

Some Mallorcans assemble the tumbet with slices of grilled lamb or pork loin. In coastal areas, nuggets or monkfish or other firm white fish are added.

But other Majorcans prefer to serve freshly grilled lamb chops, sliced pork loin (lomo) and other meats on the side.

If you have any leftovers, keep them in the fridge because in the summer heat the ingredients would quickly ferment. But don’t serve it straight from the fridge: room temperature is aways best.

Leftovers can be mixed into beaten eggs to make a flat Spanish tortilla. You can also chop up leftover tumbet, reheat it and use if as a filling for a French style omelette.