Say Rioja to most people and they immediately start to think of red wines with fine colours, heady aromas, great taste and reasonable prices. But there’s much more to La Rioja than that.

Many fine dishes have come out of this wine-producing area and one of the most popular is the chilindrón.

But chilindrón isn’t so much a dish as a style of cooking in which chicken and other meats are made with tomatoes, red peppers and onions. This way of cooking is popular along the river Ebro, especially in La Rioja but also in Aragón as well as parts of southern Navarra.

The origins of this dish aren’t known but most experts agree the best chilindrón dishes are to be found in La Rioja, although Aragon’s chilindróns are also highly rated.

The chilindrón style of cuisine is in the simplest of rustic traditions and consists of cooking meats with tomatoes and red peppers, plus the option of veggies from the Ebro area such as onions, peas and carrots.

In most of the classic recipes, however, cooks limit themselves to tomatoes, red peppers, onions and garlic. Even so, there are many variations on the basic theme.

Video showing how to cook this recipe ( In Spanish ):

The chilindrón style of cooking sometimes goes under different names. A chilindrón in La Rioja can be a sauce called fritada made with red peppers, tomatoes, onions and garlic, cooked together in a frying pan over a low heat.

A chilindrón can also be a sauce made with tomatoes, onions, garlic and carrots — no red peppers this time. When tomatoes are reduced to a thick sauce with the addition of roasted red pepper strips and served with slices of fried ham, that is also a chilindrón.

Slices of roasted red peppers and finely chopped garlic, a feature of several Riojana dishes, also go under the chilindrón name. Cooks talk of a chilindrón when dried red peppers are used to flavour soups, fish, meat and poultry during the winter months.

You find a tremendous amount of variety in the chilindrón style of cooking depending on the main ingredient and the imagination of the cook. A simple dish, such as a couple of fried eggs, demands a simple chilindrón — either a plain fried tomato sauce or strips of roasted red peppers.

From those small beginnings, the chilindrón can grow until meats of various kinds are being cooked together with the basic ingredients plus peas, carrots, green beans and similar veggies.

La Rioja is salt cod country and one of the ways of doing it is bacalao al chilindrón. The tomatoes, red peppers and onions are ideal for adding a velvety succulence to this fish.
As there is no liquid left when a chilindrón dish is cooked, it travels well and is delicious cold — which makes it perfect picnic food. A chicken chilindrón is a favourite with families going for a day out in the mountains. 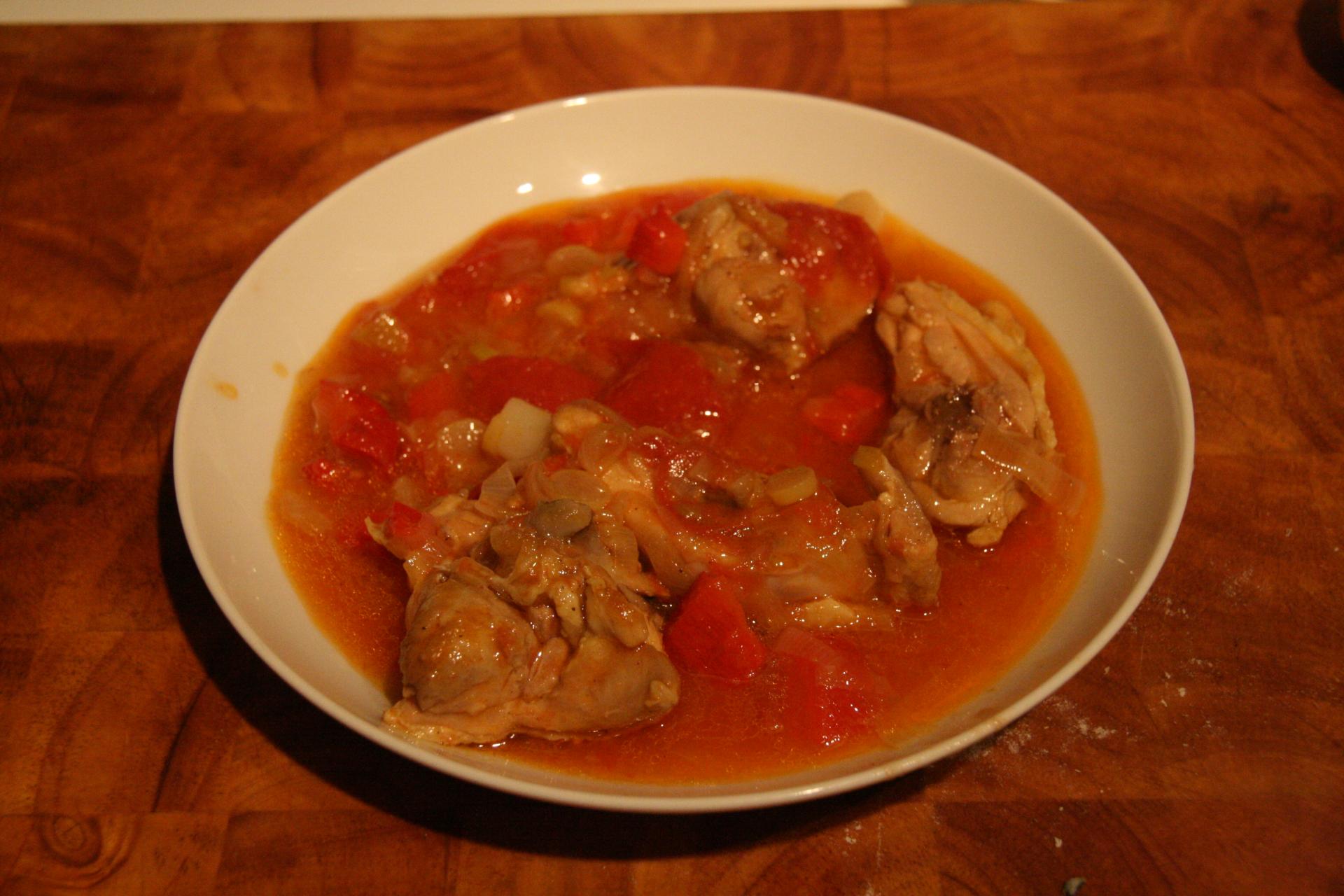 Cooking a chilindrón is simple enough but it needs care and some patience, as everything must cook ever so slowly. It’s the kind of dish that’s easily ruined if you try to rush it.

Heat the oil in a large frying pan or a flattish greixonera and sauté the onions carefully for 10 minutes, stirring frequently. Add the finely chopped garlic, taking care that it doesn’t get brown. Sauté the chicken pieces until the skin is of a nice golden colour.

Add the strips of ham and sprinkle in the roughly crushed peppercorns. Bear in mind the ham is somewhat salty and you may not need to add any extra salt. Then add the tomatoes and red peppers and cook very slowly until the chicken is tender.

The tomatoes will reduce to a thick sauce and the chicken will absorb some of it and the flavourings.

Eat this dish with slices of Mallorcan pan moreno or a crusty barra rústica and drink a Rioja red with plenty of body. Or, for a change, try one of the Aragón reds in the price range that suits your budget.

A lamb chilindrón can be done in the same way using a shoulder chopped up into individual serving pieces with the bone intact. Some cooks add extra flavouring such as a few threads of saffron, sprigs of parsley, rosemary or thyme.

The cooking of La Rioja also has a well defined sweet side for those who must finish a meal with a delicious dessert.

As in other parts of Spain (including Mallorca) many of La Rioja’s pastries, cakes and desserts have origins that date back centuries to the days when the Iberian Peninsula was under Arab rule.

Two pastries that could have come straight out of an Arab cookbook are the fardalejos of Amedo and the little marzipan cakes of Soto de Cameros.

Amedo is the only place in Spain that makes fardalejos, a word whose etymological roots are in the Arabic for an ancient tax and which also means to be obsequious to someone out of respect, fear or self-interest.

It is made with thin puff pastry and the filling is ground almonds, sugar and beaten eggs. The edges are cut and sealed with a ridged pastry cutter. The little bundle is deep-fried in olive oil and dusted with icing sugar.

The fardalejo is somewhat reminiscent of the Arab baklava, which is baked and whose filling can be almonds walnuts or pinenuts. The baklava is also much sweeter as it is drenched with heavy syrup or honey before being served.

Amedo’s most famous pastry is made manually using traditional methods handed down from family to family since the days of Arab rule. Nowadays only two families make them. In the animal world it would be considered a highly endangered species.

La Rioja’s other renowned pastry is in no danger of disappearing. It is mazapán de Soto and in 1989 it was awarded Dominación de Calidad status (DOC) by the Autonomous Community of La Rioja. This is a way of protecting high quality products by ensuring the makers follow strict standards set by the local government controlling body.

These little marzipan cakes don’t have the same pedigree as the fardalejos because they date from the end of the 19th century when a pastry maker in Soto de Cameros started to make them.

Soto marzipan differs from those in other parts of Spain in that the sugar is added to the ground almonds in the form of a thick syrup. The addition of this syrup and low oven temperatures ensures that the Soto marzipan is softer than in other places.

When the little cone-shaped cakes are formed no pressure is put on them, so the paste is loose rather than compact. The whole process is done by hand and is therefore costly, but it results in marzipan cakes that are light and moist and with an exquisite taste.

Under DOC rules this marzipan must contain a minimum of 45 per cent ground almonds. They can also come come covered in a layer of chocolate. These are also in the traditional cone-like shape.

When the shelves of El Corte Inglés supermarket next month fill up with turrón and other Christmas treats, you will also find boxes of mazapán de Soto on sale.