Come rain or shine the Majorcans totally love a fiesta. Even with summer temperatures on ‘ignite’, nothing seems to keep them away from a party, or any excuse to drink, sing, dance, drink, twist, twirl, meet up with friends, drink, shout, and be jolly. They are a loud, cheery lot and won’t be put off by any extremes of weather, heatwaves, hurricanes, thunderstorms or monsoon rains. They would probably even ‘rock’ through an earthquake!

Yet in the face of it all, there’s a lot more to a fiesta than just an excuse for a random jolly.
The Majorcans really look forward to any opportunity which celebrates their local customs and traditions. Fiestas are planned meticulously, generally organized by local volunteers, and valued as an extremely important part of their island culture. After all, these same fiestas have been celebrated by parents, grandparents and great grandparents, albeit with slightly less gusto, particularly through the dictatorship of Francisco Franco! But perhaps, that’s why the freedom to fiesta these days, is celebrated so loudly and passionately with the volume and frivolity ramped up to the max, firmly burying their repressed past.

When we first came to live in Majorca we rallied to every fiesta and celebration going. As you can imagine, it was a tiring task with the average summer season showcasing an impressive array of organised events. And since we would go to the opening of a clam shell we naturally felt quite exhausted!

These days we tend to be more selective, and only show up at the hand picked fiestas we prefer. Like everyone, we all have our favourites, with some chosen simply for convenience, while others for the sheer spectacle of the chosen event.

Living in the north of the island, Pollensa for us is obviously a firm favourite, and never fails to delight on either random visits or at fiesta celebrations and organised ‘happenings’. Visiting friends from UK always ask to go there, and Pollensa’s cultural commitment to the ‘arts’ remains second to none, with a great thirst for culture across a wide spectrum of celebrated and select exhibitions, concerts and exquisite events.

The current month of August launches the 58th FESTIVAL of POLLENÇA - a classical music festival celebrating a broad election of brilliant musicians, orchestras and singers, performing across eight nights at ‘al Claustre’, the impressive ‘cloisters’ at the Convent of Sant Domingo, a Baroque-style mid 16th/17th century cloister known for the beauty of its four arched corridors and central courtyard. A classy location for a stylish, symphonic celebration, with the iconis festival embracing the entire month of August – so be sure to find a spare day in your diary!

One of my favourite events during the annual Pollensa fiestas is undoubtedly ‘La Patrona’, recently held in the old mediaeval town, which to everyone in the know, celebrates the famous battle and victory between the Moors and the Christians. It’s all great fun, but taken very seriously with leading roles voted for across a committed committee, and regarded as an honour to be chosen. Mind you, everyone taking part, whether Christians or Moors alike, presented their Oscar worthy performances with outstanding gusto and verve, befitting any celebrated Majorcan fiesta.

The first time we witnessed this lively spectacle, Other Half was swept away through the cobbled streets on a wave of marauding pirates; whilst I was lifted by the enthusiastic crowd and carried across a large central square in a tight press of hysteria, where my feet didn’t touch the ground. The performance is undoubtedly dramatic. It is also frighteningly boisterous yet great fun, but not something you would enjoy if you are a tad ‘claustophobic’ and crowd shy! The final, historic battle always takes place around 7pm, therefore the entire day is fuelled by numerous ‘tipples’ along the way. Wooden swords and cutlasses are flailed. Sharpish looking spears are wielded. There are firearms and loud bangs. Is it dangerous? Hello! So far to my knowledge no one has ever died! Although I am certain there must have been a few ‘minor’ grazes over the years, yet no one seems to be monitoring any relevant health and safety issues.

I remember with passion, the second time I saw this spectacular re-enactment. We were staying at an Hotel located in Plaça de Sant Jordi. I was delighted to discover that our room, on a high floor, actually overlooked a charming square below - and that the drama of the Moors and Christians would unfold with the ceremonial firing of muskets and a faux canon sited just below our window. By leaning out of the casement and perching gingerly on the rustic sill, I had a perfect view, and could film everything, away from the heaving crowds, slashing swords and stomping sandals. This was my ‘observer’s’ bliss.

“I hope those muskets aren’t loaded,” I casually joked, suddenly realising that I was directly above the grinning gun bearers. “Don’t be daft,” reassured Other Half. Then the canon went off, the muskets went bang, and all the colourful bunting strung across my hotel window burst into a thousand fragments, inches from my head! I have never moved so fast in my life as I threw myself backwards into the room like Bruce Willis in the first Die Hard movie.

I watched the rest of the ensuing battle peering nervously through wooden shutters. We were assured that the muskets were only packed with harmless paper and cardboard, yet they took out the fiesta bunting with one blast! Being British, we are naturally aware of Health and Safety regulations, and appalled by the lack of them here in Majorca, so chose to err on the side of caution and kept our heads down. I don’t think they ever consider the dangerous consequences behind many of their boisterous, daring, yet utterly reckless acts of celebration, all displayed in the name of island tradition! 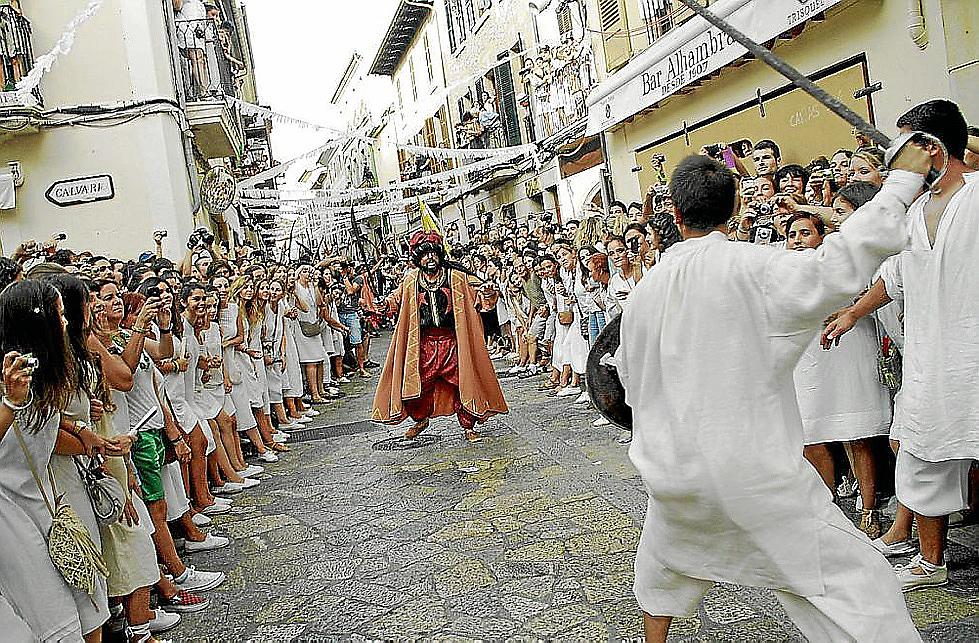 Think exploding fireworks in crowds, the naked flames in fire runs, alcohol fuelled mock battles, drunken youths climbing slippery pine poles the height of a church steeple with no safety nets, and children let loose in crowds with pitchforks!!! Thankfully, the island doesn’t promote the suicidal bull runs of the mainland here in Majorca! We have the cyclists instead!!!

I am not a kill-joy by any means, simple aghast at the blinkered vision and cavalier attitude towards personal and crowd safety at rambunctious fiestas and celebrations. The nearest I have ever been to observing Health and Safety here on the island was overhearing a pyromaniac about to illuminate an historic building in flaming sparkles telling his bespectacled assistant - “mind where you put the matches!”

Enjoy the party but check your personal accident insurance!