The do's and dont's of a Mallorcan Lockdown; I think!

You will have to believe me when I tell you that the last time I went anywhere very late at night and vaguely risqué was in the autumn of 1983. Since then, my ‘head-home’ time has hovered between 9pm and in certain extenuating circumstances - I have been known to dally somewhere unsuitable until almost 10pm.

I thought about this the other day when my cadre of fellow tennis tragic’s were discussing when, how - and by how much the current lockdown should be eased. This was because although we can blamelessly play tennis/paddle, when we have finished we cannot have coffee or a beer together, let alone go clubbing - ‘cos we can’t, can we? This led to a general view, that if the authorities wanted to - when it came to loosening the various Covid-19 protocols, the best way forward would be to slowly and incrementally allow people to meet and socialise together in a controlled and sensible fashion, long before it is felt necessary to open up all the social amenities at the same time.

This action allied to a mid evening curfew of sorts - many would agree to be a sensible first step on a path to some sort of normality. Doubtless, in the next few days regional government will be hopefully looking at ways to ease the lockdown burden on the public and help some in the hospitality business find some sort of light at the end of the tunnel. In my mind, it is the thought of future relaxations that keep many people on the straight-and-narrow of what is expected of us at the moment. Furthermore, isn’t it about time that government allowed children to indulge in outside team sports, because as far as I can see, the benefits of a healthy lifestyle is preferable to children sat in front of electronic devices indoors all day long.

The reality of the current situation is this. Because people are by their very nature social animals, as the lockdown proceeds, more and more of us are finding semi legitimate ways of meeting up with each other. That cafe that has a limited takeaway facility? All of a sudden has scores of people outside mingling at a distance(?) with each other - many of whom have arranged to meet up with friends in such a fashion - a meeting that is perhaps not quite in the spirit of current protocols, and - I am told are strictly verboten depending on what local police authority is doing the authorising or indeed not.

Come on, social media is alive with pics of groups of friends gathered around various bars and cafes (vaguely distanced!) enjoying their time together, seemingly oblivious to the fact that they aren’t supposed to be doing what they’re doing and in all truth they don’t appear to be too concerned about that fact either. However, as my spies have informed me - over the same weekend that a group of (mostly) women friends gathered along the promenade in Palmanova to their obvious joy and delight - a similar crowd of people were unceremoniously moved along by police officers, with food and drink confiscated just a few kilometres away - beachside in Paguera.

As a democrat with libertarian tendencies, I am uncomfortable with too much central control of anything - but, a pandemic is a pandemic and is not going to go away because we are bored with staying indoors. Nevertheless, the whole lockdown scenario only works within the context of at least a grudging general approval of the public. That is why it is both important and essential that sensible and appropriate measures are constantly under review so as to convince the public that they are not just stuck in some sort of lockdown led time-warp, where the easiest thing to do (not necessarily the best) is to carry on doing what we are doing, with no respite or end in sight.

It doesn’t take a genius of the human psyche to realise that this method of persuading the public to do the “right thing’ will only be successful for a limited amount of time - after that, ordinary people need to be taken into the confidence of those who are seeking to protect us. Perhaps this is not fair on those who seek to protect us - but, that’s the way these things work I’m afraid.

I see that there was another protest over the weekend in Palma where a convoy of cars hooted and tooted their disgust at Prime Minister Sanchez and Regional President Armengol whilst demanding their resignations. As reported in the MDB - “Bedecked with Spanish flags and with Spain’s anthem being played very loudly, the cars carried banners calling for the reopening of bars and restaurants.” All very well organised and properly stewarded I shouldn’t wonder; however one detail was missing. 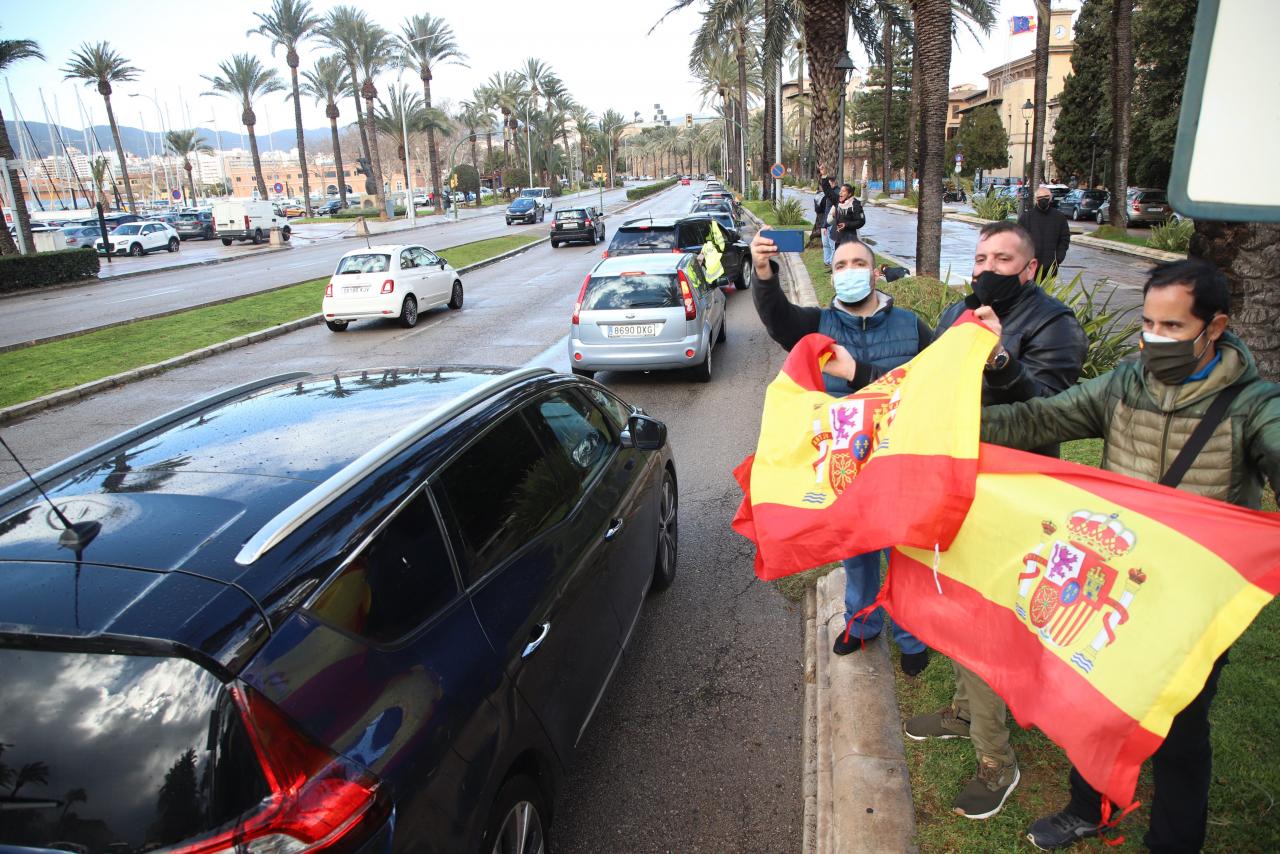 Nobody seemed to feel the need to inform the waiting press corps the answer to this question - “At what level of future Mallorcan Covid-19 deaths would they deem it necessary to close bars and restaurants once again if you ran regional or national government - and would you take responsibility for those deaths?” Do tell! You see, governing isn’t easy, is it?

And another couple of things...

Just as I was having a certain amount of sympathy with our regional government and the tough time they have been having - they go and spoil it all don’t they? No, nothing terrible or even shockingly controversial, just the fact that President Armengol has re-shuffled her regional cabinet finding places for three more of her buddies. Joy of joy - I see that one ‘minister’ is in charge of something called ‘Democratic Memory’ - I only wish that I could remember his name. Hey, it’s the way I tell ‘em!

When do you know when your national/local vaccination roll-out is struggling for traction? Ahh - this might be when one of your UK based grown-up kids are next in line for a jab, when - by my maths, I might (just might!) get a jab, circa 2025!

Burgundy Blue | about 1 year ago

"A pandemic is a pandemic and is not going to go away because we are bored with staying indoors." Always enjoy your column, Frank. But this is probably the most sensible thing you've ever written. :-)