Boozy Britons & What next in our post vaccinated world?

What next in our post vaccinated world? | YARA NARDI

At least five million pints were purportedly consumed this weekend in the UK as night-out starved Britons descended in their thousands on pubs and restaurants throughout the country. Nothing like a little hyperbole, eh?

I love how the popular press plucks a figure out of the air and gives it star billing on the front page. Who knows how much liqueur was consumed but with the current chilly weather in Britain, only the young, foolhardy or insanely brave would hang about outside into the small hours. Friends in Herefordshire, Somerset, Newcastle, Sussex and even Surrey have been emailing me icy snaps of their gardens covered in snow and it makes me shiver just to recall them.

On the first day that imprisoned Britons were actually allowed to go out to play, the weather was generally foul across the land and in London a friend told me that it had been freezing as she sat outside a café eating lunch, her first treat in ages.

Other girlfriends took to social media to parade new haircuts after months of emulating Shrek while some showed off freshly-painted talons. It makes you ponder what triggers happiness in us human beings. I would say most of my chums were more excited about getting their hair cut than anything else.

My great uncle, a tutor in an aristocratic household in Russia, who narrowly avoided being slaughtered during the Russian Revolution, returned to Britain after many months in imprisonment and on the run. On his return during the twenties, he apparently told my grandmother that the most lucrative job anyone could have was in the beauty and hair business as women would never be deprived of a good haircut. 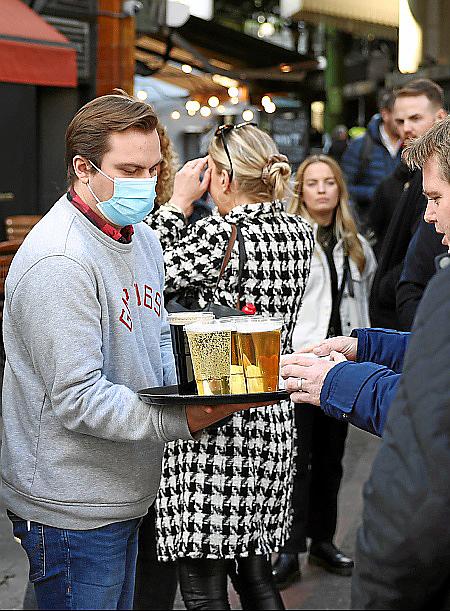 He felt that there was a new shift in consciousness and that women wanted more personal pampering on their own terms. The very idea of entering trade was scorned in my academic family and my poor great uncle, so weakened by the hardships in Russia, never got to open his fantasy ladies’ beauty business but he was right on the button about its potential. A man ahead of the times.

An entertaining aspect of this lockdown period is the endless goonery involving Zoom mishaps. Nothing, of course, can trump the brilliant Texas lawyer disaster when a man appeared as a cute cat at a po-faced meeting. All the same, it was fun to see Canadian liberal MP, William Amos, caught literally with his pants down.

Back from a jog, Amos threw off his clothes and stood naked, his private parts only shielded by a Canadian flag at his desk, while fellow MPs gawped on in disbelief. He’d inadvertently switched on his video. At least Amos is fit and lean. Every cloud, as they say.

It seems that half of the UK is now vaccinated and the death and infection rate at an all-time low and yet still curbs on personal freedoms continue. Why is that? I heard from friends back in Blighty that even if elderly people are vaccinated they still can’t meet up with relatives and friends. It doesn’t make any sense.

If I were in my dotage in the UK and had the choice of either seeing family and risking infection or being incarcerated in lonely isolation without a friend in the world, I’d go for the former. What’s the point of living into old age if you are marooned in some grim, loveless care home for more than a year with ghastly food and without comfort or human warmth.

Surely better to die early in the arms of loved ones than in some sterile home where no one gives diddly squat whether you make it or not. Of course, there are some caring souls in God’s waiting rooms but having spent many years dealing with care and residential homes and living through the nightmare with elderly relatives, I know only too well the harsh reality.

The truth is that Covid-19 or whatever new strain pops up next will never go away and even if it does, some other horror will come along to replace it. We cannot continue in such a lamentable state of economic uncertainty. The UK has certainly been hit hardest of most countries, aside from the US, and this is largely due to the pre-existing health of the nation and the fact that too little was done to curb infection in the early stages.

There’s been a lot of crowing from the government about its successful rolling out of the vaccine, unlike the rest of Europe, but its record isn’t too hot if one looks back to March 2020 when massive avoidable mistakes were made.

I will never forget arriving at Gatwick Airport to get one of the very last flights back to Palma and not seeing mention of the virus. Nor were there posters or announcements - nothing. This state of malaise continued and it was only when citizens were dropping like flies that any action was taken. Admittedly, governments the world over were in a state of blind panic but the UK certainly acted too slowly and with a degree of hubris. It has nothing to crow about now.

So, when the entire country is vaccinated, aside from those naughty people who insist on personal freedom to decide whether to be jabbed or not, what next for Britain? What new excuse will the government give for keeping the nation under house arrest? I’m sure it will come. Power and control through fear-mongering make for a lethally addictive and intoxicating cocktail.

The UK has 4 nations and only England were out drinking and eating outside on Monday. Scotland will have some freedoms from 26 April.