No one ever eats a raw quince

The skin is tough, covered in down and is frequently blemished. | dkammel

Most of us, at some time or other, have commented on the beauty of huge clusters of grapes, hillocks of shiny russet apples or oranges as big as traffic light orbs. I have never heard anyone say “Oh, I saw some beautiful quinces at the market today.”

I can’t think of any of the lyrical poets who was inspired to write about quinces as Wordsworth did about daffodils or Burns about a field mouse.

At first glance most of the quinces I see at the Mercat d’Olivar resemble an attempt to cross a pear with an apple — an experiment that went horribly wrong.

The skin is tough, covered in down and is frequently blemished. The flesh is hard, somewhat gritty and bursting with tannic acid, making it quite unpalatable: no one ever eats a raw quince.

It is knobbly and full of the wrong kinds of bulges. If it were a human body it would be beyond redemption — even in the hands of a Harley Street cosmetic surgeon. Yet behind this often grotesque exterior there lie hidden beauties that are well worth discovering, although to do so you have to cook the quince.

The quince’s greatest allure is its aroma: it is ever present, delicate and more than a little exotic. There was a time when the hard hearts of quinces were hung in wardrobes or tucked into lingerie drawers so that the soft natural scents permeated the clothes.

The natural colour of a quince is whitish, rather like that of an apple. When cooked with sugar it takes on a chiffony shade of pink, one of its inner beauties.

The quince, whose botanical name is Cydonia vulgaris, is native to western Asia and it later spread throughout the Mediterranean basin.

The Arabs brought it to Spain and the Normans took it to England where it was baked or roasted, turned into sweet pies or candied in honey.

Quinces were served as one of the desserts at Henry IV’s 1399 coronation feast. They were on the banquet menu as ‘quyneys in comfyte’.

English cooks in stately homes boiled, strained and set quinces to soft jellies for serving with roast meats. They were also made them into the first marmalades, a word that comes from marmelo, Portuguese for quince.

But jelly and marmalade made from quinces declined in popularity during the early 19th century as locally grown strawberries and other soft fruit became more widely available and imported citrus fruits came down in price. That was when marmalade started to be made almost exclusively from oranges.

The quince, called membrillo in Spanish, is not the most popular fruit at Palma’s Mercat d’Olivar where you will find them from the start of autumn and throughout the winter.
But you have to search for them because only a few stalls have them, they never have large supplies and they are kept tucked away at the back. 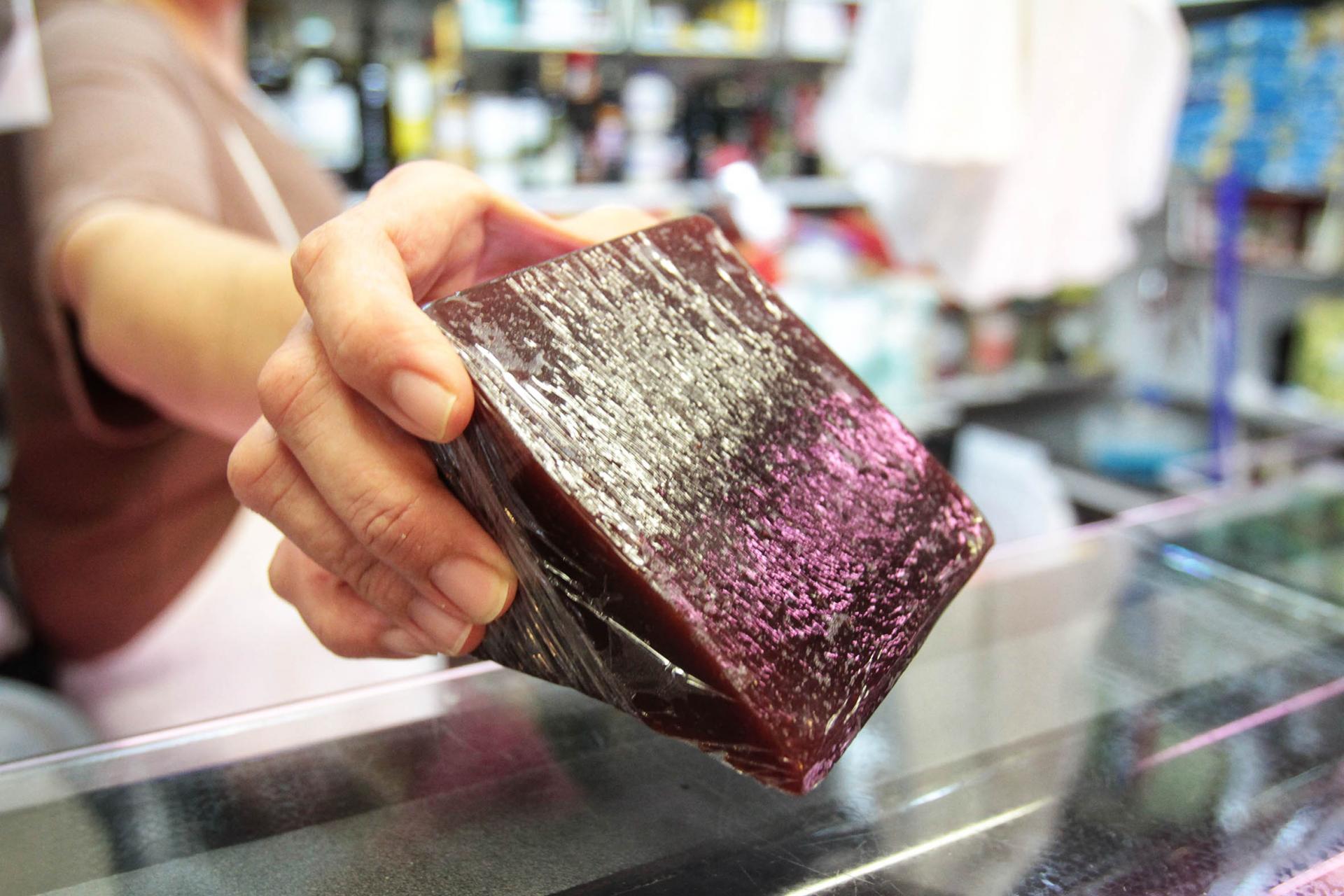 The stalls don’t need huge stocks of quince because young Spanish housewives, who don’t do a great deal of cooking, have little interest in them.

There are still a few of the old school, however, who carry on the culinary traditions of their mothers and grandmothers and it is thanks to them that quinces are still on sale at local markets.

Serious Spanish cooks turn quinces into compotes, jams and jellies. Some do them in the oven, rather like baked apples, to eat as dessert or to serve with a joint of roast pork.

You can make a compote by cooking the peeled, cored and sliced quinces in a mixture of sugar and water flavoured with cinnamon. For a kilo of prepared quince slices, use 600 grs of sugar, a litre of water and a small stick of cinnamon.

Bring to the boil and simmer over a low heat until the quince slices are soft, transfer to a serving dish or individual plates and sprinkle with seedless raisins previously soaked in white wine or a spirit such as grappa or vodka. Cinnamon addicts can dust the surface with a little of the ground spice.

Cored quinces for baking can be stuffed with roughly chopped walnuts and drizzled with honey to make a dessert with a nice contrast of textures and flavours.

For this dish buy large quinces, peel and core them and rub generously with lemon juice. This will keep them from discolouring when the high tannic content comes into contact with the air. 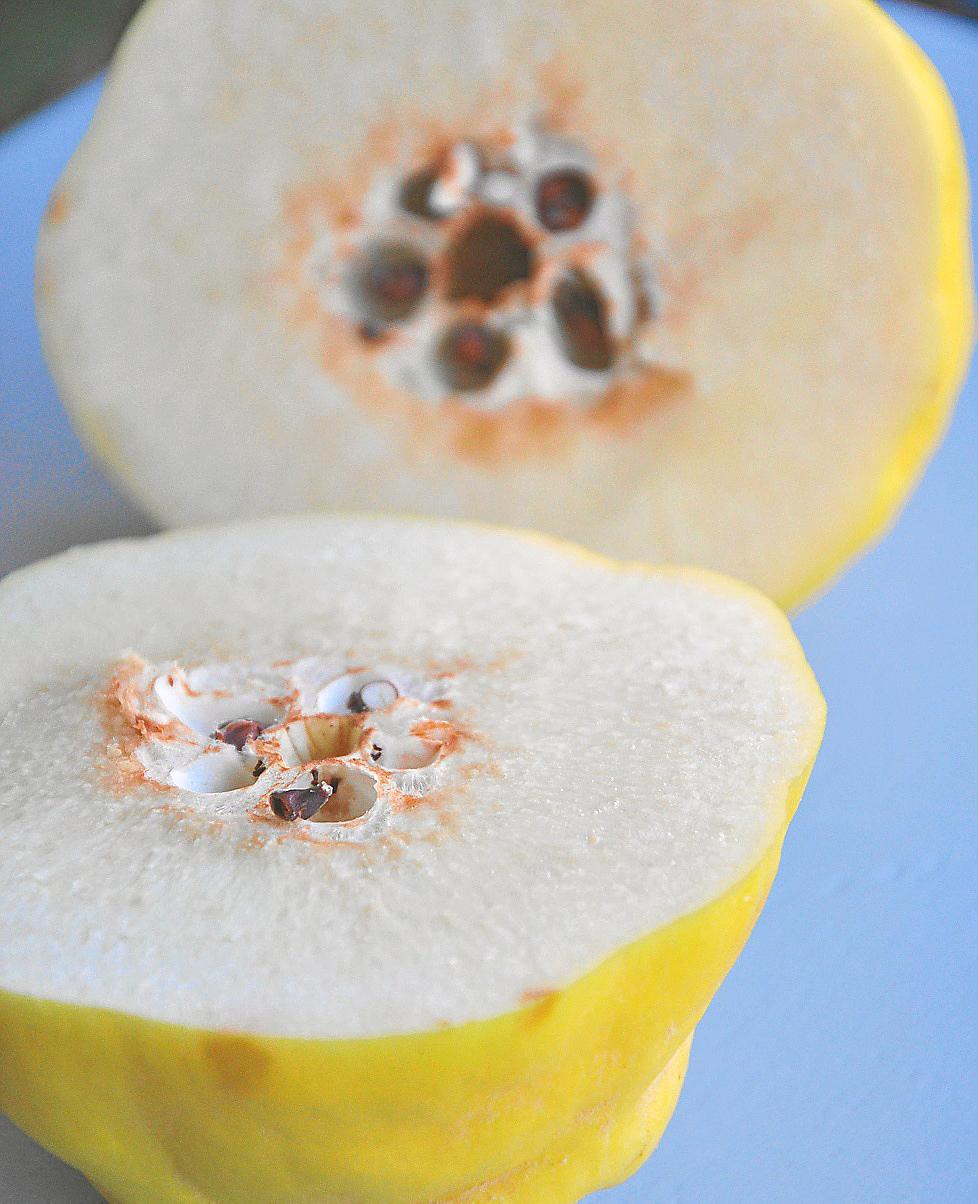 Put them into an overproof dish and push the roughly chopped walnuts into the core hole. Drizzle them with brandy and honey, letting the honey cascade over the top of the quinces and down the sides. Add a little water and some short pieces of cinnamon stick.

Bake in a medium hot oven until the quinces are very tender and of a light brown colour, basting them from time to time with the juices.

A rather swanky but simple dessert can be made by slicing three peeled and cored quinces into eighths. Put these wedges into a saucepan and sprinkled them with the juice of a large lemon and four tablespoons of sugar.

Barely cover with water and simmer for 25 minutes.
Meanwhile, mix 100 grs melted butter with six tablespoons of cream and four of sugar and stir until you have a smooth creamy mixture.

Rub an oven dish with butter and arrange the quince wedges in an attractive pattern. Stir the cooking juices into the creamy mixture and spoon it over the slices of quince. Brown under the grill for about seven minutes and serve immediately. 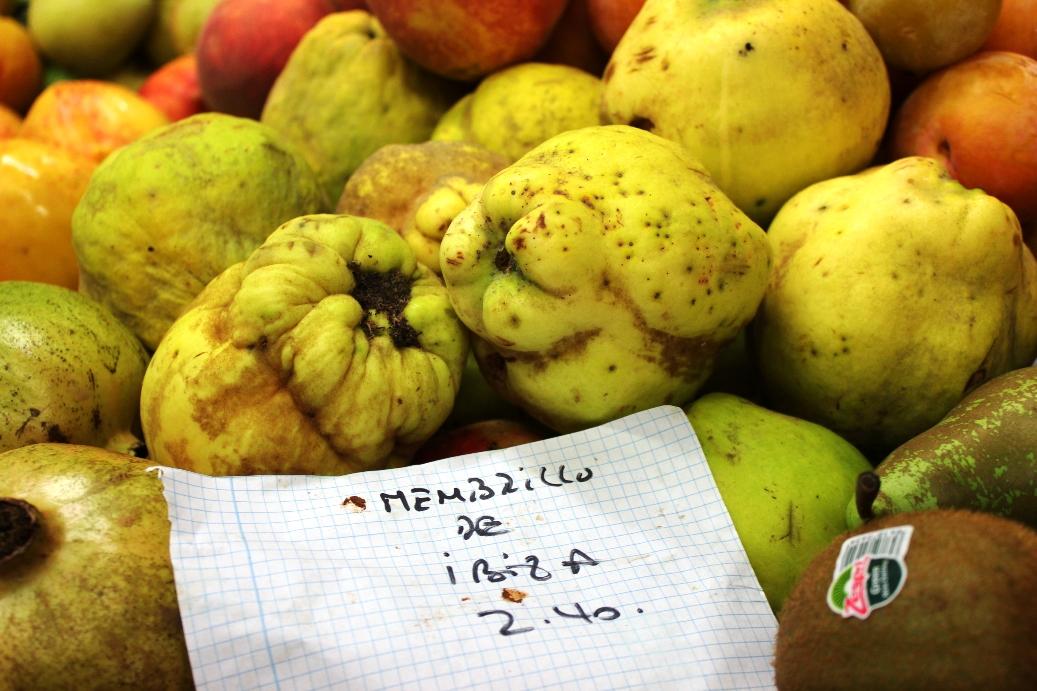 Spanish quinces are used mainly to make a dessert called membrillo, the same name as the fruit itself. The proper name for this dessert is dulce de membrillo, but everyone refers to it simply as membrillo.

You will find commercial membrillo at most supermarkets, usually in thickish solid slabs of a pink or orange colour, although some makers do it in a variety of marker-pen shades, which look most artificial.

It can be bought by weight in individual slices and it also comes in packets and cans. Sometimes it has a soft texture, like a very thick jam, making it ideal for spreading on bread or biscuits.

A popular way of eating membrillo is to cut a slab into smallish squares, dust them with icing sugar and serve them on their own with coffee or liqueurs.

Some Spaniards have it on its own with a slice of bread as a mid-morning or afternoon snack. It is often served with cheese at the end of a meal, but the cheese must be a mild one that complements the delicate flavour of the membrillo.

A slice of membrillo is loved by young and old, poor and rich, and is just as likely to be served at the end of a banquet as spread on a slice of bread for a hungry schoolboy.