The Arran protest at the quayside in Palma, Majorca. | Youtube: CatalibanesBlog

The Attorney General has asked the courts to sentence Arran activists to a total of 26 years in prison for public disorder on Palma Quayside in the summer of 2017.

The defendants are being represented by Alerta Solidaria, which is know for providing legal services for cases related to the Comités de Defensa de la República, or CDR as well as Independence protestors in Catalonia. 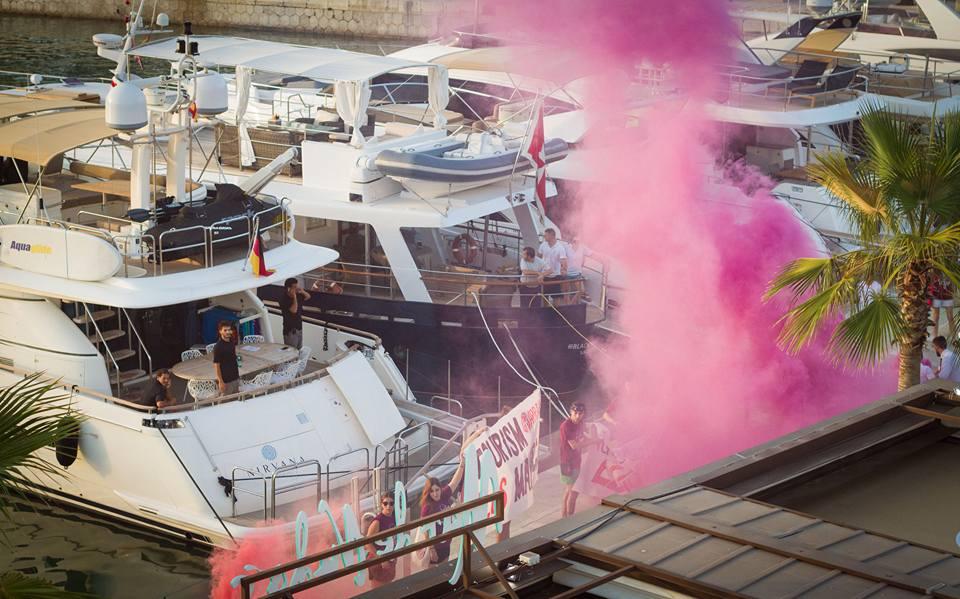 “We denounce that many of the accused were not even at the scene or involved in the events that were carried out that day, which was a protest of “symbolic action framed in the campaign against tourists,” said Alerta Solidaria.

The lawyers also accused Police of “using illegal files of organised youth to randomly target people who have ever attended protests or demonstrations or participated in political rallies for social transformation.” 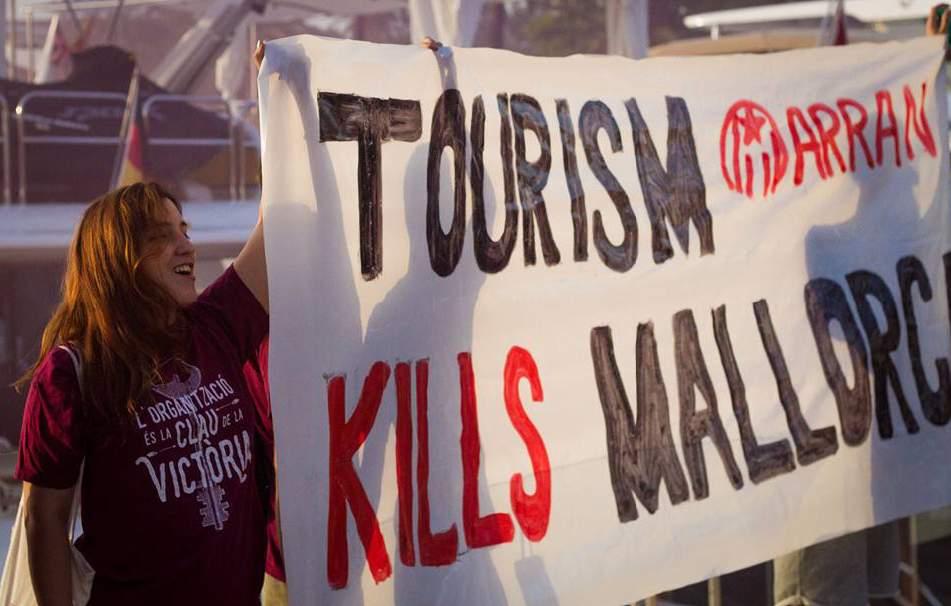 Arran uploaded a video from August 1, 2017 to social networks such as Facebook and Twitter showing activists waving banners with slogans like “tourism kills Majorca”, throwing confetti at diners in a restaurant in Moll Vell and activating pink flares on the quayside. 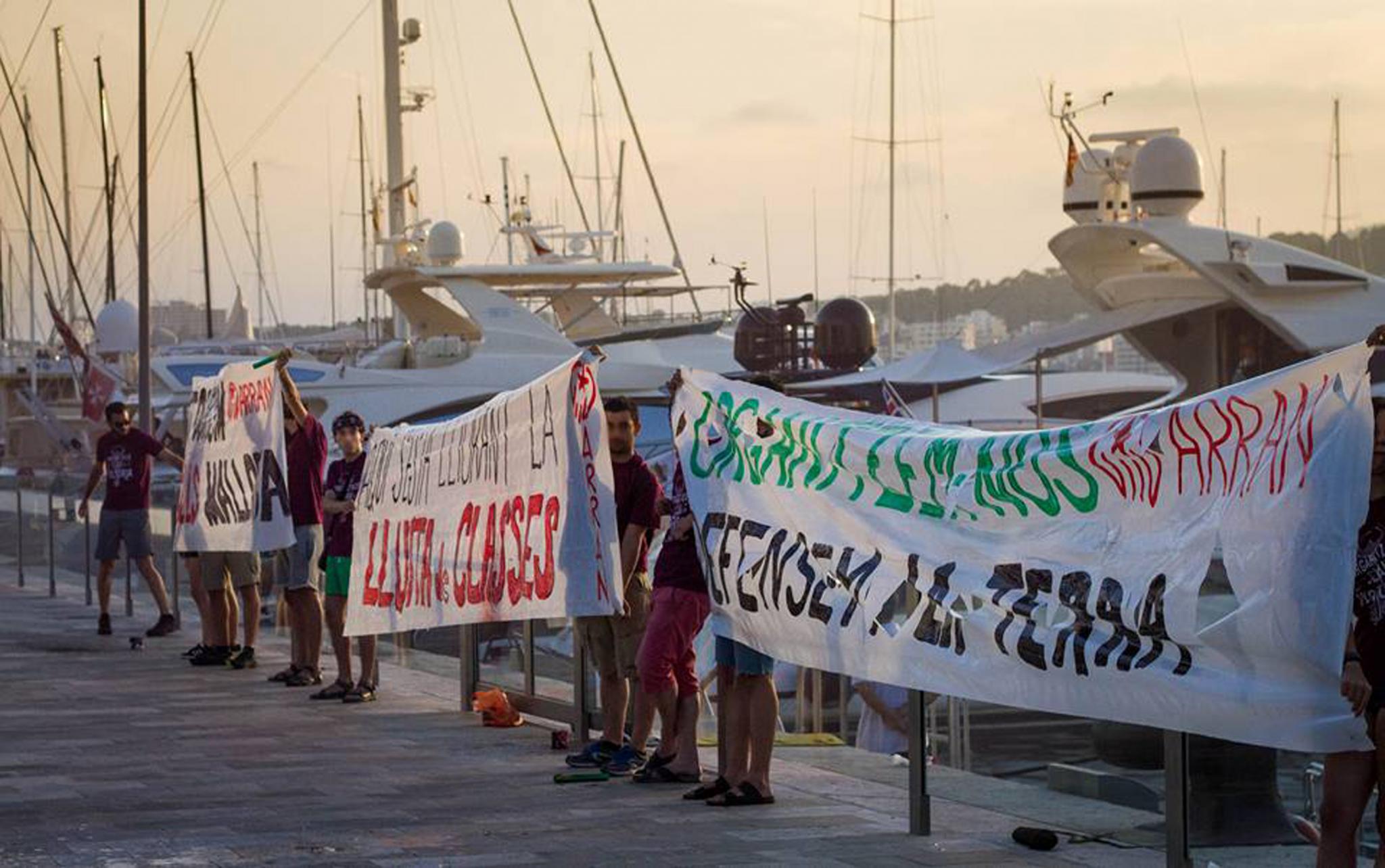 Arran says its aim is to stop the mass tourism that destroys Majorca and condemns the working class of the Catalan Countries to poverty!

You are quite right Bert about the quote. Churchill actually said, “Meeting jaw to jaw is better than war.” it was Harold Macmillan who misquoted Churchill a few years later and that phrase is now incorrectly attributed to him.

Yogi, the quote you mention is not, and never has been, Churchill’s. He was never an appeaser. If it had been up to him, Hitler would have been stopped in his tracks the day he invaded Checoslovaquia. We all know what occurred after that. In regards to Mr Little’s comment, the same can be said about the U.K., but with foreign names from regions farther east. Merry Christmas.

Bert. "Jaw jaw is better than war war." ( Churchill) I could be wrong but I don't think he was a weeping liberal.

I have never seen Hitler being described as a “ miscreant” before, nor as far as I can remember have I ever been described as a bleeding heart liberal. Lock em up and throw away the key. Problem solved. No Mr.Taylor, problem not solved. Lock them up and behind them will come more. Make martyrs out of them and you will create heroes. May I remind you these are young Mallorcans living on their island, protesting about the excesses of tourism as they see it. And agree or disagree we all know this is a rising topic in todays society that will not go away. Tourism cannot and should not be the be all and end all of the island economy. Digital businesses are being created all the time on the Parc Bit, a friend of mine started one which has become extremely successful. Agriculture was decimated in the 60`s as all the labour moved to the coast to enjoy the riches of tourism, and who can blame them. However the island now imports thousands of tons of food every year to feed us and the tourists. Luckily there is a move back towards the land, especially in organics, and it must continue. The island must strive to become more and more efficient in feeding itself. There will always be tourism on Mallorca, and there will always be foreigners like you and me to help service that tourism. But never forget whose island this is, otherwise should the worm turn full circle it may be you Mr Taylor being banged up and Juan or Pep or Bernat throwing away that key.

By the way Mr Little, they tried the same with the London Bridge terrorist, after a liberal judge released him from jail half way through his sentence.

I am sick of reading comments by weeping liberals who think “talking” to miscreants is going to solve the problem. Never has ( Chamberlain) and never will. Lock em up and throw away the key. Problem solved.

Steve Riches | over 3 years ago

John Little - peaceful protest with no violence or damage ro public or other people's property is fine by me. Criminal damage or any other lawbreaking is not. Directly or indirectly, tourism is providing around 70% of this island's income. The protesters need to come up with viable alternatives - it would be a much more productive use of their time. If I spend 15 Euros in a bar, the bar owner then pays his costs and taxes then spends, let's say, 5 Euros elsewhere - that 5 Euros continues to circulate and makes further wealth as it does so. Tens of thousands of tourists boost that money circulation and thus the wealth of the protesters - so PLEASE let's see their workable alternatives. They are right that tourism adds environmental pressure on a relatively small island: the Tourist Tax should be used to right environmental wrongs. It isn't, it's being used as a cash cow by lazy politicians.

"The Attorney General has asked the courts to sentence Arran activists to a total of 26 years in prison for public disorder." The accompanying article gives no clue as to the number of protestors and so as a stand alone statement is rather absurd If we assume there were ten then the AG is asking for two and a half years apiece. I suggest gaoling these young people does our society no good whatsoever. These are students, activists who are demonstrating for a cause they believe in. They are not the sort of mindless thugs who piggyback large demonstrations to cause violence and mayhem. Give them community service and more importantly arrange meetings between them and the tourism authorities so they can share each others position and look for common ground. These kids are going to be part of the next leadership generation, try and use them for society’s benefit rather condemning them to prison.