It’s where the city’s well-heeled and affluent like to shop and is usually one of the busiest neighbourhoods in the city, but because of the State of Emergency, only two stores are open, La Pajarita delicatessen and chocolate shop and Forn del Sant Crist. 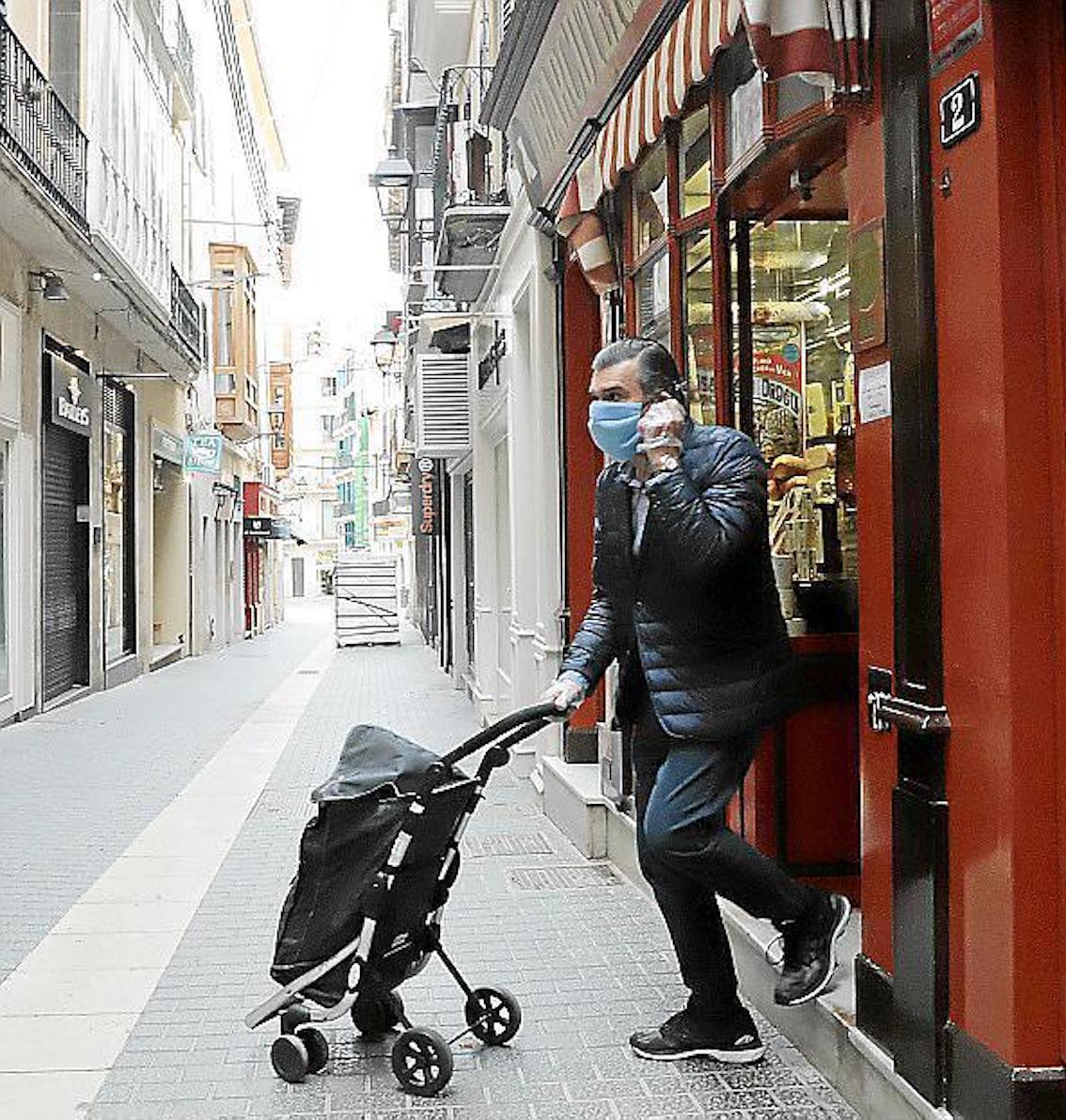 La Pajarita opened in 1872 and Javier Mulet who’s the co-owner, passes by the store from time to time during the coronavirus lockdown but prefers to stay in his house in Sencelles.

His son José was in the shop on Tuesday and spent most of his time doing end of month paperwork.

A few meters away, a truck has just unloaded several pallets in front of Scarpe d'Italia, a shoe store that specialises in imported footwear which was opened by Eustaquio eleven years ago.

"I have orders that were made in September and yesterday I was notified of this delivery,” he says, adding “its next summer's fashion."

90% of Estaquio’s clientele are tourists and he admits that because there won’t be any this year he fears for the future, saying "here we go crazy with prices". It's a popular spot that costs 3,000 euros to rent and he has renewed his lease twice.

"You may have noticed that a lot of businesses are changing here; I've seen eight changes in the last few months, "he says.

There are no letters for him today and it’s a different postman for the second day in a row.

"My usual area is Sant Francesc but we only have half the workforce so there is no regular postman,” says Bernat.

They are cleaning and disinfecting Costa d’en Brossa and were it not for the coronavirus restrictions it would be possible to check for replica gas masks from the Second World War in a store dedicated to collectors of Army paraphernalia, from weapons to uniforms to books, but on Tuesday the shop is closed.

Stick no bills is also closed. It specialises in postcards and travel posters and has a retro getaway poster in the window which is a reproduction of a gin advertisement that says “Relax in the city”.

Chopin's bust, which sits in the small square dedicated to the Polish composer was erected to celebrate the 180th anniversary of his arrival in Majorca.

Xisco crosses paths with Chopin as he delivers an Eroski order. He buzzes the intercom and the customers open the door for him, but his job is more complicated during the coronavirus lockdown

"We go upstairs and leave the order at the door but we don't go into the houses," he says. 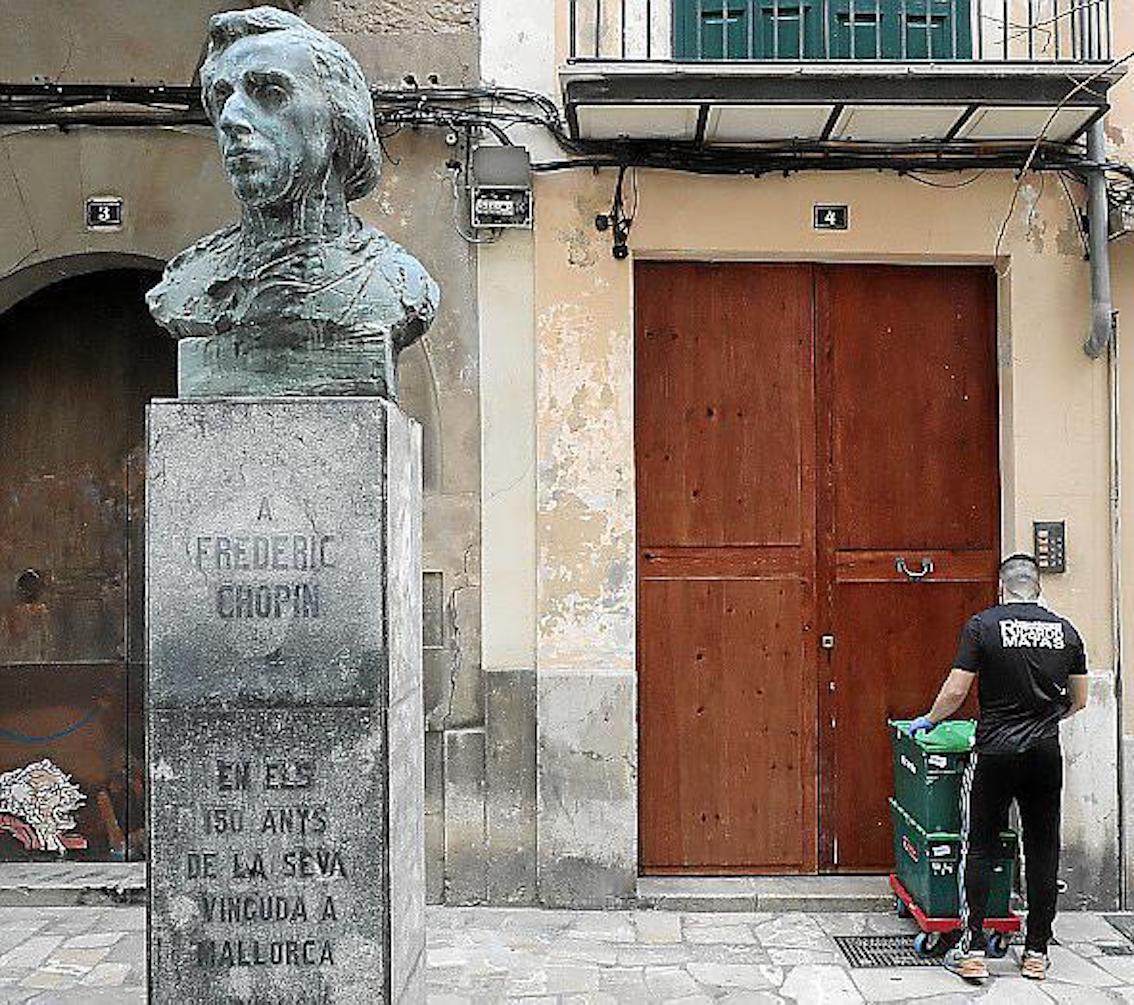 Dear MDB team, in my role as founder / director of Stick No Bills Posters in both Asia and Europe I just wanted to remark on your observation that our Palma (iberia region flagship) gallery is closed as follows: yes the actual physical gallery space on Costa d'en Brossa is closed as per the law. However, we are still very much taking and fulfilling orders via email and our website with the amount we donate to Medicos Sin Fronteras to help them in the fight to overcome the virus [https://www.msf.es/actualidad/espana/coronavirus-covid-19-espana-montamos-dos-unidades-hospitalizacion-temporales] from proceeds on all sales of our framed limited edition travel poster collection increased to 30% for the duration of the State Of Alarm. Thank you for letting me post this clarification. Wishing all the team at MDB well. Best, Meg

Placa Mercat is a shell of its former self. No Gibson, no Nana, no Nicolas. Even Alaska is closed. Hopefully, once this is over, the terraces will be allowed back, and the square can hum again as it did a year ago.

I always smile at references to Chopin and Mallorca. Treated like dirt when he was here, he has now become almost a local saint!