The baked ham was quite sensational and was worth a 10. | Andrew Valente

My first experience of a carvery was in the early 1990s when one opened in Cala Fornells (out Santa Ponsa way) - and I fell in love with the carvery way of cooking and presenting food. This carvery was run by a young Englishman who had learned how to cook in the Army — and he knew a thing or two about roasting meats.

The carvery is very much an English invention. The first one appeared around 1956 in two of London’s famous Lyons Corner Houses — one in The Strand and the other in Tottenham Court Road.

But these first carveries weren’t done in today’s free buffet style. The carvery served a three course meal with a drink, costing five shillings at the time, and each diner was allowed to carve the meats — although a professional carver was on hand for those who didn’t know how to handle a carving knife.

All side dishes were served by Lyons waitresses who had a special name — nippy, because they were fast workers. The Lyons company registered the name and had exclusive use of it.

About 20 years later several other carvery restaurants had opened in London, including one at the Regent Palace Hotel. Pub chains such as Harvester and Beefeater later got in on the act.

Although the carvery out Cala Fornells way was excellent value for money and seemed to be doing well (I gave it a raving review in the Bulletin) it disappeared rather quickly.

I also gave it a good write-up in sister paper Ultima Hora and Mallorcans were going out to try it because the free buffet was new on the island at that time. And it was most welcome.

A few days after the review appeared in Ultima Hora I received a phone call from a Mallorcan woman. She started off by saying: “I’m a fan of your Ultima Hora column, but don’t get excited, I’m very old now.”

It turned out she had read the review and gone to the carvery with her son and his young family for Sunday lunch. The children had loved it because they could choose what they liked and not what someone put on a plate for them.

She asked if I knew of any other serve-yourself restaurants. I didn’t, but I gave her some names of places I thought she and her grandchildren would like.

They would certainly have been delighted with the Sunday carvery at Delfinos which starts at 1pm and goes on until 6pm — because the roast meats are excellent and the choice of trimmings is immense. 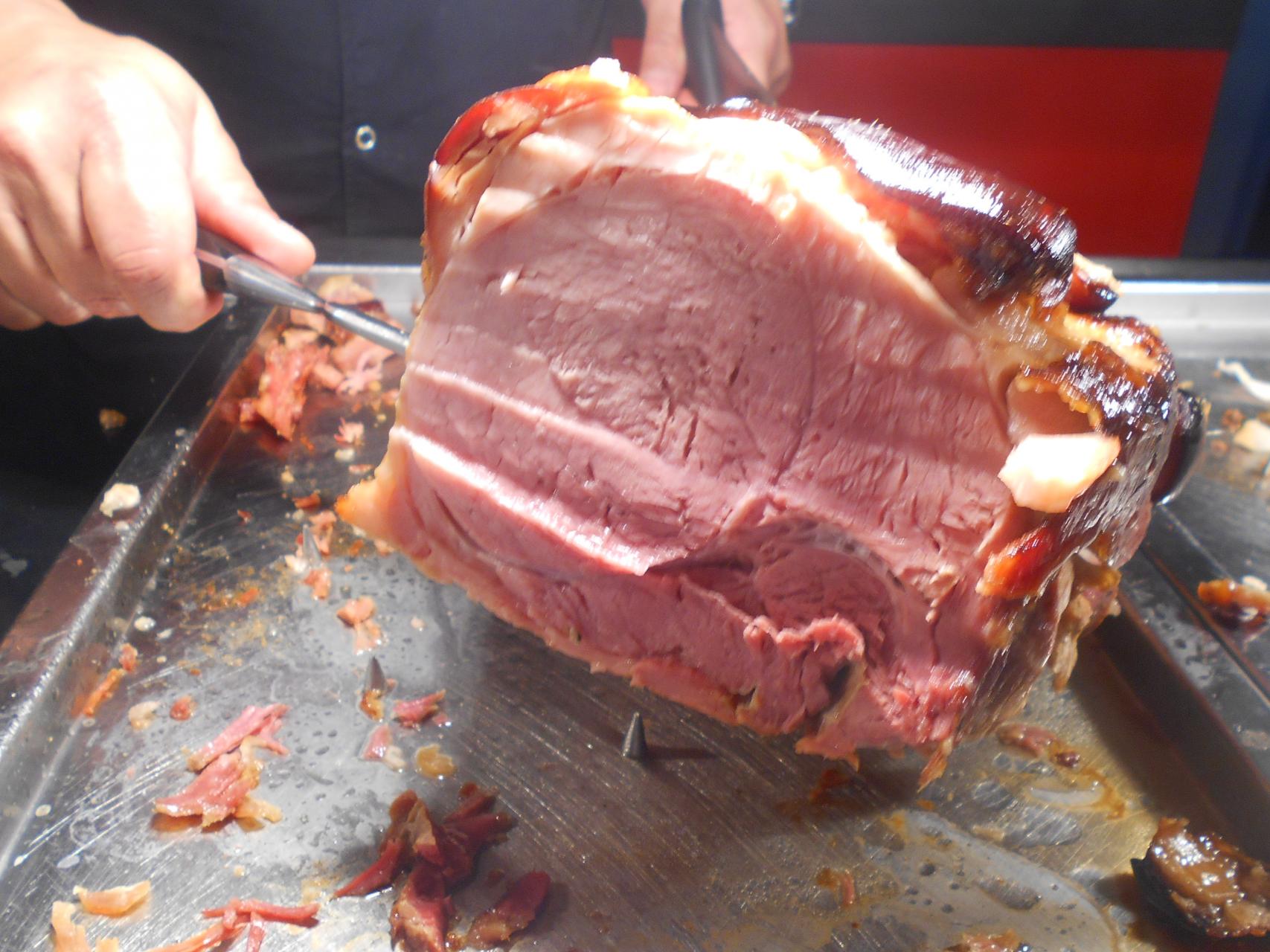 The buffet is on a long table with the meats and the carver at the right hand end near the kitchen, from where chunks of roast meats keep appearing.

Although I usually go for lots of roast beef and as many of the trimmings as I can manage, this time I tried the baked ham - and it was absolutely stunningly splendid.

No baked ham I have ever had (and I’ve tasted a glazed one from Virginia) was anything like as memorable as the one I ate at Delfinos two weeks ago. 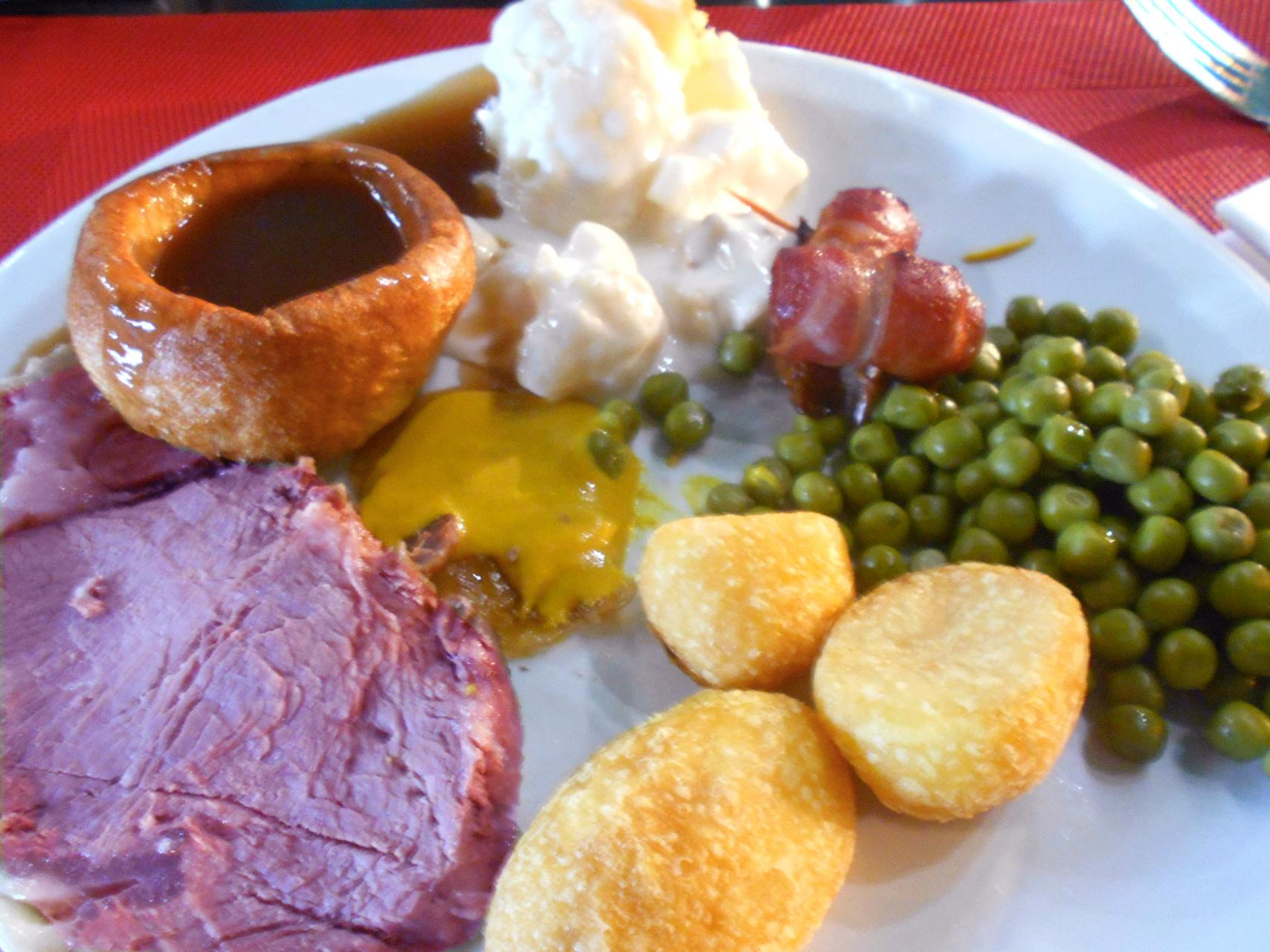 It wasn’t just butter-tender, it had a superb texture that I have never come across in any meat. I tried it with a little English mustard, a red berries sauce and also apple sauce — and each one revealed taste sensations I have never found in other baked hams. It was awarded an immediate 10 plus.

Roast beef was so tender and tasty

The making of a lovely piece of roast beef isn’t all that difficult. All you need is a quality cut that has been aged for a couple of weeks at the correct humidity and temperature — and a bit of self confidence.

The latter means that you have to believe that beef must not be overcooked — and you can do this if you roast the meat at a very high temperature for a very short time. And then leave it to rest for 15 minutes. 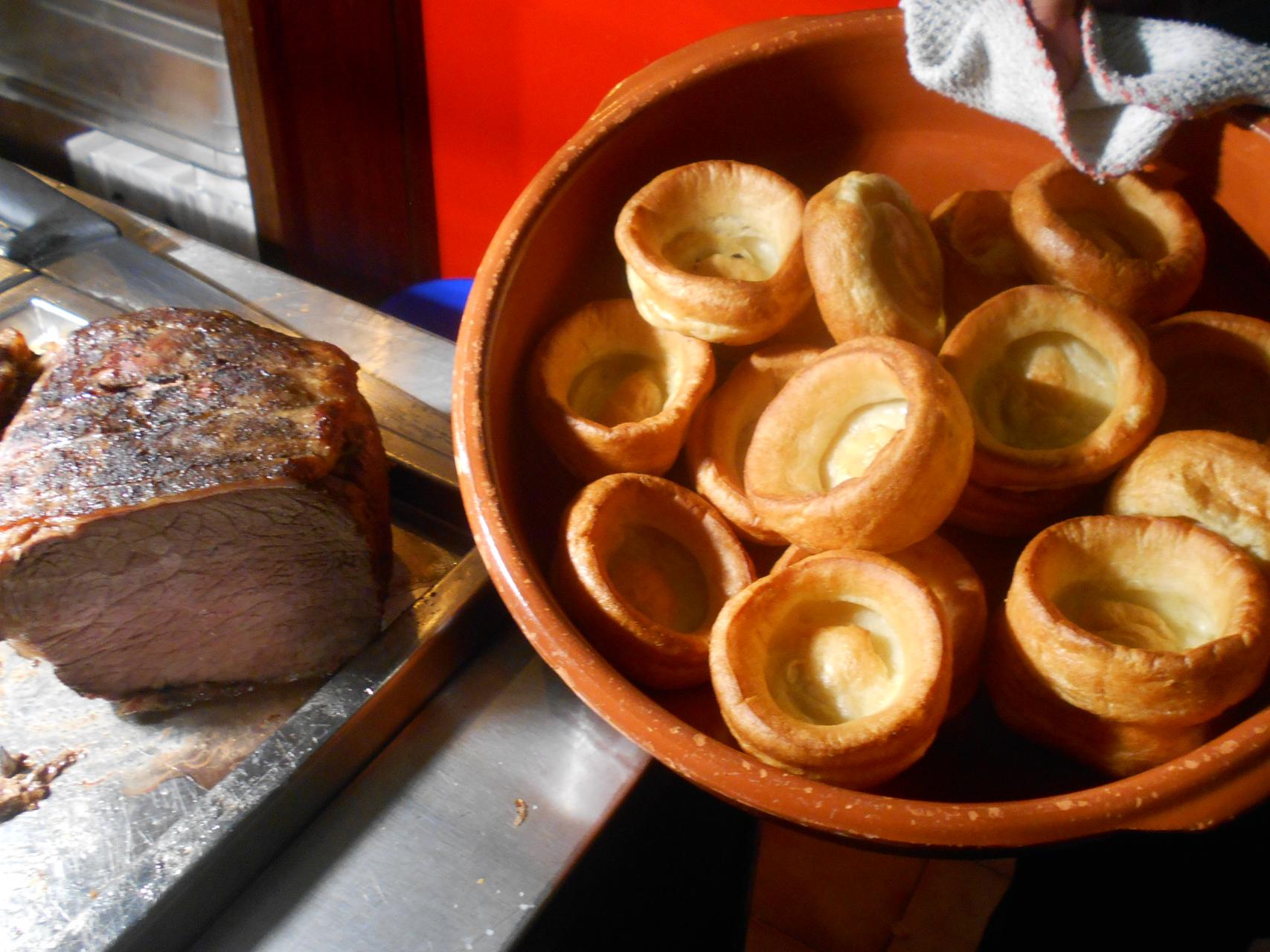 The main difficulty is getting the unconverted to follow the high temperature and short roasting time. They always want to leave the meat in the oven for a little longer — and that overcooks it.

I was sitting just opposite the carver. I had asked for a table near the window but I didn’t get it and was as far away from the light as they could put me — which didn’t completely spoil the pictures.

That less-than-perfect table for photography had the advantage of giving us a good view of the roasted meats as they came from the kitchen to the carver’s board. I was able to see that all the roast beef cuts had nice tinges of pink when cut — which showed the kitchen staff are good at achieving correct cooking times.

There was one roundish piece of beef, however, that was more than a little grey and didn’t look at all juicy and tasty. But I didn’t ask to try that one. I loved the English style mustard that sent tingles down my nostrils.

I was absolutely delighted when the waitress said they had homemade rhubarb crumble, but was more than a little disappointed when I tasted it. 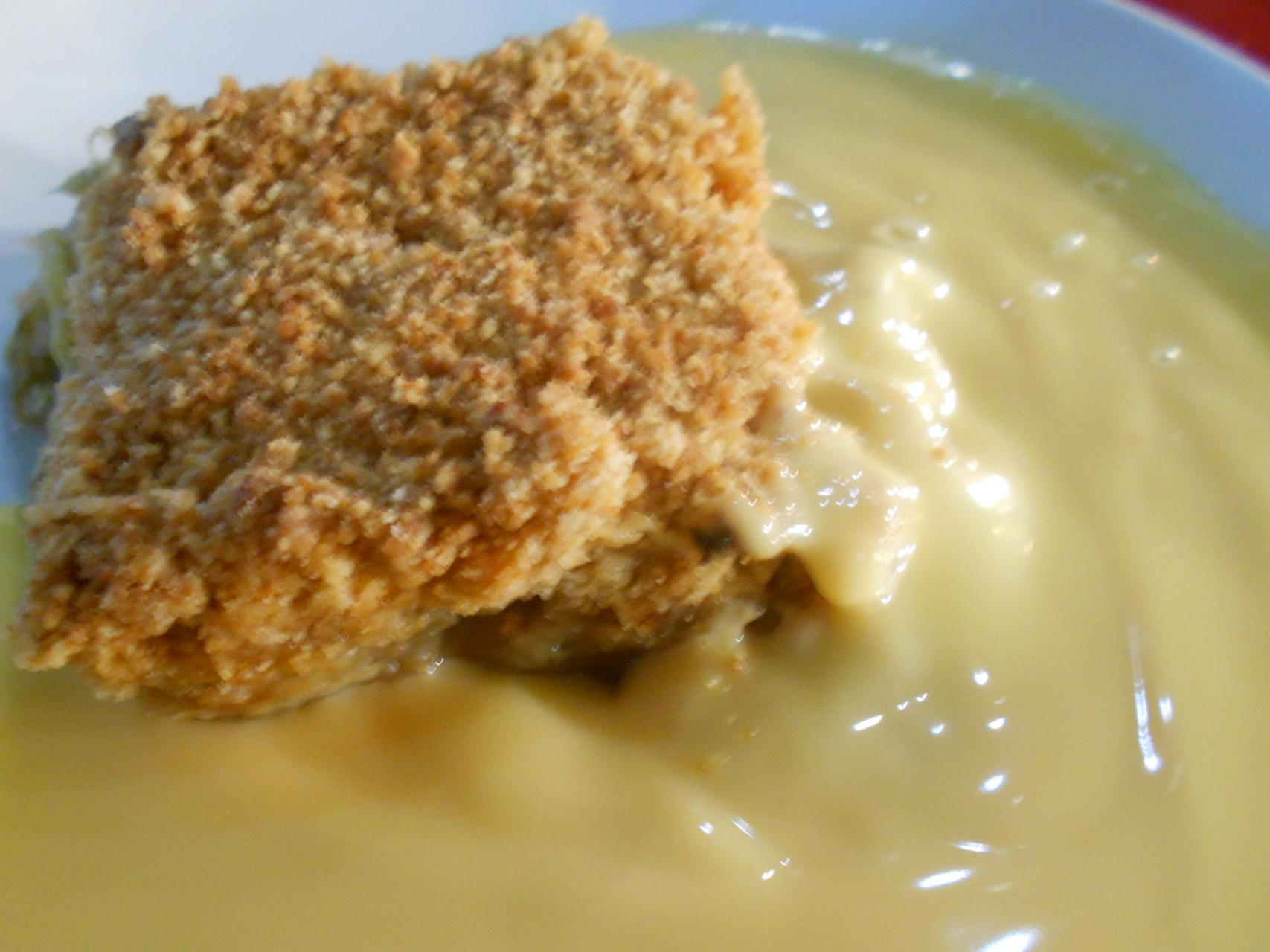 There were serious faults on three fronts. The first thing I noticed was that the crumble topping was far too hard and brittle. Next, the topping had that dry taste of uncooked flour.

And finally, the rhubarb lacked succulence. It was as if the frozen rhubarb had been defrosted and was used as it came…thus the lack of succulence. But it was still a magnificent carvery meal.

Over the years I’ve had three superb carvery lunches at Delfinos. They have always been extremely enjoyable and tremendous value for the amazing low price, which is now €12.90 per person — some of whom have gargantuan appetites.

The meats being served throughout the day are high quality cuts and there can’t be a great deal of profit involved. The piece of beef we had, very nicely underdone in the centre, seemed to be a piece of the rump. The cooking time was nicely judged and its lovely pale pink colour meant it was tender and juicy and also full of flavour.

On previous occasions I’ve had seconds of roast beef (and sometimes thirds) and that brought my carvery meal to an end. But because I now need five pictures for the review, I tried the baked ham — and that was a revelation. I simply hadn’t realised that baked ham could be as memorable as this.

It wasn’t that it was nicely tender — this was a completely new texture for me. I’ve never come across anything like it. I’ll be returning for more baked ham before 2022 comes to an end.

Delfinos, Crta Palma-Andratx at the Marineland roundabout. Tel:971-676449. Residents (and visitors) come from all over the island for the carvery every Sunday from 1pm-6pm and the place fills up. Play safe and book a table.