Lovely menu with many memories and surprises

The rolled up hake in orange sauce that was worth a 10. | Andrew Valente

Last week I walked into the Elías Urban Kitchen restaurant and it was as if I were suddenly in a time machine — I was whizzed back 18 years and was standing in front of the Restaurante Bruselas and there was the Argentinian cook of Italian descent, Fabián Luzzini, posing for a picture at the entrance.

He was surrounded by text from the reviews I did in the Bulletin and sister paper Ultima Hora in 2004. These cuttings were in a golden frame hanging on the wall near the door.

It was a nostalgic moment and also a happy one because when I pass the long-closed Bruselas restaurant, formerly a jazz music bar, in my mind I see images of the musicians and cooks who worked there, and I wonder what’s happened to them.

In the case of Fabián, who was the Bruselas head cook in its final years, I discovered last week he has had some interesting jobs since the Bruselas days before landing three years ago in his own restaurant in central Palma.

He’s in the kitchen with an assistant, and his wife Marilina runs the dining room. They have two daughters, Sofía and Sol, who sometimes give a hand in the restaurant. Sol does the menu changes on @eliasrestaurante. Eighteen years can bring a lot of changes into one’s life.

On the other hand, nothing has changed. Fabián continues to be a first class cook and a dab hand at doing meats on the plancha. And he does €15.50 menús del día that are well thought out and balanced. 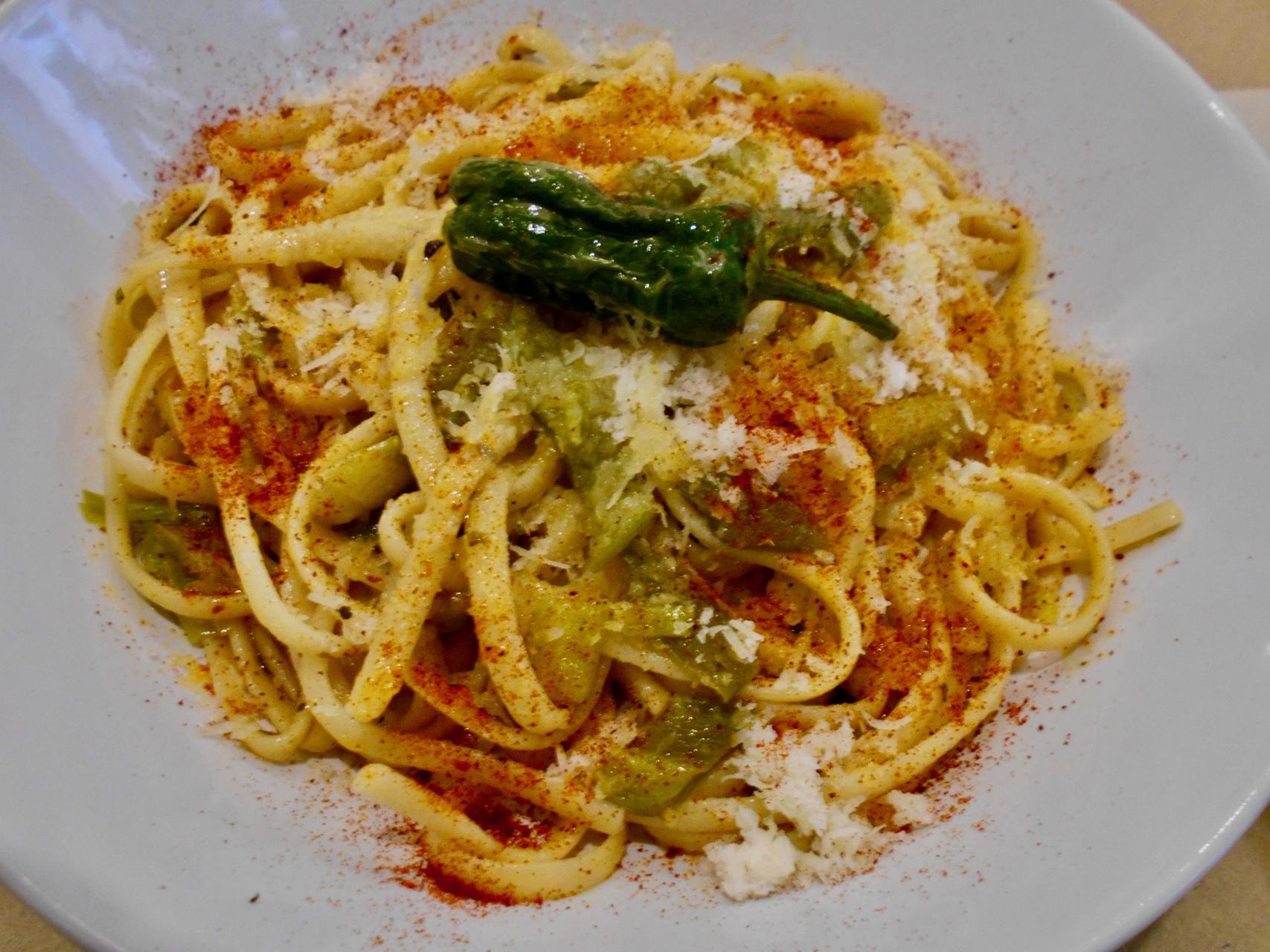 I pass the restaurant on one of my routes home from the centre of Palma and I’ve been looking at the menus for years, and thinking that I really must go in and try one.
Well, last week I finally opened the door and crossed the threshold and discovered those framed reviews of 18 years ago.

And I did it because of a dish on the menu that caught my eye: spaghetti al ajillo. This is the Spanish way of writing spaghetti aglio e olio: spaghetti with garlic and oil.
This is a famous dish associated with Italy’s cucina povere (poverty cooking) that has become popular in recent years all over the world.

In the famine years of the 19th century, which led to mass emigration from Italy to the United States, South America and many European countries, the cucina povere took in mainly pasta and polenta dishes.

And people were so poor and there was so little to eat that some of the pastas of that time were nothing but spaghetti, oil and garlic — even on Sundays.

But most restaurants with spaghetti aglio e olio on the menu nowadays add little touches to make them less austere. Fabián puts in a little sautéed green peppers and he also dusts the spaghetti on the plate with paprika and tops it with a small green pepper. That way it’s a perfect pasta dish for a starter.

For pasta addicts like myself, Italy’s 19th century cucina povere has become one of the marvels of the 21st century.

One of the surprises of this meal was the mains: a rolled up fillet of merluza (hake) done with an orange-based sauce, served atop some small nuggets of fried potato and garnished with fresh fennel leaves.

I never expect a dish of such culinary refinement in a €15.50 menú del día and I’m always surprised (and highly delighted) when one comes to the table.

The hake was beautifully cooked, flaking nicely when prodded with the fork. The sauce had fresh orange flavours and refreshing citric notes. The fennel leaves contributed a subtle herby taste and the potatoes were nicely fried. It all added up to a 10 rating. 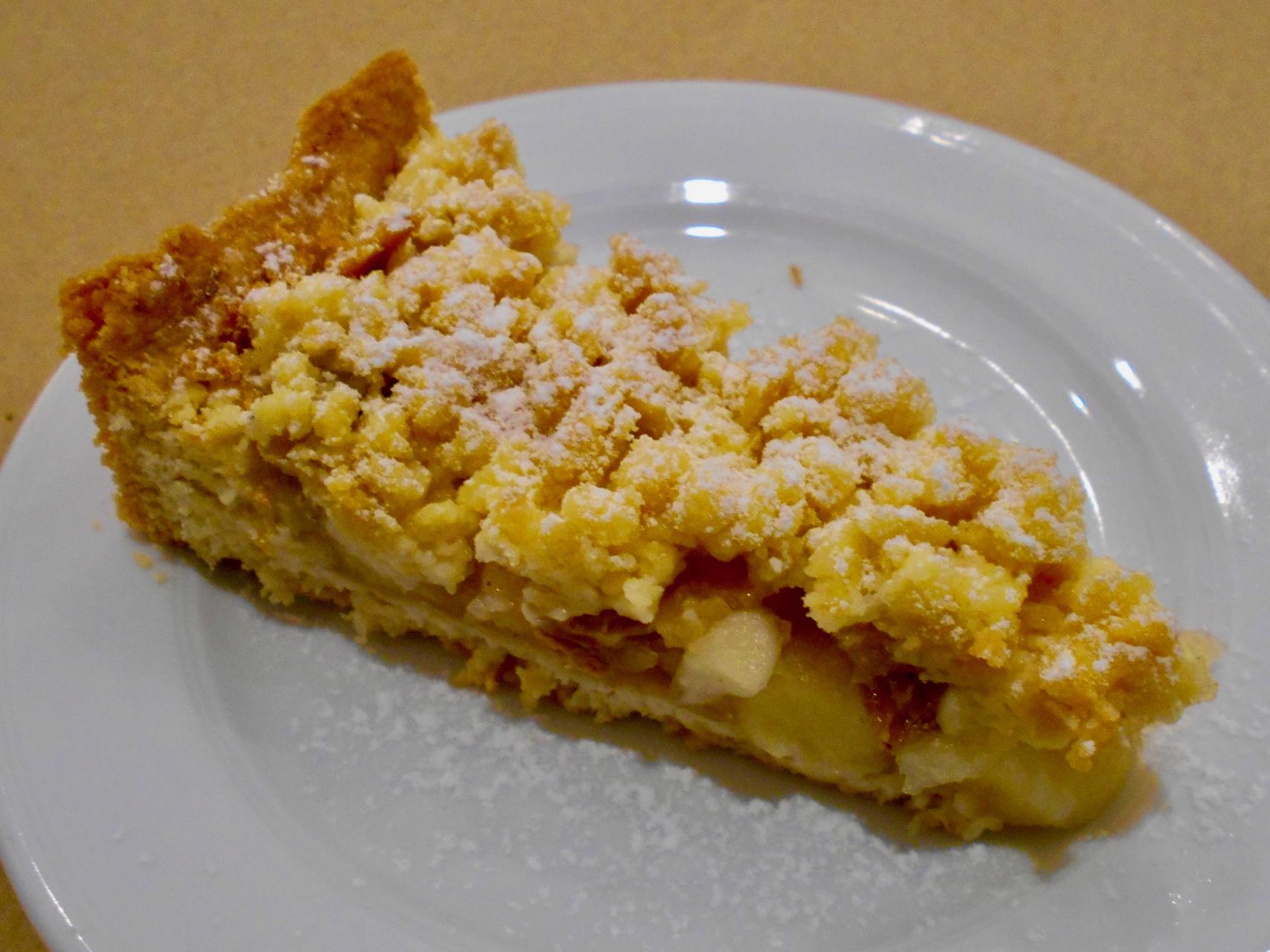 The dessert was another surprise: an apple crumble tart. Thin slices of apple were baked in a deepish thin pastry shell and were then topped with a rustic crumble. The result was a succulent hybrid of a dessert that was also worth a 10.

To slice or not to slice that is the question…

When red meat is on the menu, most connoisseurs want their choice of cut to be thick…very thick. Have you ever heard anyone asking for a thin entrecôte? It doesn’t happen.
Real meat lovers sometimes order a beef chop that weighs two kilos…and it will be for three diners. And in the Basque Country (where appetites are gigantic) the two-kilo chop is normal for two. 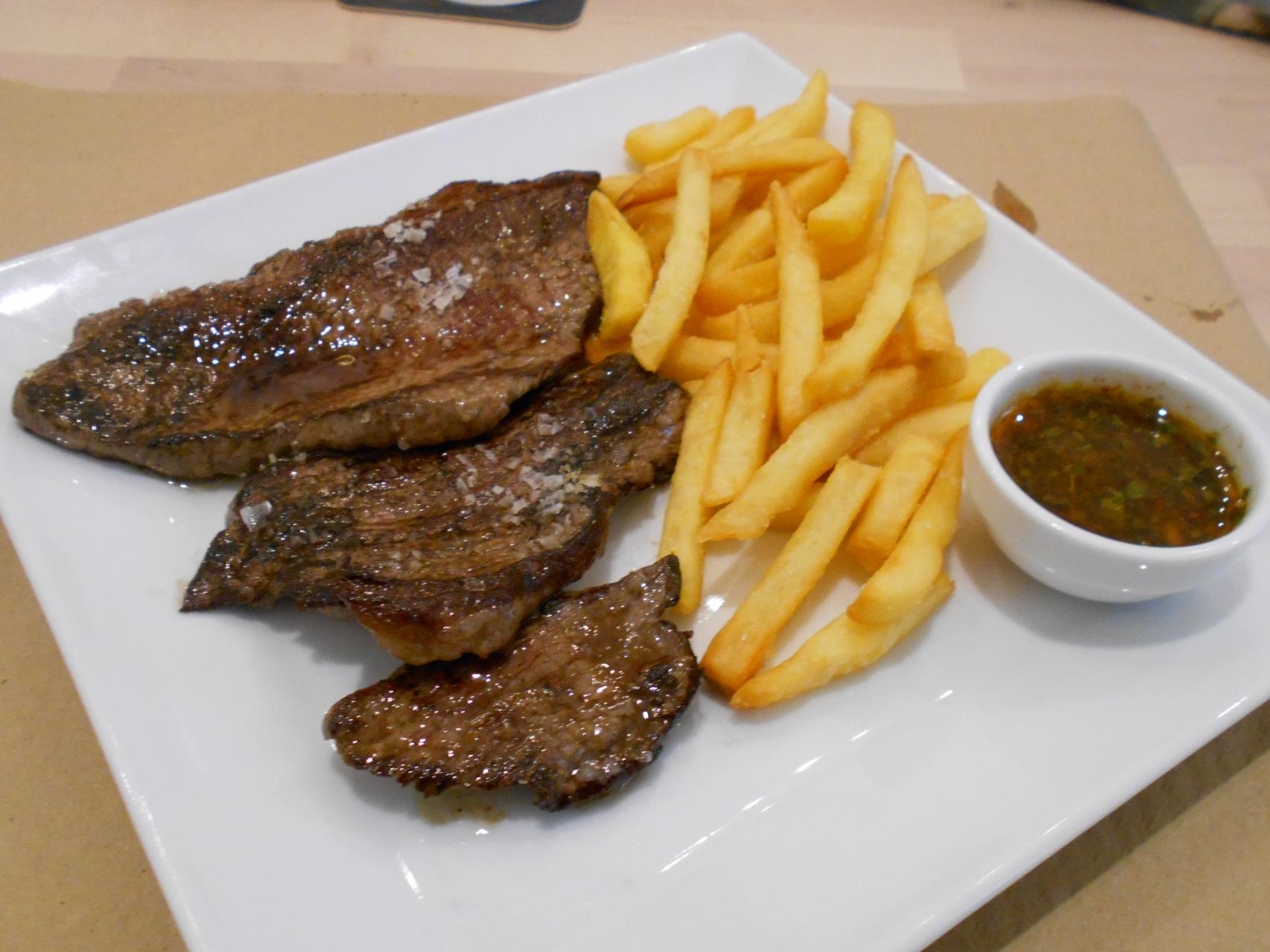 Some cuts of red meat, such as the French onglet, the Argentinian bifé and the Brazilian picaña aren’t very big and most connoisseurs want them as they come. Slicing them is out of the question.

So knowing that cook Fabián is an Argentinian, I was surprised (indeed, shocked) to see my 200 grs picaña was sliced into three pieces.

Fabián knows better than most of us that a picaña should come as a single piece (in this case a 200 grs chunk) and not in three slices.

I can only guess that most of his regular customers (and he has plenty) want their picaña to be sliced. I think he should have taught them that picañas are thick pieces of meat.
At the old Doñana Grill, which specialised in Italian fresh pasta and steaks of different kinds, the owner’s wife didn’t tolerate any quirky orders.

I once went with a friend who always had an entrecôte and asked for it to be well done…extremely well done. Well, the owner’s wife told him that would ruin an entrecôte and she wasn’t going to serve one that was anything more than medium rare.

She said he could have a fillet steak, which wouldn’t be absolutely destroyed with overcooking, but he wasn’t having an entrecôte. He had the fillet steak. I admired that woman for despotic attitude. Overcooking does destroy an entrecôte.

When a cook slices a 200 grs picaña (a most generous portion for a dish at €13.50) he by no means destroys it, but the connoisseur’s enjoyment is also sliced rather thin. I think those ordering a picaña should be asked if they want it in one piece or sliced.

Having said all that, I must add immediately that this picaña was a splendid piece of meat and Fabián got those tender thin slices well charred on the outside and absolutely rare inside.

I asked for the chips to be very hot and they came at a tongue-burning temperature. That little dish is the traditional herby chimichurri sauce. I usually have a single taste to see what it’s like by dipping the fork into it. But this one was so scrummy I finished it off.

In the centre of Palma (and some of the outskirts) you will find small restaurants tucked away in side streets that do reasonably priced menús del día. They are well worth trying. You should do as I often do and give them a try. There are many lovely surprises out there. The €15.50 menú del día at Elías Urban Kitchen was especially memorable because Argentinian cook-owner Fabián Luzzini is a real pro who is also multi-talented. His menú was nicely balanced, starting with a simple spaghetti from Italy’s ‘cucina povere’ days done with a tiny amount of sautéed veggies and dusted with paprika. 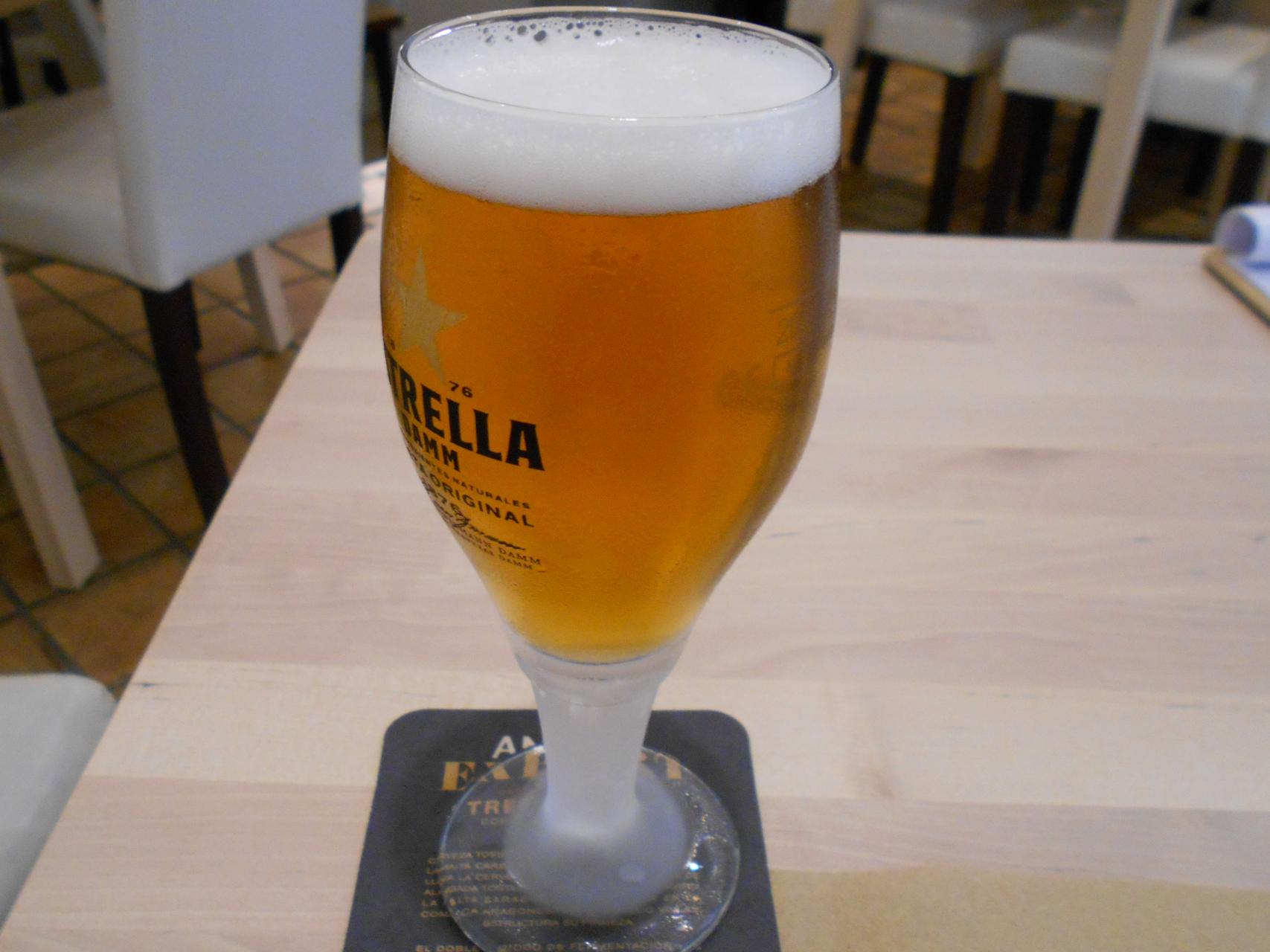 The mains was a superb fillet of hake that was neatly rolled up and presented on a mound of deep-fried nuggets of potato and served with a delish orange-based sauce with lovely flavours of the fruit and tangy citric notes. I seldom see such well made fish dishes on a €15.50 menu del día, one of the reasons I gave it a 10 rating. An apple tart in a deepish pastry shell and topped with a rustic crumble, was a hybrid dessert that was also worth a 10.

Elías Urban Kitchen Restaurant, Calle Sant Eliés 6, Palma (off Calle Olmos). Tel: 635 41 88 21. Open on Monday to Saturday from 9am and for the menú del día. Open for dinner only on Fridays.