Celebrate the arrival of spring with new potatoes…

Choose new potatoes that are firm, dry and blemish-free

Mallorcan seasonal new potatoes are found in the heart of the potato growing region around the village of Sa Pobla. Local growers have been exporting potatoes grown in its red clay soil to the UK since 1924 and thanks to our warm sunny climate, local new potatoes can be planted early and the locals call it a “miracle of the land” because the potatoes in Sa Pobla can be harvested up to three times every year without much need for crop rotation or for leaving the land fallow.

It’s strange to think that potatoes were by no means an instant success in the western world; they were thought to have originated in Chile when prehistoric tribes took them to the Andes region of Bolivia, Ecuador and Peru. The potato had been cultivated for centuries in South America before the Spanish conquistadors arrived and took them back to Spain and Portugal in the 16th century, although Sir Francis drake is credited with discovering them in Chile and bringing them back to England in 1577.

By the 18th century potatoes were still excluded from the great French tables and were thought to cause leprosy. In England the puritans distrusted them, as the humble potato was not mentioned in the bible, although it had become an important crop for the masses. The chemist Antoine August Parmentier was imprisoned in Prussia and fed nothing but potatoes during the seven years’ war. He returned to a starving France and set up soup kitchens in Paris to assist the poor. He went on to champion the use of potatoes and did much for their popularity throughout Europe.

Potatoes are nutritious, and when cooked without fat, healthy, high in energy-giving carbohydrate and low in calories. Potatoes are a fantastic ingredient for any cook as they are so versatile and can be cooked in so many different ways; they are also a great vehicle for absorbing loads of other flavours.

Choose new potatoes that are firm, dry and blemish-free. Unwashed potatoes last longer as the dirt protects them from bruising and general deterioration.

You really don’t need to peel new potatoes; just rinse to remove any dirt and cook whole. When boiling new potatoes always start them in cold water, as they tend to toughen when dropped into boiling water and add a good pinch of salt.

For something a little more unusual, try “papas Arrugadas” from the Canary Islands.

1 Bring the potatoes to the boil in a large pan of salted water, and simmer for 15-20 minutes until tender.

2 Meanwhile, whisk together the mayonnaise, mustard, oil and lemon juice in a large bowl.

3 Drain the potatoes, reserving 2 tbsp cooking liquid and leave to steam for a couple of minutes.

4 Halve the warm potatoes and add to the mayonnaise mixture with the reserved cooking water.

5 Toss to combine then stir in the remaining ingredients.

6 Season to taste and serve warm. 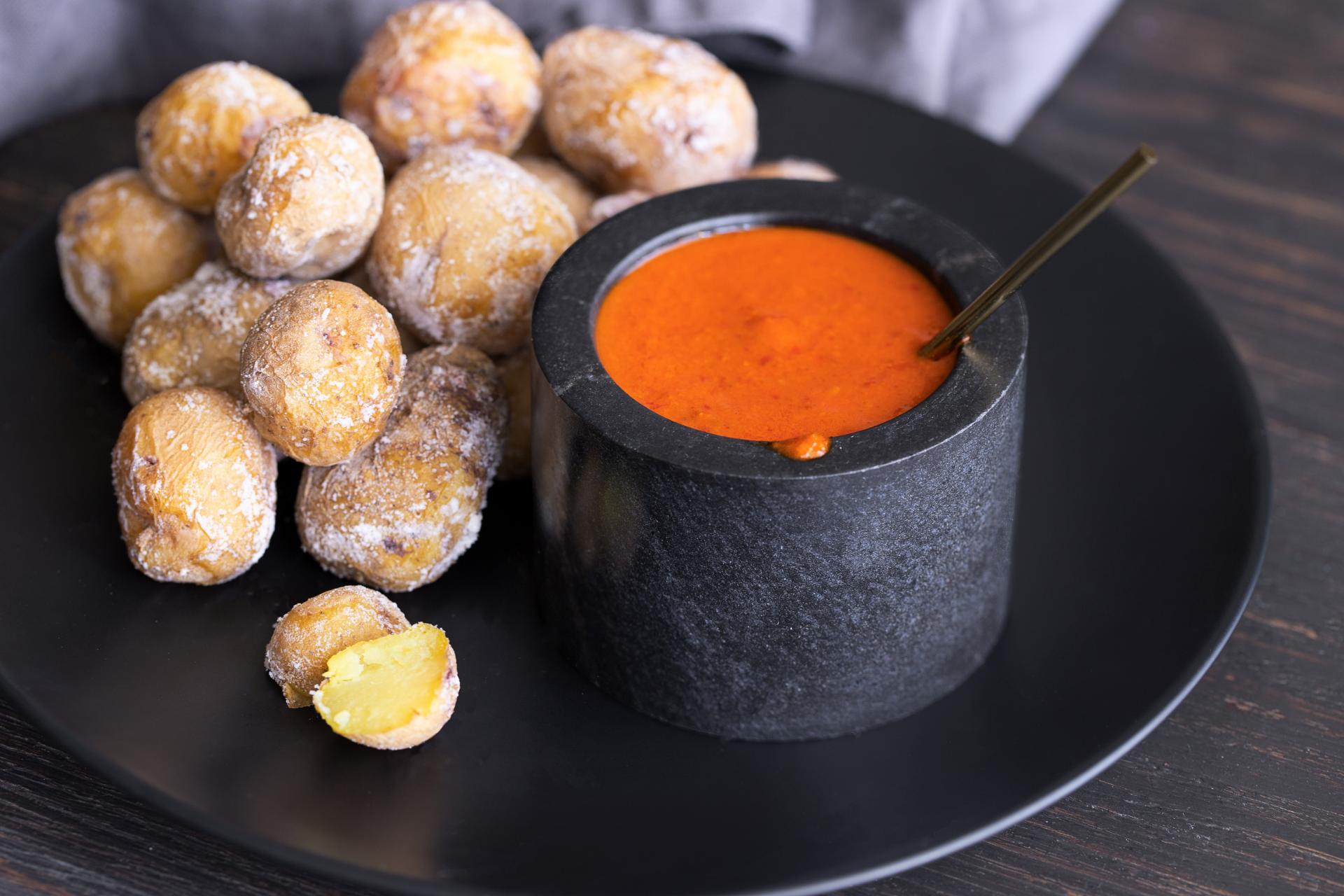 This is an unusual way to cook tiny, new potatoes from the Canary Islands and although they look more wrinkly than Mick Jagger, they taste a lot better than they look.

1 Clean well the potatoes, leaving the skin on. Place them in a saucepan and cover them with the water and salt. Cook for 15-20 minutes until the potatoes are just cooked.

2 Drain the potatoes and return to the same saucepan with no liquid.

3 Place them over a moderate heat and turn them over 2 or 3 times. The salt will stick to the potatoes and they will become “wrinkly”.

1 Place all the ingredients in a food processor and blend to a smooth paste. Place in an airtight container and chill until required. 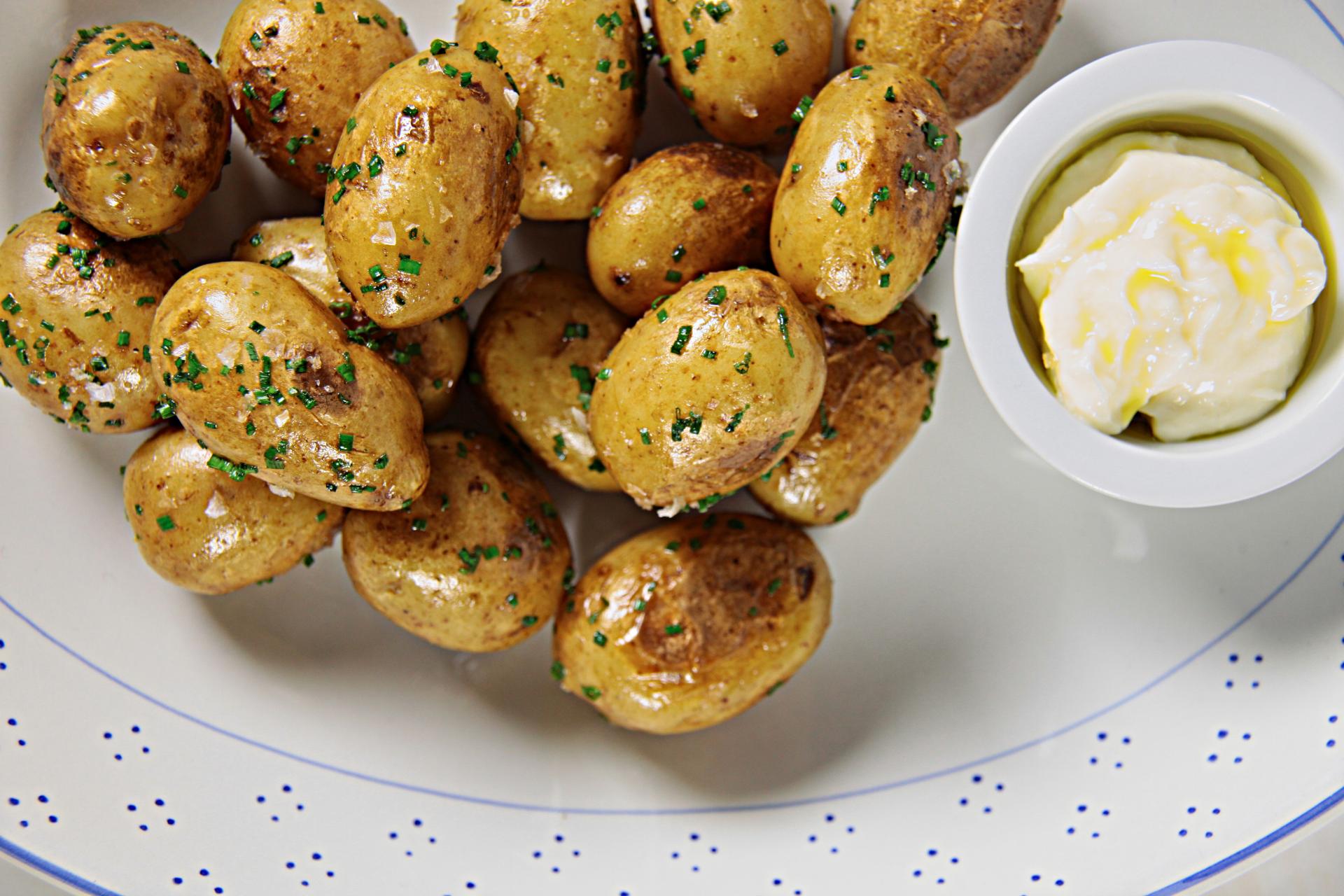 2 Spread the seasoned potatoes across a baking dish. Bake for about 45 minutes, shaking the baking dish after 20 minutes to flip the potatoes.

4 Add lemon juice and a few drops of water, season with salt and pepper.

5 Sprinkle the potatoes with chopped chives and serve with ali-oli.