When the heat gets too high try sorbets

In the middle of May we were suddenly catapulted into high summer temperatures and many of us didn’t like it very much. Trying to keep cool was the number one priority for some people. I found a nice refreshing spot right in the centre of town that was completely free of charge: at the top of La Rambla where the fountain is.

There is usually a bit of a breeze coming down from the mountains at that crossing and it’s strong enough to blow some of the fountain’s spray towards the stone bench where I sit for a five-minute break. Sometimes I relax there for longer than five minutes, enjoying a banana and a piece of crisp baguette before continuing on the shady side of the street until I reach home.

Cold drinks, ice creams and sorbets are also extremely pleasant when the summer heat has been turned on full blast. But their bracing effect doesn’t last for very long. Still, slowly supping an ice cream or a sorbet in a shady spot with even just a hint of a breeze is quite delightful while it’s happening. I almost never have desserts when doing the restaurant review (except when I’m having a menú del día), but winter and summer I sometimes stop for a sorbet or an ice cream on my way home at lunchtime.

Sorbets are possibly the most effective coolers you’ll find in local cafes. They are simply crushed ice with fruit and each spoonful gives a lovely sensation of freshness. These glasses of crushed ice were popular in Mallorca long before the French nouvelle cuisine chefs started a craze for them in the early 1970s. They already existed in Mallorca and were called granizados. The three most popular flavours were orange, lemon and coffee. In Italy they had granita, which were called waster ices in England.

Another of the beauties of sorbets is that they can be made from just about anything you have at hand. We learned that from the nouvelle cuisine chefs who tried all kinds of outlandish ingredients in an attempt to be different. Their unexpected flavours of the month included sardines, anchovies and garlic.

Perhaps the biggest mistake people make when doing sorbets is that they don’t whisk them enough once they are in the freezer. The early beating of the mixture helps to ensure ice crystals don’t start to form.

If you forget to whisk, or don’t do it frequently enough, don’t worry. Just call it a Spanish granizado instead of a sorbet, because a few ice crystals are quite acceptable in granizados. Some people whisk an egg white into their sorbets, others don’t. Try it both ways and see which you prefer. 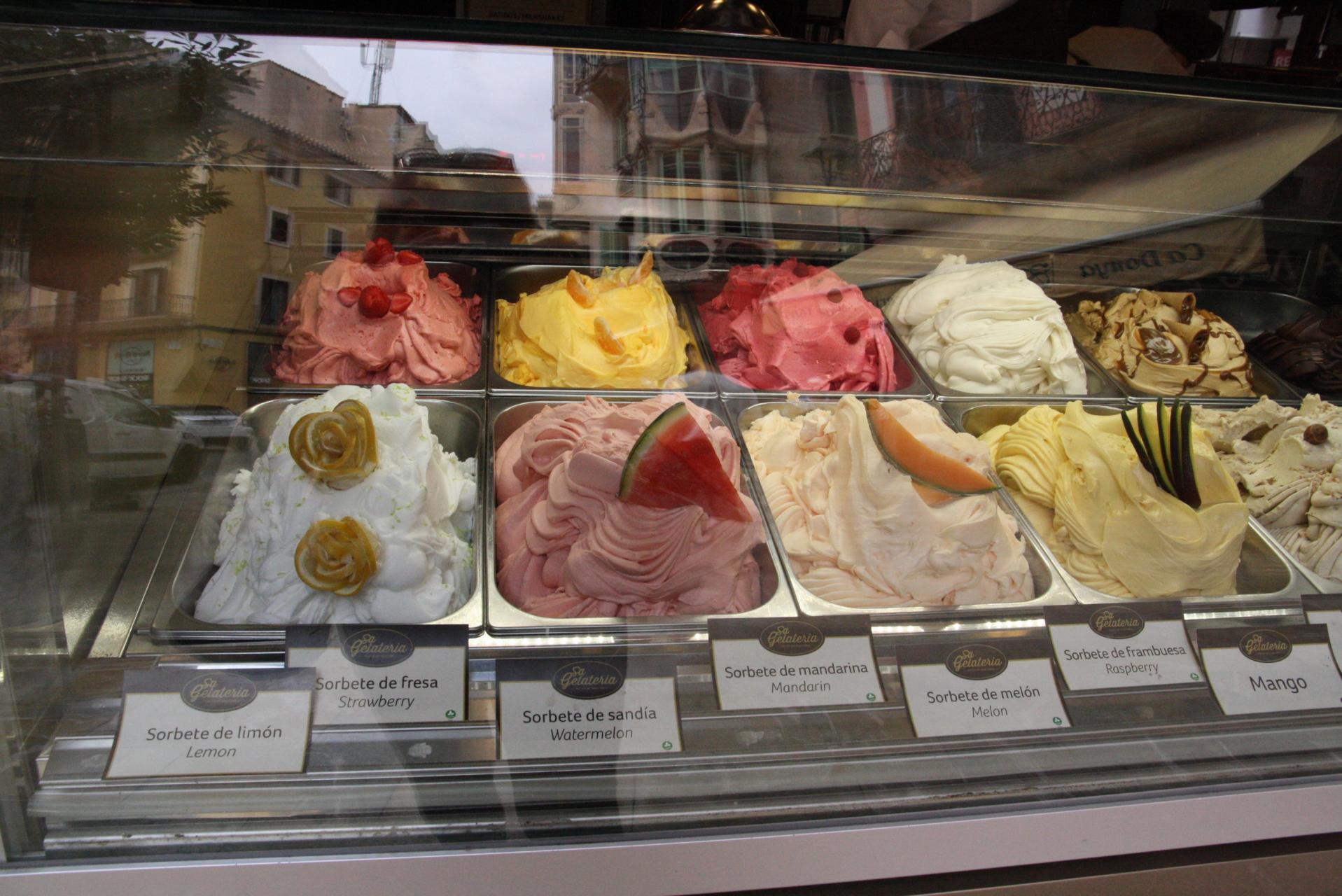 Sorbets always start out as highly flavoured syrups, usually containing the juice of the fruits you are using, plus water and sugar. It sometimes includes the pulp of the fruit, as in melon sorbet.
When this mixture is ready, it is frozen in shallow metal trays. At the same time you put a bowl and a whisk into the freezer.

Wait until the mixture in the trays is about half frozen, transfer it to the bowl and give it a good whisk. If you are using an egg white, whip it in at this stage. Return the bowl to the freezer and beat it every 15 minutes or so. This will keep the ice crystals at bay and your sorbet will be a smooth one.

You shouldn’t be pretentious when serving sorbets, such as arranging spoonfuls on a plate as if they were leaves and making a stem with melted chocolate. Serve them in a smallish elegant glass. The classic martini glass is ideal.

You can make the traditional Spanish coffee granizado by adding 350 grs of sugar to a litre of strong black coffee in a jug and stirring until the sugar dissolves.
Give it a thorough stir from time to time. It should have a slushy finish with a nice caffeine kick. You can add sugar to taste, but it shouldn’t be too sweet.

Some Mallorcans like to take their granizados through a straw before eating it with a spoon in the final stages. Others prefer to use a spoon from start to finish.

Sorbets, like so many other culinary inventions, originated in China and at first were simply snow mixed with crushed fruit and honey. From China they found their way to India, then Persia and Egypt. They became popular with the ancient Greeks and Romans. The Arabs introduced them to the West, especially through Spain and Sicily. Ice creams and sorbets as we know them today came from Italy. When Catherine de Medici married King Henry of France in 1539, she took her own Florentine cooks with her. One of them, Buontalenti, delighted the French royal circle with his ices, until then unknown in France.

Ices became known in England when two other Italians, de Mirra and de Marco, took them to the Court of King Charles I (1600-49). Ices in those days were simply frozen fruit juices that were eventually called sorbets.

A Sicilian, Francisco Propcopio was the first person to sell ices in Paris. That was around 1670. Six years later, Paris had some 250 outlets that specialised in ices. So jumping on business bandwagons, so popular nowadays, is nothing new. Ices with the addition of cream, what we now know as ice cream, were first made by Tortoni, who owned a cafe in Paris that was famous in the latter part of the 18th century. It is obvious from the above that Italians have been associated with sorbets and ice creams since the earliest days.

It was usually Sicilians or Neapolitans who were the itinerant sellers of ice cream, although it was a Genoese, Giovanni Bosio, who took ice cream to America. Until the First World War, when appetites and menus were gargantuan, sorbets were served in the middle of a meal (after the hors d’oeuvres, soups, fish and other dishes) to refreshen the palate before going on to the roast meats.

If you look at old menus, however, you won’t see sorbets listed. They were considered such a natural part of the meal, like bread, that they were never given a special mention.
So in the 1970s, when the nouvelle cuisine chefs started to serve sorbets at the halfway stage of their meals, they were doing nothing ‘nouvelle’. As the old adage has it, there’s nothing new under the sun.

Thai food is a great bargain in Mallorca

Cool down with cucumber soup