When we think of potato salad, most of us envision one smothered in mayonnaise, but one of my favourites doesn’t contain even a speck of mayo

Potatoes are like rice, polenta, cous-cous and pasta in that they are one of the world’s great staples. And just like those other four, one of their main jobs is to absorb the flavours of the other ingredients in a dish. Potatoes are eaten all over the world, although theyare used to a much lesser extent in Oriental cooking.

Most of us haven’t eaten Chinese dishes made with potatoes, but they do exist. They are an extremely versatile starch: we can use them to comfort us on freezing cold days and they can be just as soothing on the hottest day of a Mallorcan summer. And that brings me to one of the most popular dishes I know: potato salad. There must be some people who don’t like potato salad, but I’ve never come across any of them.

No two cooks ever make identical potato salad. If you gave 20 people the same mayonnaise, potatoes from the same crop and the same flavourings, you would get 20 quite different potato salads. The fact is, however, that few people nowadays do a plain potato salad like the one mentioned above: all cooks add little touches that make their salad special and different.

Some include anchovies, other slivers of roasted red peppers, canned tuna, boiled prawns or snippets of crisply fried bacon. Black olives are a favourite ingredient, both for their flavour and for a dramatic touch of black to what is essentially a white dish. Cold meats can be added to potato salad: chopped roast chicken, boiled ham or bacon, slivers of roast pork, thinly sliced salami and all kinds of firm white fish and other seafood. All of these additions can raise a potato salad to a light luncheon dish when we don’t want to get involved in cooking.

When we think of potato salad, most of us envision one smothered in mayonnaise, but one of my favourites doesn’t contain even a speck of mayo. It’s the classic Spanish potato salad dressed with olive oil, a little vinegar and finely snipped chives. For best results use virgen extra olive oil and a good quality red wine vinegar. 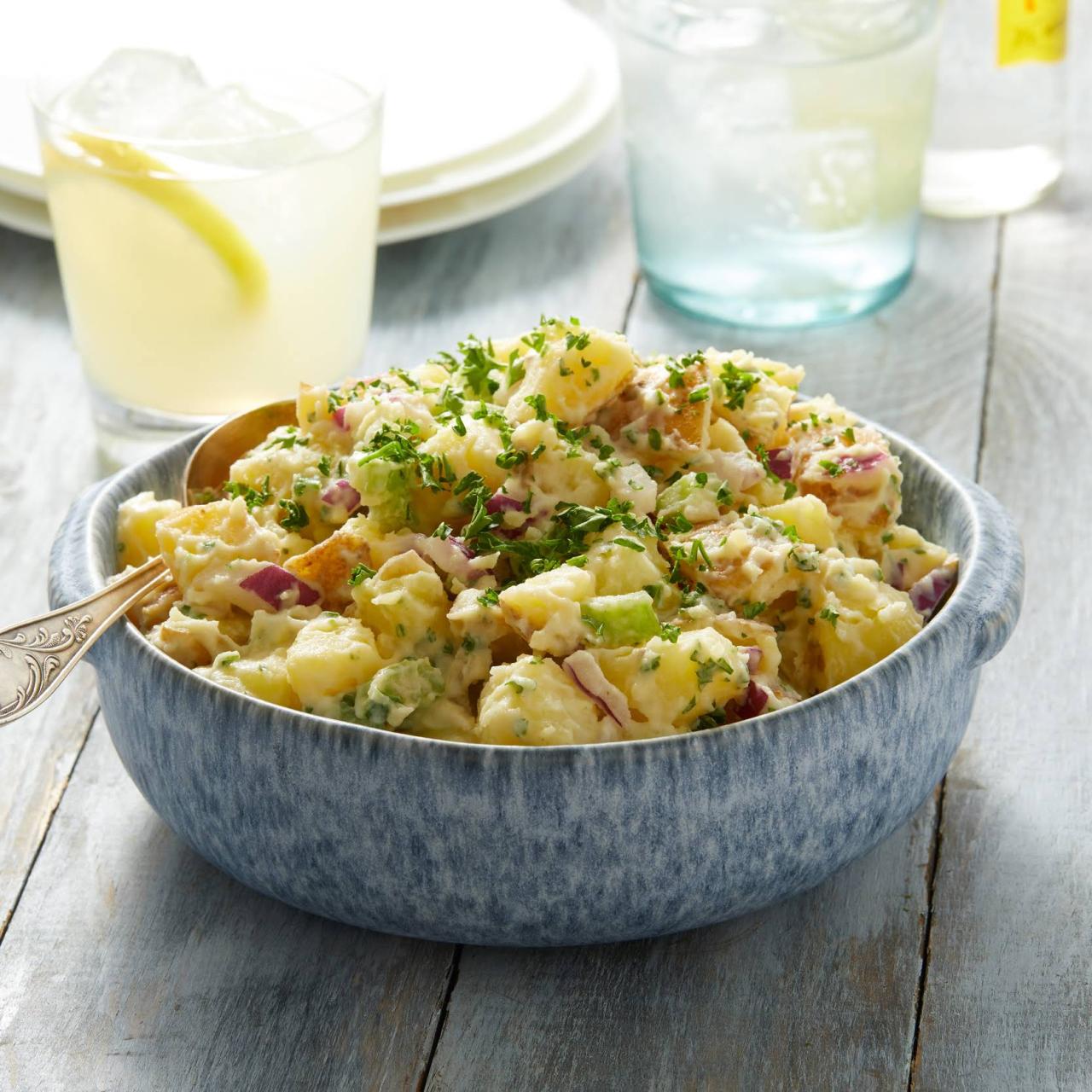 This kind of Spanish potato salad (the French have a similar one) will always taste better if you sprinkle some of the vinegar over the potatoes as soon as they are drained, leaving them for 10 minutes before drizzling them with the olive oil. Most Spanish housewives include little strips of roasted red peppers, roughly chopped anchovies, black olives (Mallorca’s panssides are best) or green olives stuffed with red peppers.

But the most important ingredient in a potato salad is the potato. For this one you should use the waxy kind such as the Mallorcan ‘patató’ that is available at most supermarkets.

Opposite the old Bulletin offices in Calle San Felio, there used to be a small tapas bar that served an unusual potato salad. It was simple and basic, consisting of boiled potatoes mixed with olive oil, roughly chopped hard-boiled eggs, plus a few capers. And nothing else. The cook was unorthodox in that she used floury potatoes, so they disintegrated when the other ingredients were mixed in, leaving only a few lumpy bits here and there. Those floury potatoes came as a surprise but at the I thought this was simply the cook’s personal method, perhaps because it was more economical and less work than a conventional potato salad. But many years later, when reading Claudia Roden’s first edition of A Book of Middle Eastern Cooking, I came across the same salad.

It turned out to be a Sephardic dish, which accounted for its being served at this tapas bar: it was almost certainly a potato salad made by Palma’s Jewish community. Claudia’s recipe differed only in that it was more sophisticated and included a good amount of butter which helped to give it a rich succulent touch.

I gave my copy of Claudia’s books to an American woman I met at an art exhibition. She had just discovered Middle Eastern cooking and was keen to learn more. It was an altruistic little gift that had absolutely nothing to do with the fact that she was a vivacious and highly attractive person. Besides, Claudia had brought out a second and enlarged edition of the Middle Eastern cookbook and I had ordered it.

But for some reason the Sephardic potato salad wasn’t in the second edition, and Claudia didn’t include it in her magnificent The Book of Jewish Food, published by Penguin Books in 1999. I came to the conclusion that Claudia’s later research must have shown the potato salad wasn’t of Sephardic origin.

For Claudia’s potato salad, which may or may not be of Sephardic origin, you will need:

1. Peel the potatoes, cut them into wedges of roughly the same size and boil them in salted water until just soft. Drain them and put them into a deepish bowl with 150 grs of the butter in small pieces.

2. Mix the butter into the potatoes with a fork, at the same time gently breaking them. Season them with a small amount of black pepper and add 70 grs of the capers. Drizzle over some olive oil, but not too much to begin with.

3. Shell five of the hard-boiled eggs, chop them roughly and mix into the potatoes. If the mixture looks a bit dry, drizzle over some more olive oil. Let the salad rest for an hour and add more olive oil if necessary. The potato salad should be well lubricated but not swimming in oil.

4. Transfer the potato salad to a biggish flat serving dish and smooth the surface with a spatula. Mash the other three hard-boiled eggs with a fork until they look like breadcrumbs. Sprinkle them over the surface and dot the salad with the remaining capers.

5. This potato salad is unusual and so delicious that it will disappear very quickly once diners start to serve themselves.