The softy of the onion family, you will find fresh leeks in every chef's walk- in fridge...

Fresh leeks seem to be one of those fabulous vegetables that are often sadly overlooked these days. They're definitely not as popular as tomatoes or onions, they’re not weird enough to stand out, like rutabaga or romanescu, and they mostly go unnoticed. Which is a shame, because not only are leeks versatile and healthy, but also they are packed full of remarkable flavour.

The softy of the onion family, you will find fresh leeks in every chef's walk- in fridge; they form an integral part of the classic “Mirepoix”, a combination of chopped carrots, celery, leeks, onions and herbs used to add flavour and aroma to stocks, sauces, soups and other foods.

I’m a big fan of leeks. As I young chef in the eighties, I remember eating at the 3 Michelin-starred Marco Pierre White’s and trying his Pressed terrine of leeks and langoustine tails with caviar and thinking that it was just about the best thing I’d ever eaten. This beautiful terrine was the perfect marriage of sea and earth, simply made with boiled leeks and cooked & shelled langoustine tails pressed into a terrine mould. When sliced, the layers created a stunning green, white and red mosaic. It was then garnished with a generous spoonful of caviar. That fantastic dish will live in my memory forever. 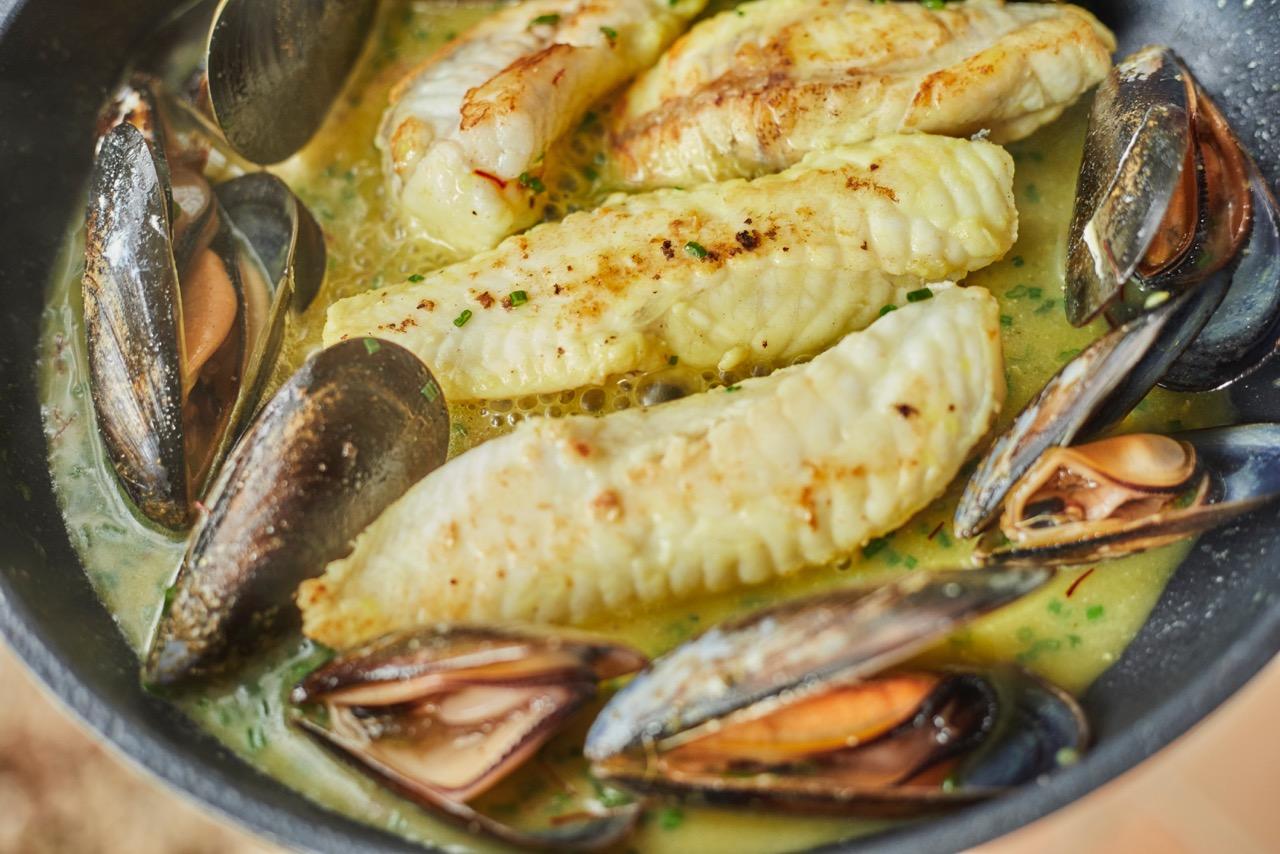 Heat the olive oil in a heavy bottomed saucepan and seal the monkfish tails on both sides for 1-2 minutes. Remove the monkfish and set aside. Add the chopped onion, leeks, saffron, paprika and garlic to the saucepan. Cook over gentle flame for 2-3 minutes until the onions and leeks start to soften. Add the tomatoes, white wine and fish stock. Cook over a gentle flame for 15-20 minutes until the sauce thickens. Add the mussels and reserved monkfish fillets. Cover with a lid and cook for a further 5 minutes until all the mussels have opened. Season to taste, sprinkle with chopped chives and serve immediately.

Sweat the leeks and garlic in the olive oil over a gentle flame. Add the potatoes, carrots and cover with fish stock. Boil for 10 minutes, liquidize then pass through a fine sieve. Season to taste.

Bake the fish in a hot oven until just cooked ( 2/3 minutes ) Warm the chorizo slices and mix with the cleaned rocket leaves, olive oil, chervil and chives.

To serve, place the salt-cod fillets in the centre of warm soup bowls. Place a small salad of rocket, herbs and chorizo on top and pour around the warm porrusalda. 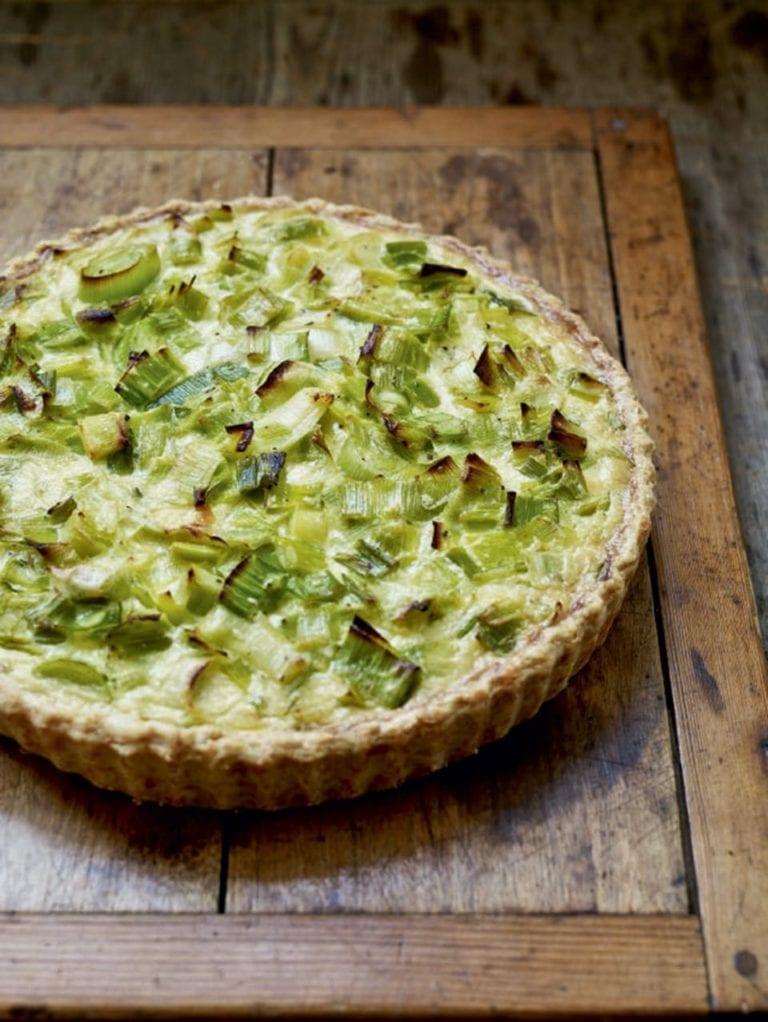 Sift the flour and tip it into a food processor or bowl. Add the butter & salt. Whizz to form breadcrumbs. Don't over-process it. Pace the dough on a floured surface and add 2 tbsp cold water. Start to bring the pastry together (you want to have as little contact with the pastry yourself as possible to stop it getting too hot). Wrap in clingfilm and chill for 30 minutes.

Roll out the pastry on a lightly floured surface to about 3mm thick. Line a 20cm tart ring with the pastry and rest in the refrigerator for at least 20 minutes. Sweat the leeks with the butter over low heat. They should become translucent. Add the flour to the leeks and mix over low heat. Add the warm milk and cook for 3 or 4 minutes until thick. Season and add the nutmeg. Stir in the grated cheese and leave to cool. When cool, pour into the tart ring. Roll out the remaining pastry and cover the leeks with it. Seal with your finger and trim with a rolling pin, rolling it on the edge of the tart ring. Prick the surface with a fork and glaze with egg wash. Bake for 30 minutes, at 200°C or 392°F at first, and lower the temperature down to 180°C or 356°F after 15 minutes. Serve warm. 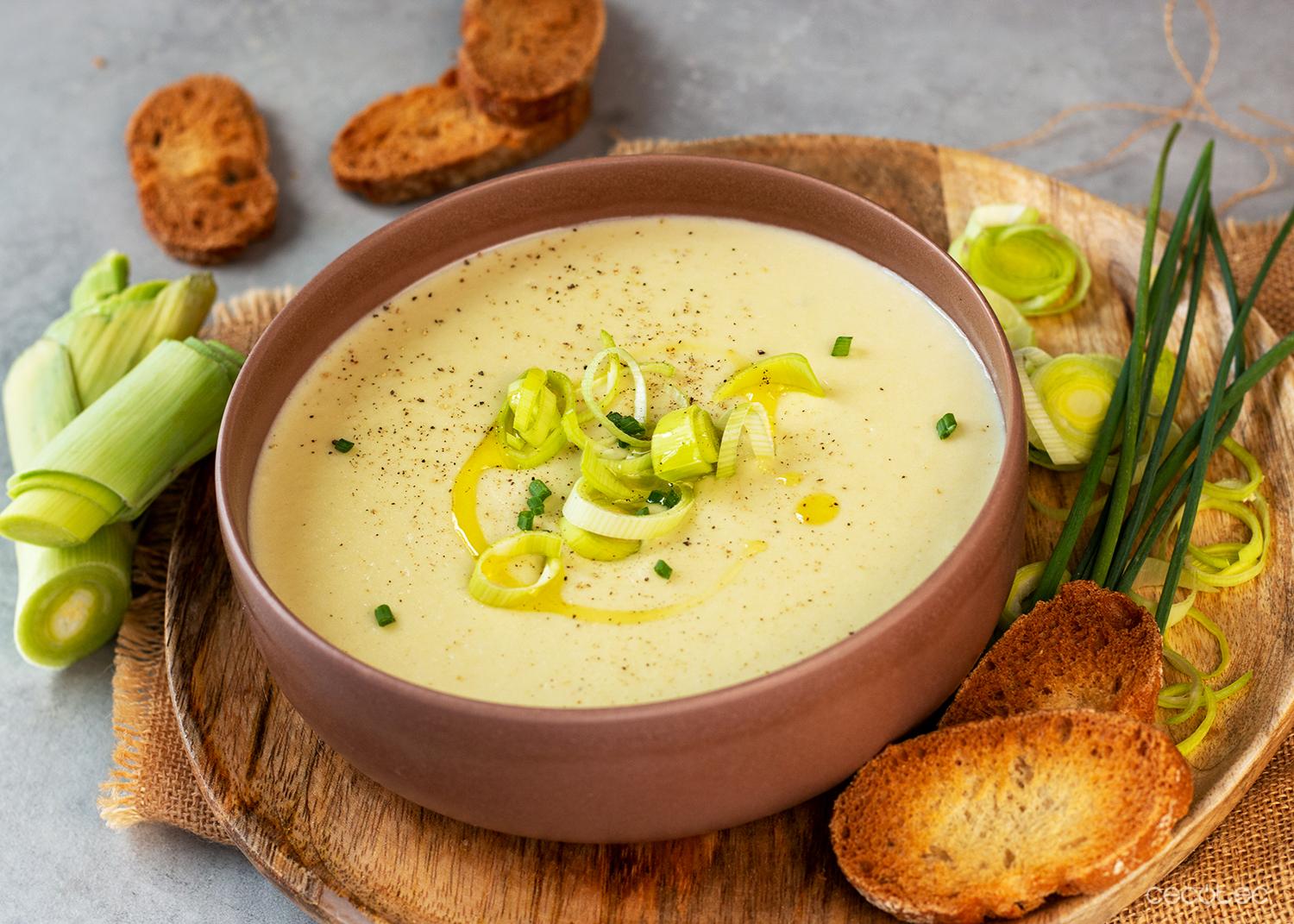 Gently sweat the leeks and potatoes in the butter then add the chicken stock and bring to the boil. Simmer for 15 minutes. Puree in a food processor and pass through a fine sieve. Add the cream and season to taste. Chill in the refrigerator. Finally, stir in the chopped chives and serve.