I’ve never really been a big fan of food trends. I mean, I understand them, but really, how can certain foods be hip? That’s just ridiculous…isn’t it?

Let’s be totally honest; hip food trends are for the nerdy middle class who clamour to be in any way relevant and cling on to any new fad that catches on for a while, before it eventually becomes oversaturated and the beautiful, fickle crowd moves onto the next “Big Thing” while sitting in their so-cool café’s with exposed brickwork walls being served by friendly hipsters covered in tattoo’s with long, bushy beards. Inevitably the lifestyle sections of major metropolitan newspapers pick up on the latest food trend, amplifying their popularity exponentially solely because cosmopolitan 20 and 30-somethings with lots of Instagram followers like to post aesthetically-pleasing shots of their Buddha bowls all over social media and before you know it they’re everywhere; talked about in the sort of terms that’ll make you feel like a culinary philistine if you don’t actually eat them...or heaven forbid, like them!

One food fad that just refuses to die is the burgeoning avocado trend, as you literally can’t walk into a hip café anywhere these days without finding some version of avocado toast; a dish so popular that it even has its own Wikipedia page! “Avocado toast is a type of open sandwich made with mashed avocado and salt, pepper, and citrus juice on toast. Many other ingredients may be used, such as poached eggs, salmon, strawberries, garlic, tomatoes, capers, onions and feta. It has appeared on café menus since at least the 1990s but began to take on political symbolism in the 2010s as a symbol of frivolous spending by millennials”. Political symbolisym!!...Have we gone completely mad?

Apparently, Miley Cyrus even has an avocado tattooed on to her left tricep but the name actually derives from the Aztec ahuacatl, meaning testicle, because it grows in pairs and hangs heavy from its tree. And now every day, 3 million new pictures of edible testicles on toast are posted on Instagram.

Spain today is the single largest European avocado producer, and exports to many countries. The Costa del Sol, along the Mediterranean Sea from Granada to Malaga is the largest producer, though the Canary Islands also produce avocados.

Avocados are harvested unripe, and ripen best between 15ºc and 21ºc. Don’t refrigerate them until they are ripe, and only for a day or two after that.

Take one bite into a luxuriously buttery and creamy avocado and you can’t help but notice that it’s loaded with fat. However, the good news is that the fat that’s in an avocado is mostly the healthier monounsaturated kind, similar to olive and nut oils. Avocados also contain loads of healthful nutrients and antioxidants. And if all these nutritional bonuses weren’t enough, research has shown that adding avocado to a plain green salad helps your body absorb more of the nutrients from the other ingredients.

I must admit that I love avocado and from toast toppings, desserts to smoothies, popsicles or the latest Avolatte (avocado latte), this versatile fruit really does have something for everyone. I’m guessing it will long outlast the poke bowl, the vegan Buddha bowl and the “so yesterday darling!” Sushi Burrito…but then again, what do I know?

This simple recipe is perfect for breakfast or a light lunch. It’s nothing revolutionary, but it’s delicious! 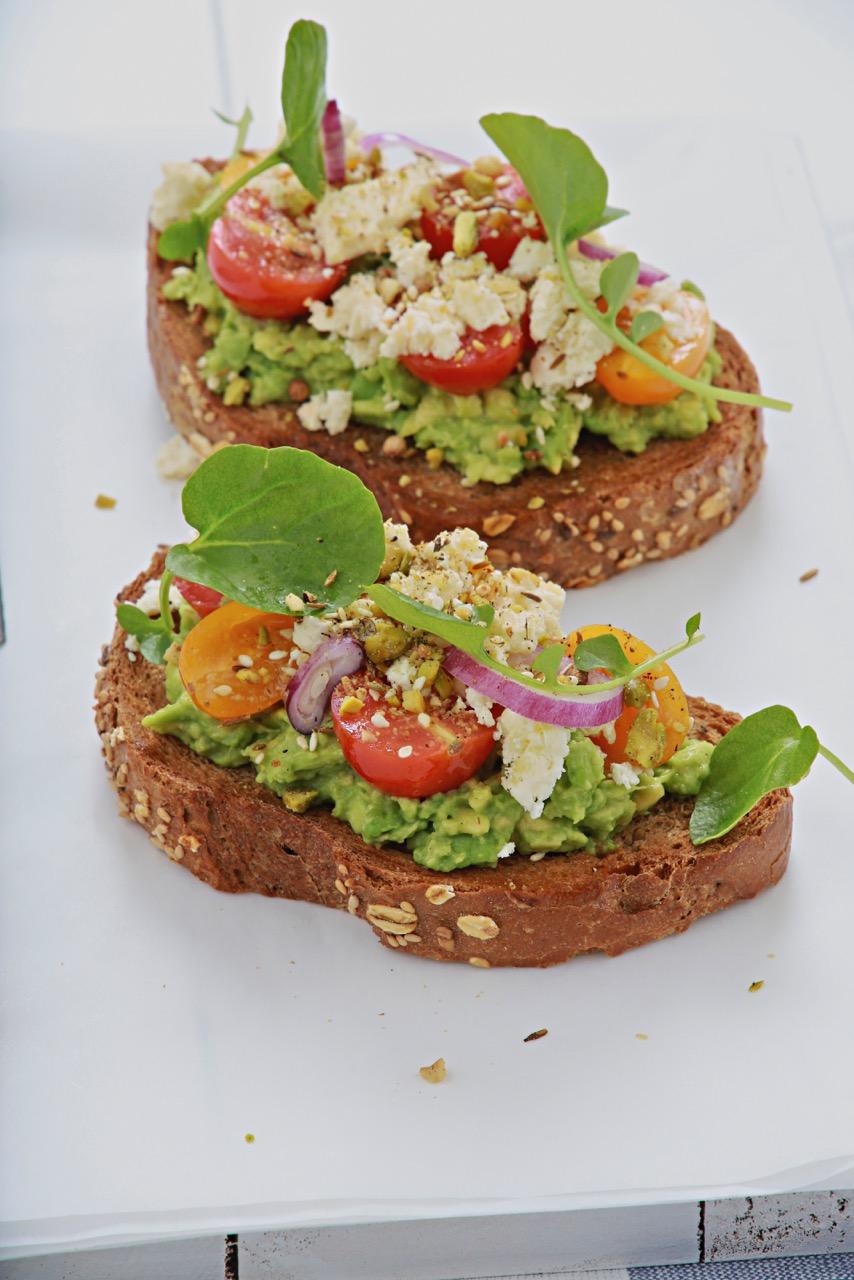 Place the avocados in a medium size bowl and crish roughly with a fork. Add mint and lime juice, mash until just combined. Season to taste with salt and freshly ground black pepper. Toast or grill the wholemeal bread slices until golden. Spoon 1/4 of the avocado mixture onto each slice of bread. Top with crumbled feta cheese and cherry tomatoes. Serve immediately garnished with extra mint and a sprinkling of sesame seeds. 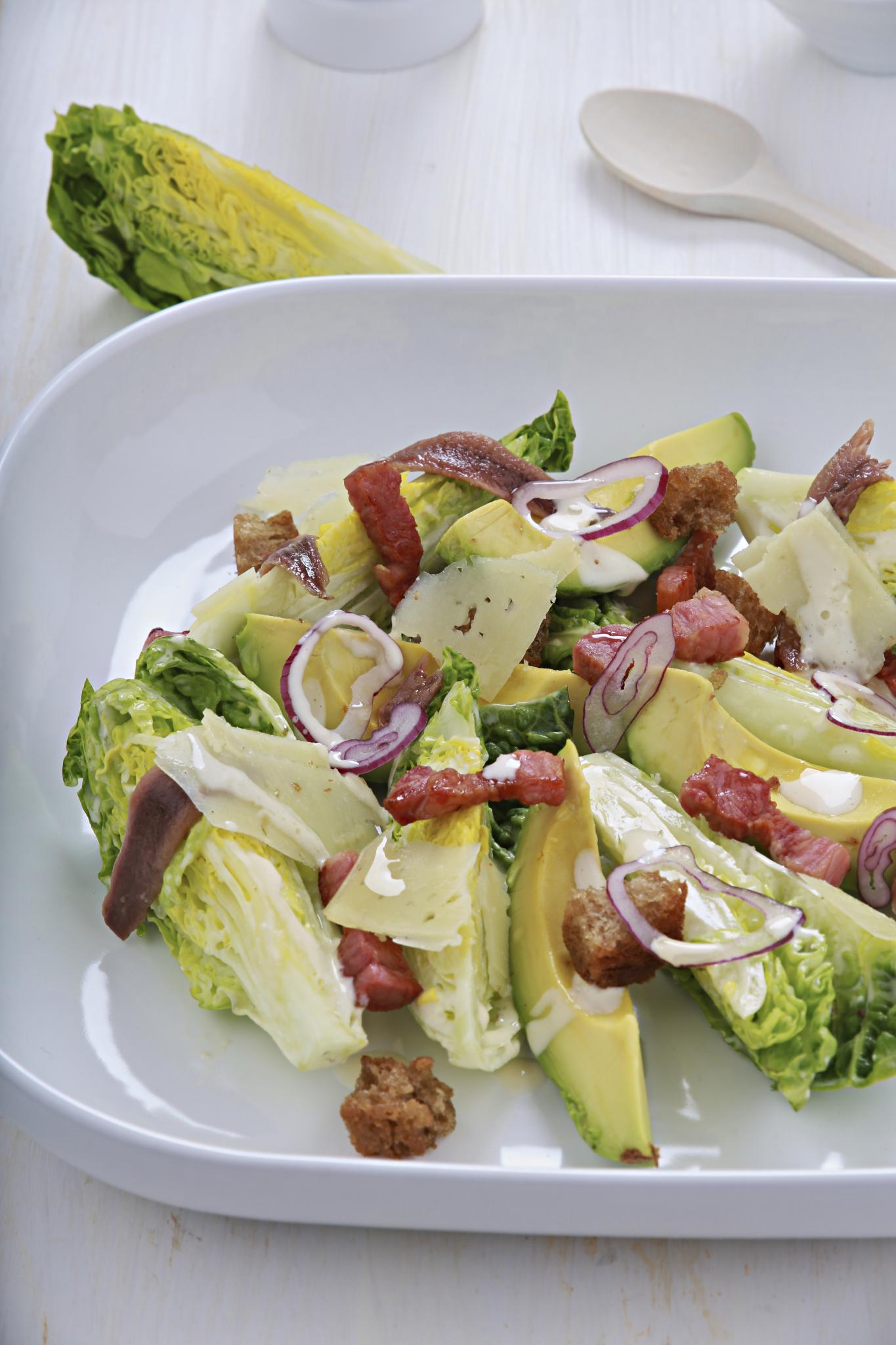 Discard the tough outer leaves from the lettuce. Cut the remaining leaves into large pieces and wash the lettuce under cold running water. Transfer to a salad spinner and spin to remove as much water as possible.

To make the dressing, in a bowl, combine the mayonnaise, lemon juice, mustard, garlic, and whisk to blend well. Slowly whisk in the olive oil. Season to taste with salt and pepper.
Heat a large frying pan and fry the bacon until it is crisp and browned on both sides. Remove the bacon and add the diced bread with the olive oil. Cook 2-3 minutes, or until golden.

To assemble the salad, combine the lettuce, croutons, anchovies and half of the dressing and toss well. Add the avocado slices and sprinkle with cheese, red onion and cracked pepper to taste. Serve immediately with the rest of the dressing.

Cut the avocados in half lengthways, remove the stones and peel. Put the avocado in a food processor with the lime juice, olive oil, Tabasco, garlic, chopped chives and sea salt.
Blend until you have a light green puree.Transfer the cream to a bowl and sprinkle with chopped chili & dukkah. Serve with cucumber sticks and toasted bread.

Lightly roast the seeds and nuts in a hot oven until they begin to colour and release their aroma. Put them in a food processor and grind them to form a dry mixture. Do not over work them.