Basil: most faithful visitor to Majorca

Majorca has many harbingers that announce the summer weather has arrived and the one I relish most of all is the sight of pots of basil at market stalls. I saw the first of the year’s new crop two weeks ago at the Santa Catalina market.

The return of basil, as faithful an early visitor to the island as any northern tourist looking for a bit of sun, means we can now add its exquisite perfume to summer dishes. I’ll be using it, as I do every year, mainly on pastas, and salads of sliced tomatoes imported mozzarella or fresh cheese from Burgos.

Although basil, called albahaca in Spanish, is very much associated with the Mediterranean, it isn’t a popular herb in Spanish regional cooking. Some of Spain’s standard cookbooks and gastronomic encyclopedias don’t even list it.

Magazine readers come cross the word from time to time, often in connection with some trendy cook eager to add a little-known herb to his latest creations. Although it has such a minor role to play in local cooking, plenty of basil plants are on sale in markets and shops all over the island.

One of the reasons for this availability is Majorcans believe a few basil plants on the terrace or patio stops mosquitoes from going indoors. Some say mosquitoes like basil’s perfume as much as we do and stay near the plant instead of going indoors. My personal experience is that I usually have up to 30 basil plats on my balcony and mosquitoes in the bedroom are never a problem.

Another reason so much basil is on sale is that it features in religious festivals during August. One of these is the traditional ‘romería de Sant Bernat’ on 20 August, the day of Saint Barnard. 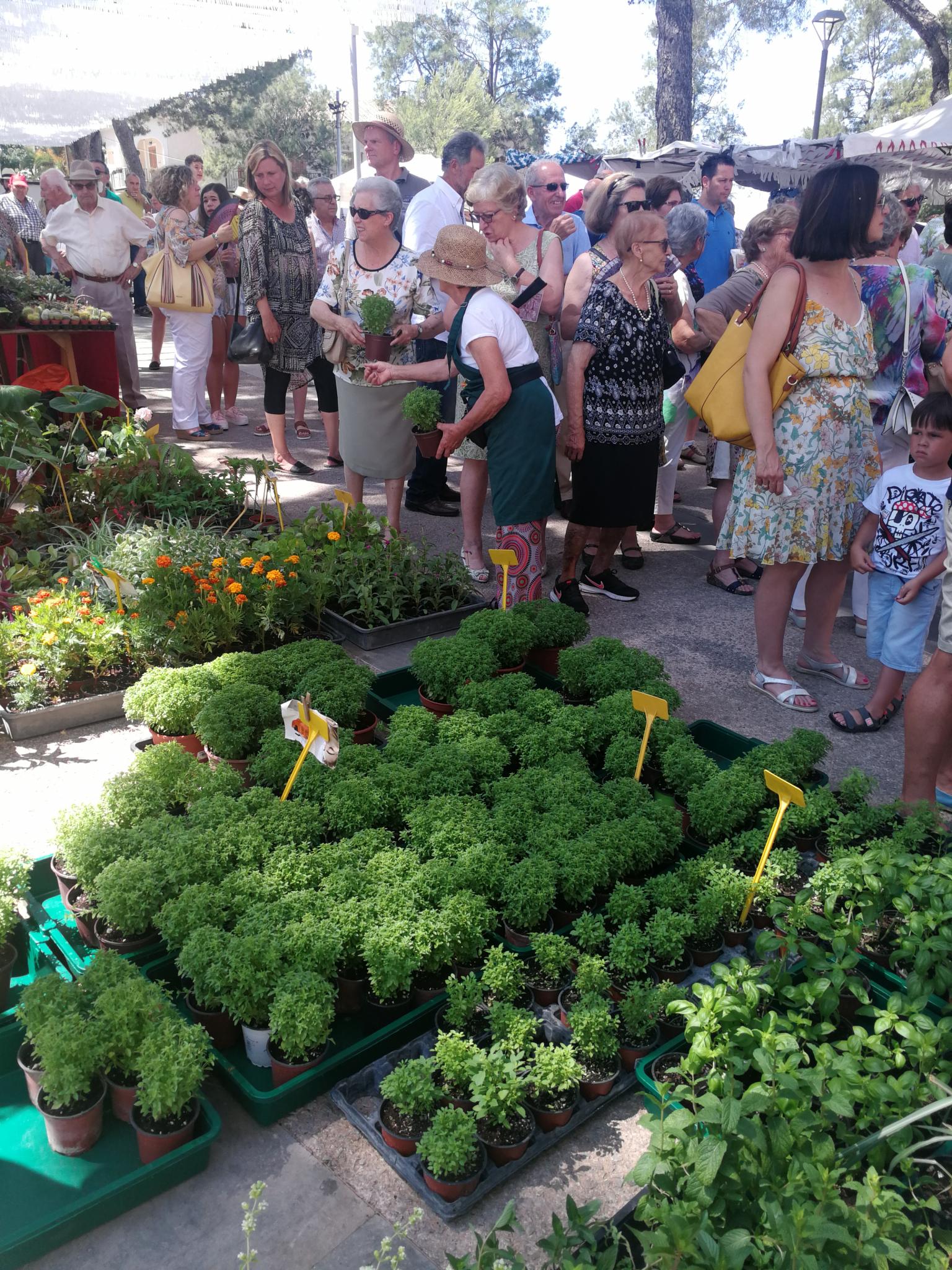 This pilgrimage starts from the Ayuntamiento in Plaza Cort goes to Secar de la Real on the outskirts with its little monastery of Santa María de la Real. It’s quite a walk on a hot August day.

Some 60 varieties of the plant exist, including several types of sweet basil, at least three kinds of bush basil, plus purple, lettuce-leaf and lemon basil. Like most other herbs, basil contains essential oils that produce their characteristic aromas.

The fragrance and taste, and whether it is pungent or sweet, depend very much on the proportions of these oils in each variety. However, don’t expect to find 60 varieties at local markets — not even in garden nurseries in England.

I have only ever seen three main varieties in Palma: those with large, medium or small leaves. I used to buy some of each, but nowadays I prefer large-leaf basil. And the bigger the leaf, the more I like it. Large-leaf basil, when looked after properly, grows very well. When I put three or four of these plants into a large pot, it becomes a veritable bush by the end of July.

The small-leaf variety, known as bush basil, has one big disadvantage for me: it very quickly starts to flower. It needs constant watching and those tiny flowers must be nipped out as soon as they appear. If you want your bush basil to flourish, this battle of the flowers is one you must engage in — and win. If allowed to flower, the plant’s DNA tells it to produce seeds, which is the principal job of an annual plant, and then it starts to die: its life cycle has been fulfilled.

Some people say you should let a basil pot dry out between waterings. It is a mistake to do this during the furnace-like heat of a Majorcan July and August. Basil is a sun worshipper, but it also needs an abundance of water — and you’ll never be able to give it too much during a Majorcan summer.

Botanical experts say basil originally came from India and Thailand. It travelled to the Middle East and from there found its way to Europe and the Mediterranean.

The word basil has two lexicographical roots. One is the Greek word ‘basileus’, meaning a king. Another related derivation comes from ‘basilisk’, a legendary and fearsome reptile that could kill simply by looking at its prey.

Both terms give us an idea of how ancient people rated basil: for them it had a certain power and presence most other herbs lack.

Basil’s original attraction went further than the garden, kitchen or dining table. In India, a variety called ‘Ocimum sanctum’ (holy basil) is sacred to the Hindus. It features in religious ceremonies: a sprig of holy basil was buried with the dead so they could be protected from evil in the next world.

The Italians, on the other hand, used basil as a traditional sign of love. In ancient times a young woman would place a pot of basil on her balcony to signal that her suitor could visit her.

Basil is now known mainly as a kitchen herb. The Italians use it more than any other nation, taking full benefit of its affinity with tomatoes and pasta.

You can buy large-leaf basil here but sometimes you have to look for it. The small-leaf bush basil is preferred by Majorcans and it is on sale everywhere. The best large-leaf plants I know of are at the flowers and herbs stall at the Santa Catalina market. The large-leaf basil season doesn’t last for very long, so if you want some you should get it sooner rather than later.

I first tasted fresh basil when I was 13 and it was in a back street restaurant in the old quarter of Nice. The chopped basil flavoured a tomato salad with a dressing of olive oil and a little garlic. Nothing else. I have been an addict ever since. Basil’s power to seduce me with its intense aromas and flavours have been repeated thousands of times since then. Even a mere suspicion of basil can turn me on.

I have fond memories of an appetiser at the now defunct Topetto restaurant in Calle Fábrica: two slices of lightly toasted French bread and still warm, the surface spread with a little tomato pulp, in the centre of which was a blob of crushed basil and virgen extra olive oil. The scent of the basil came wafting up as soon as the plate was on the table and when I bit into the toast the taste sensation was sheer ambrosia.

If you pound or finely chop basil leaves and put them into a jar and cover them with two centimetres of virgen extra olive oil, you can have ecstatic experiences like that for months on end. Such a mixture could be used for a plain tomato salad, but dress it as that Niçois cook did all those years ago: without any vinegar or lemon juice to distract your attention from the basil and olive oil flavours.

As imported mozzarella is now widely available in Palma, you can make a superb Italian salad by adding thin slices of mozzarella to your basic tomato salad with a basil and oil dressing.

Fresh tomatoes with the white Spanish onions now in season also make a heady combination when baked with basil. Slice very thinly a large amount of white onions and sauté them gently in plenty of virgen extra olive oil until very soft.

Peel and slice ripe tomatoes, layer some of them on the base of a well-oiled ovenproof dish, drizzle with olive oil and sprinkle with chopped fresh basil. Cover with a layer of the sautéd onions. Repeat the layers until the dish is full and cover with a generous layer of breadcrumbs. Drizzle the surface with virgen extra olive oil and bake in a moderate oven for 30 minutes or until the breadcrumbs are golden and crisp. Serve straight from the dish with suprêmes of sea bass (lubina), turbot (rodaballo), grilled chops or roast meats.

Basil and lamb’s liver also make an ideal couple and as it is frequently at El Corte Inglés in Jaime III, it’s a dish we can make during the herb’s short season. The simplest way of combining liver and basil is to coat thin slices of lamb’s liver with flour, sauté them in butter over a high heat for a short time, sprinkling them with finely chopped basil and garlic to taste.

One of the best ways of enjoying basil’s full aromatic blast is to chop it finely (or pound it in a mortar) and add it to long pasta of any kind dressed with lot of butter or virgen extra olive oil (or a mixture) with finely chopped or mashed garlic to taste.

Another good way of getting the basil blast is to add it to a thick plain tomato sauce and use it with any kind of pasta. But you must chop the basil extremely finely or mash it to a paste at the last possible moment and stir it into the sauce just before you use it.

Another way of enjoying basil’s powerful perfume is in a dish of mashed potatoes. This is so good it can be served on it own — which is how real basil addicts prefer it. But you can also serve it with just about any main course, including grilled, fried or steamed white fish and also roast lamb or beef.

To make his extra special dish get parmentine potatoes (available at most supermarkets) or the variety known as patata roja. Buy a kilo and a half and both should be of roughly the same size. Boil them unpeeled, simmering them so that the skins don’t burst. When the potatoes are soft, drain them and peel them while they are still hottish.

Put them through a vegetable mill into another pan or mash them with a heavy fork. Add 250grs of butter (some French cooks use more) some cream, and salt and pepper to taste. This mixture must be warmed up over a low heat so that it doesn’t scorch, but it also must be very hot to get the full explosion of aromas and taste when the basil is stirred in.

Have ready about 100grs of basil leaves reduced to a paste, with virgen extra olive oil added in small amounts as when making a mayonnaise. As soon as the basil mixture is well blended with the mashed potatoes, serve them on hot plates.

Basil and eggs were made for each other. You can use it with fried eggs, sprinkling on the finely chopped herb as soon as the eggs hit the frying pan. When having a soft-boiled egg, cover the tip of the spoon with finely chopped basil mixed with melted butter or olive oil, and dip it into the yolk.

When doing scrambled eggs, sprinkle on the finely chopped basil at the same time as you beat the eggs, and cook them over a low heat until they are nicely creamy.

A plain omelette stuffed with roughly cut basil previously gently sautéed in butter is also a sublime taste sensation. Be generous with the butter.