Another four 10S at the same place

The salmon was the best ever and worth a 10

After eating at the new Japanese place called Quinta Avenida in May of last year, the review started off: “It has never happened before. In the course of a single meal a restaurant managed to score four 10s — and one of them wasn’t even for the food. On two occasions there have been three 10s, but four is absolutely unheard of.”

Well, you’re hearing of it again, because last week there was another case of four 10s — and in exactly the same restaurant. And this time all four 10s were for the dishes, two of which were on a €14.90 menú del día. One of the 10s was for the best suprême of salmon I have ever eaten.

The menú del día, which had been reduced from €17.90 o €14.90 as, I suppose, a post-virus way of welcoming back regular customers, was incredible value for money. We shared it and also had two other dishes.

Our menú del día consisted of gyosas, the salmon suprême with stir-fried veggies, a traditional Japanese dessert and a glass of verdejo white wine served in a most elegant slim glass.

The glass of wine is on the menu at €3.90, which brings the overall cost of the menú to €11.90. A tremendous bargain. Indeed, a salmon suprême as good as this at other restaurants (if you could find one as excellent as this) would cost more than the €14.90 price of the menú. I would happily have paid €16.90 just for the salmon. That’s how much of a bargain it was.

What was so good about it? You can tell just by looking at the picture that this is going to be a fine piece of fish. The cooking time has been spot on and you can see how the flesh will flake as soon as it is touched with a fork. That’s exactly what happened — the flesh opened out like the sections of concertina archive.

The flesh had a lovely pinkish sheen and each flake was amazingly whole — but at the same time soft and silky on the palate.

The picture also shows that the skin is nicely charred, so it was crunchy and full of flavour. The waiter said that effect was achieved on the grill but I’m pretty sure they must have used a kitchen blowtorch.

The amount of grill heat needed to get that degree of crunchy scorching on the skin would have left the flesh somewhat dried out —but it was exquisitely succulent.
The salmon was perfect in every way and the stir-fried veggies were beautifully al dente —but not too much so, as frequently happens. It all added up to an instantaneous 10 out of 10. 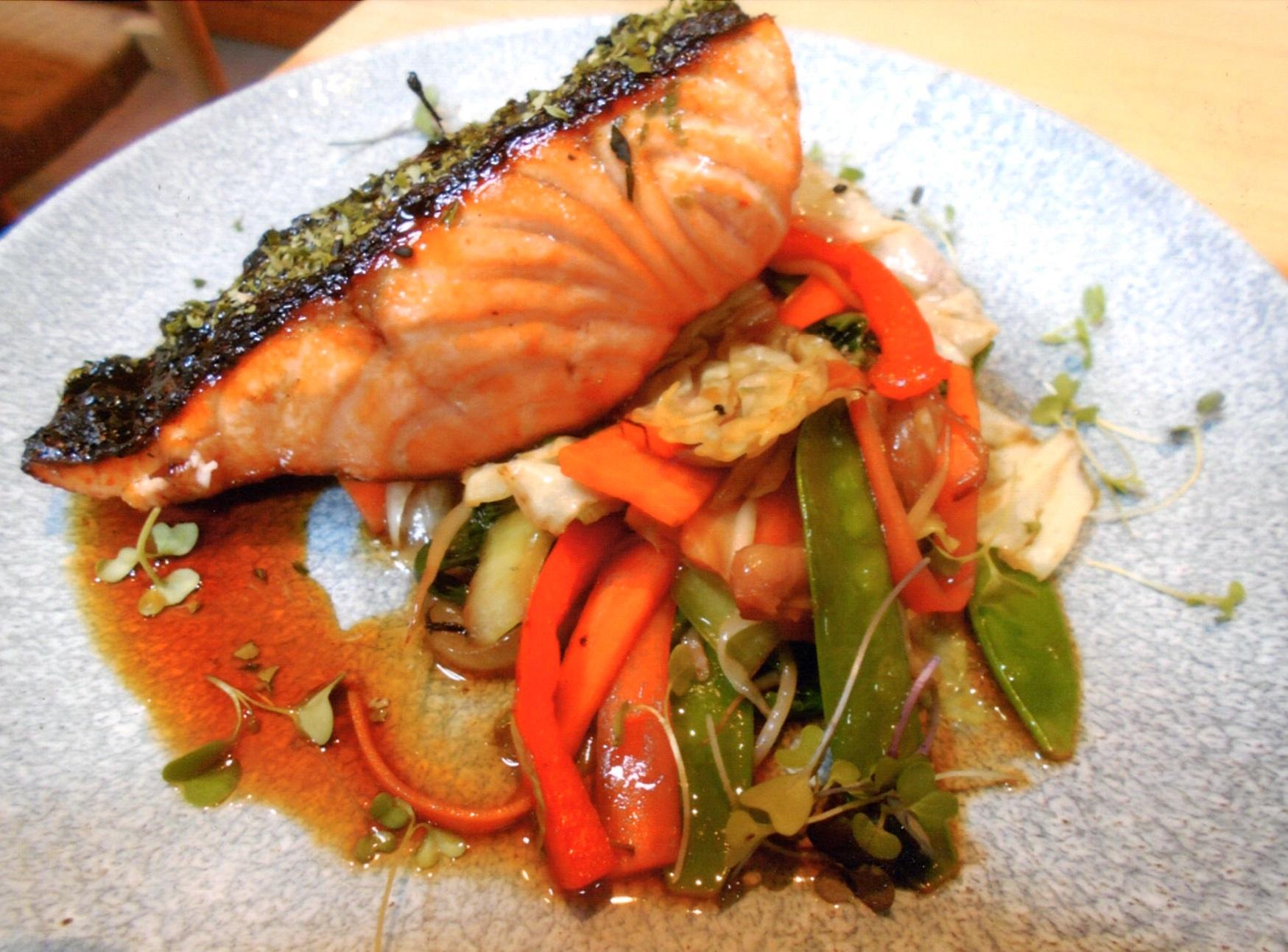 There are few things I like better than finding a really good restaurant where readers can eat very well at reasonable prices. Quinta Avenida fits that bill and on two visits a year apart they have scored eight 10 ratings — seven for dishes and one for the whole dining room staff who worked in beautiful unison last year. I’ll never forget the young waitress who didn’t know the answer to a question and went off and returned with the head cook to explain what I wanted to know. That’s what I call good service. But Quinta Avenida rakes in 10-ratings mainly because the cooks are totally on the ball when preparing a dish. Last year’s gyosas were worth a 10 and the cooks could have rested on their laurels. But this year they’ve produced a different kind of gyosa — and scored another 10-rating. That’s an admirable policy.

Japanese Gastrobar Quinta Avenida, Avda del Compte Sallent 5, Palma (on the corner of Calle San Miguel). Tel:871-043066. Open every day for lunch and dinner. The menú del día costs €14.90. You should make a reservation even on mid-week days.