Sun-dried tomatoes are great on flavour

When early humans started to live in settlements and to establish communities, they immediately came up against two major problems: finding enough food to survive and discovering ways to conserve it when there was a glut.

People in coastal areas were never short of fish and recent anthropological studies suggest those early diets based mainly on what came out of the sea were responsible for the incredible intelligence of early humans. It’s something to think about when deciding on what to make for the children’s lunch.

Those early cooks were quick to realise that salt and vinegar were efficient ways to conserve fish and meats in times of plenty. In areas round the Mediterranean Basin, where inhabitants enjoyed long hours of sunshine during the summer months, it was observed that herbs and fruit left on the branch dried out and were still edible months later — and with a concentrated taste that was very nice.

It was in those places that naturally dried grapes (raisins) were used for adding a touch of sweetness to bread rolls and where fruit such as plums and apricots were left in the sun to lose their moisture and shrivel up for use during the winter when there was a dire shortage of fresh vegetables and fruit.

When Columbus brought tomatoes from the New World in the late 15th century it was known they were one of the belladonna family, the deadly nightshade with a poisonous compound called atropine that is used in medicine as a muscle relaxant but can kill in large doses. That was why those early tomatoes were used as a decorative plant. But by the 18th century, Italians had started to cook with tomatoes…and gave the world a new ingredient we have used on a daily basis ever since.

The Italians cultivated the best cooking tomatoes and turned them into plain sauces that were dried in the sun to produce a concentrated paste that allowed them to make tomato-flavoured dishes until the new crop the following summer.

Most cooks would agree that the best cooking tomato is the San Marzano grown in the Naples area. This is the tomato used in the official recipe for the Neapolitan pizza which was awarded World Heritage status a few years ago. Only once have I seen fresh San Marzanos in Palma, in a tiny up-market shop in Calle Bonaire, off the Avda Jaime III. They were priced at around €8 a kilo — which doesn’t come within my weekly food budget.

However, El Corte Inglés in Avda Jaime III sometimes has canned whole San Marzanos, which look like large plum tomatoes, at around €3.50 for a 425grs can. But they’re not a fixture. Every time I drop in (which is usually every day) I look to see if they have San Marzanos.

When they’re in stock I buy several cans. With one can I can make a plain sauce (just the chopped tomatoes with nothing added except a little salt to taste) that is sufficient for 300grs of long imported pasta.

A delicious and generous portion for two people with good pasta appetites comes in at around €4 — an economical treat even although the canned tomatoes are costing so much more than usual.

The Italians were the first to dry tomatoes in the sun and as it is such an easy and efficient way of preserving them until the next summer’s crop, the custom of sun-dried tomatoes soon spread throughout the Mediterranean.

But when canned tomatoes appeared in the late 19th century, many Mediterranean families stopped doing their own dried tomatoes. But the Italians, who appreciate tomatoes more than any other nation in the world, continued to dry their own tomatoes and to make their own concentrated tomato paste.

These Italian sun-dried tomatoes were exported to the United States for the country’s large population of residents with Italian names and DNA. The trendy cooks in California and New York City, always on the lookout for something different to add to their recipes, eventually cottoned on to sun-dried tomatoes.

As always happens with these culinary innovations, the sun-dried tomatoes trend went to restaurants in London and other big European cities. Quite soon afterwards Mediterranean countries sat up and took notice — and were soon producing sun-dried tomatoes on a commercial scale.

You can now find little jars of Majorcan sun-dried tomatoes in oil even in some neighbourhood grocery shops. I find them rather expensive and have never bought them.
It’s easy-peasy to do sun-dried tomatoes. Ripe but firm plum tomatoes are halved lengthways, sprinkled with a little salt, and placed on a suitable tray, a wicker one being ideal. The tray is placed in the morning sun and until late afternoon. It is taken indoors at night. Three days of morning and afternoon sun should be enough to extract their moisture.

They are then put into wide preserving jars, covered with virgen extra olive oil and left for at least a month before using them. Most people like to add condiments to the jar and you can choose from peppercorns (red, green, black and white), bay leaf, sprigs of fresh thyme, coriander seeds, whole cloves, whole all-spice or a couple of small red or green chillis. 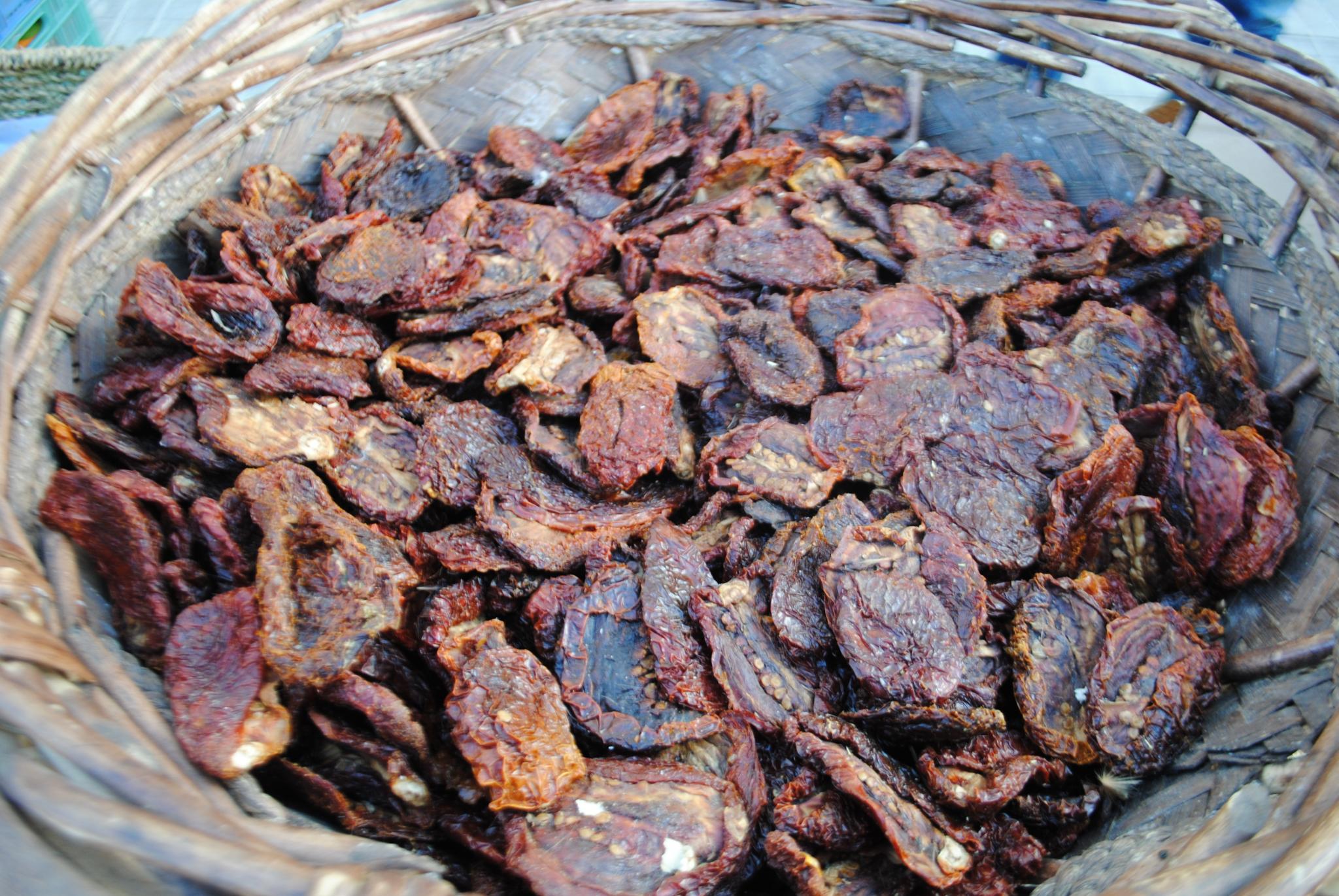 But you don’t have to dry your own tomatoes because they are on sale, loose, at the Mercat d’Olivar and the Santa Catalina market. They cost around €28 a kilo a can be put into the preserving jars immediately.

The truly great thing about sun-dried tomatoes is their super concentrated taste when eaten as they are or cooked. It is essential not to overcook them because some of that strong flavour must be retained so it comes through when we bite into the little pieces in a sauce, salad or a pasta dish.

They can be sliced or chopped and added to soups, stews, risottos and other rice dishes and in any recipes that call for chopped tomatoes. Chopped sun-dried tomatoes added to homemade bread dough are scrummy. But in every case these tomatoes are being used as a condiment rather than a vegetable, so only a small amount is required.