When the weatherman turns the heat up full blast — in Majorca he usually does it every July and August — there’s not much we can do to keep really cool. Cold drinks, like cold showers, are extremely pleasant while we’re having them — but the cooling effect wears off with amazing rapidity.

There is one thing, however, that leaves me absolutely cold — that’s a compliment, not a complaint — and it’s called granizado. It’s similar to granita, the classical Italian water-ice and also to the French sorbet. But the granita and the sorbet are much more solid and are eaten with a spoon.

The Spanish granizado is a concoction of slushy fruity ice which contains quite a lot of liquid — so much that one starts off taking it through a straw before finishing it off with a spoon. Many cafés and bars have granizado in round transparent containers, usually either orange or lemon flavoured, with a revolving electric paddle that stops it from solidifying.

Granizados are usually served in tallish glasses and come with straw and a spoon with a long handle to make it easier to get at the last of the slushy ice.

Another granizado which Spaniards love is made with coffee. It comes in much smaller glasses and is served with a spoon. A good granizado de café is made with strong black coffee and a large glass of it would be much too thirst-provoking.

Granizado really is the best cooler of all. It is colder than ice cream or cold drinks and that means we eat it more slowly and are exposed to its cooling effects for a longer time.

On hot August nights I’ve had granizados on the balcony at three in the morning that have left me feeling pleasantly cold to almost shivery. It’s probably not very good for us, but it’s exhilarating at the time.

Those churning granizados at most cafés and bars are not very good. They’ll cool you down all right but they are not a high quality product. Most of them are made from commercial concentrated juices that may not be very natural.

There are same bars and cafés that serve good granizados, such as Bar Bosch in Plaça Joan Carles I and Can Joan de s’Aigo in Barón de Santa María Sepulchre off Jaime III. But the best way to be sure of getting a really top-class granizado is to make your own. And the really satisfying thing about this little chore is that you can hardly go wrong.

When making ice creams and sorbets we have to be extra careful about stirring the mixture to break down the ice crystals. But with granizados the ice crystals help to produce the slush.

For an orange granizado you will need: 350grs sugar (or to taste), 1 litre of water, half a litre of freshly pressed orange juice (or more).

Bring the sugar and the water to the boil and simmer for five minutes. Let it get cold and stir in the orange juice. Transfer it to a deepish stainless steel or ceramic bowl and put it into the freezer, stirring it from time to time. It is ready to eat when it becomes slushy. If left in the freezer it will become solid. If that happens, transfer it to the fridge until it becomes slushy again. For a lemon granizado use the juice from freshly pressed lemons. You may want to add a little more sugar, but bear in mind that good granizados should be tangy, not cloyingly sweet.

A coffee granizado is made by adding 350grs of sugar to a litre of hot strong black coffee and stirring it until the sugar dissolves. When cold put it into the freezer and treat it like an orange granizado.

Freshly pulped fruit of any kind can be turned into granizados by adding enough water to get the right consistency. Really thick pulps may need extra water — and if they are sweet, a little less sugar.

Sorbets are similar to granizados but they are more refined and, therefore, a little more laborious. Sorbets, like so many other edibles, had their origin in China and at first were simply snow mixed with fruit and honey. From China they found their way to India, then Persia and on to Egypt. They were known to the ancient Greeks and Romans and the Arabs introduced them to Europe, mainly through Spain and Sicily.

Until the First World War, when appetites and menus were gargantuan, the sorbet was served in the middle of a meal. It came after the hors d’oeuvres, soups, fish and other dishes and was meant to clear the palate before going to to the roast meats.

However, if you look at old menus you never see the sorbet listed. It was considered such a natural part of the meal — like bread or jugs of water — that it never got a special mention. So in the 1970s, when the French nouvelle cuisine chefs started to serve sorbets in the middle of their meals, there was nothing new about it.

Indeed, the more you look into nouvelle cuisine, the more you realise what a misnomer it was — those chefs weren’t doing anything new. They simply took up techniques used in the past and copied those that were being used in other countries. Their minimalist presentation of dishes, for instance, was lifted from traditional Japanese practice.

Another of the beauties of sorbets is that they can be made from anything you have on hand. Sorbets must be smooth and you achieve this by whisking the mixture before it sets, thus breaking down the ice crystals. Some people like to whisk an egg white into their sorbet, others don’t. Try it both ways and see which you prefer.

Most sorbets start out as a highly-flavoured syrups, usually containing the juice of the fruit you are using. But some are made with the pulp of the fruit, as in melon sorbet. Once you have this mixture, it is cooled and then frozen in shallow containers. At the same time you put a bowl and a whisk into the freezer. 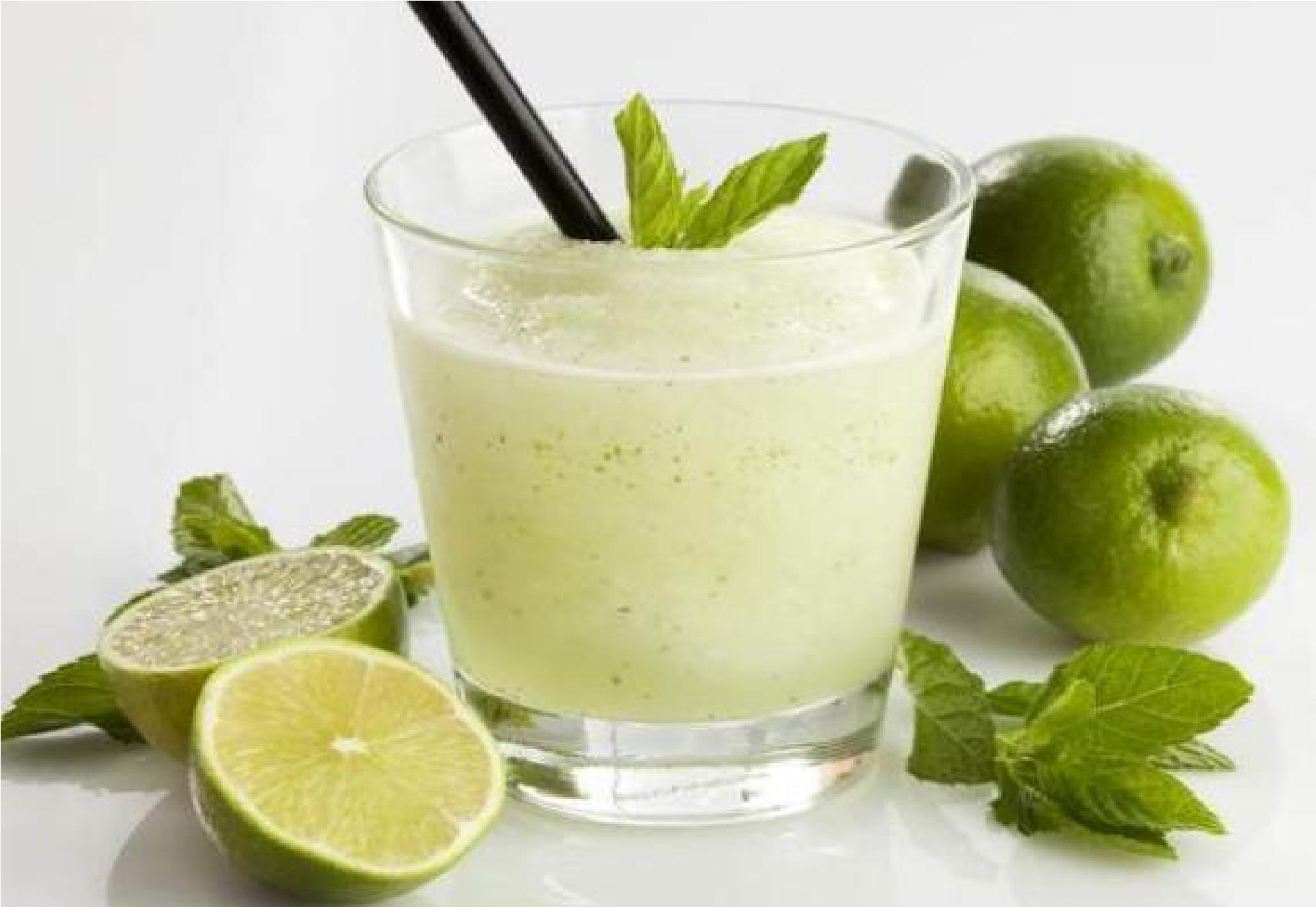 When the mixture is half frozen, transfer it to the iced bowl and whisk it well and quickly. If you are using a beaten egg white, add it as this stage. Return the bowl to the freezer and repeat this process every 15 minutes until the sorbet is smooth.

You can serve your sorbet as the nouvelle cuisine chefs did by taking it out in teaspoonfuls and arranging each one on a plate as if it were a leaf. You can even make stems with melted chocolate or concentrated fruit juices.

I always found that more than a little chi-chi and think a sorbet is best when it comes in a tallish stemmed glass (chilled in the freezer) with possibly a sliver of the fruit or a sprig of mint being used as the only decoration.

You can make a watermelon sorbet by dicing enough of the fruit to make five well-filled breakfast cups, discarding the seeds. Blitz in a blender in two batches and pour the puréed fruit into a large bowl. Add half a breakfast cup of granulated sugar, three tablespoons of kirsch or a sweet liqueur if you have it and two tablespoons of lemon juice. Stir until the sugar dissolves.

Put the bowl in the freezer, whisking it every half hour until is is just solid. Serve in stemmed glasses garnished with a tiny sprig of fresh mint.

A mint sorbet is most refreshing and worth considering. You will need: 1 litre of water, 400grs granulated sugar, a whole bunch of mint (available at the Mercat d’Olivar and some supermarkets) and one lemon.

Add the water and sugar to a saucepan and bring to the boil. Pluck the leaves of mint from their stems, keeping back a good handful of the youngest ones, and add them to the water-sugar mixture and simmer for 10 minutes. Take off the heat and leave the covered saucepan for 12 hours.

Strain the liquid and add the juice of the lemon. Chop the young mint leaves as finely as possible and stir them into saucepan mixture. Then continue as in the basic recipe.

The summer months are also the best time of the year for eating ice cream and there are now so many sales outlets in the centre of Palma I wonder how they can all make a living. Some of them open and close quickly, but others seem to hang on year after year. However, I don’t think anyone is becoming rich by selling ice cream in the centre of Palma except, perhaps, some wholesaler who supplies all of these outlets — they all seem to be selling the same dozen or more ice creams.

It wasn’t like that in the old days when there were barely half a dozen cafeterias selling ice cream Palma. They were called ‘granjas’, not cafeterias. They were old-fashioned places that specialised in hot chocolate, ensaimadas and other pastries — and ice cream. But they didn’t have dozen or more varieties: it was mainly almond ice cream (a favourite with Majorcans), chocolate and vanilla.

There was the Granja Royal which was the one I liked best mainly because it was at the start of Calle San Felio off the Born and just down from the old Bulletin offices. It was my local when I wanted a hot chocolate, a really good café con leche, an almond ice cream — or to watch the first or second half of a Real Madrid European Cup match on television.

There was a place called Granja Reus that was also very central — it occupied part of the ground floor of what is now C&A. This was Robert Graves’s port of call on his weekly visits to Palma and he was always sure of finding a pile of letters and parcels friends had left for him. It was easier to drop them off at Granja Reus than to post them to him in Deyà.
The only granja-like establishment in the centre of Palma is Can Joan de s’Aigo in Calle Barón de Santa María Sepulchre off Avenida Jaime III at El Corte Inglés. It is extremely popular and at peak hours on fiesta days and Sundays (usually around midday and 6-7pm) you’ll find a 20-long queue of people waiting for a table. Everything they sell is home-made, including the ensaimadas and their superb almond ice cream.

I don’t know anyone who makes ice cream at home these days — including a couple of friends who actually have pukkah electrical machines. So I’m not giving any recipes. But you can make ice cream as easily as doing a sorbet — it just needs a little more care and attention.