Splendid samosas were the best ever

In all my years of eating in restaurants there has been only one dish whose quality always rates very good to perfect and from time to time a particular version has been the best I’ve ever had.

That dish is the samosa, the triangular deep-fried or baked savoury pastry which I order every time I go to an Indian restaurant. The samosa is a rarity in that I’ve never had a bad one. 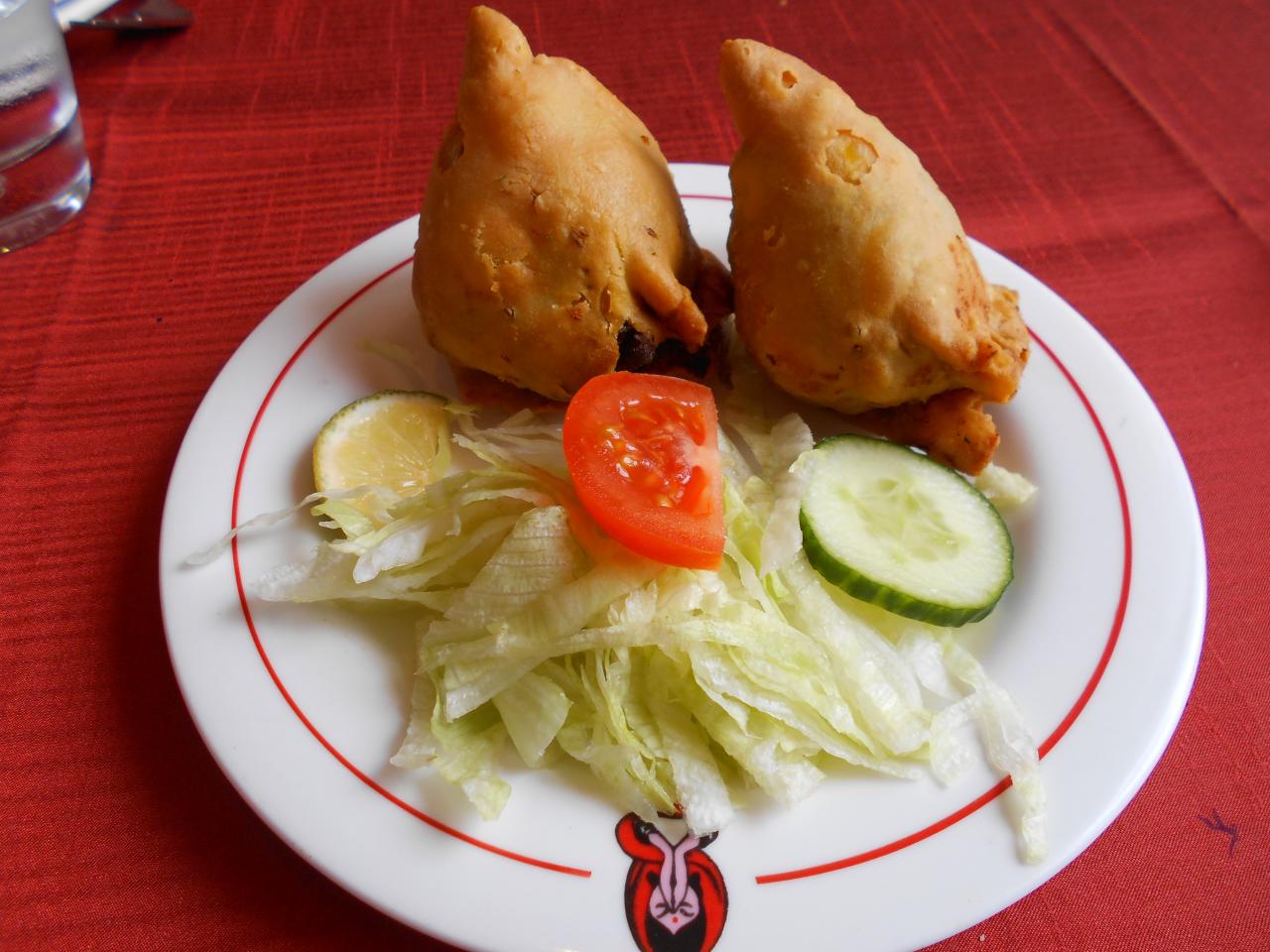 At one family-run place a few years ago the dishes simply weren’t up to the usual Indian high standard and it was a disappointing meal — except for the samosas. They got a 10-rating.

Indian cooks really know their samosas. And no one of my acquaintance has made them better than the cook at Namaste — his were the best ever.

As soon as the samosas were put on the table I could see the pastry was going to be extra-thin and crisp. As with all pies (a samosa is a mini pie) a good pastry is half the battle, so these samosas were off to a fine start.

When I sliced a samosa down the middle to get a picture of the filling I knew for sure these samosas were going to be very special. The first cut into the pastry released a silent explosion of aromas and the air round the table filled with a fragrant mix of Indian spices.

But the proof of the samosa (as with the pudding) is in the eating — and the first bite was enough to tell me that this was a 10-out-of-10 samosa. The pastry was as light and brittle as filo, an absolute joy.

The veggie filling was exquisite. Those aromas that had earlier activated the olfactory nerves, now overran the tastebuds — and that was added bliss.
Vegetable fillings for baked or deep-fried pastries are frequently an unidentifiable mish-mash of potatoes, turnips, carrots and other root veggies. But in this one all the veggies were visible to the eyes and the palate.

I can’t show you the filling because the pastry was too brittle for cutting and it didn’t slice into two neat photogenic halves. However, I can assure you it looked good and tasted even better — and helped to make this samosa the best I’ve ever had.
And that’s saying something because I’ve eaten some incredibly splendid samosas at Indian restaurants, several of which got a 10-rating.

Western cooks aren’t so hot at doing samosas, partly because getting them right isn’t as easy as it looks: pastry and filling have to be complementary and that calls for a bit of expertise.

Vegetarian cooks who want to make better samosas should visit Indian restaurants and analyse the different versions they come across. And they should start at Namaste — that’s where the best ones are. 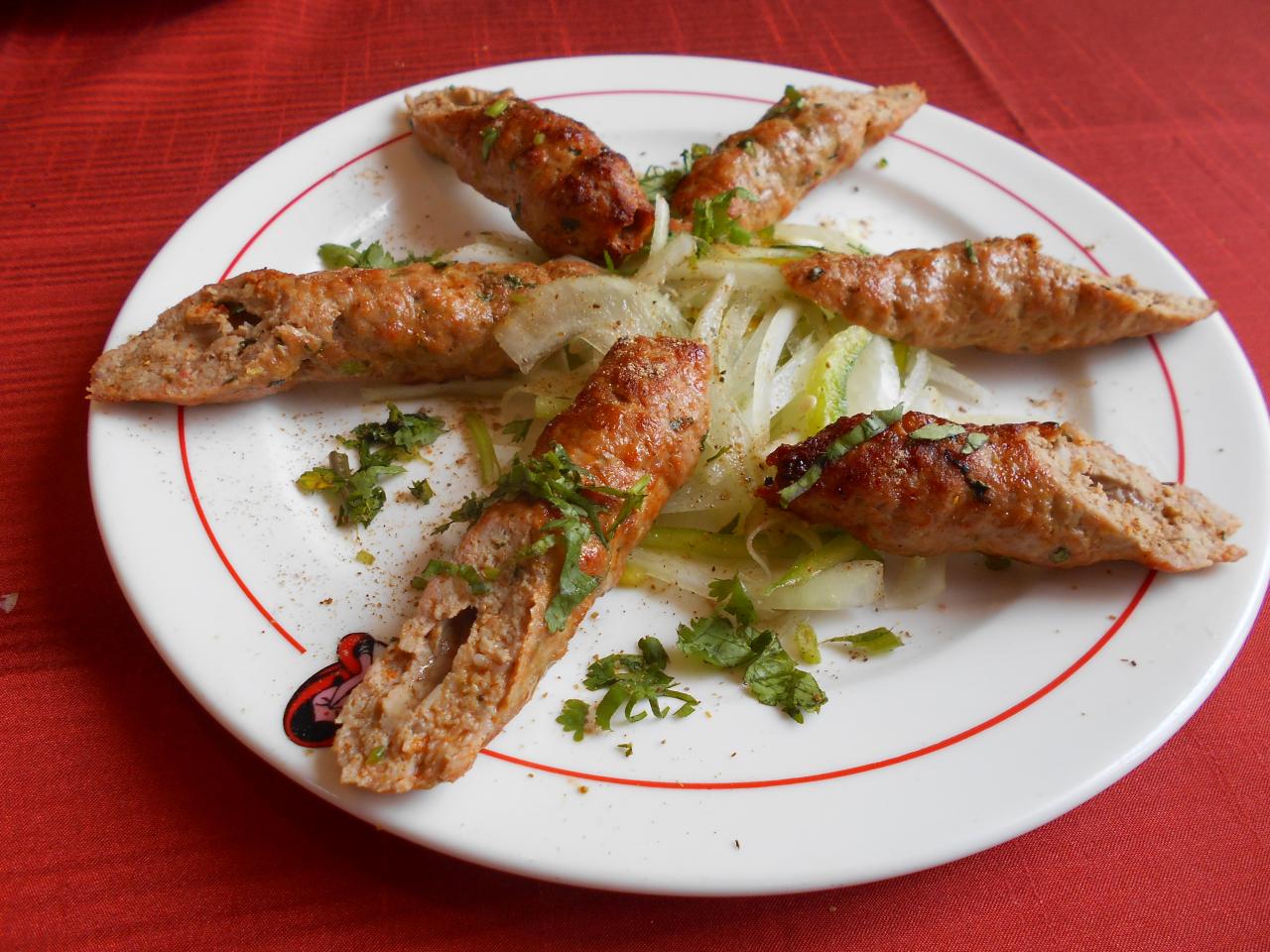 Two of my favourite words in an eating out context are ‘subtle’ and ‘generous’: if a dish is subtle in flavours and the portion generous, then we’re eating well. Those were the words we were using at Namaste minutes after the lamb sheekh kebab was on the table.

The factor that = good cooking

The minced lamb is pressed and shaped on skewers and then grilled. As the Indians traditionally eat with their fingers, the lamb kebab is pulled off the skewer, halved, and presented as in the picture.

The lamb was minced finely but wasn’t pounded to a paste, so it still had texture. But best of all was the subtle spicing: there were flavours in there but you had to concentrate as you chewed in order to find them. That is good judicious use of spices.

The spicing of the chicken dish was also beautifully controlled. The overall effect was a lovely taste, but if you were interested in what was giving out those flavours, you had to run through your memory bank of aromas and tastes. It’s good exercise for the brain as well as the palate.

Subtlety is the name of the game at Namaste and it even extends to the basmati rice. The jeera rice is seasoned with cumin, jeera being the Hindi word for that spice. But yet again you had to search for the cumin taste. The basmati, as always in Indian restaurants, was nicely cooked, each grain separate. 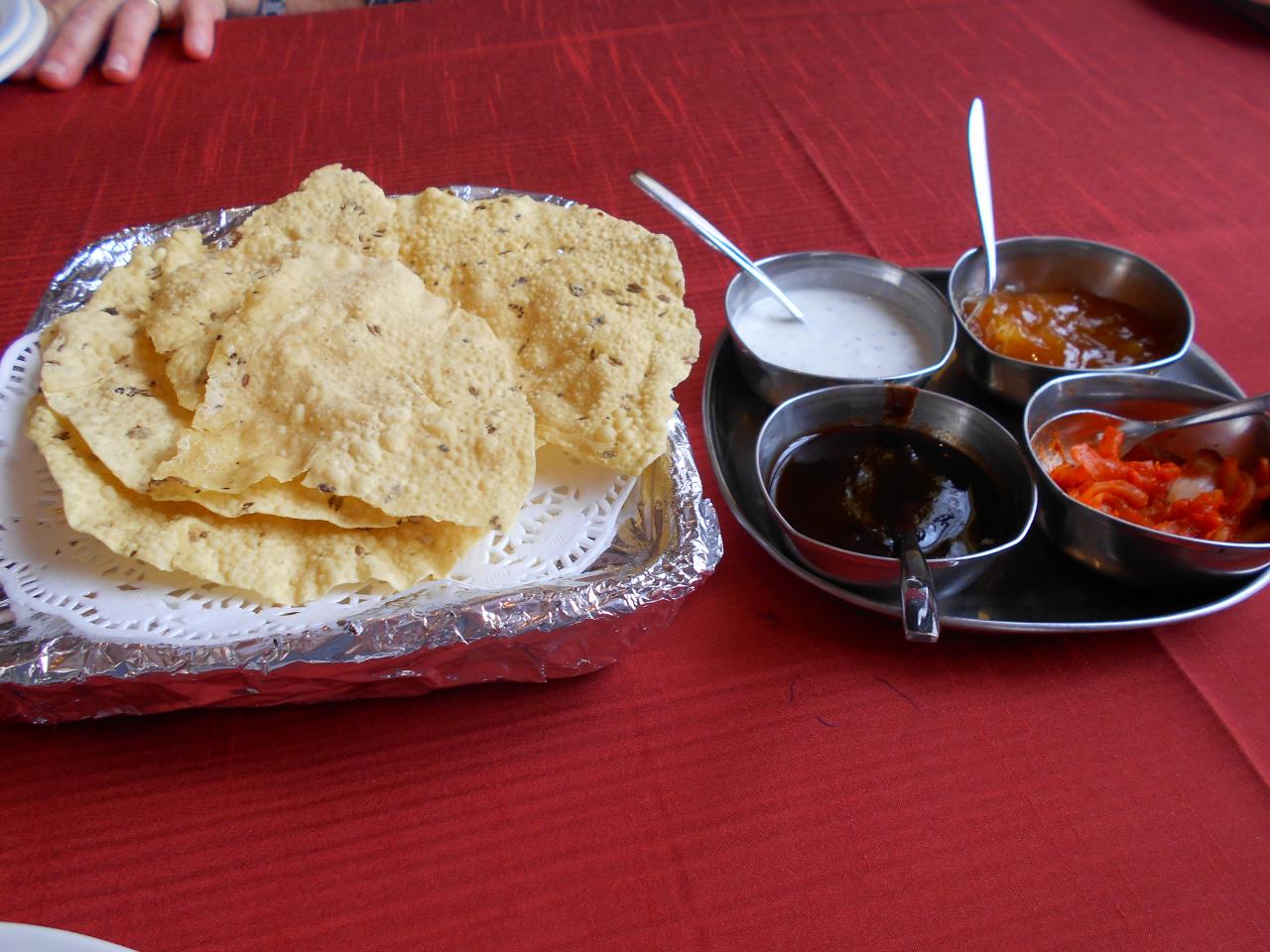 My only complaint about the meal was the lime pickle: the rind was soft and the characteristic taste taste had almost vanished. It was past its best.

The ‘namaskar’ is the traditional Indian greeting which is made by putting the palms together as if in prayer and bringing them before the face or chest, then bowing and saying “Namaste.” The word comes from the Sanskrit ‘namas’ (bowing) and ‘te’ (to you).
It’s a lovely greeting and even when made to complete strangers on a train or a plane, it always receives the same bowing action and the namaste word in return. The Indians have such delightful good manners. 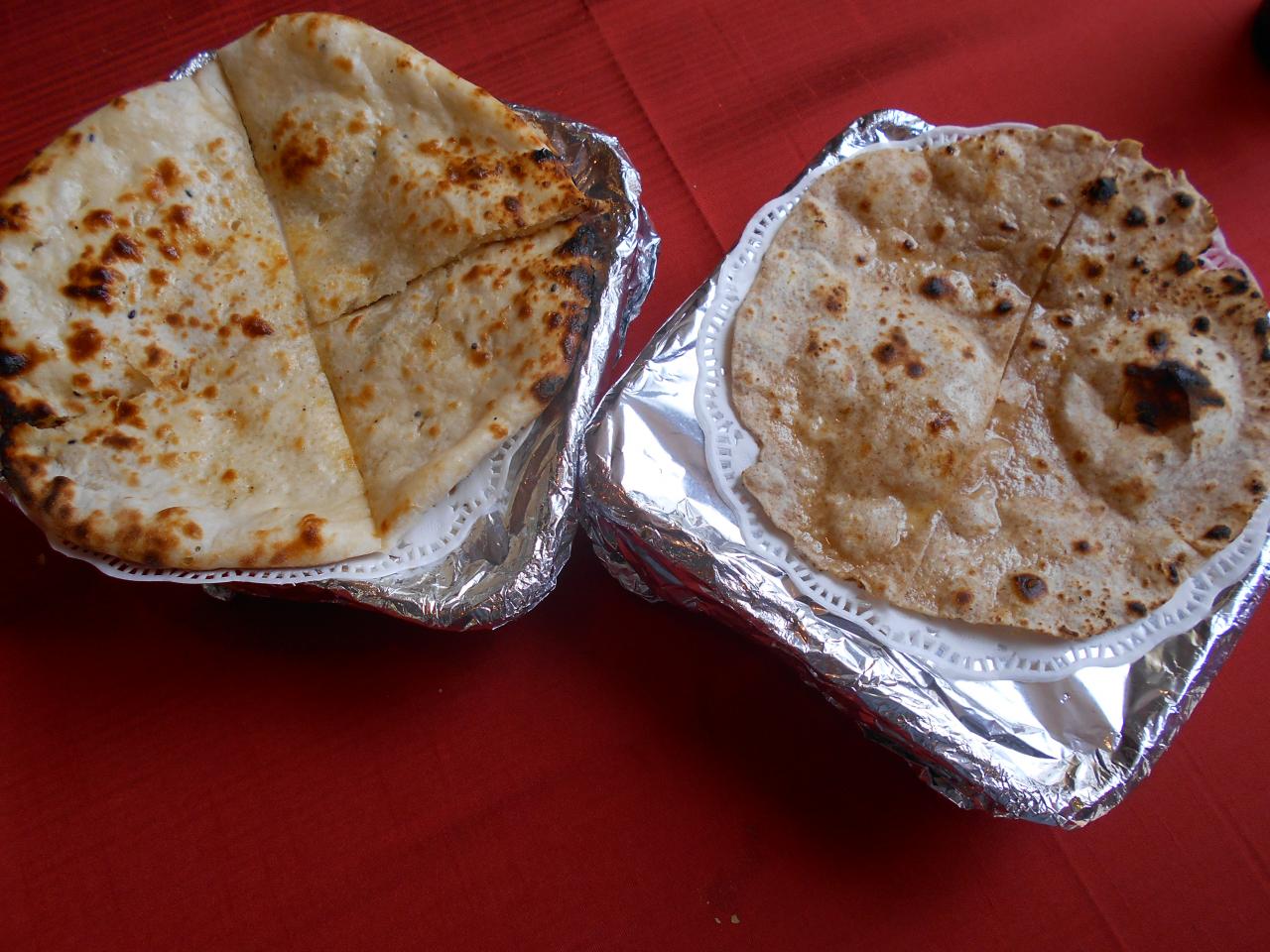 It’s always very nice when a starter is worth a 10 and also turns out to be the best of its kind we’ve ever had — it gets the meal off to such a magnificent start. The samosas were perfect for three main reasons: the brittle crunchy pastry, the incredible blast of aromas when one was cut open and a mixed vegetable filling that was exquisitely seasoned with the fragrance of India’s warm spices. I can’t imagine how another samosa could be anything like as splendid as this.

I’ve said that before and even better ones have come along…we’ll see what the future brings. The subtle spicing on the sheekh kebab was delicious and the portion was most generous. The spicy chicken in a silken sauce was somewhat overcooked but it was enjoyable and ideal for the cumin-flavoured basmati rice. The chapati and the peshawari naan were most successful.

On all other days the opening time is 12.30pm, ideal for those who want an early lunch.