His grandfather had opened a restaurant in 1918 in Abruzzi, the harsh and isolated region a little more than halfway down the leg of Italy, on the heel side.

Michele’s way of saluting his grandfather’s initiative in starting a restaurant in the upheaval and turmoil that followed the end of the First World War, was to add another restaurant to the other two he has on the first block of Calle Fábrica in Santa Catalina — La Bottega di Michele (the flagship restaurant) and Bianco e Rosso.

His son Emanuel, who at that time was running Bianco e Rosso, had a big say in the setting up and the design of the new place. Emanuel wanted to have an upmarket wine list with some expensive bottles, including one at more than €800.

I don’t think Michele was very keen on that idea, but Emanuel got his A-list wines and because these fine bottles were going to be very much in the front line, they decided to call the restaurant Enoteca, a Spanish neologism that means ‘stock or range of wines’.

The 1918 was added as a tribute to Michele’s grandfather and his opening of the family’s first restaurant in 1918.

Right from the start Emanuel aimed at giving Enoteca a touch of class.

It wasn’t just those top wines at top prices, it was also high quality everywhere, a characteristic he has picked up from his father: when Michele’s shopping for the restaurant he buys nothing but the best. That’s one of the reasons he has so many regular customers.

Emanuel’s quest for quality can be seen before any of the dishes arrive — and even before you sit down, because there’s class right there in the cutlery. 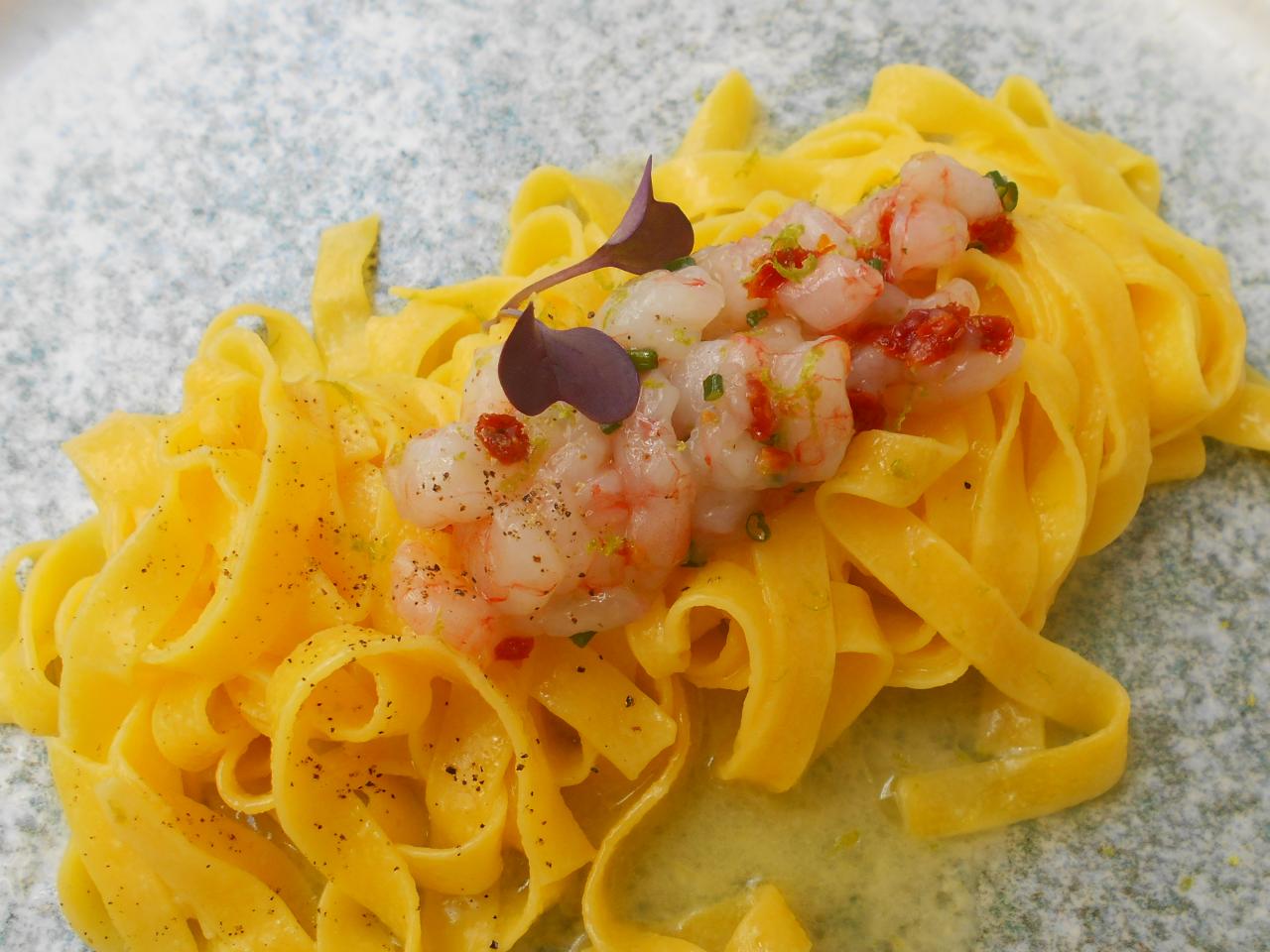 It’s well made, attractive, feels good in your hand and, most important of all, does its job beautifully.

The dessertspoon that came with the thin tatin apple tart was so well designed (and the tart so nicely baked) I didn’t need a knife and fork to tackle the pastry — as I usually do at other restaurants.

The glassware, which is always an important item in restaurants (and in many places often neglected), was of a superior kind and added a nice touch of sophistication.

The caña glass was especially likeable: thistle-shaped and with a bulging belly. It helped to make that caña very special. And at €2.50 the price was right — for that kind of restaurant in Santa Catalina.

Emanuel was born in Abruzzi where there is a tradition of serving food in ceramic bowls.

As a child he would have used these bowls with their colourful patterns, and he obviously remembers them: he uses a nice collection of ceramic plates and serving dishes. And that adds another touch of class to Enoteca.

Emanuel is following in his father’s footsteps in many ways and has learned much from him, especially in Michele’s ‘quality first’ ethic.

And he has also inherited Michele’s good looks. However, he’ll have to celebrate a few more birthdays before he’s as handsome as his father.

When I was about 20 I had my first fritto misto in a Soho restaurant — and it immediately became one my favourite dishes. Since then I order it every time I see in on a menu, which isn’t all that often because most Italian restaurants don’t do it.

A fritto misto can have three to seven kinds of meat and vegetables dipped in batter or breadcrumbs and deep-fried. In Palma I have only once eaten a fritto misto.

The others were fritto misto di mare — the same thing but made only with pieces of fish and shellfish.

Either version of this dish is a good one to order in real Italian restaurants because Italian cooks are among the world’s best at deep-frying battered, floured or breadcrumbed food. 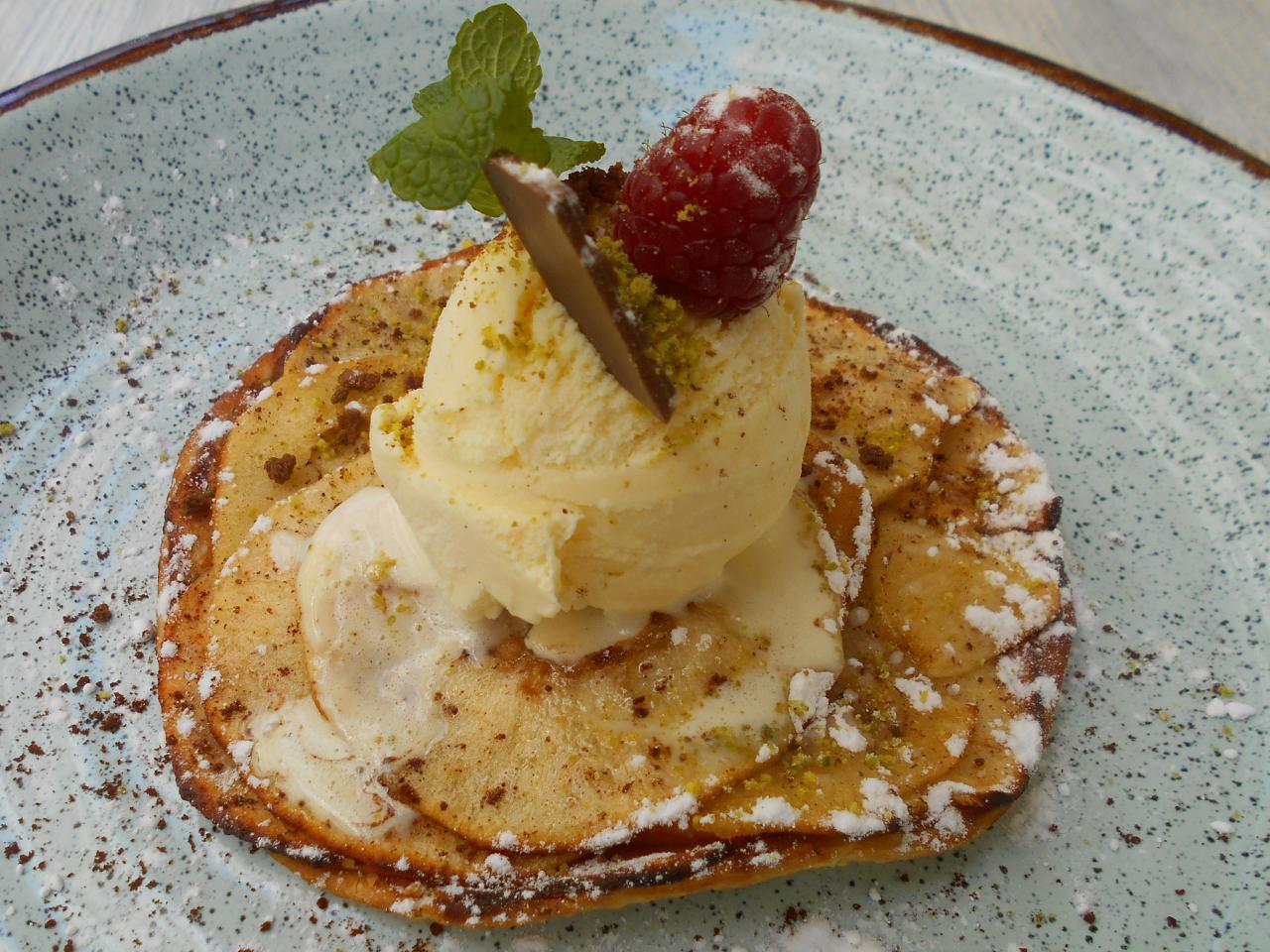 They’re up at the top along with the Spanish (for their Andalusian tapas), the Japanese (tempura), the Chinese (batter-fried seafood) and also those British friers who do an excellent job of fish and chips — a really good chippie batter is a many splendoured thing.

The fritto misto di mare at Enoteca got off to a very good start because it came with a very nice mix of seafood: boquerones (fresh anchovies), rings of squid, squid tentacles, small gambas, skate and langostinos.

This was superior finger food and I started with the boquerones and good-sized langostinos, then came across some tiny squid tentacles and further on squid rings.

There were a couple of smallish gambas complete with head and shell, so crisply fried I could crunch everything between my teeth.

And I was delighted and surprised to find a small section of skate wing and also a thumb-size piece of skate flesh, so soft and juicy.

Seeing skate is always a surprise because so few restaurant cooks use it. Every item was nicely fried and there wasn’t a trace of oil. It was worth a 10 and was also the best fritto misto di mare I’ve ever had. 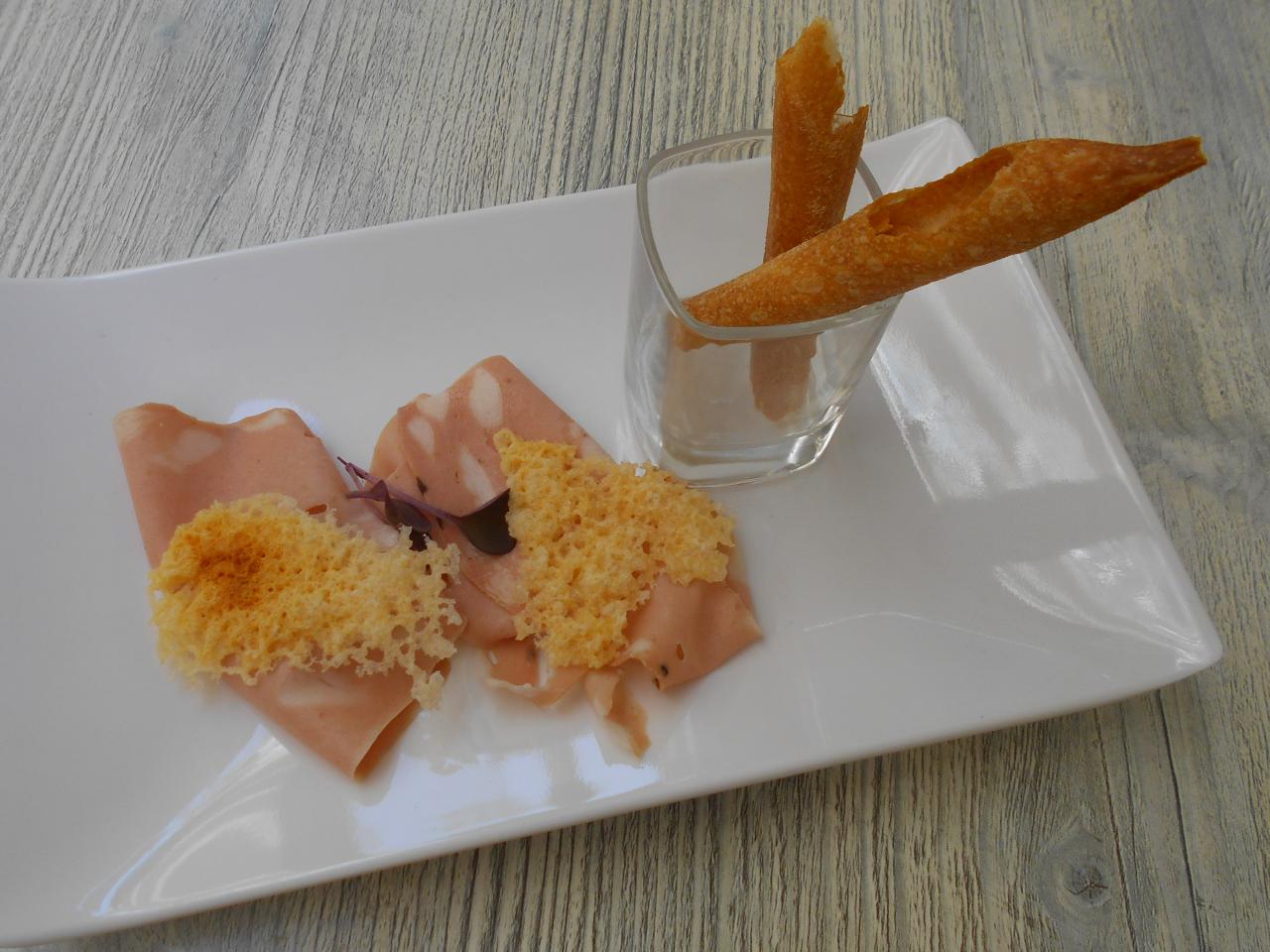 A fettuccine dish was also a surprise: lovely butter-dressed fresh fettuccine with a citric flavour well in the background and, arranged neatly along the top, chopped raw gambas from Sóller. Absolutely delish.

A tarte tatin done with apples was among the best I’ve had. A Becos Ribera del Duero 2019 red oaked for six months was incredibly good and cost only €3.80 per glass. Don’t miss it.

Since Enoteca 1918 opened, Emanuel has been juggling with different concepts and ways of running a restaurant.

I think he has now found the road he wants to take: upmarket and with bags of sophistication. That certainly is what he is offering — and at prices that make Enoteca a very good buy.

The fritto misto di mare was absolutely splendid and worth a 10 — and was the best I have ever had. The fettuccine with red gamba tartar was a lovely surprise, the gambas as fresh as if they were plucked from the sea only a few minutes before. 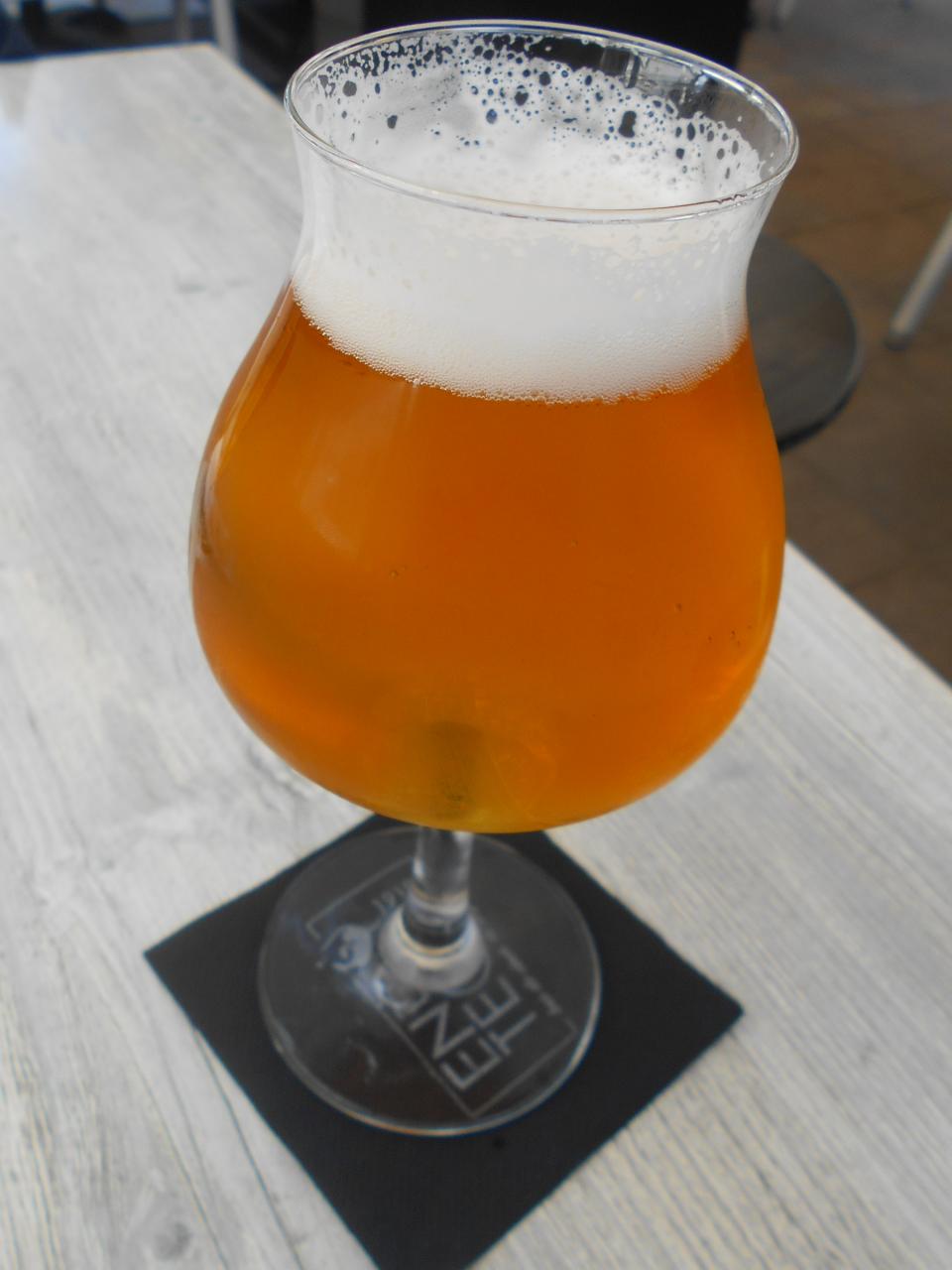 There was just one little incongruity: paper napkins. They were high quality, but they didn’t fit in with the fine glassware, attractive cutlery and stylish cooking.

Most diners wouldn’t notice them. But a Michelin inspector would — and it could mean the difference between being in the guide and being left out.

Enoteca 1918, Calle Fábrica 3, Santa Catalina, Palma. TeL:871:531372. At the moment there is only a smallish dining space on the pavement, so reservations are an absolute must.