The steak pie was made and eaten with Guinness. | Andrew Valente

The old Michelin guides were originally published to help French motorists find competent garage service. Good places to eat were at first a bit of a sideline: if a highly recommendable restaurant was off the quickest route between two towns, it was marked ‘vaut le detour’ — worth the detour.

The Nostalgia bar and bistro in Puerto Pollensa will never make the Michelin guide, but I can assure you the tempura langostinos, fish and chips, plus the steak and mushroom pie are worth the trip from Palma — or wherever you happen to be.

Before leaving Palma for Puerto Pollensa (a major expedition for me because I seldom venture outside Palma’s city limits) I knew that Colin Sweeney and his wife Michaela had already made a bit of a name for themselves in the trade.

They’ve had pubs and restaurants in London, Benidorm and other places. And it was while in London at the Adam’s Arms that Michaela’s steak and mushroom pie won the Pure Genius Pub Food Award, a nationwide contest organised by Guinness. 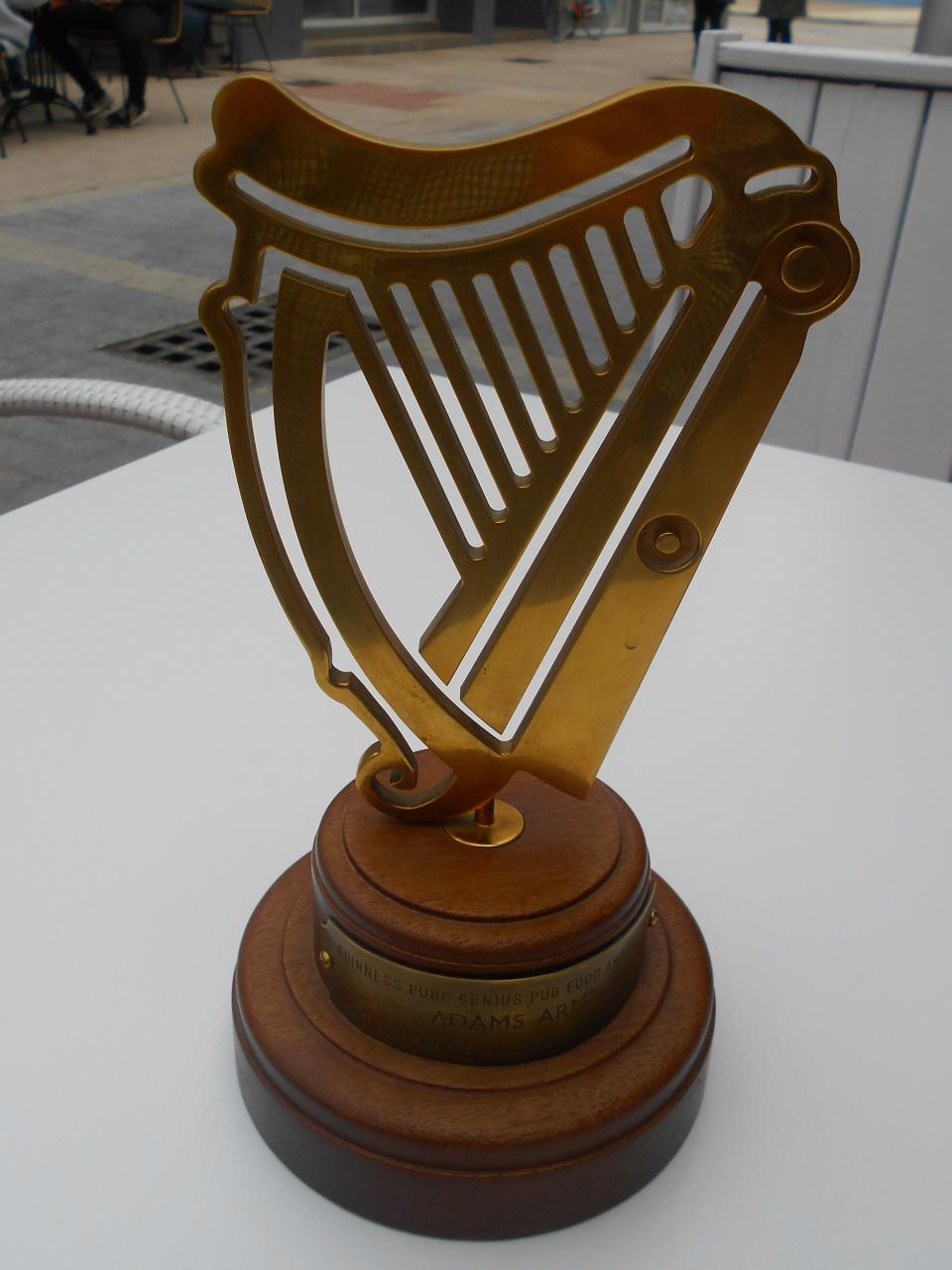 And the recipe which beat 750 other participants in that 1993 contest is the one she uses at Nostalgia —made with Guinness, of course, and with a little pastry shamrock decorating the surface of the pie.

Michaela makes a generous and very neat individual pie with the filling encased in a pastry box. But I made the mistake of asking her to serve the pie in half portions by taking off the lid and cutting it in two.

She did that but it meant we missed out on the main part of the pastry box, the inside of which would have been deliciously moistened with the filling gravy.

The pastry box lid was light and flaky but, of course, there wasn’t much of it, so I don’t feel competent to give a full scale opinion of the pastry.

The filling was a different matter: there was plenty of it and it had the lovely rich taste of the traditional homemade steak pie, and that’s something I haven’t experienced for a long time.

I shall return and have another pie, but this time cut down the middle so we can have more of what is obviously a lovely pastry.

We shared a jumbo version of the fish and chips (they have a small one at €6.95) and it was most successful, served with scrummy chips, tartare sauce and mushy peas with the traditional texture and taste. 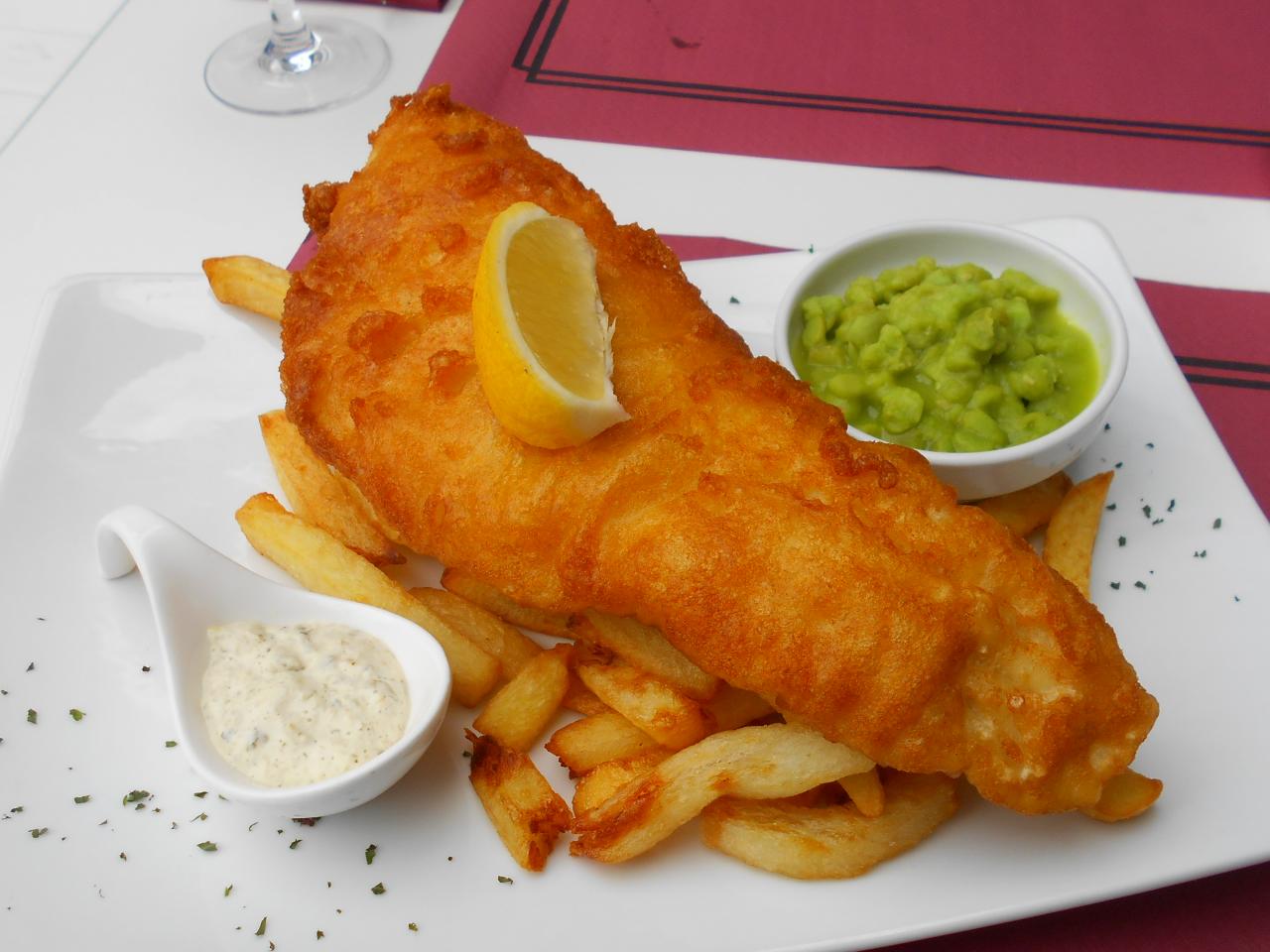 They do a rhubarb crumble and I never say no to any kind of crumble, no matter how much I’ve eaten for starters and mains.

They serve it with ice cream or custard and we chose ice cream. But Michaela sent out a jug of custard as well, so we could try it. It was a beauty: thick and very smooth and not too sweet.

However, I have a bit of a grumble about this crumble. I am a purist in these matters: my crumbles can be made with any kind of fruit, but there must be at least a half-inch layer of crumble — otherwise it’s not a true crumble. This one came with a mere sprinkling of crumbly bits. 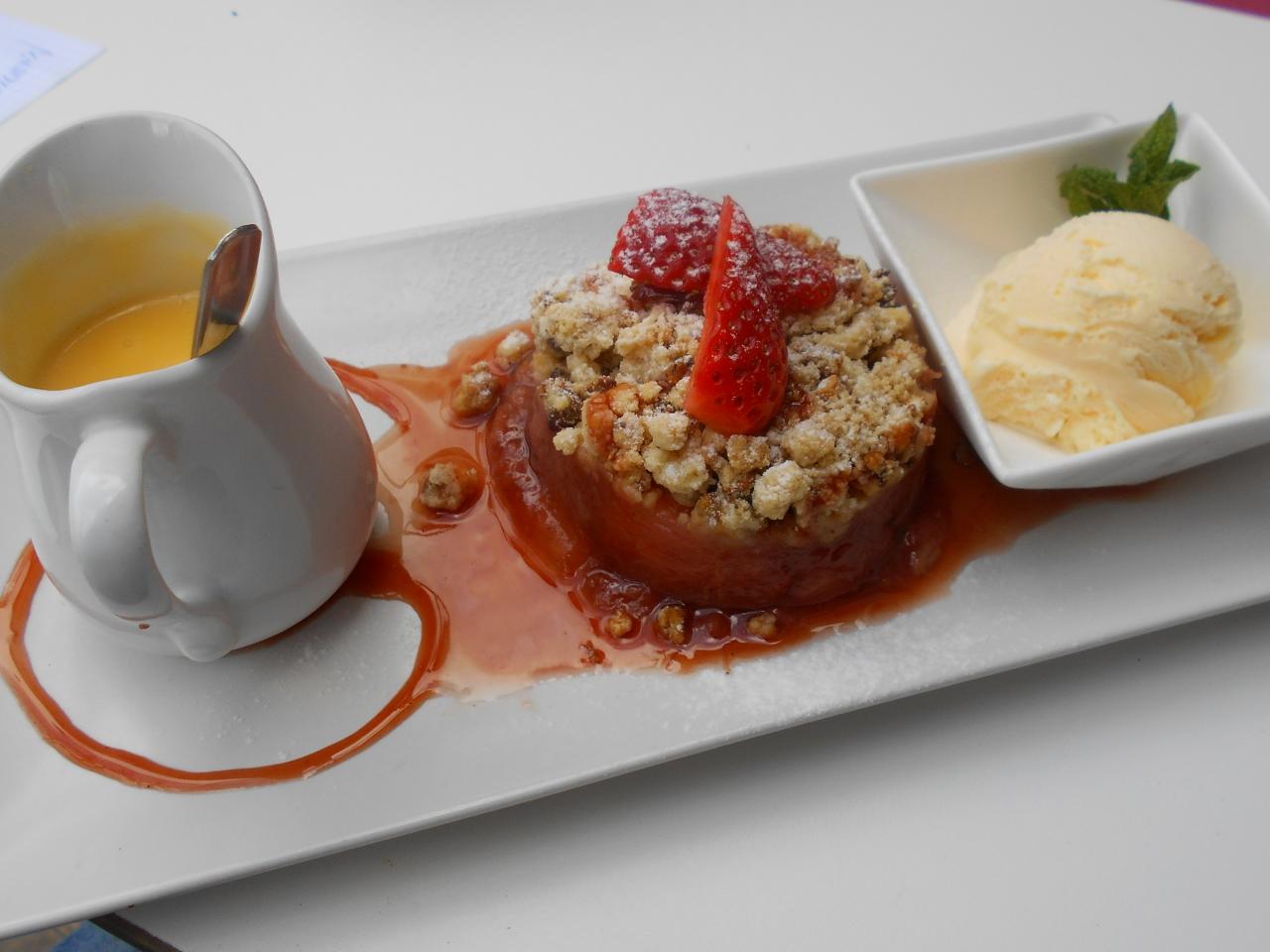 But I’m not complaining too much. We ate really well and we also met a splendid Yorkshire lass called Alison and her dog, Stewart, who loves Quely biscuits soaked in steak pie gravy (so do I).

Alison showed us some pictures of the individual Yorkshire puddings she makes. They were beautifully shaped and bigger and deeper than usual…all the better to hold some delish roasting pan gravy. Probably another of Stewart’s favourite nibbles.

Tempura langostinos were worth 10-rating

When I went to the Nostalgia in Puerto Pollensa I was pretty sure I’d be eating a very good version of fish and chips as well as an excellent steak and mushroom pie.
I didn’t expect to see langostinos in tempura batter on the menu but I ordered them in case I was going to be short of another picture for this week’s review. 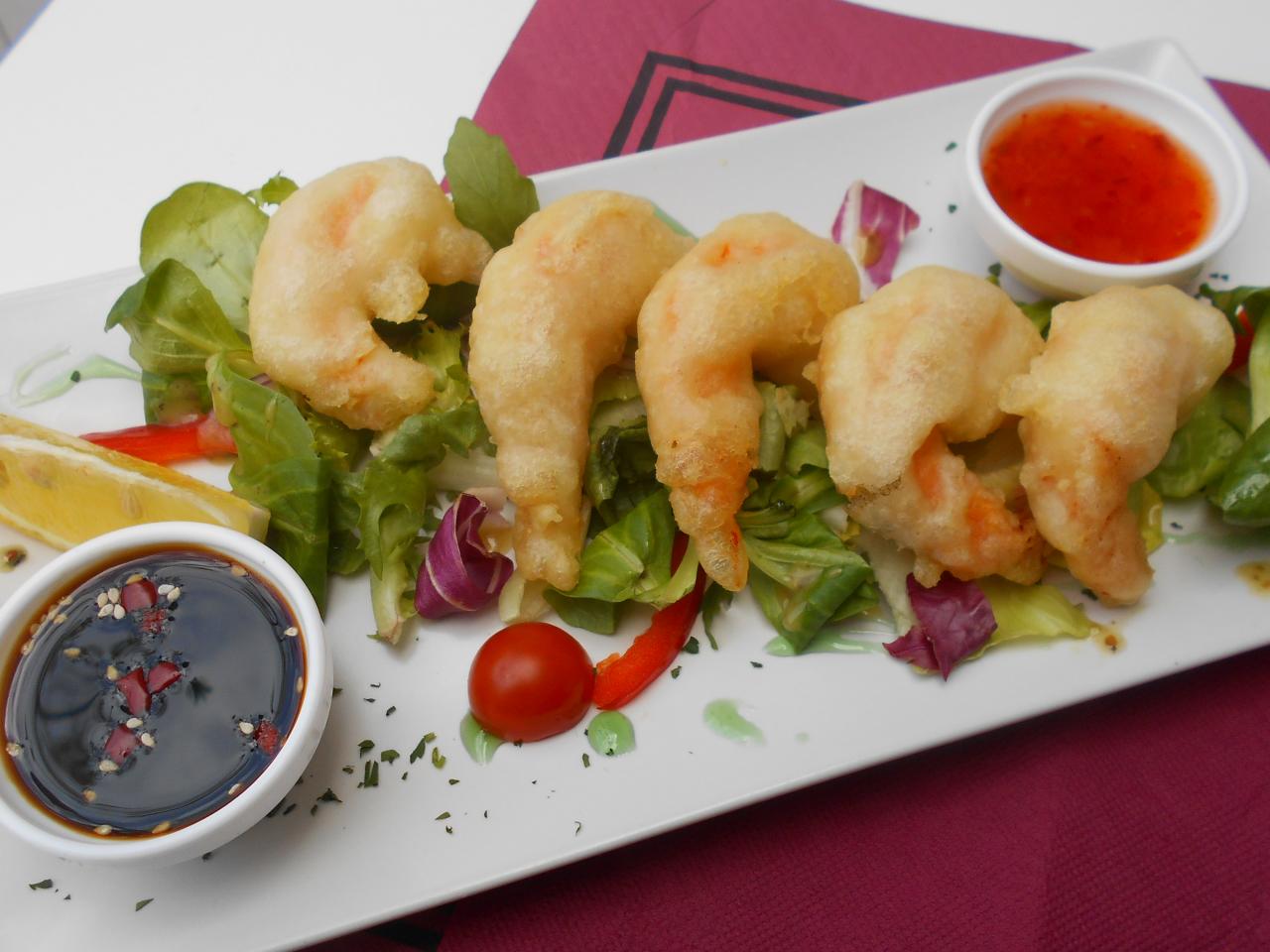 It turned out other pictures were available and I didn’t actually need the langostinos shot, but I was delighted to have ordered them because they were the best tempura langostinos I’ve ever eaten… and that includes some done byJapanese tempura experts.
Shellfish of all kinds are treacherous items because no matter how you cook them, there is a danger they will be overdone — and that means dried out and tasteless.

Seafoods out of their shells are notoriously tricky because they have no fat to lubricate them, so they must be cooked at a high temperature and for a very short time.
One of the reasons we batter-fry fish and other seafood is that the batter gives essential protection from the high temperature — but if it is too high or goes on for too long, then the heat gets in and dries out the fishy flesh.

That didn’t happen with Michaela’s tempura langostinos even although the batter was an especially thin and light one — because she was experienced enough to keep them in the oil for that essential extremely short time.
The result was that an excess of heat didn’t get to the very delicate langostino flesh and it remained juicy and retained its scrummy flavour.

It was the texture, more than anything else, that made these langostinos unique: it had that crisp underdone touch that is the hallmark of perfect batter-fried langostinos and an impeccable degree of juiciness.

They came on an attractive arrangement of crisp salad greens and with two dips which I tried on their own. But I didn’t let even a molecule of the dips get near the langostinos.
When langostinos are as memorable as this, I don’t need anything in the way of herbs, spices or dips to enhance them. They are ideal on their own.

The meal at Nostalgia was simply that — nostalgic. And very nice it was, too. Eating the fish and chips was like being back in England: a lovely piece of cod with a traditional English crispy batter — plus conversation in the background that could have come straight out of a Coronation Street episode.

And the mushy peas had a classic mushy peas taste — which is sometimes lacking in other fish and chips places on the island. I unfortunately messed up the steak and mushroom pie by having it served in two portions, which means we lost most of the pastry. That won’t happen again. Next time (and there will be a next time) I’ll order a whole portion and will really get to know Michaela’s award-winning pie.

The tempura langostinos were incredibly good in every way, but especially in the juicy terse flesh of the langostinos. This was tour de force cooking for which 10-out-of-10 isn’t a good enough score.

Bar-Bistro Nostalgia, Calle Ecónomo Torres 19, Puerto Pollensa. Tel:664-135069. Check for opening times. Although they have a good amount of terrace space, it’s always best to reserve a table — especially if you live some distance away.