If you’ve ever eaten at the restaurant on the second floor of the Eiffel Tower, or the Tour d’Argent with Paris stretching into the distance (plus a close-up of Nôtre-Dame Cathedral) you will know that tables with a view come at a high price.

Well, they do in Paris but not in the centre of Palma — especially on the 8th floor of the Hotel Almudaina in Avda Jaime III which houses the Sky Bar.

From there you have marvellous vistas that take in the port and its activity, a vast swathe of the ancient tiled roofs of Palma and the Cathedral, standing solidly and resolutely, as if guarding the city.

The Sky Bar has interior and exterior sections. You want to be on the outside, its little terrace, which seems to jut out from the main building. That’s where the panoramic cityscape and seascape burgeon.

The hotel management is fully aware they could cash in on this this scenic bonanza and charge dearly for its menú del día — indeed, serve only à la carte dishes.

But they don’t. Instead, they give us a menú del día from Monday to Saturday that is quite delightful and costs only €15 with VAT.

The price includes a choice of three starters, two mains and two desserts, plus a drink that can be water, a soft drink, a caña, a glass of verdejo (white) or Rioja (red). Menús del día never come more inclusive than that.

This was my third visit to Sky Bar over the years and I have always had a most pleasant menú del día. And I have never had a serious complaint about the cooking. 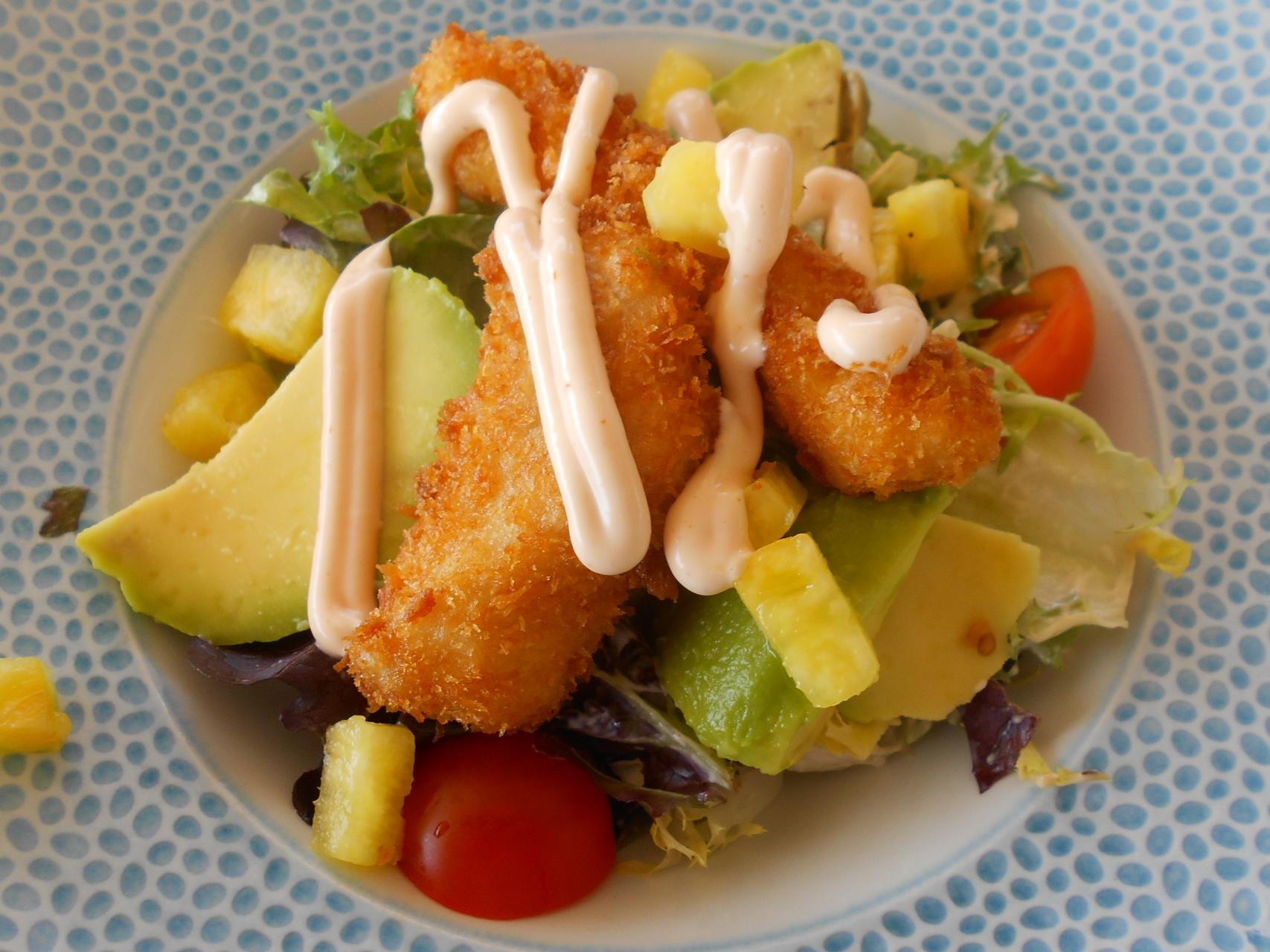 We could have started with a cooling salmorejo, Cordoba’s variation on the gazpacho andaluz, but as soups are not at all photogenic, we had shrimp rolls with sweet chilli dressing, and crunchy chicken salad with pineapple and avocado.

I kind of expected the shrimp roll to be bought in but it most certainly wasn’t. It was a large one, sliced in three, with a wrap that was nicely brittle and with a light and crisp filling. The kind of dish that makes me want to do an Oliver Twist.

The chicken salad was done with finger-like slices of breast in a crisp breadcrumb coating served with pieces of avocado and diced pineapple. This is the second time this month I’ve had pieces of pineapple in salads and its special flavour is a lovely addition. The two mains were most successful. The ensaladilla and the Mallorcan-style cuttlefish didn’t actually pair very well, but I’m not complaining: I adore ensaladilla and this one was moist and tasty. And the cuttlefish was butter-soft and tender. 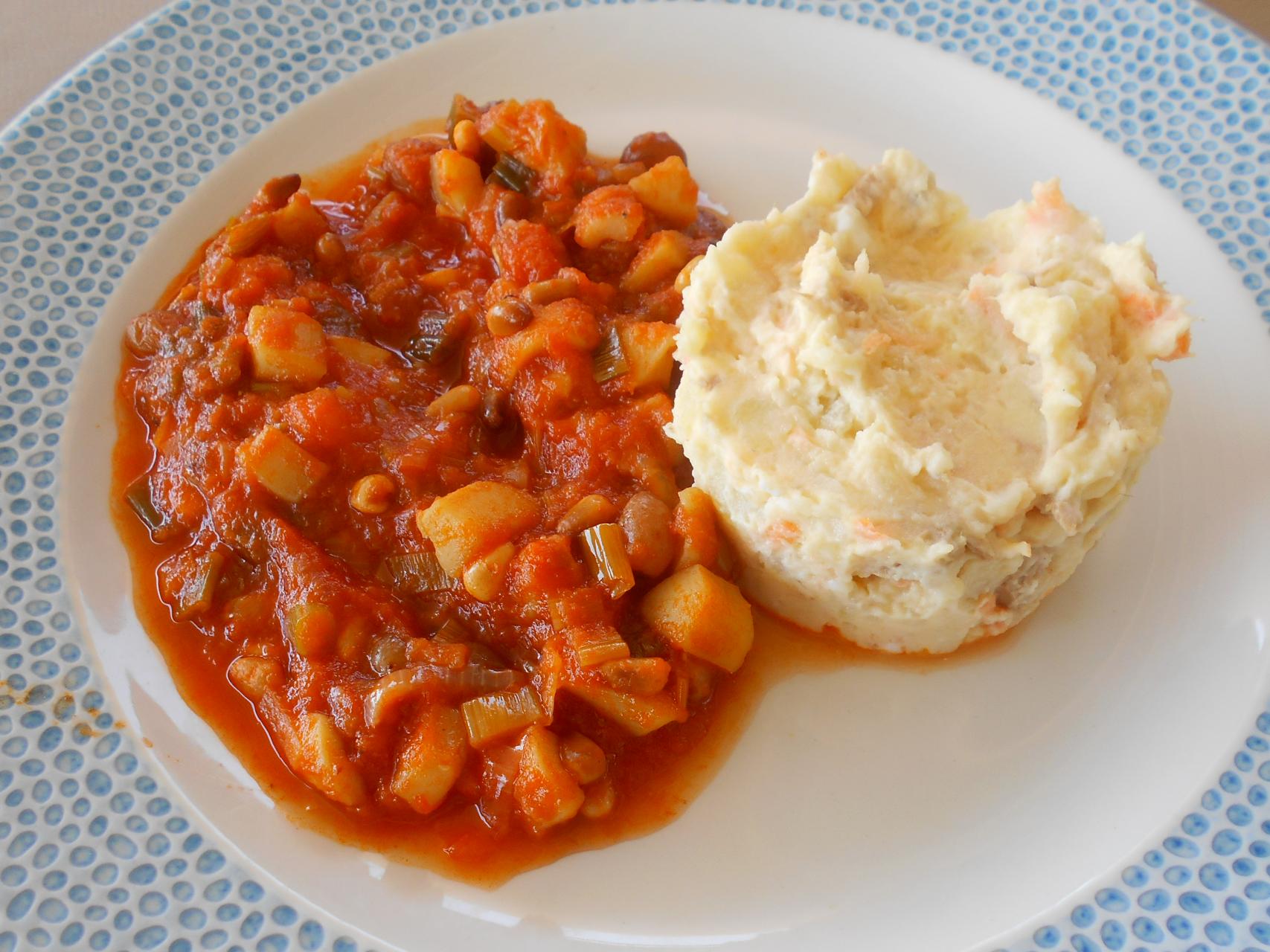 The favourite dish of the day, by which I mean most tables were having it, was an absolutely scrummy pork fillet in a green pepper sauce. The meat was tender and tasty, the sauce silky smooth and the chunks of potato were nicely fried. It all added up to another excellent Sky Bar menú del día.

Delish desserts are a speciality

When we go into supermarkets or department stores like El Corte Inglés, all day long a voice comes over the loudspeaker system reminding us not to let our guard down and to follow the anti-covid safety regulations.

Not letting our guard down is good advice for general everyday living — but the vast majority of us don’t aways take it.

Some professional cooks are guilty of taking risks — not health ones but those of a culinary nature. Such as taking short cuts and serving desserts that are bought in.
Sir Michael Caine, who used to have an interest in a well-known London restaurant, said the two most important items a restaurant serves are the bread and the coffee: the bread is the first thing a customer tastes, and the last one is the coffee. If both are good, the meal starts well and ends even better.

It’s the same with desserts: they make a lasting impression and cooks should ensure it’s a memorable one. But so many look on the dessert as a way of saving time and serve factory-made substitutes. That’s especially the case with menús del día.

The bought-in dessert doesn’t have to be trashy. One very good place in the Paseo Mallorca-Jaime III circuit was doing a €17 menú del día with two home-made desserts. Then it cut it to one, with the second being ice cream or sorbet. The ice cream is most edible, but this wasn’t a wise move. 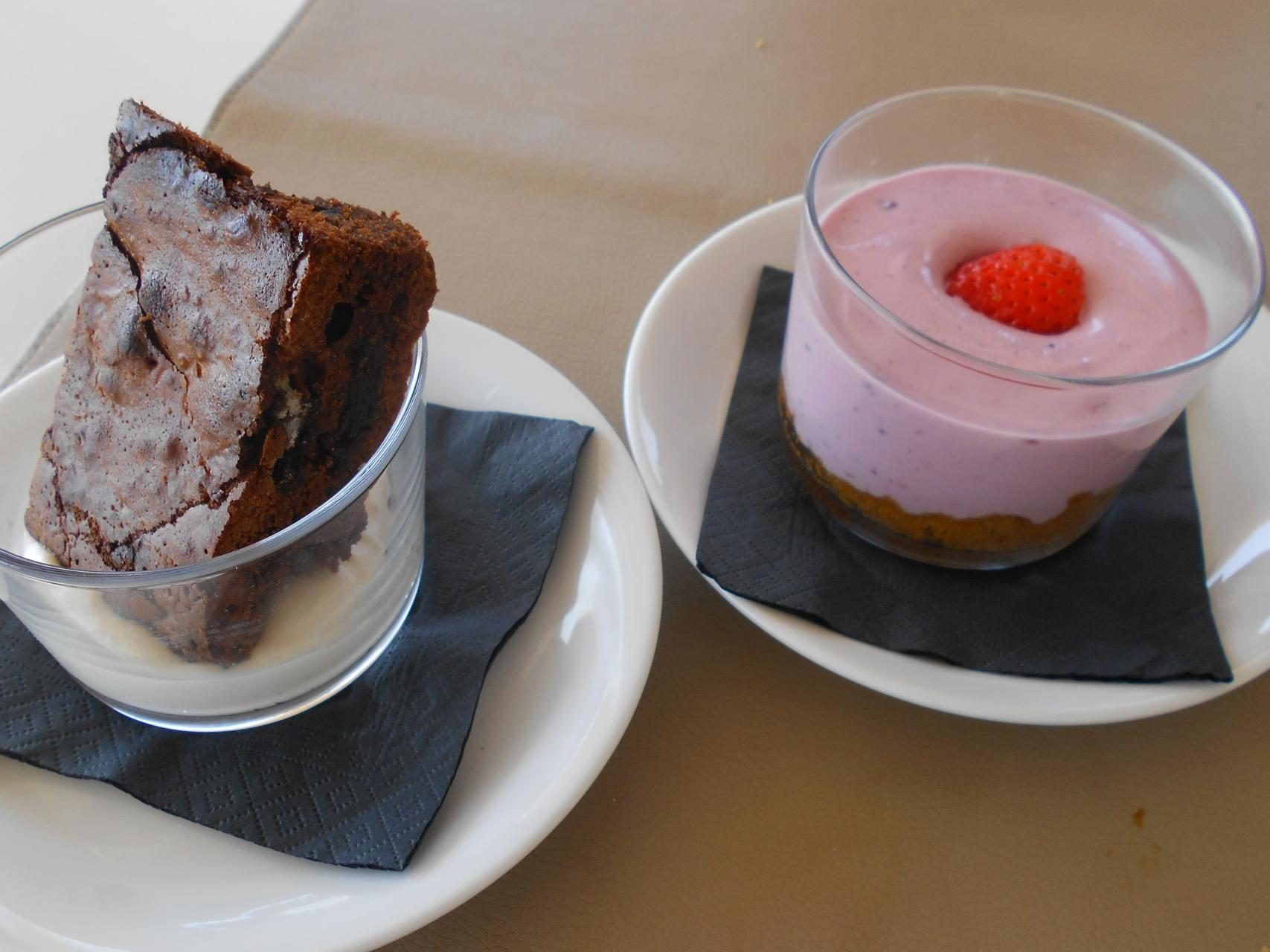 A few other places always have home-made desserts on their menú del día and they take special care with them. They include Naisa, next to the National Police headquarters in Calle Simó Ballester (a €17.50 menú), and La Bodeguita del Centro in Calle Carmen, off the Vía Roma, with a €15.90 menú that’s one of the best in Palma.

The Sky Bar cooks really go out of their way to produce memorable desserts. A mere sideways glance at this week’s two desserts is enough to tell you that this Oreo brownie and deconstructed red berry cheesecake will make very good eating. And they did.
The brownie was a good robust version with plenty of flavour and a great coarse texture, which you’d expect when Oreo biscuits are among the ingredients.

I have always disliked deconstructed dishes, looking on them as mere idiocies made by conceited cooks who think they have great creative talent. But the red berry cheesecake was a good idea and it worked beautifully.

We got a crumbly base that had a good gritty touch that contrasted very well with the super smooth pink concoction made with the sieved fruit.

These were two desserts of à la carte standard guaranteed to take your eyes away from those panoramic vistas until you have finished them.

The Sky Bar kitchen is extremely consistent: I have eaten the menú del día on three occasions and I have never had a disappointing dish. All of them were like today’s: nicely and conscientiously cooked and some of them so splendid I would have liked a repeat. But none of the dishes were absolutely outstanding, so there were no 10s for the kitchen. But I did award a 10 to another section of the hotel: the management. 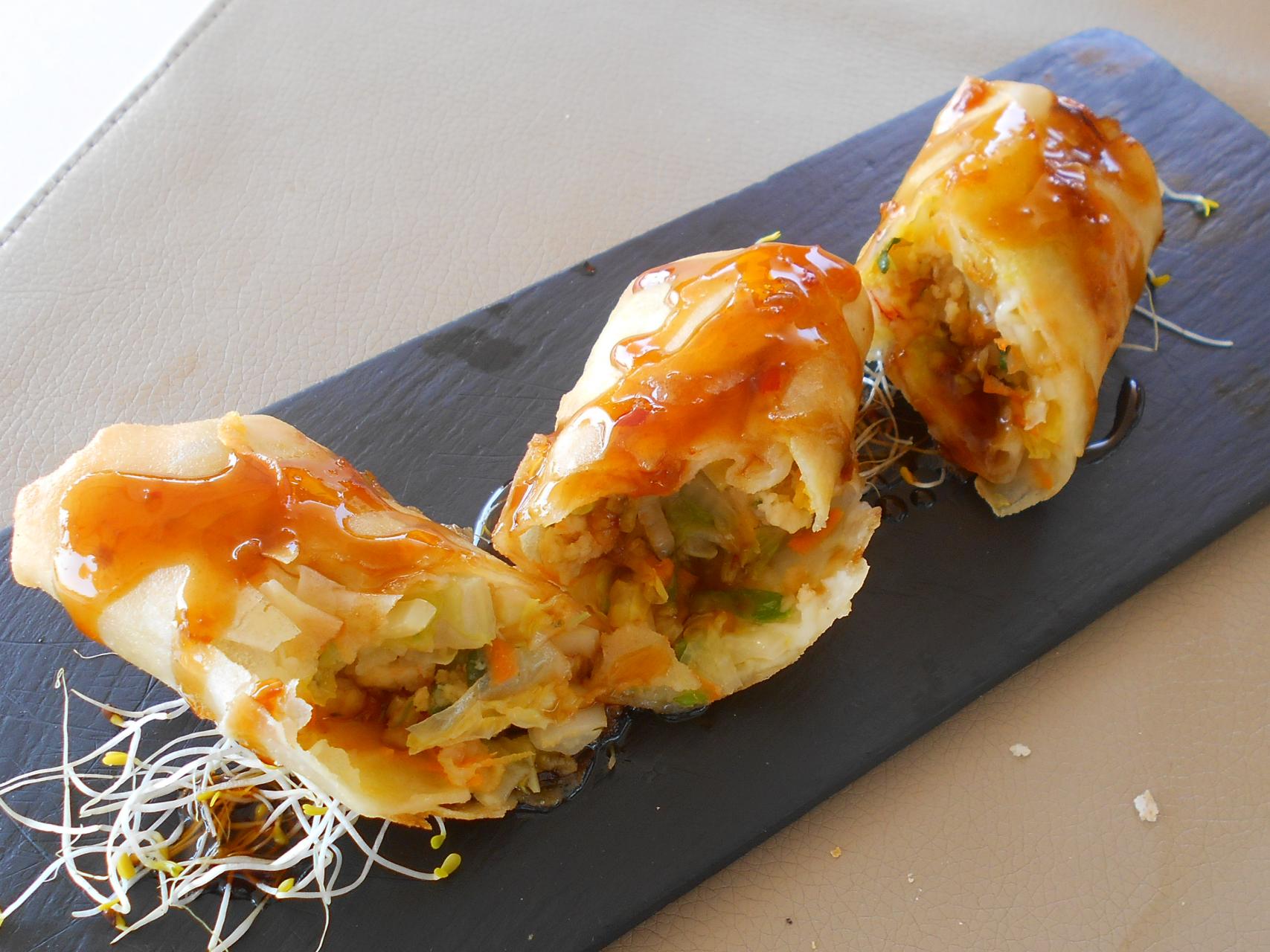 It’s for their impeccable attitude towards their guests and outside customers — and for being so noble and generous. Most other places with panoramic vistas like those from Sky Bar would have cashed in and served à la carte dishes only — and with inflated prices. Instead, Sky Bar serves lovely menús del día for only €15 which have never given any cause for complaint. It’s actually incredible, but it’s true. And it’s been happening six days a week for years.

Sky Bar, Hotel Almudaina, Avda Jaime III 9, Palma. Tel:971-727340. This is the reception desk, so ask for Sky Bar and they will put you through. The menú del día is served for lunch from Monday to Saturday and changes every week. They have an à la carte menu for dinner. Some of the hotel guests go for the menú del día, so it’s best to make a reservation — especially if you want to sit outside where the best views are.

The €15 price includes everything; starter, mains, dessert, bread, drink and VAT. We had no extras, so the bill came to €30. But I regret not ordering another shrimp roll. They were superb.