There are certain kinds of restaurants where I always get a good gastronomic deal. I invariably eat well at Mallorcan restaurants in Sa Pobla, at the cellers in Inca, specialist fish places on the coast, genuine Italian restaurants, Galician places all over the island, Chinese restaurants where Chinese people eat and (among other eateries) Argentinian and Uruguayan restaurants.

The last two are mainly for lovers of red meat because their speciality is various kinds of Argentinian cuts of the cow cooked over hot embers.

Every nation has its own way of splitting up a side of beef into steaks, chops and other cuts for frying, roasting or stewing. You get cuts of beef in England that aren’t available in Scotland, and vice versa.

All nations make use of the expensive cuts such as fillet steaks, entrecôtes, beef chops and standing rib roasts, the noble cuts as they are called in the trade.

Argentinians and Uruguayans are experts on the chargrill and are especially good at getting the most out of the less expensive cuts of beef. That’s what you mainly find at Uruguayan places such as Parrilla Tabaré which, like other restaurants of this kind, also have a special offer for red meat fans.

It’s called a parrillada libre and at Tabaré it offers two meats, black puddings, fresh chorizos, salad and fried potatoes — and you can do an Oliver Twist on these dishes as frequently as you like. The price is €14.90 and drinks are not included. 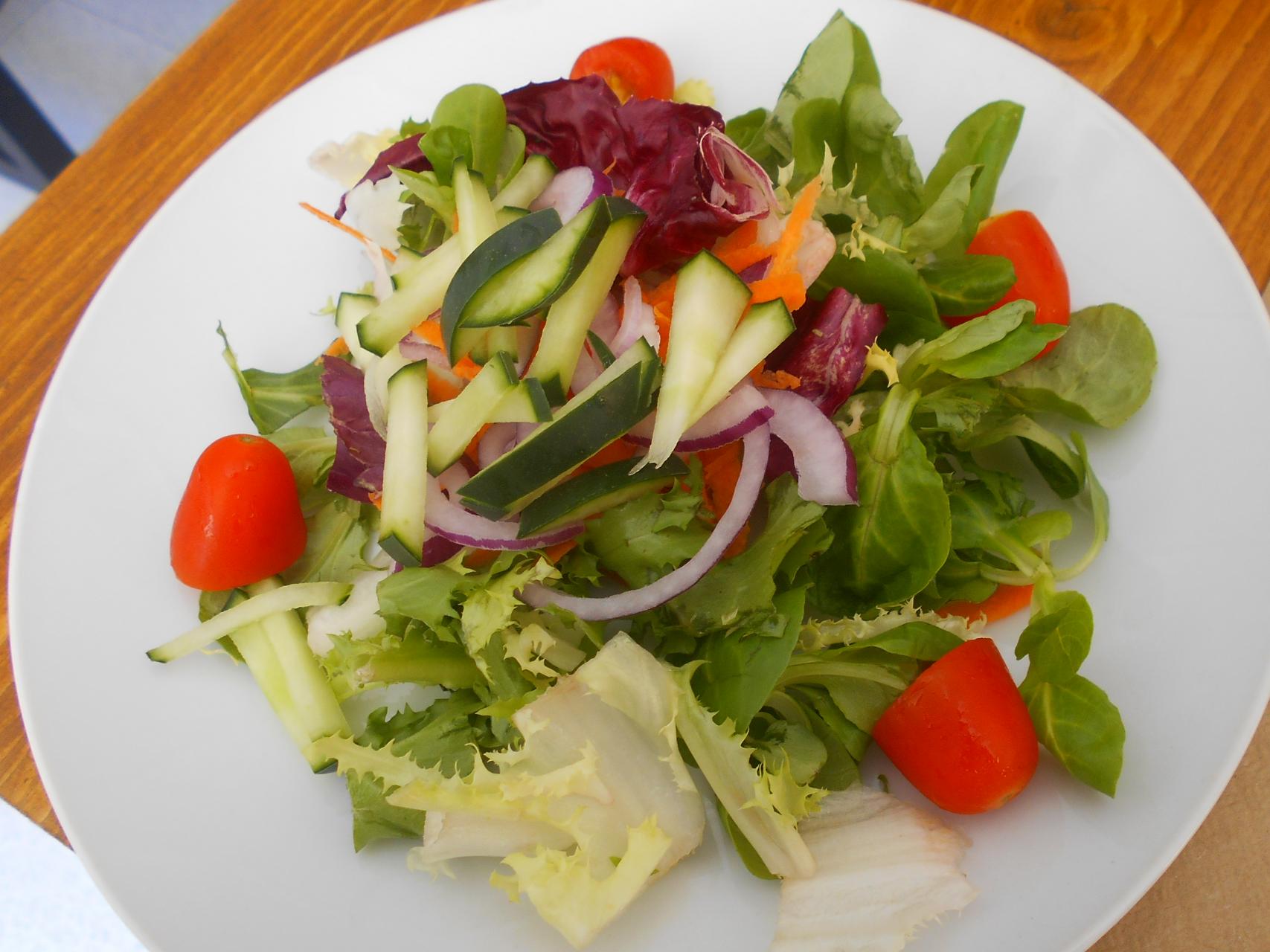 The two cuts of beef were the traditional and highly popular ‘asado de tira’ and the ‘vacio’.
The ‘asado de tira’ is a beef rib cut transversely. As you can see in the picture, you get a strip of meat with little knots of rib bone.

The ‘vacio’ is situated between the ribs and hind quarters and it is one of my favourite cuts from this part of the world. You sometimes get it of medium thickness but at Tabaré it comes in a chunky piece, which is ideal for getting a nicely pink underdone finish.

Uruguayans and Argentinians are inclined to overcook both of these cuts (because that’s how they like them), so I always ask for mine to be very much on the rare side. And that’s exactly how they came, so both were juicy and tasty. As the ‘vacio’ was a thick piece it was especially pink and flavoursome.

Neither of these meats is as tender as an entrecôte, but they are not tough. As with all of the less noble Argentinian cuts, however, they have to be well chewed.

This has its advantages. By giving the meat a good quiet chomp we are slowly squeezing out its abundant juices — and that is where the flavour is. These pieces of meat are actually tastier than fillet steaks. 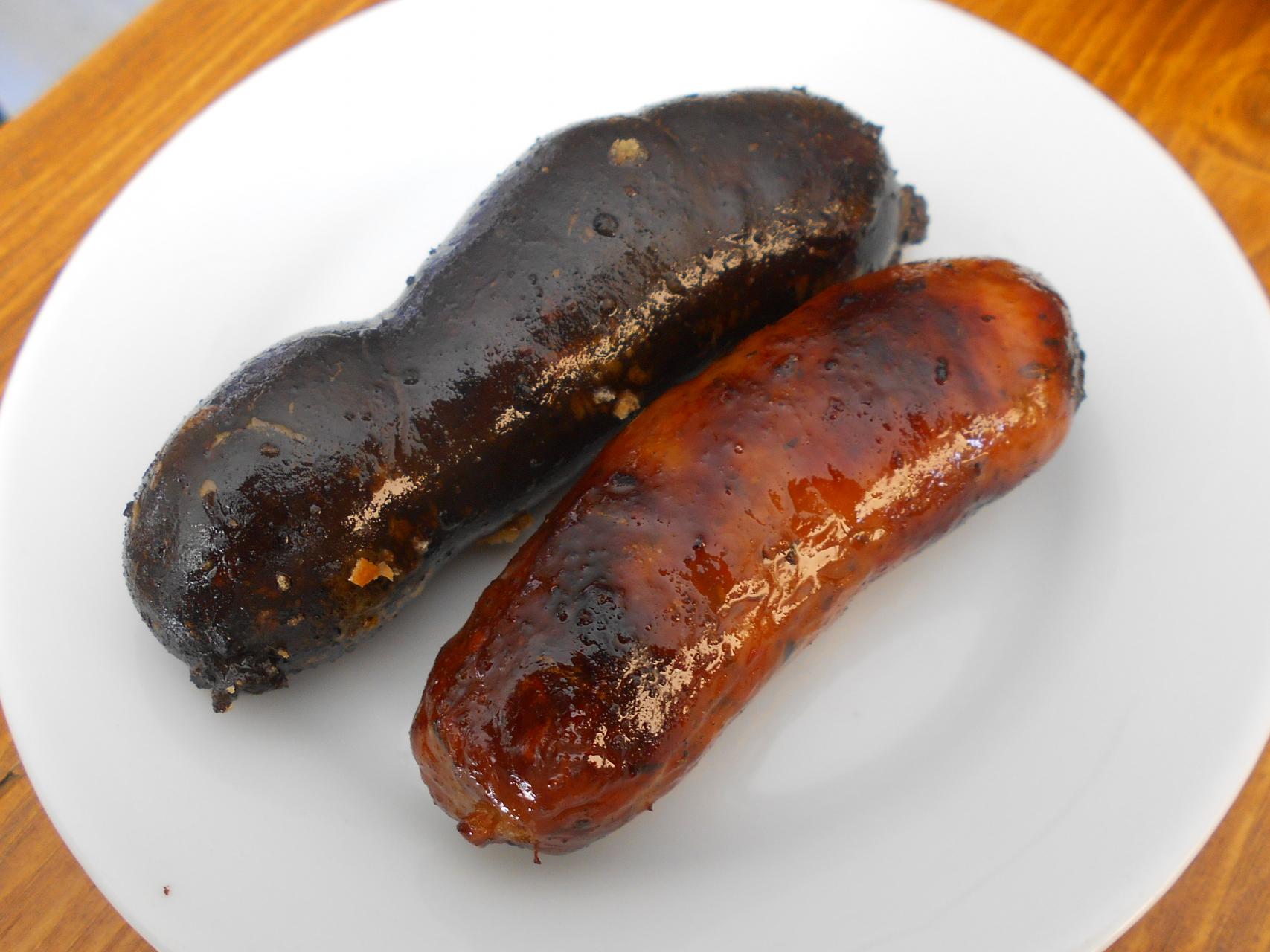 So when ordering be sure to say you want your meat underdone. It wouldn’t be a bad idea to take along these Bulletin pages, point to the picture of the very pink ‘vacio’ and tell them that’s how you want yours…assuming you also like rare beef.

At Uruguayan restaurants such as Parrillada Tabaré you will always find empanadas criollas: turnovers with minced meat fillings or vegetarian options.

On parrillada libre menus at some restaurants, the empanadas are included, although you can’t have seconds. At Tabaré they are an extra but as I would never go to a Uruguayan restaurant without trying an empanada, I ordered two á la carte. 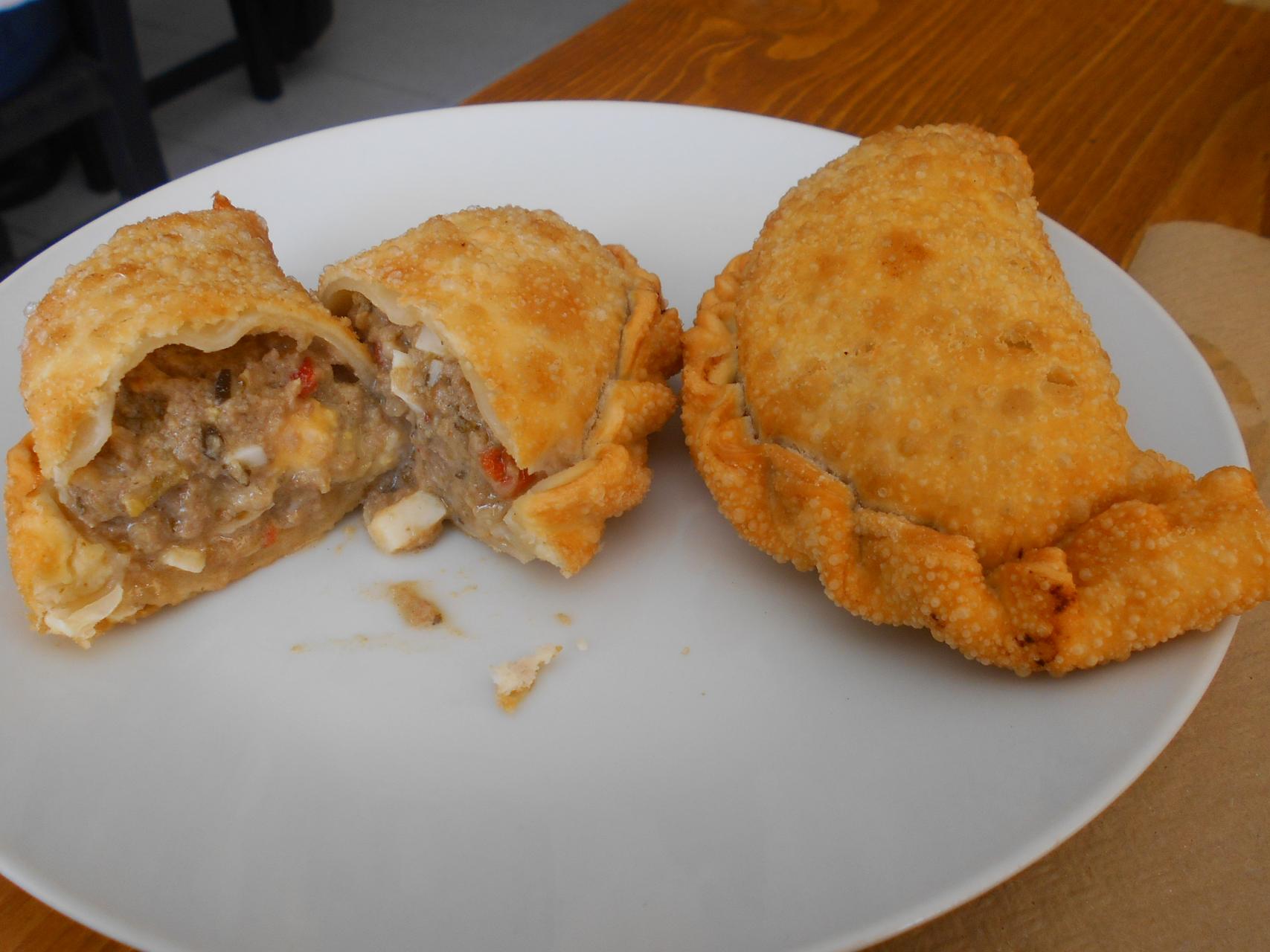 As always the empanadas can be oven-baked or deep-fried. Most Uruguayans prefer them fried in deep oil because they are tastier that way…but also more calorific. I disregard the extra calories and make amends next day by cutting down on something to even up the extra calorie intake. It works.

The Tabaré empanadas came to the table as hot as lava rolling down Vesuvius and we had to leave them for a couple of minutes before we could even nibble one.

And the empanada was totally delish. They always are. The minced meat filling was nicely moist, bursting with flavour and the pastry, thin but providing a good support for the filling, was memorable in texture and taste.

If you are fond of English-style black puddings, those at Parrillada Tabaré will be to your liking. Argentinian black puddings are frequently on the soft side and although I eat them most willingly they are not my favourites.

But those at Tabaré had a lovely dryish filling, very loose and packed with flavour. They were without doubt the best black puddings I’ve ever had a South American restaurant.
When one of the cooks came out asking if we’d like a repeat on any of the meats I wanted to ask for another black pudding…but I was too full.

The chorizos criollos are as thick as Cumberland sausages but have an all-meat filling. Their texture is usually somewhat compact and the chargrilling makes them extremely tasty.
The mixed salads they serve with a parrillada are always different in content but they are the same in one important aspect: every item is cold and very crisp.

The chips served with parrilladas usually come straight from the deep-fryer. That was the case at Tabaré except they prefer to cut the potatoes in smallish wedges. 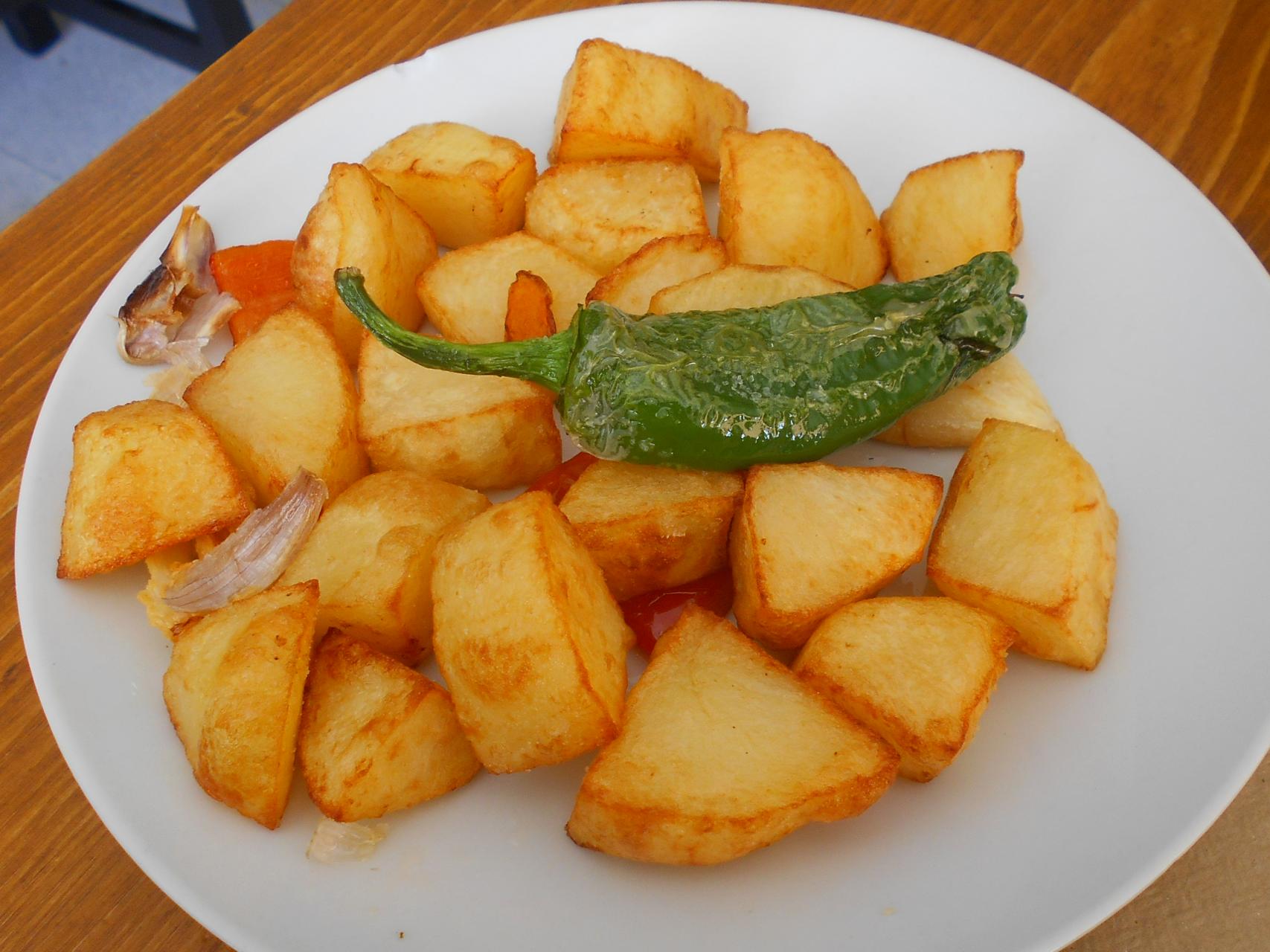 When the bill came I looked at the total and paid. But when writing the review and taking a closer look at the bill, I saw they hadn’t charged for the empanadas which cost €3 each.
At first I thought they must have forgotten to put them on the bill and then it occurred to me that as we hadn’t done a repeat on any of the meats, they let us have the empanadas on the house. The Uruguayans, like the British, know a thing or two about fair play.

Argentinian and Uruguayan restaurants are always a good buy — both for what you get on your plate and for the price on your bill. They usually have a mixed grill deal that includes meats, salad and fried potatoes but not drinks. At Tabaré this mixed grill, called a parrillada libre in Spanish, includes the two popular cuts called ‘asado de tira’ and ‘vacio’, black puddings, fresh chorizo criollos, salad and fried potatoes straight from the deep-fryer.

There is also a basket of freshly baked bread, alioli and two dips — for use with the bread or the meats. This meal is called ‘libre’ in Spanish because diners can have seconds (or thirds) of anything on the special menu. All for €14.90 per person without drinks. A great bargain. We asked for our meats to be underdone and they came very pink — absolutely bursting with juice and highly flavoursome.

Parrilla Tabaré, Calle Andrea Doria 62, Palma (opposite the old Son Dureta hospital). Tel:871-714957). The €14.90 parrillada libre (a special offer mixed grill) is available from Monday to Thursday. It’s dearer at the weekend. They have an indoor dining room as well as a terrace but this is the kind of place that can fill up on any day, so it’s always best to make a reservation.

When the bill came I simply looked at the total and paid. But when doing the review I took a closer look and realised they hadn’t charged for the empanadas criollas. I think they were €3 each. With two cañas costing €2 each, the final bill came to €33.80 with VAT.