When Rafa Nadal hit the winning stroke that ended the epic 5 hour and 20 minutes Australian Open final in Melbourne, a tsunami of euphoric screams resounded all over the country (and many parts of the world) and there were floods of joyful tears.

And at the Italian restaurant La Bottega di Michele, a delighted Marcella immediately said to husband Michele: “After that incredible victory we’ll have to dedicate a dish to Rafa.”
She said to me this week: “For years we’ve had a pasta dish named after Sophia Loren, Italy’s greatest international star. As soon as Rafa hit the winning ball I wanted Michele to do a dish for Rafa.”

Michele started to think of a pasta to pair nicely with his pappardelle Sophia Loren — done with large gambas and other seafood, plus Italy’s broadest long pasta.

For the restaurant’s new star dish he plucked some other fish and shellfish from the sea and the result is tagliatelle Rafa Nadal: big cigalas, gambas, clams, medallions of monkfish and threads of saffron to give it an unforgettable taste.

The cigala symbolises the majestic greatness of Rafa’s tennis that was much in evidence in Melbourne, and it dominates the plate of tagliatelle like an undisputed champion on the highest podium. 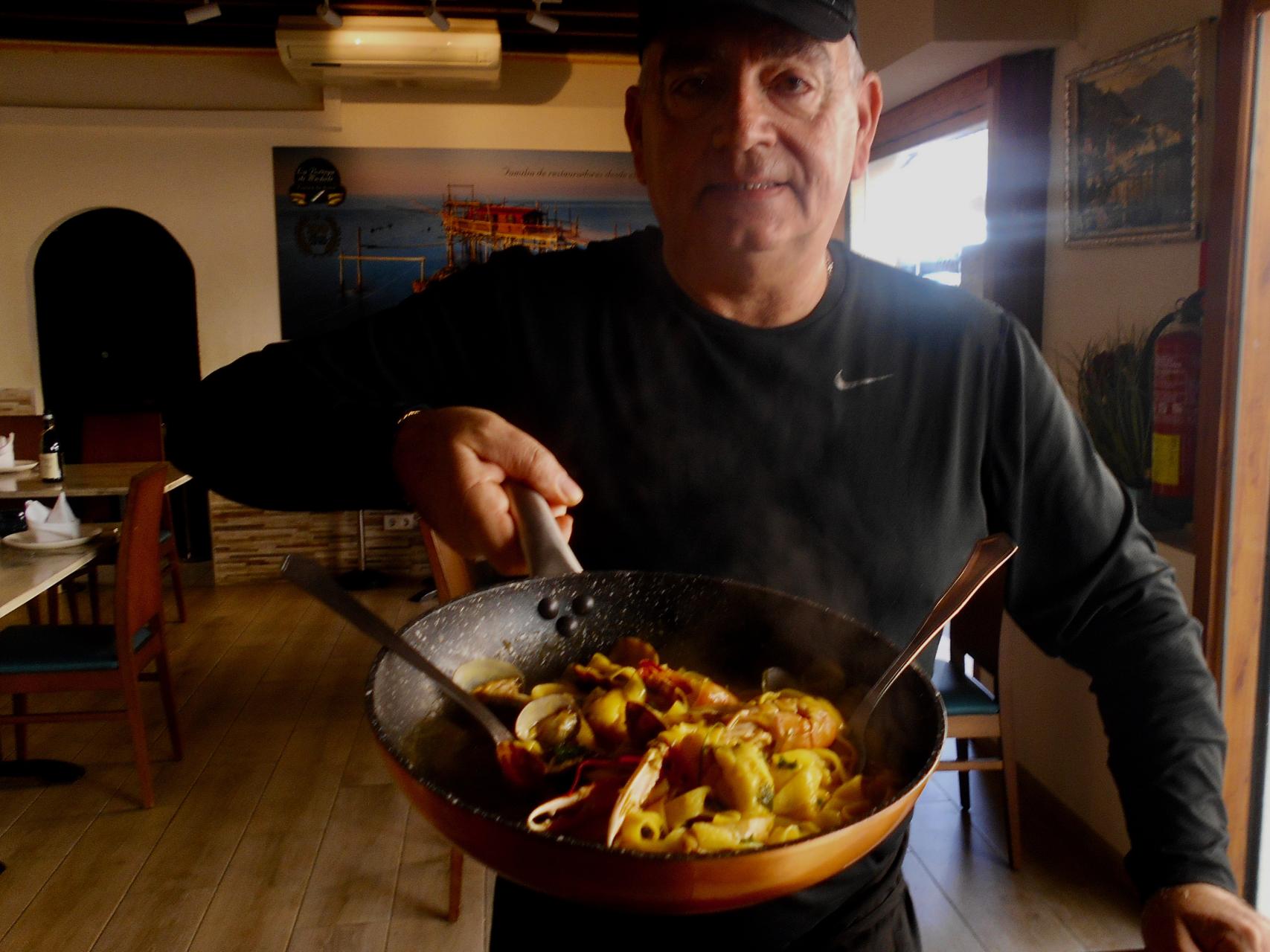 I was delighted to see that Michele had used nuggets of monkfish which I adore but seldom come across in restaurants — and when I do it usually doesn’t come within my review budget.

But monkfish, like so many other pleasures from the sea, can be a bit of a traitor in the kitchen.

It’s the kind of fish that gives the cook very little leeway: it was to be done spot-on.
If it is even slightly undercooked it can be on the tough side, and if it is overdone it becomes squishy and tasteless.

But Michele is an old hand with the cooking times of fish and meats and his nuggets of monkfish were juicily tender and tasty. Sheer perfection.

The gambas, without the heads but with the tail shell, had that crisp-like texture you get when they’re fresh and cooked au point. The clams were plump and that means absolutely bursting with the taste of the sea.

Michele knows that most of his customers do not go in for pasta with the extreme Italian al dente touch, so the tagliatelle was just right. And he used the saffron with astute precision — its lovely perfumes and flavours were nicely in place.

There was an accidental, but most happy, coincidence in this dish named in honour of Rafa Nadal. Michele could have used smallish Canadian lobsters, but instead he went for the more expensive (and more elegantly scrummy) cigalas…without knowing that Rafa prefers cigalas. 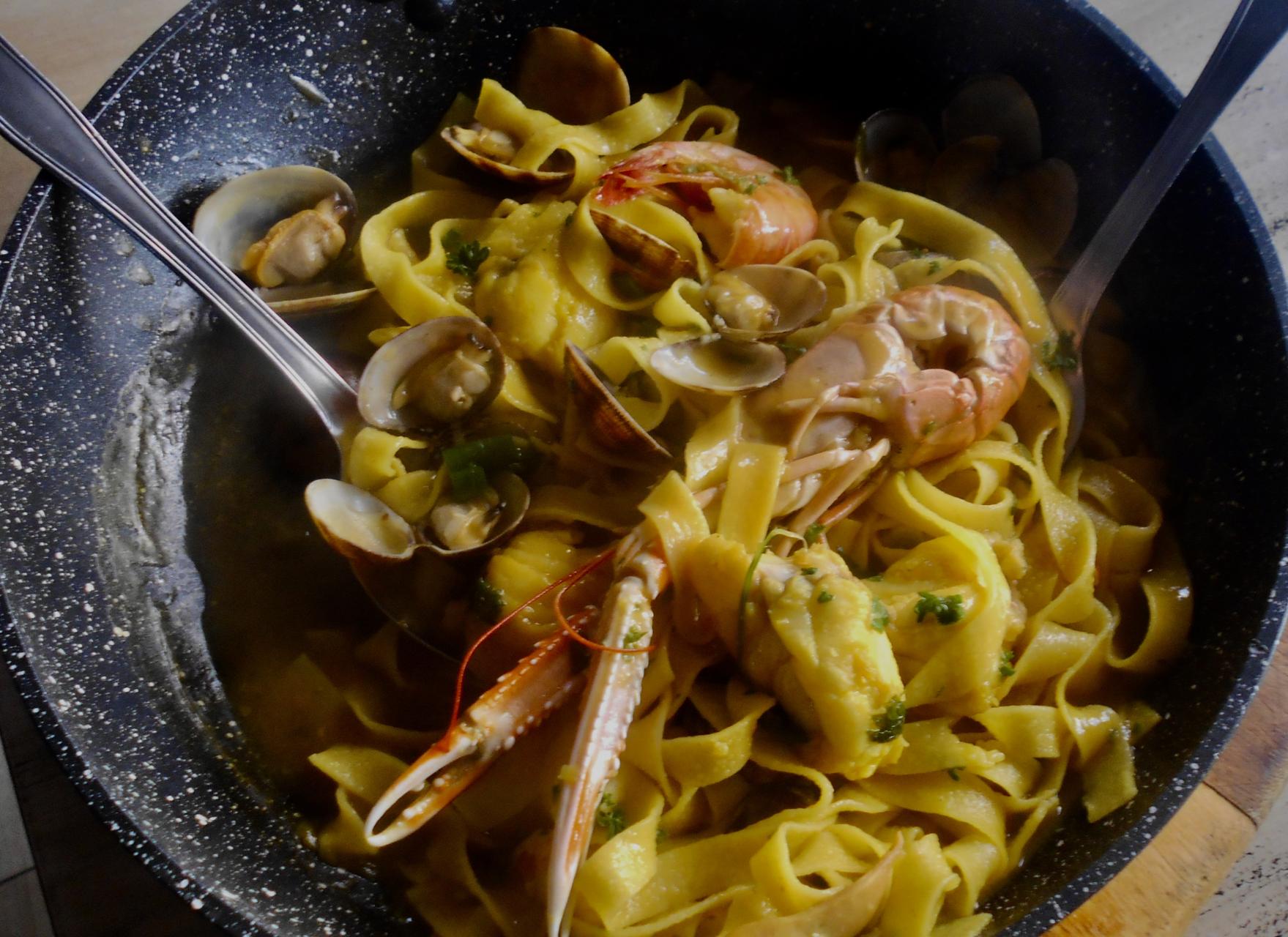 About four years ago, when my friend Pepe Ariza had a stall at the Mercat d’Olivar fish market, he said to me one day when I was doing one of my rounds: “Do you want to see what Rafa Nadal is having for dinner tonight?” He took me down to the walk-in fridges in the basement and showed me a wooden box filled with the biggest cigalas I have ever seen, all of them moving about with the jerky movements of some dancers that accompany top pop singers.

This was an order for the Nadal family’s restaurant in Cala Bona and they were for a dinner with Rafa that night. But Michele didn’t know cigalas are Rafa’s favourite shellfish.
As tagliatelle Rafa Nadal has to be made when the order comes into the kitchen and with that day’s fresh fish and shellfish, it will only be a blackboard dish from time to time. Its price is €29 and it can also be ordered for a minimum of two.

Tiramisu is a coffee-chocolate flavoured dessert that an Italian invented in the 1800s but didn’t become famous outside of Italy until the 1980s. It didn’t come to Palma until the 1990s. And that was when I discovered it. 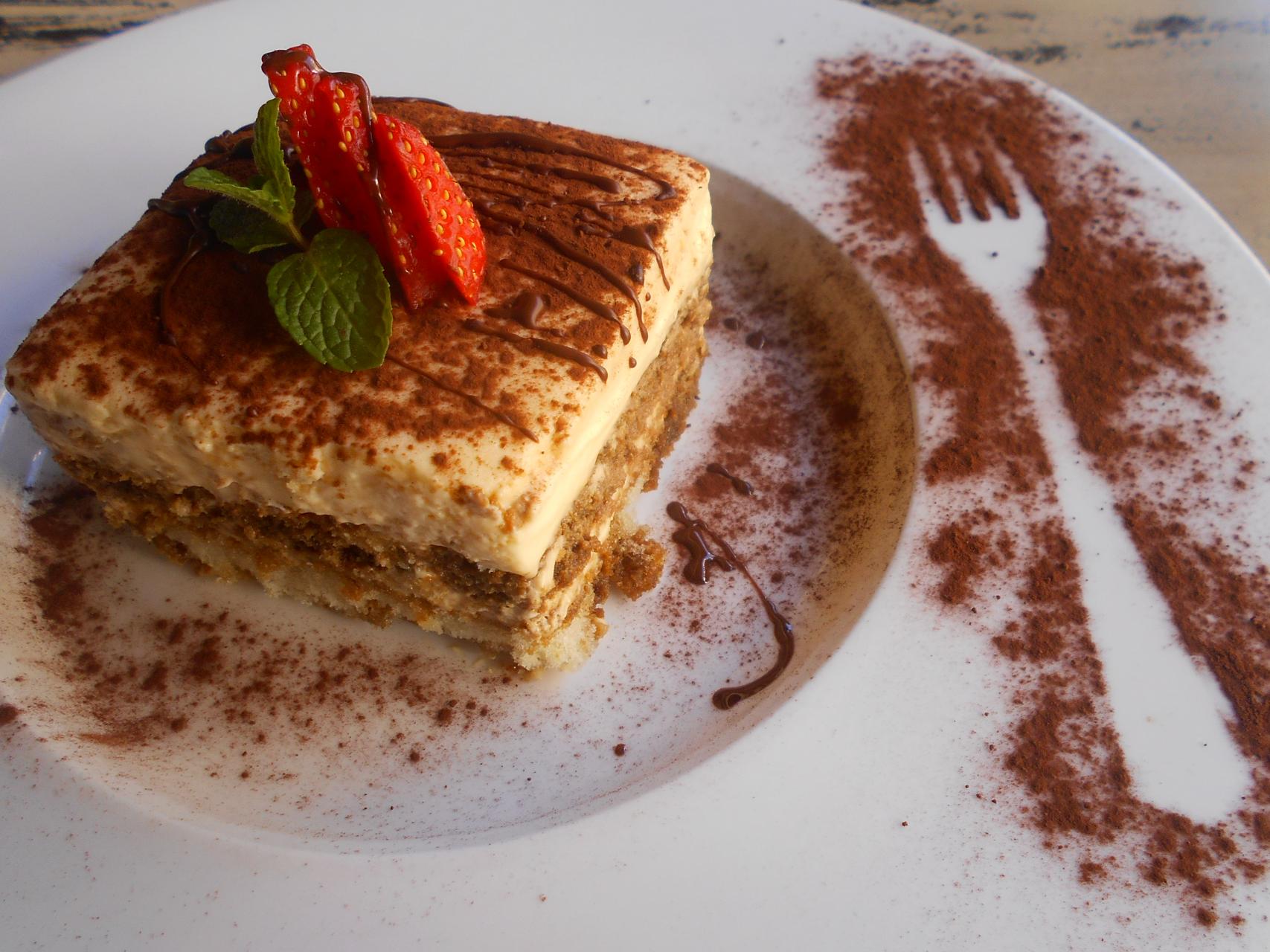 My first taste of tiramisu was sheer bliss. I had it in the old Via Appia in Calle Fábrica, one of three restaurants then owned by the Caporale family. I had my most recent tiramisu last week in La Bottega di Michele, now the flagship restaurant of Michele Caporale.

Michele is lucky to have the best Italian desserts cook in Mallorca. Her name is Marcella and she’s his wife. Ask for any of the desserts and you’ll end your meal on a lovely note. Order a tiramisu and you’ll be served the best one I have ever tasted.

Until last week my ending to a meal has always been glass of limoncello, the lemon-flavoured Italian liqueur that is usually served by Laura, one of the best waitresses in Marcella’s front of house team.

When I had finished my last piece of tiramisu, Laura was passing near my table and she lifted her fingers to her mouth in a drinking motion. I took that as a silent movie way of asking if I was ready for my usual limoncello, so I answered with a wordless smile and an eager nod.

But what came to the table was a ristretto in a tiny cup with a trio of amarretini, the small almond macaroons flavoured with apricot seeds. I never have coffee after a meal but I’ve never had a ristretto, so I thought this was a chance to try one. 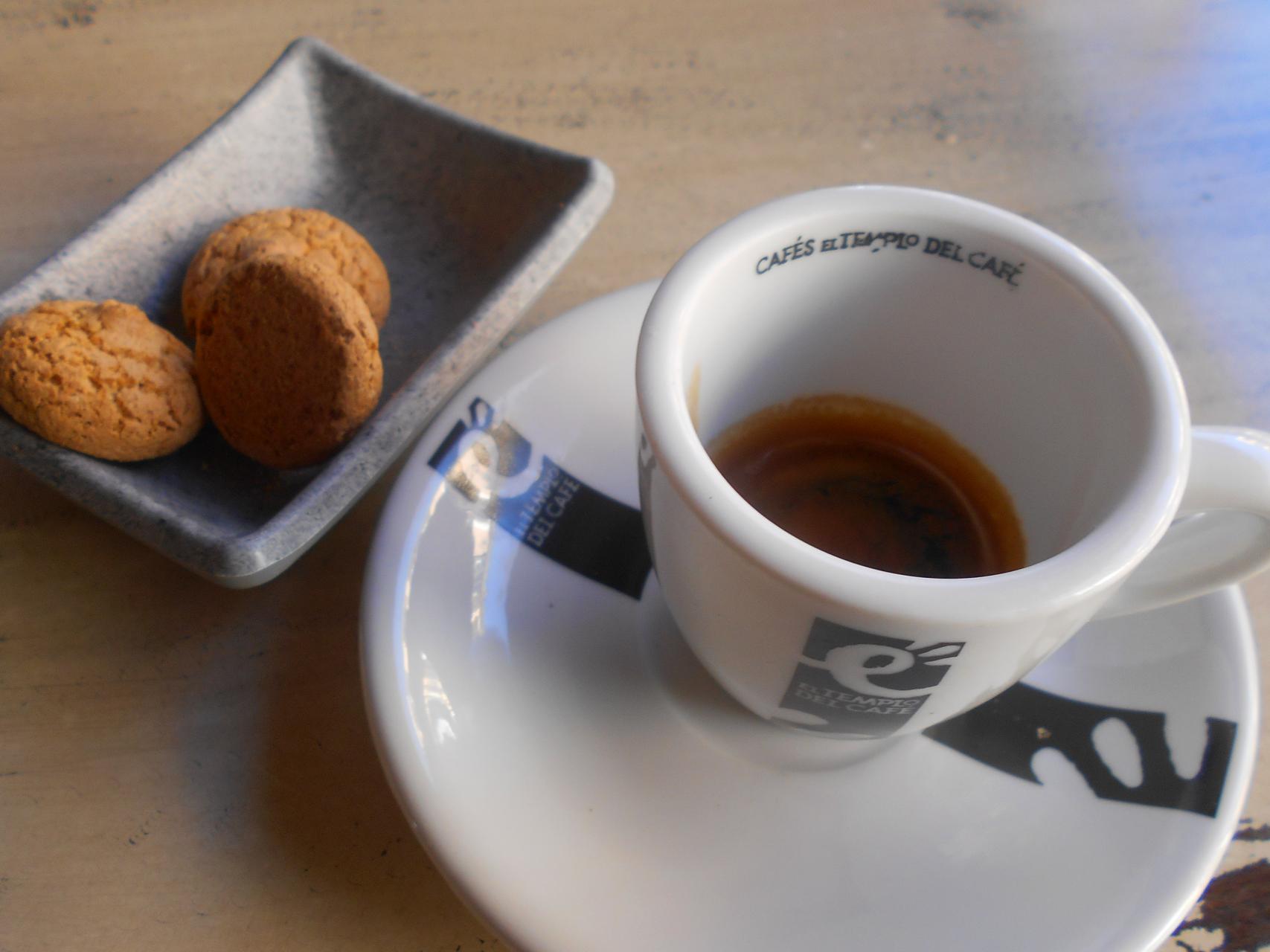 The word ristretto means reduced or concentrated, and what was in that little cup was no more than an English dessertspoon of espresso coffee. And very very concentrated it was.
Italians down their ristretto in one gulp to get a blast of caffeine that could have come from a Smith & Wesson 385, the gun that Dirty Harry carries. I took mine in three minute sips — and still got a huge shoot of caffeine.

But next time I’ll get my coffee kicks only from Marcella’s tiramisu, a word that means ‘pick me up’ in the dialect of Treviso. The ristretto most definitely picked me up…I didn’t get to sleep until four in the morning.

When cook-owner Michele Caporale does something special he takes even greater care than usual and makes a superb job of it. I’ve tried his pappardelle Sophie Loren, a memorable dish based on Italy’s broadest long pasta and with large gambas and other shellfish. The tagliatelle Rafa Nadal, which was conceived when Rafa hit the winning stroke in the Australian Open, is a majestic dish that’s most suitable for commemorating such an historic event and a unique player who is Mallorca’s (and one of the world’s) greatest sportsman.

The choice of cigalas as the main shellfish is a happy one and it gives the dish a lovely touch of elegance. The nuggets of monkfish were perfectly cooked and were at their scrummy best: a superb texture and taste that isn’t always achieved even by the better cooks. The dish is beautifully perfumed with the judicious use of saffron. Michele’s wife Marcella is in charge of the dining room, but she also makes the desserts. Her tiramisu is a ‘must have’ end to the meal — it is by far the best I have ever tasted. No other tiramisu I know is even in the same league as Marcella’s. That’s how unique it is: in a league all by itself.

La Bottega di Michele, Calle Fábrica 17, Palma. Tel:971-454892. Closed on Wednesdays. It’s always best to make a reservation because La Bottega is one of those places with a long list of contented regulars and it can easily fill up on any day or night of the week.

This meal was a press invitation, so it was one of the very few occasions when I didn’t pay. But for reference, the dish named after Rafa costs €29 and will be on the blackboard only occasionally. But it can be ordered for a minimum of two people. The tiramisu costs €7 and the tiny ristretto coffee is €2.