Black Olives - This year’s is a good one

"I have never had a genuine tapénade in any Mallorcan restaurant"

There was good news for Mallorcan foodies a couple of weeks ago — the island’s black olives crop was a good one and that means there will be plenty of the unique ‘panssides’ variety for serving in salads and with pamboli.

You’ll find different types of great black olives on sale but connoisseurs prefer the shiny ones with wrinkly skins and a seductive soft flesh.

They’re called ‘panssides’, a word that comes from ‘pansa’, Mallorquín for raisin — this black olive gets the ‘panssides’ nickname because it is as wrinkled as a raisin.

These black olives are left to ripen until the skins dry out and become wrinkly leaving the flesh lusciously soft and tasty. At a couple of stalls in the Mercat d’Olivar you’ll find them ready for a simple dressing with olive oil and seasonings. 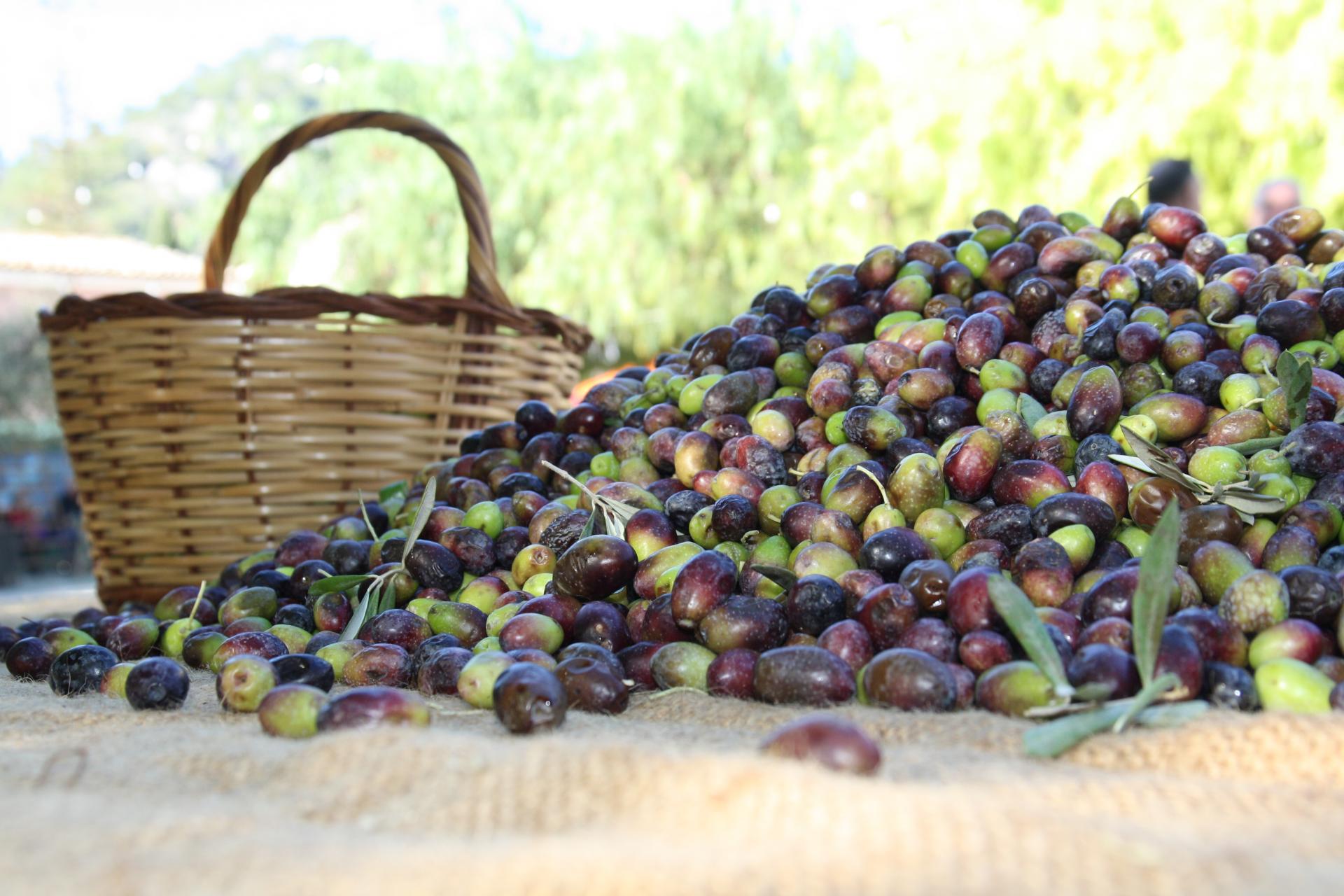 Mallorcans add them to all kinds of salads, one of the best being slices of fairly large tomatoes with a dressing of virgen extra olive, salt and pepper and the panssides. The shiny jet black olives sitting atop the brightly red slices of tomatoes is an appetising sight.

The panssides olives are so delicious, however, that many people (myself included) eat them as a snack with nothing but sliced Mallorcan pan moreno drizzled with virgen extra oil, and a glass of red wine. It’s a superb tasty way of taking the edge off one’s mid-morning appetite.

But it’s in Provence that you’ll find the best use for well ripened black olives — it’s their little starter called tapénade which most of us didn’t hear about until just over 70 years ago.

But tapénade didn’t arrive in Palma until the late 1990s — although it wasn’t an authentic version. What we were offered then (and even today) simply wasn’t tapénade. I have never had a genuine tapénade in any Mallorcan restaurant because everyone cuts corners and produces ersatz versions.

Some of the tapénades I have been served couldn’t even be called fakes — they were simply black olives pounded to a paste. That, at least, is one of the ingredients. 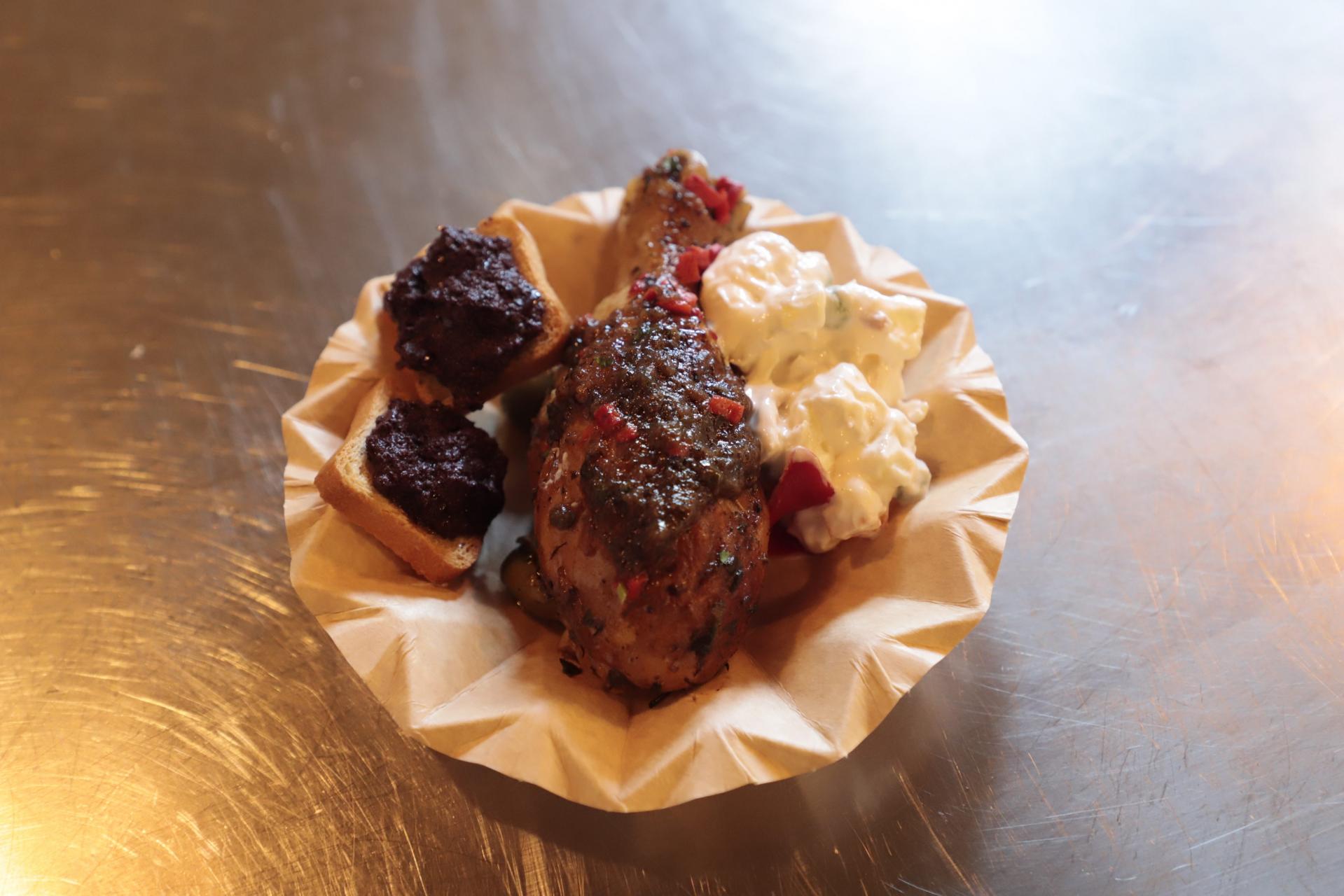 Some Palma restaurant cooks, especially those doing vegetarian dishes, put the pounded black olives into ramekins and passed them off as tapénade.

Tapénade is the famous Provençal classic made with black olives, capers and anchovies in olive oil. It is sometimes classified as a sauce but it is more of a spread or even a kind of pâté to be served on its own or as part of a French style hors d’oeuvres.

This dish gets its name from ‘tapeno’, the Provençal word for caper. It is similar to the Mallorquín ‘tápera’ which you will see in the plural (‘taperes’) on locally produced jars of capers in supermarkets.

Elizabeth David, the most influential British food writer of the 20th century, introduced Britons to tapénade in her first cookbook, Mediterranean Food, published 72 years ago. 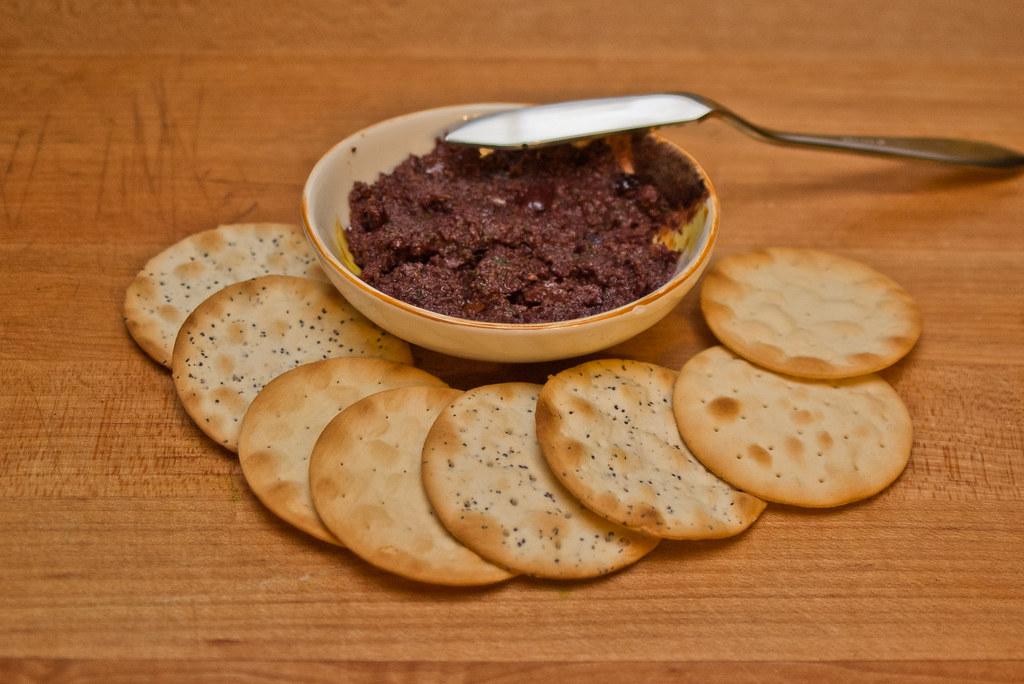 Those who bought her book in 1950 were unable to make many of the Mediterranean recipes because the ingredients weren’t available. But turning out a little dish of tapénade was within many people’s possibilities, even in those austere days when Britons still used ration books for goods they would soon be taking for granted.

For keen amateur cooks, especially followers of Elizabeth David, tapénade became a popular starter because it was pure Mediterranean yet so easy to do. Even beginners could impress their friends with a most acceptable version of this dish that was so synonymous with Provence and the Med.

When Britons made their first shy holiday forays into France in the 1950s, they frequently came across tapénade as one of the starters in fixed price menus. But they never saw it on the menus of British restaurants. 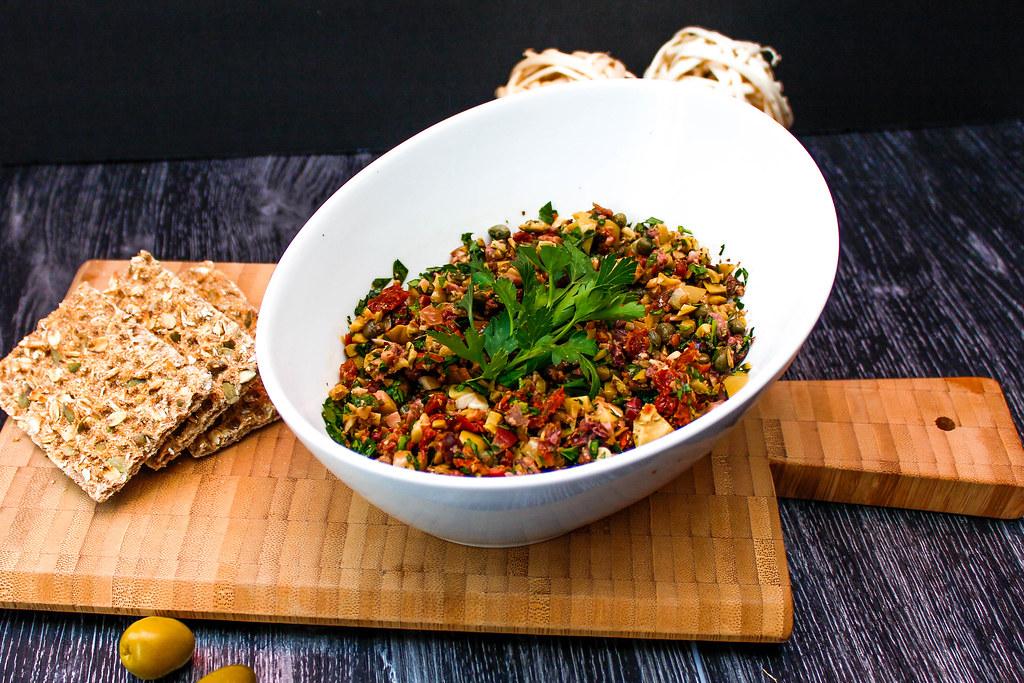 Trendy British cooks didn’t discover tapénade until the late 1980s when they started to serve it in a variety of ways, not just as a spread: they used it to add a bit of zing to grilled or steamed fish, for instance.

That brought the dish to the attention of food manufacturers and eventually little jars of black stuff masquerading as tapénade were on supermarket shelves. But even the best of them were never as good as the kind you can do at home.

Tapénade delights the tastebuds and can be used as a mid-morning snack on biscuits, as a starter for lunch or dinner, or as part of a more elaborate hors d’oeuvres.

To make enough to have in the fridge as a standby you will need: 500 grs pitted black olives, 100 grs tin of anchovies in olive oil, 100 grs of Mallorcan capers, 2 crushed garlic cloves (or more or less), black pepper and virgen extra olive oil.

Chop the pitted olives with a big kitchen knife or an hachoir. Add the crushed garlic cloves and pound them with the pestle. Snip the anchovies into small pieces and pound them until reduced to a paste.

Add the chopped black olives and roughy chopped capers and continue to pound until everything is well mixed. Add black pepper to taste and stir in the oil from the tinned anchovies. 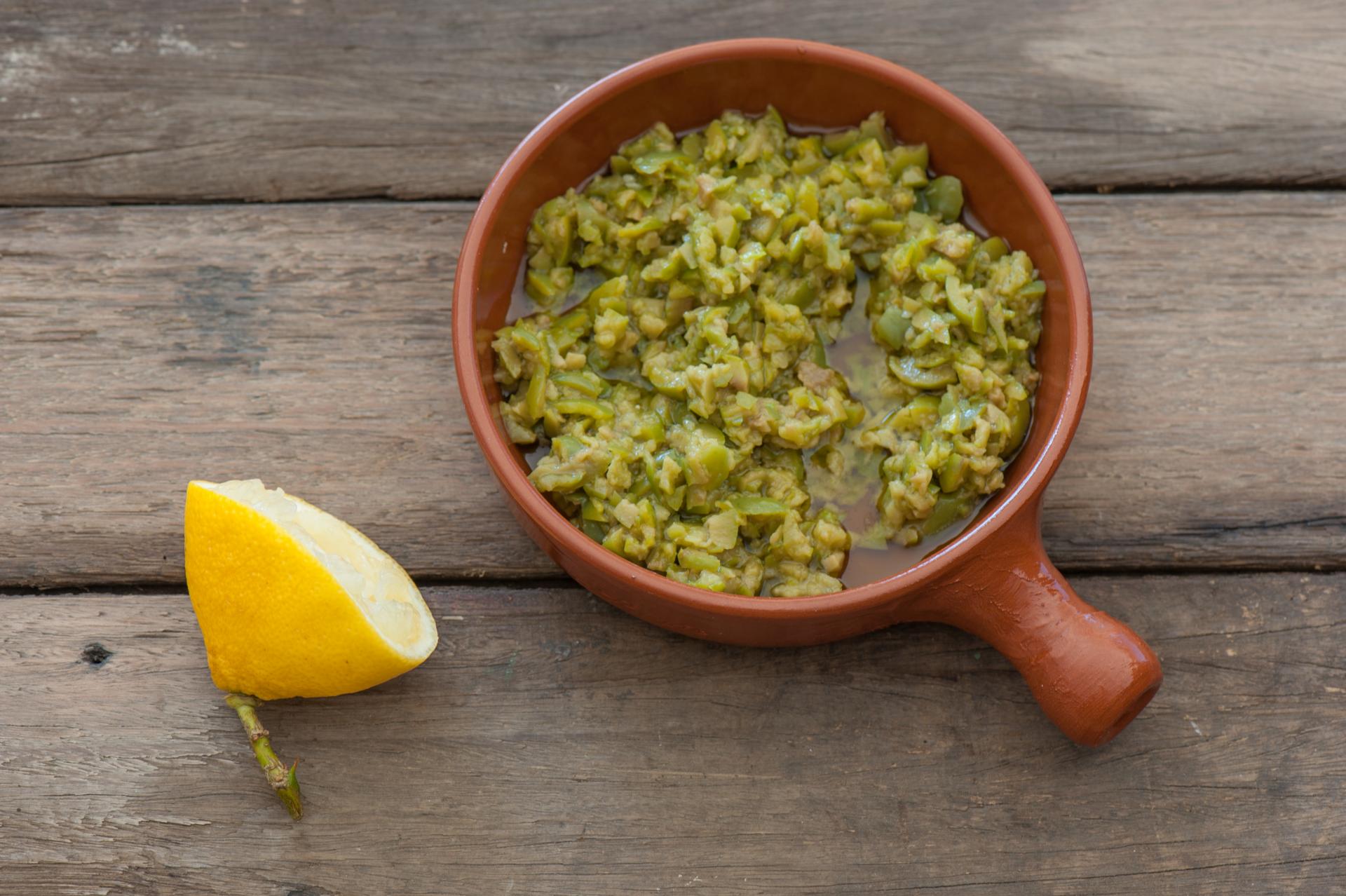 Drizzle in enough virgen extra olive oil to achieve a smooth mixture, stirring everything with the pestle. Transfer to a suitable container and keep in the fridge until needed.
For a first class tapénade it is essential to use the ‘panssides’ olives.

The black olives from Aragón, called ‘aceitunas aragonesas’, are also suitable but aren’t as good. Both can be bought the the supermarkets of El Corte Inglés. You can also get them at municipal and village markets.

Ordinary black olives from tins or jars are not at all suitable for an authentic tapénade because they wouldn’t give the right texture or taste.

Some cooks would add 200 grs of tinned tuna to the above ingredients and others even stir in a small glass of brandy.

But I do neither because the tuna lightens the tapénade’s essential blackness and this is one occasion when a glass of brandy does nothing to enhance the dish.

Some cooks stir in lemon juice (another ‘bleacher’ to be avoided at all costs) and others add some mustard. But these unnecessary additions detract from the essential earthiness of this dish.

Don’t be tempted to save time and blitz everything in a blender: the texture would be like baby food pap and that’s the last thing you want.

A rustic thick-textured purée is what you are aiming for because that is the hallmark of this dish. You should be able to see little bits of black olives and capers.

You can spoon the tapénade into ramekins and serve it as a pâté or a spread on toasted slices of baguette, savoury biscuits, toasted pita, Swedish crispbreads, Ryvita or deep-fried fingers of multi-cereal bread.

Another option as a starter is to spread the tapénade on a flattish rectangular or oval dish and stud the surface with hard-boiled eggs halved lengthways, cut side down.

A variation on this presentation is to arrange round the rim of the dish slices of hard boiled egg with yolk in the centre. Use a fork to mash the egg white without yolk and sprinkle it over the surface.

Other cooks decorate a flat dish of tapénade by roughly mashing whole hard-boiled eggs with a fork and then sprinkling it over the surface. The little bits of yellow and white egg look pretty against the jet black surface of the tapénade.

In restaurants all over Provence, as well as other parts of France, cooks use tapénade to stuff hardboiled eggs. This is one of the most popular starters on traditional fixed price menus.

To make this dish, shell the hard-boiled eggs, slice them in half lengthways and remove the yolks. Mash the yolks into the tapénade, but not too vigorously so that little bits of yolk create a decorative mimosa effect.

Serve them on a bed of dressed leafy greens, using any type of shredded lettuce, rocket, watercress, lamb’s lettuce, or one of the lettuces with a bit of colour such as lollo rosso or hoja de roble.

The Italian radicchio with its deep violet hue, either on its own or mixed with some other green leaves, adds a lovely splash of colour.

For an informal or impromptu luncheon, a thick tapénade is especially memorable when spooned into individual baby gem lettuce leaves.

These leaves are ideal for eating this way because they are short and sturdy and make a good support for spreads of all minds. But the leaves must be fresh and crisp.

You can also try them with hummus or other Middle Eastern mezze dishes such as mutabal, the Syrian-Lebanese aubergine dip made with tahina.

Crisp baby gem leaves have such a superb texture they are very special on their own and simply dressed with a herby vinaigrette — and, ideally, eaten with the fingers.
Baby gem lettuces, called ‘cogollos’ in Spanish, are available at most supermarkets and local fruit and veg shops.

But avoid those that aren’t kept on refrigerated shelves because they won’t be very crisp. The supermarkets of El Corte Inglés sell them in packs of three for only €1, which makes them one of the best buys in town.

Although a tapénade already has some pounded anchovies mixed into it, the anchovy taste pairs so nicely with that it some French cooks, amateur as well as professional, add extra fillets on the serving plate.

So they drape some anchovies over stuffed eggs, for instance, or cut them up into smallish pieces and scatter them over the surface of the tapénade.

This is a good moment to remind you that anchovies are what is known as a semi-conserve, which means they have been given only a light salt cure and are not subjected to high temperatures (over a longish period) that other canned goods get.

This is an essential part of the canning process because the heat kills off any bacteria strains that may be inside, thus giving the canned goods a long shelf life.

But anchovies in a tin or a jar don’t get this treatment, which is why they are displayed on refrigerated shelves with smoked salmon, caviar, roe and other items that haven’t undergone the complete preservation process.

This means that any anchovies we keep at home must also be stored in the coldest part of the fridge. And you must take note of the use-by date and keep to it.

So before buying a tin of anchovies look at the use-by date and store it in the fridge until you need it. And if you don’t get round to using it before the use-by date then bin it.
Another thing to take note of when buying anchovies is the price: you must avoid the cheap ones and pay a little more than you can afford. That’s the best way to ensure top quality.

Bear in mind that the cheap tins of anchovies don’t even contain anchovies — what you are getting is other little fish that abound in the Med and the Atlantic.

More than with most other products, with anchovies you get what you pay for. So pay more and get the better ones. You won’t regret it.