A heartening aspect of the crisis is the fact that fewer pets are being abandoned. The Son Reus centre in Palma said last week that the numbers were down by some 50%, adding that it has been getting requests for adoption - something that is a trifle awkward to arrange just at present.

Good news though this was, might there be a different interpretation? Taking the dog for a walk is a reason for breaking the confinement, one means of getting some exercise. Dogs have come into their own during the state of emergency, and don't some people just know it, such as a chap in A Coruña in Galicia. The Guardia Civil's attention was drawn to this individual and an advert he had placed on Facebook. For two euros an hour, citizens of A Coruña were being offered several dogs that they could take for a walk - a beagle, a spaniel, a terrier, a German Shepherd, a husky, a mastiff, a Pekingese, a Stafford.

The Guardia, as you can imagine, got in touch with this person. He was sanctioned for non-compliance with the state of emergency measures and with violating Galicia's animal welfare legislation. However, this initial fine didn't do the trick. The advert was repeated. He now faces a fine that could be in the several thousands.

In Madrid, meanwhile, the authorities have become aware that dogs appear to be being walked rather more often than they normally would be. The police are on the lookout for regular walkies, their fines books at the ready. In Majorca, Sencelles town hall has adopted its own dog-walking measure. Mayor Joan Carles Verd issued a decree last week in an attempt to stop some people abusing the permission to take dogs for a walk. For the time being, owners will not be allowed to walk dogs more than fifty metres from their homes. The police will probably be getting their tape measures out.

Living in peace and harmony

The CUP, Candidatura de Unidad Popular, are a radical left-wing, pro-independence, anti-capitalist and anti-monarchy party in Catalonia. One of their number is a chap called Joan Coma. He's a councillor in Vic, who has been of interest to our learned friends in the past. He was once under investigation by the Audiencia Nacional high court in Madrid for allegedly having attempted to provoke sedition at a town hall meeting.

Joan's latest contribution to harmonious coexistence came in the form of a tweet in which he offered his advice as to how to greet members of the armed forces (Spanish) who have been deployed in Catalonia on account of the state of emergency. If you see the army, he suggested, hug them tightly and cough in their faces.

Unrelated to the CUP or the crisis, a Vox councillor at the town hall in Madrid, Fernando Martínez Vidal, has offered his opinion of second deputy prime minister, Pablo Iglesias. "Jerk" was the moderate description. "Hijo de puta" was the stronger, Pablo having incurred Fernando's wrath by supporting the "citizens' cacerolada" against the monarchy - this cacerolada being when everyone (well, some) take to their balconies and beat the hell out of saucepans. A cacerolada would more normally take place in the streets, but as the streets are off-limits, balconies it must be.

"I'll tell you my freedom of expression, the one you say you exercise when you promote caceroladas against His Majesty The King. The difference is that you are deputy prime minister and you have promised loyalty. I don't owe you anything, jerk."

Irene is out of quarantine

Pablo Iglesias's other half, equality minister Irene Montero, exited coronavirus quarantine last week and gave an interview in which she was asked about the decisions to allow the International Women's Day marches to go ahead three weeks ago. 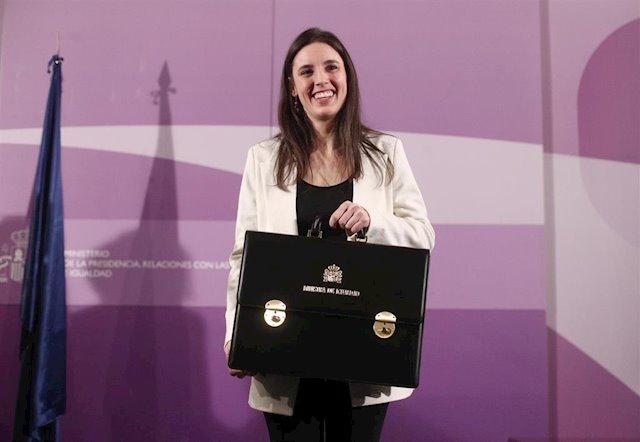 "We did what the experts and health authorities told us," she said, before berating Vox for their partisanship and "attack on women and feminism", the party having criticised the holding of the marches. Noting that Vox had held their convention on the same day as the marches, she went on: "The level of aggressiveness and hatred with which the far right attacks women does not correspond to scientific data."

Having got this off her chest, she acknowledged that the government has made some errors with regard to the pandemic. "It will be necessary to see which things have not been done well". Indeed, and it might be noted that an EU agency was advising member states against mass events six days before the marches took place. Still, as health minister Salvador Illa has pointed out, the decisions to hold the marches were ones to be taken at regional level and not by the Spanish government. The state of emergency hadn't been declared.

I WOULD LIKE TO GO FOR A WALK. BUT I WILL BE CONFRONTED WITH PILES OF DOG MESS!!!!.