One dish spot on, the other not quite right

The batter was thin and crunchy, the calamarines very tender. | Andrew Valente

Although I can be most critical when cooks get a recipe completely wrong, I am also most generous when they hit the nail on the head and produce a dish that is a delight from start to finish.

At the Gastrobar of the Hotel Saratoga in Paseo Mallorca I have eaten very well in the recent past, with the kitchen turning out interesting and well executed starters and mains and taking care to produce desserts that bring the meal to a nice finish.

But there were a couple of hiccups in a recent meal, one of them quite unnecessary, and that meant the difference between being awarded a 10 and going without. One was in a main course and the other in a dessert.

As I have mentioned in the past, when I look at a menu I am always searching for dishes that give me something to write about.

That means I can quite easily choose the same ingredient in two quite different dishes. That’s what happened last week.

As a starter I went for batter-fried calamarines, with chipirones in their ink as the mains. Although these names look quite distinct, both are little squid — but cooked in very different ways.

The chipirón name should be reserved for little cuttlefish, but in fish markets and restaurants they can be small calamares (squid). A calamarín is always a small squid…or should be.

The person who was responsible for the words on the menu had the chipirones in their own ink as being served with wild rice.

Gastrobar is trying to head up-market (and succeeding in many ways) but someone somewhere along the line should have noticed that wild rice (arroz salvaje, in Spanish) on the menu was an unnecessary faux pas. 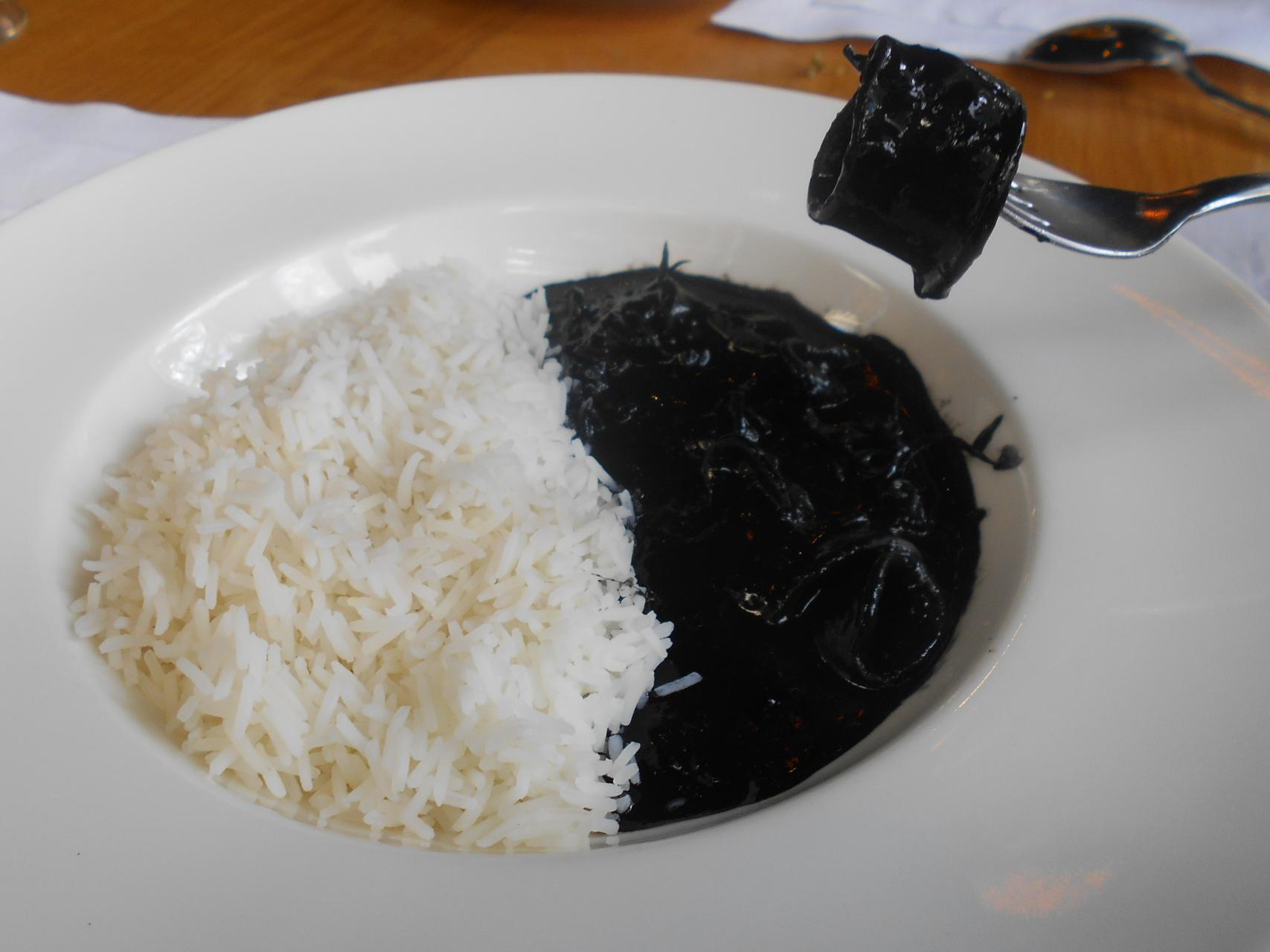 The long grain white rice was perfectly steamed (dry and with every grain quite separate) and the chipirones were deliciously tender and the sauce thick and tasty.

At €14.50, however, I thought the price was too high — or the portion too small. In restaurant dishes it’s not always easy to get everything right — which is why I always give a 10 when the cook produces a flawless dish.

Chipirones in their own ink is a relatively easy dish to get right — the sauce seems a bit exotic but it’s quite easily achieved and once you learn it you always get it right.
But deep-frying with batter is a much trickier operation and it’s easy to make mistakes — especially when one wants a thin crunchy batter in the Japanese tempura style.
The kitchen was on the ball with the batter-fried calamarines. The batter was in the best tempura style (brittle and tasty) and the calamarines were butter soft — you don’t always get that combination and when it’s there the dish is worth a 10.

Over the past 12 months or so I’ve eaten five desserts that were on the menu as ‘coulants de chocolate’. They were all very nice, with a good chocolate taste — but not one of them was a proper ‘coulant’. 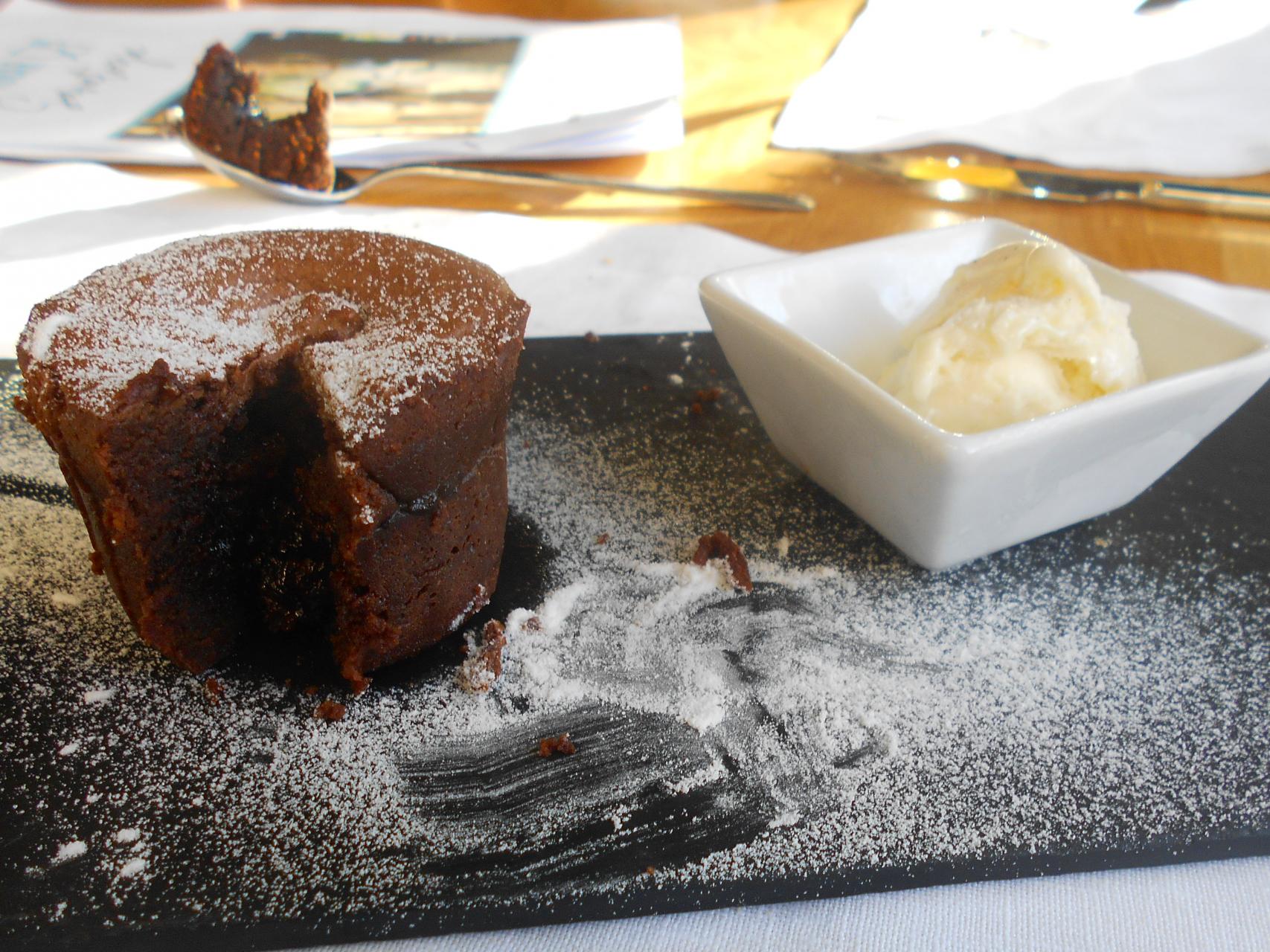 That word ‘coulant’ is French for flowing and a ‘coulant de chocolat’ (to give its name in French) is a small round spongecake made with chocolate and with a chocolate sauce filling.

When the ‘coulant’ is heated in the oven before being served, the chocolate filling melts — and flows out on to the plate when cut.

I’ve never made a ’coulant’ (desserts have never been my thing) but it all sounds easy enough — and I’m told there’s nothing difficult about making a ‘coulant’, especially as it is so well known, with video recipes on YouTube and elsewhere.

The ‘coulant’ and its origins are not disputed because it comes with a birth certificate on which is written the name of its ‘father’.

This little dessert was invented in 1981 by French cook Michel Bras whose Laguiole restaurant in l’Aubrac has three Michelin stars.

He wanted a simple little spongecake with chocolate in the interior that came gushing out when the sponge was cut. He spent a couple of years working on the recipe and when it was ready he patented the name and the method.

But even so, cooks all over the world copied his ‘coulant’, sometimes giving it a new name — such as ‘chocolate volcano’ because the chocolate filling spilled out like lava.

But there were no lava-like expulsions from the five so-called ‘coulants de chocolate’ which I was served on recent occasions in Palma restaurants.

Three of these ‘coulants’ were served cold, one was warm (but no chocolate flowed) and the fifth was more than warm (but not hot) and the chocolate sauce inside was thick and smooth but wasn’t runny enough to slide out on to the plate.

Although each of these ‘coulants’ was a complete failure according to the original Michel Bras recipe (his flow beautifully) they were all perfectly edible as little chocolate spongecakes.

Gastrobar’s was the fifth one mentioned above and was the best of the bunch. But that wasn’t good enough to call it a ‘coulant’.

If Michel Bras worked on the ‘coulant’ on and off for two years getting it right, I think restaurant cooks should spend a couple of days on their version. 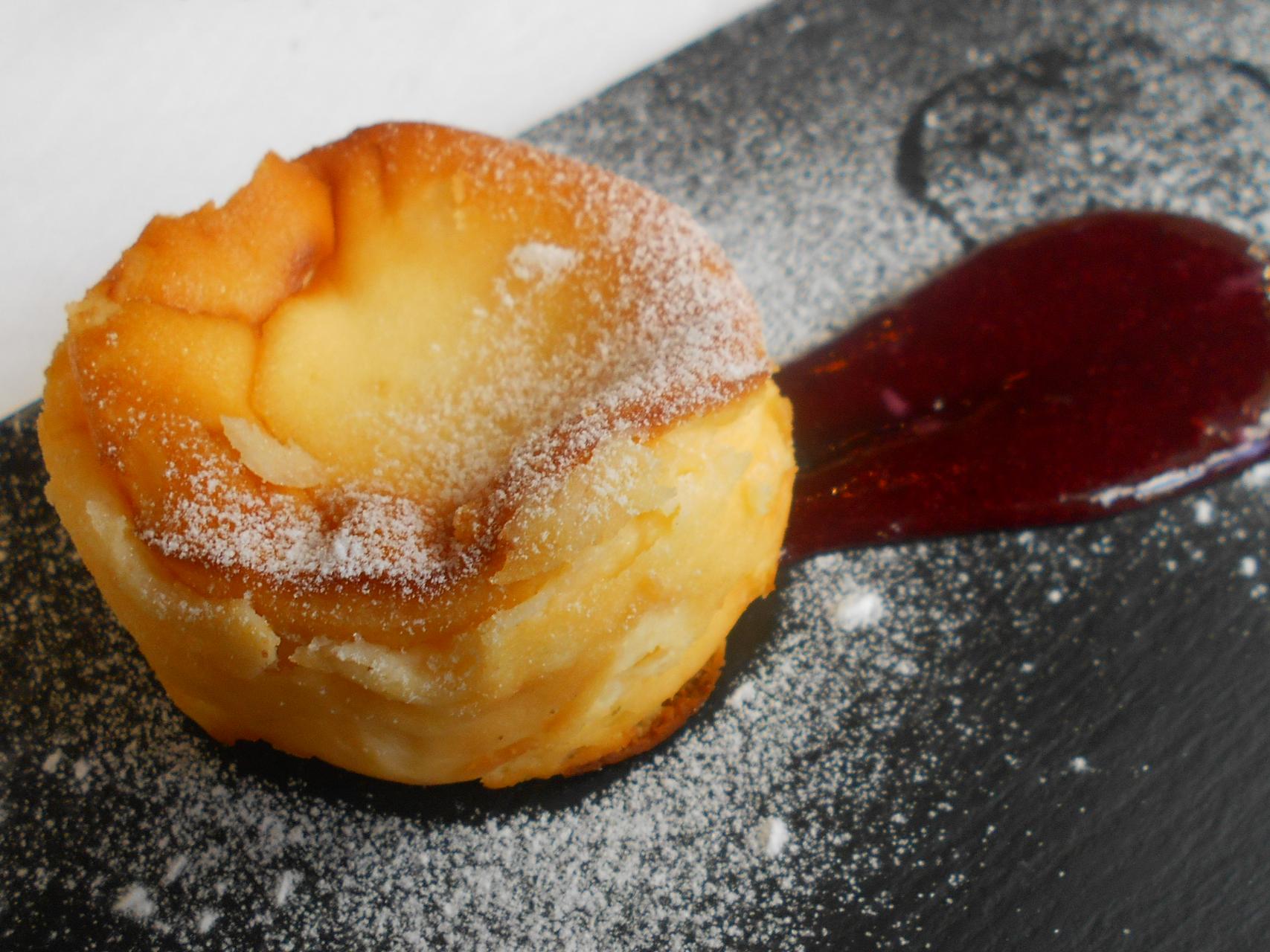 And if they can’t get the chocolate filling to flow then they should stop calling theirs a ‘coulant de chocolate’. 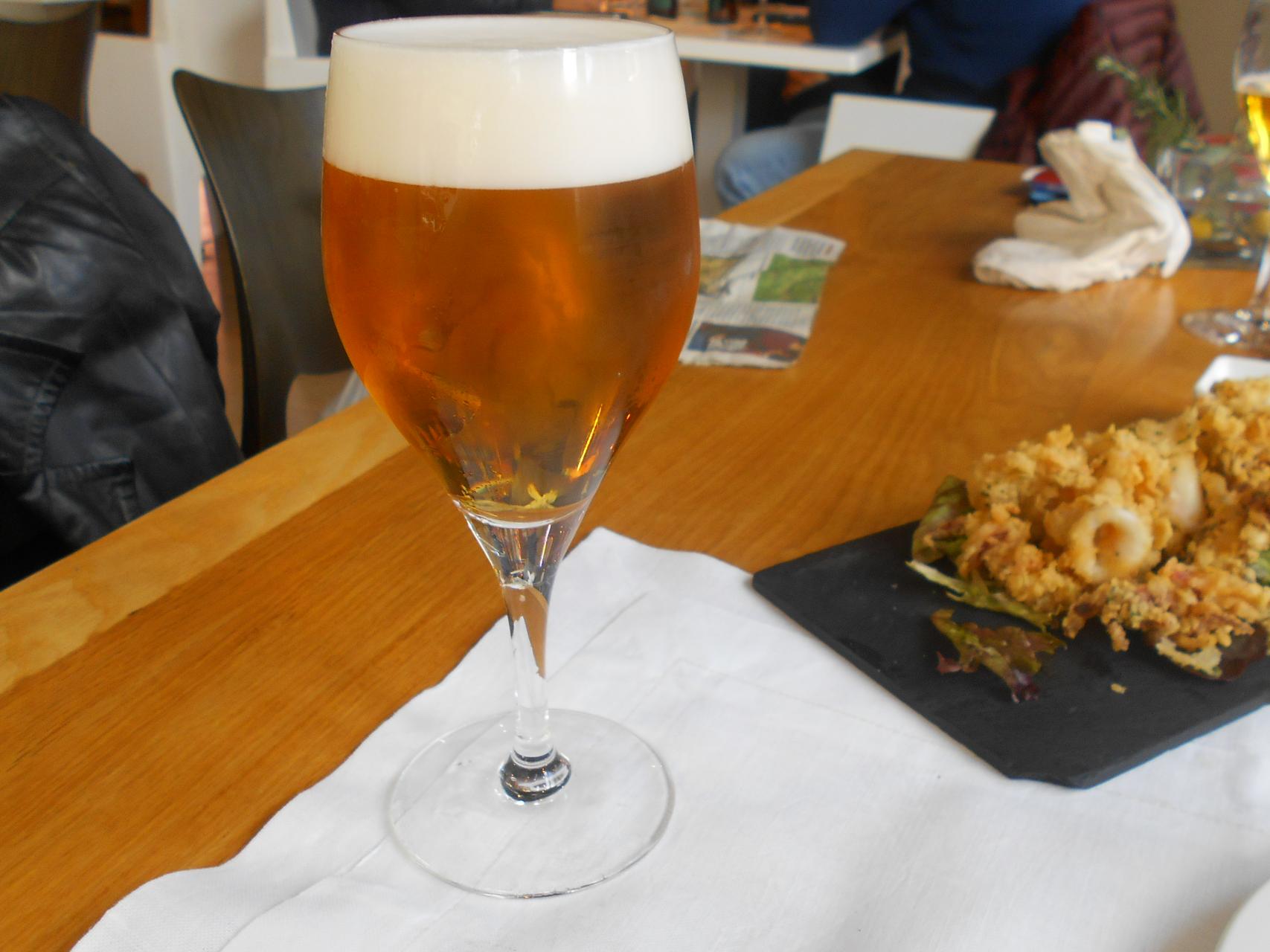 The Gastrobar cooks really take care of their desserts so the meal ends with a fanfare. The menu del día is served from Monday to Friday starting at 1pm with last orders at 3pm. I went on a Saturday, having forgotten that the menú del día is from Monday to Friday only, so we ate à la carte. The batter-fried small squid were amazingly tender and the batter was in the best Japanese tempura style: very thin, crunchy, full of flavour and oil free. At €9 it was a most generous portion and it received an immediate 10 rating.

Our mains was another member of the cephalopods family, chipirones, which should be small cuttlefish but are frequently tiny squid. The inky sauce was nicely thick and rich and the chipirones were also butter-soft. They were served with perfectly steamed long-grain white rice.

A little individual cheesecake had a lovely texture and flavour and a French coulant de chocolat was the best I’ve had in recent months but, like all the others, the chocolate filling didn’t flow out. But the taste was really superb.

Gastrobar, Hotel Saratoga, Paseo Mallorca 6, Palma. Tel:971-727240. Open every day, closing at 10.30pm. They have a terrace and indoor dining and drinking area. If you want to eat outside on sunny days, get there early or make a reservation.