Spain’s over-indulgence generally spills over into the kitchen during the Christmas period. Most households will happily spend small fortunes stacking up their larders in anticipation of several, large family celebrations. Prices of fish and seafood soar to exorbitant levels but it doesn’t seem to deter most Spaniards from enjoying firm favourites such as “Gambas” (prawns), “langostinos” (king prawns) “ostras” (oysters) and “Arroz con bogavante” (Spanish-style lobster with rice) throughout the festivities.

Christmas Eve (Noche Buena) is traditionally the night when Spanish families gather together to enjoy the big feast. I love to cook a well-made Mediterranean fish soup over the Christmas period. It is, quite simply a meal in itself, served with crusty bread, it needs nothing more than a nice crisp dry white wine for company. Every cook seems to have his own recipe for fish soup and all along the Mediterranean coastline hundreds of variations exist.

Here in the Balearic islands the markets always have a selection of weird and wonderful tiny rock fish that are grouped together and called "moralla". These tasty, little rock fish are perfect for flavouring robust fish soups and stocks. If small, they need no cleaning or scaling and can be thrown straight into the pot. Personally I prefer the soup to be light and full of flavour with the garnish added right at the end to ensure that the mussels, clams and fish etc are just cooked. As soon as the mussels and clams open the soup is ready to serve. I love to stir Rouille into my soup or top a little toasted bread with it. Make it the day before and the flavour will be more pronounced. Go to the market and buy the fish on the same day as your going to make the soup and take your time in the kitchen. Enjoy the pleasures of making one of the most classical and popular dishes in the world and you’ll be well rewarded for your efforts. Just make sure you make enough for second helpings.

Another favourite of mine during the Christmas period is “Pato a la sevillana”. A breast of duck is pan-fried, skin side down until crisp and then finished in the oven and served with a light sauce made of green olives, rosemary and tangy orange. My Spanish Christmas meal is often finished with “Torrijas”, a delicious type of eggy bread that has recently found favour in some of Spain’s top restaurants. It is extremely good with caramelized pears and even better when washed down with a glass of Cava (Spanish champagne). If you are planning to cook for friends, keep it simple, take your time and allow your own culinary creativity to flow freely. Cooking at home should be fun, and if we could all learn to enjoy the time we spend in our kitchens, the end results would far more rewarding. 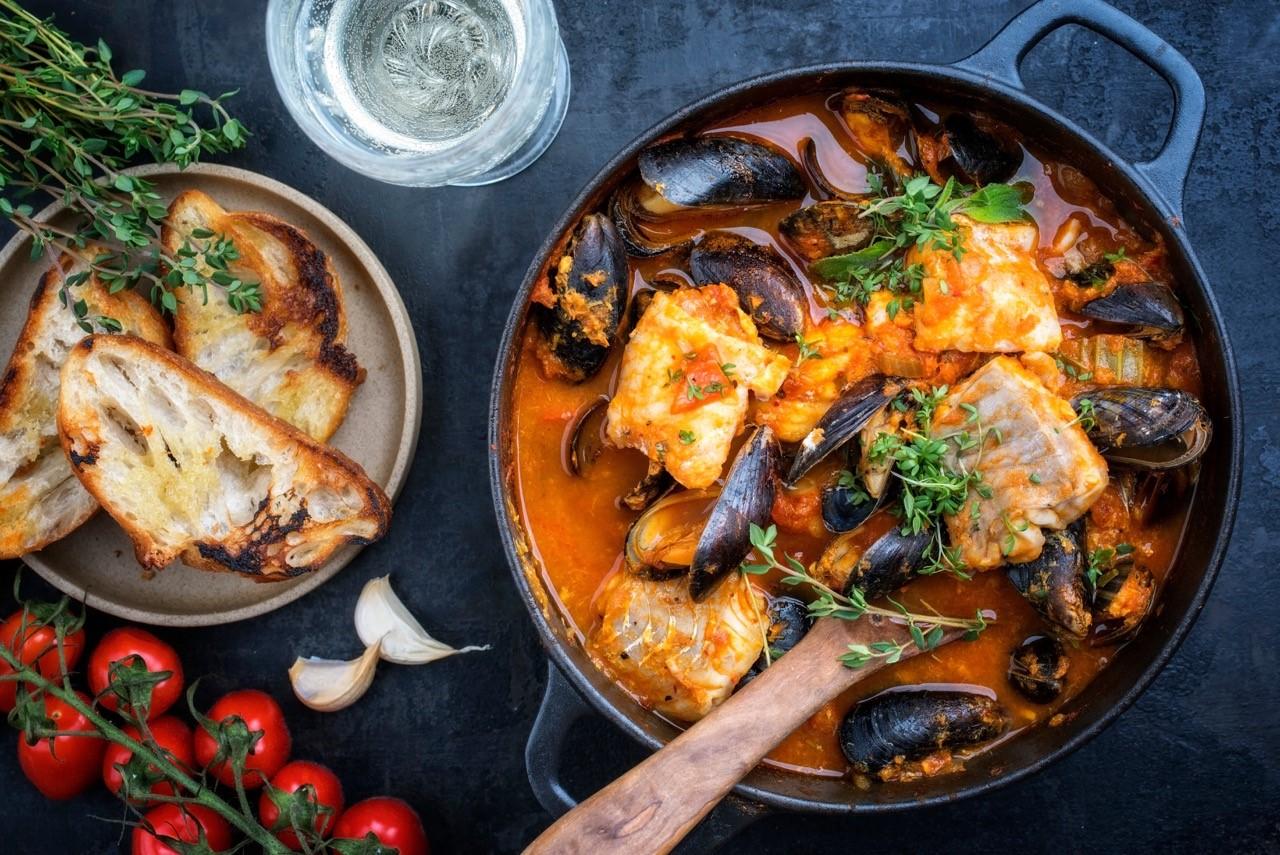 Heat the olive oil in a heavy-bottomed saucepan. Add the chopped onions, carrots, leeks and fennel. Cook slowly over a gentle heat until the vegetables start to soften. Add the garlic, saffron and tomatoes and cook for another 2 minutes.

Add the tomato puree and orange zest, then add the monkfish head, lobster head and rock fish. Increase the heat then add the brandy, vermouth, white wine and reduce the liquid by half.

Cover with fish stock and cook gently for 20-30 minutes.

Skim off the scum as it rises to the top and add cold water if necessary.

Remove the lobster and monkfish heads. Blend the soup to a puree and pass through a fine sieve.

Heat the fish soup in a clean saucepan. Bring to the boil, add the garnish and season to taste. Bring the soup to the table and serve immediately with rouille toasts. 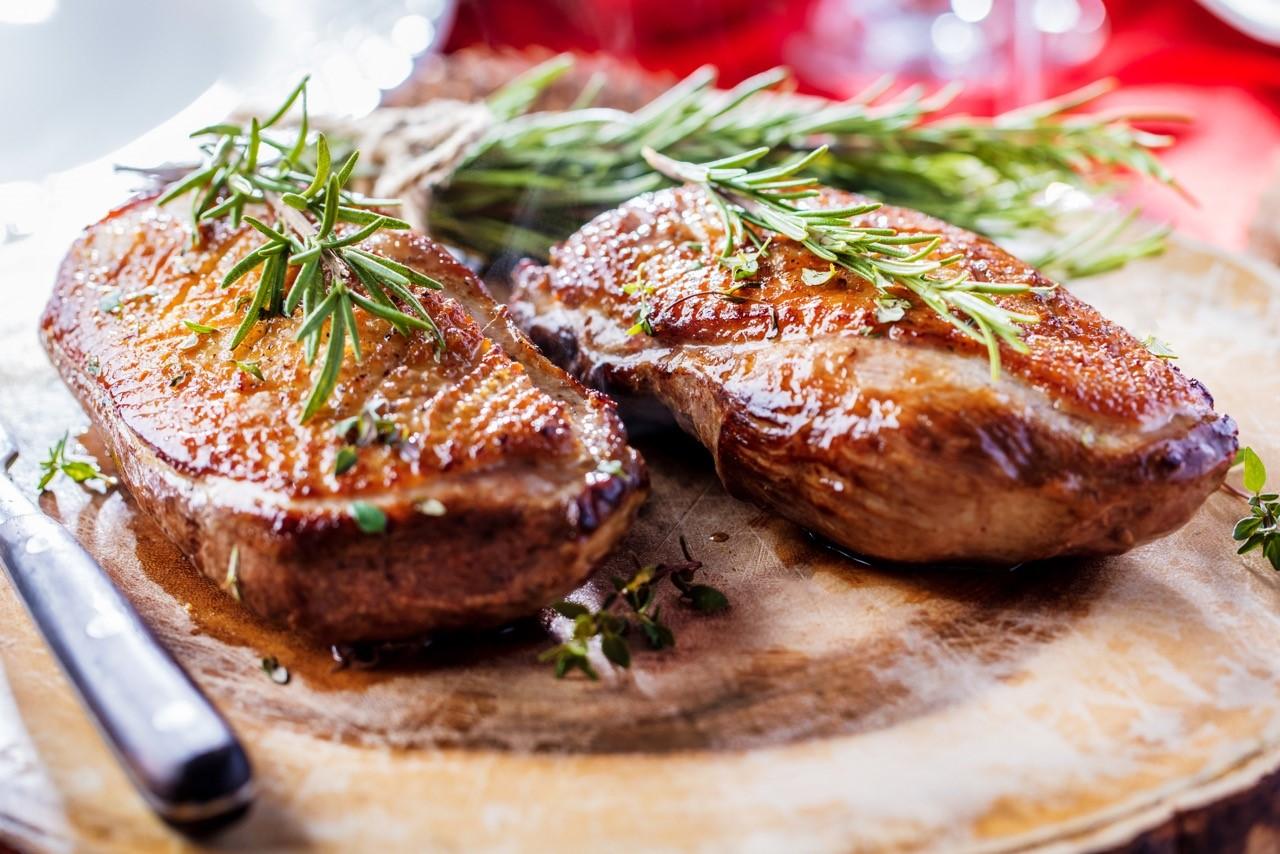 Grated zest of one orange

Roast them in a hot oven (200ºc/gas6) for about 6-7 minutes until just cooked and pink in the middle. Remove from the oven and rest in a warm place for 2-3 minutes.

Pour the brandy (stand back while the alcohol burns off) into the same frying pan and add the orange juice, zest, sherry vinegar, rosemary sprigs and chicken stock. Reduce to a thick syrup, then add the green olives, chopped parsley and season with salt and pepper. Spoon the cooking liquid over the duck breasts and serve immediately. 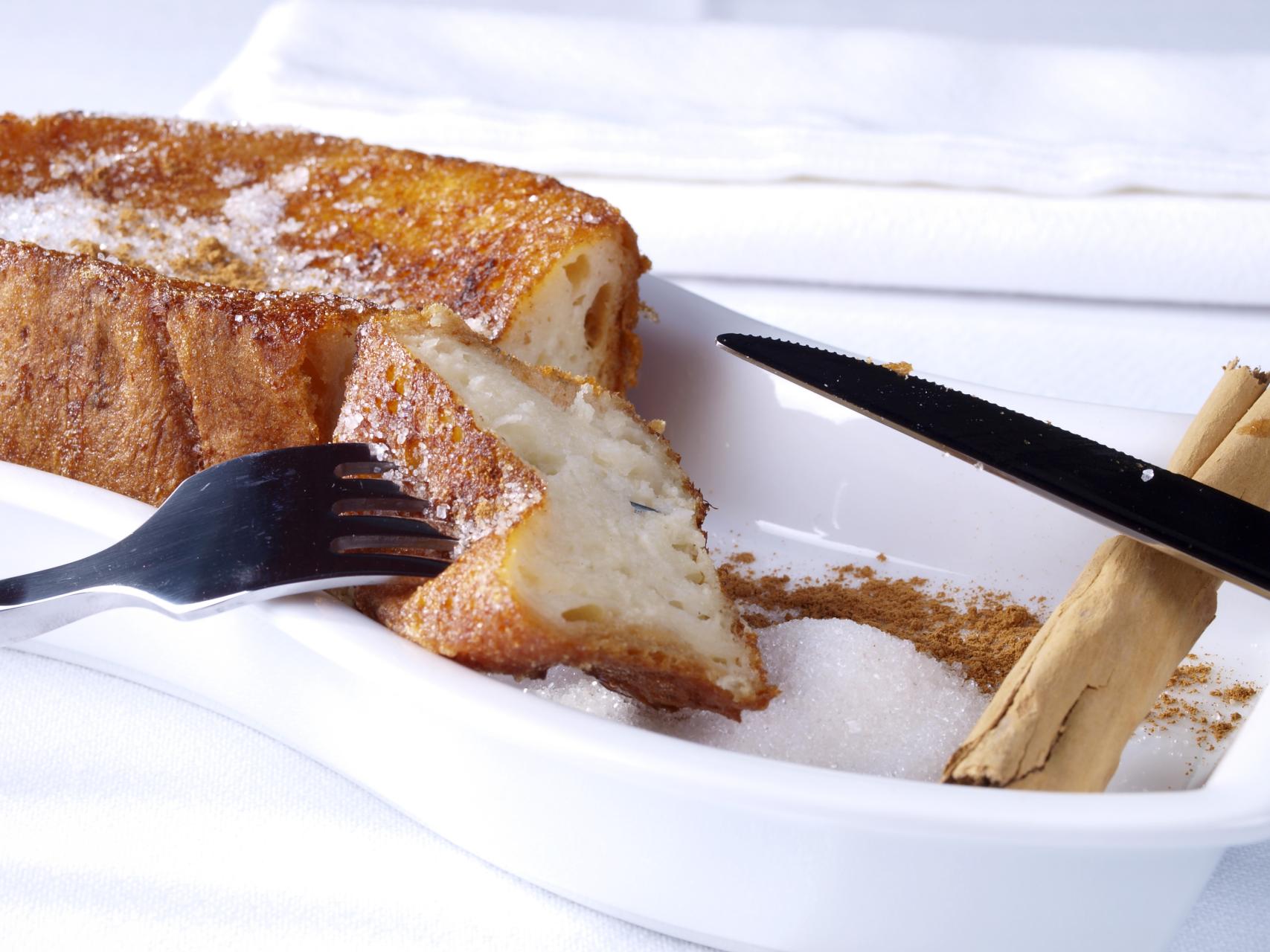 For the caramelised pear:

Whisk together the cream, sugar and eggs. Dip the bread into the egg mixture. Melt the butter in a non-stick frying pan and fry the bread until golden on both sides.

Drain over kitchen paper and sprinkle with sugar and cinnamon.

For the caramelised pears:

Heat the brown sugar and apple juice in a frying pan and boil until it starts to caramelize and bubble. Add the pear slices, remove from the heat and carefully add the calvados. Stir well.

Return to the heat to coat the pears evenly with caramel, and then divide them between 4 serving bowls. Sit the warm torrija on top and serve with a scoop of vanilla ice cream.