Harlot spaghetti was so nicely hot

The people in the countries of the Mediterranean Basin are so much more direct than the British. That means, among other things, they aren’t as politically correct as we are and have no use for euphemisms.

The ‘f’ word in Spain is a ‘j’ word and their ‘c’ word begins with the same letter — and both are used liberally in everyday conversation. Even by demure Majorcan women. And also children — and in front of their parents. I find it all rather healthy and refreshing.

A couple of weeks ago, when talking with an English friend who goes on horse-riding holidays, I asked her if women ever have an orgasm when in the saddle for some time and especially when going at a nice canter over rough countryside.

She looked straight ahead and said she wouldn’t know. “But have you ever had an orgasm?” I insisted. She said she hadn’t. Still looking ahead. I think I may have embarrassed her.

So when we went for a meal at Sandro because I needed two pasta pictures for an article in Brisas, Ultima Hora’s weekend magazine, I didn’t give her a translation of one of the dishes. It was spaghetti alla puttanesca.

This dish is a speciality in the Roma-Lazio region where pasta dishes are sometimes given the names of the trades and professions in the towns and villages. This is the area that gave us charcoal burner’s spaghetti (carbonara, which so few restaurants do properly), marketeer’s pasta (mercatero), fettuccine alla squarciarella (cut throat’s fettuccine) and also harlot’s spaghetti (alla puttanesca).

Rome is a very sexy city — in every sense of that useful word — so it makes sense that one of its most traditional pasta dishes should give the prostitute a place alongside the the ladies of Lazio.

However, I didn’t tell my horse-riding English friend that this famous Roman spaghetti had such a direct connection with the city’s prostitutes. I didn’t want to run the risk of embarrassing her again.

Spaghetti alla puttanesca is a well named dish: it bursts out of the plate with the deep red of a typical Italian tomato sauce spiked with black olives, it floods the palate with loads of taste and in the background there is a lovely touch of spicy heat.

Italian cooks, especially those in the south, are fond of adding small whole chillis to all kinds of dishes and also little flakes of dried chillis to pasta. But they are never heavy-handed.
Sandro is extremely good at going easy on the chillis: his puttanesca had a nice touch of prickly heat on the tastebuds but he kept it well in the background, which is where I like it to be.

There are some 380 recognised sauces for Italian pasta and at the last count there were more than 450 pasta shapes — which means we could eat pasta every day for some 500 years without repeating the pasta shape or the sauce. Yet most of us stick to the same two or three shapes and sauces. We should be more adventurous and look for the more unusual sauces and shapes. Sandro is a good place to try new pasta dishes because he always does an authentic version of everything he cooks. His puttanesca sauce was spot on for colour, taste and spicy heat. And his cacio e pepe sauce was the creamiest I’ve ever had, partly because he used pecorino cheese instead of parmesan. This ewe’s milk cheese has better melting point and at the right temperature becomes creamy instead of stringy. And he tossed the pasta in a hollowed-out cheese wheel, which was a nice novelty.

Ristorante Sandro, Calle Ramon I Cajal 9, Palma. Tel: 971-543002). Closed on Tuesdays. Sandro is an unusual cook in that he is the only one I know who makes his own bread loaves. The texture is incredibly soft and spongy. If you get there early you should have no difficulty in getting a table, but play safe and book on the weekends, especially Sundays for lunch. 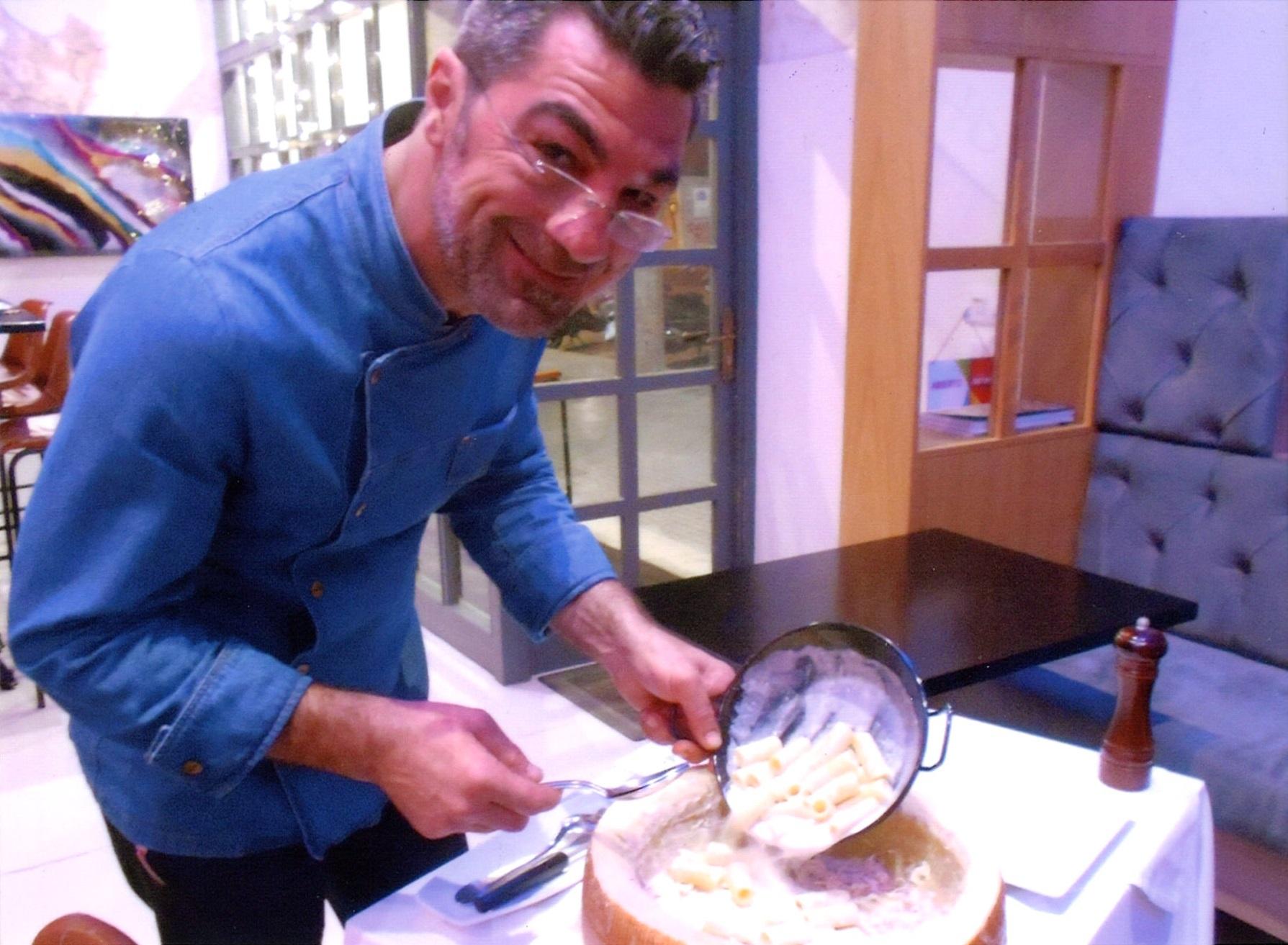 In Italian restaurants I always order pasta because I am interested in how Italian cooks handle those dishes that are most associated with ‘la cucina povere’, the very basic kind of cooking that Italy’s poor people were eating centuries ago.

This kind of Italian cooking is based on pasta, rice, polenta potatoes, small Mediterranean fish such as sardines, the cheapest cuts of meat, and every kind of offal imaginable — including some of the inside bits you know are there but never imagined anyone actually ate them. Testicles, for instance. And they’re delicious.

In the first paragraph I say that Italy’s poor people were eating ‘la cucina povere’ centuries ago, but the fact is that this poor man’s cooking is still popular today — and even the well-off are making and eating it.

In Italy, as in many other European countries, people are going back to their roots in many ways and that includes a hankering for food their grandparents ate on a daily basis.
Some of the dishes we see on Italian menus have come straight out of ‘la cucina povere’, but others have been fancied up and professional cooks (and some housewives) have adapted them for more plentiful times.

At Sandro’s I had one of the most ‘povere’ of Italy’s poor man’s cuisine. It is called ‘cacio e pepe’ which translates as ‘cheese and pepper’. A pasta done with grated cheese and sprinkled with black pepper to taste — that’s a very basic kind of ‘cucina povere’.

But like many other dishes in ‘la cucina povere’, this extremely simple fare that was originally meant to fill bellies rather than tickle tastebuds, is positively delicious.

The ‘cacio’ in this case is ‘pecorino’ which is made with ewe’s milk. It melts much better than parmesan so that when a little of the boiling hot cooking liquid is added to the pasta, the grated ‘pecorino’ turns into a nicely smooth sauce. Sandro added a luxurious touch: he mixed the pasta in a hollowed-out pecorino wheel. They never did that in the ‘povere’ days.

Norberto Ragusa | over 2 years ago

The cuisines of both Rome and Naples boast of a "spaghetti alla puttanesca". The difference is that in Rome anchovies are an ingredient whereas in Naples they are not. From the description it would seem that you were served the Neapolitan version. Both are delicious.