As the coronavirus crisis engulfs us all, some people’s thoughts inevitably turn to stockpiling food and supplies in the hopefully unlikely event of food shortages on our supermarket shelves. I’m definitely not advocating stockpiling, but in these worrying times I can’t help but feel that a few bags of dried beans in your kitchen cupboard act as some kind of security blanket. A big, comforting bag of beans gives you a veneer of self-sufficiency, but more importantly they can also taste delicious and be an endless source of inspiration!

My bean of choice right now is the humble chickpea; here in Spain they are known as garbanzos, they are one of the oldest consumed crops in the world. In fact, they have been a part of traditional Mediterranean diets for over 7,500 years and still today; chickpeas remain one of the most popular legumes across nearly every continent throughout the world.

The most famous chickpea dish is undoubtedly hummus b’tahini (‘hummus’ simply means ‘chickpeas’ in Arabic). It consists of chickpeas, tahini (sesame paste), garlic, olive oil and lemon. Although loved the world over, it has become a source of contention between all the nations who argue that it was on their land that hummus was born. Scholars have long been unable to determine the precise origins of the thousand-year-old spread and everyone from the Lebanese to the Turks to the Syrians have tried and failed to claim it as their own and the hummus war still rages on today.

But there’s so much more to chickpeas than just hummus. They can be used in salads and stews and combine really well with so many foods. Give a humble tin of chickpeas an injection of Indian spice and add them to curries or try my Moroccan inspired octopus and potato stew recipe from my new cookery book! 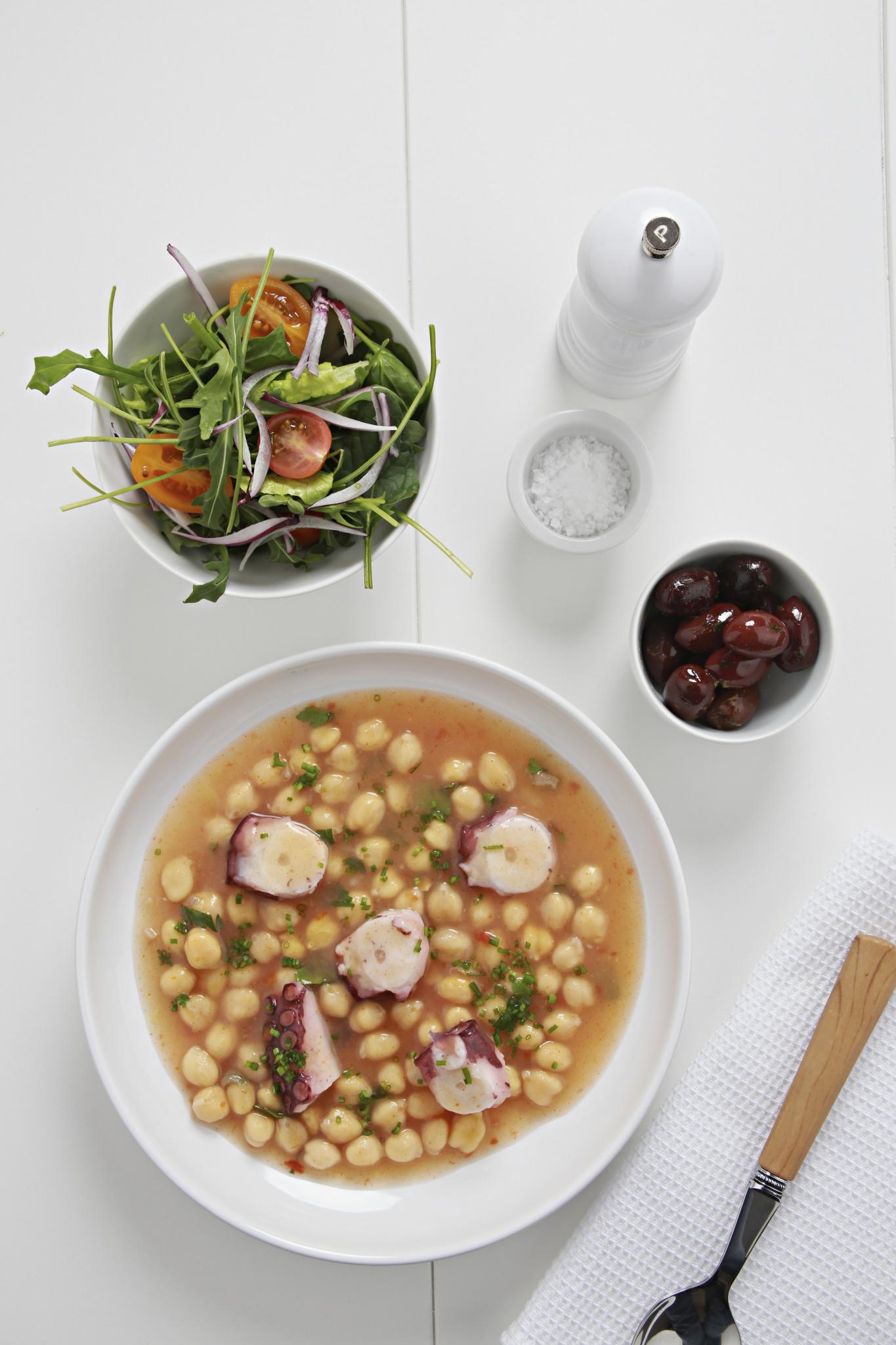 Heat the olive oil in a large heavy saucepan over a low–medium heat, add the onions, peppers and garlic and cook until the onions start to soften. Add the octopus, paprika, cayenne pepper, ras el hanout and cinnamon stick, cover with the vegetable stock (bouillon) and chopped tomatoes and simmer gently for about 30 minutes.
Add the cooked chickpeas and continue to simmer for about 15 minutes.

Use a ladle to skim off any fat or impurities that rise to the surface during cooking.
Season the stew with salt and pepper, sprinkle with chopped parsley and coriander (cilantro) and serve with crusty bread.

To make the meatballs, thoroughly mix the pork, cumin seeds, ground almonds, garlic and parsley in a large bowl, season with salt and pepper, then shape into balls. Chill in the refrigerator for at least 30 minutes.Heat a little olive oil in a frying pan (skillet) over a medium heat. Fry the meatballs for 4–5 minutes, turning from time to time, until golden brown all over and cooked through. Set aside and keep warm. For the spiced pumpkin and chickpea stew, heat the olive oil in a heavy saucepan over a low-medium heat and add the onions, garlic, chilli, ginger and spices. Stir to combine, cover and cook gently for 2–3 minutes until soft.

Add the diced pumpkin, tomatoes, harissa paste and chicken stock (bouillon), season with salt and pepper, and simmer for 20 minutes. Add the chickpeas and meatballs to the stew and simmer for a further 5 minutes. Adjust the seasoning if necessary and sprinkle with chopped coriander (cilantro) to serve.