Why early birds get best lechona

The loin and its large area of crunchy skin. | Andrew Valente

You’d think that with lechona al horno (roast suckling pig) being one of Majorca’s most emblematic dishes, we’d be able to find really good versions all over the island. Sadly, that is not the case.

Over the past 10 years I’ve had some superb lechona in restaurants but they were the exception rather than the rule.

Two years ago I wrote about a restaurant renowned for its Mallorquín cooking. We had a bacalao (salt cod) dish that was perfect in every way (and therefore worth a 10) and a piece of lechona that had obviously been roasted the day before and reheated.
I didn’t write about the lechona in the general review, but at the end of ‘the verdict’ section, having said the bacalao was sheer perfection, my only lechona comment was: “I cannot say the same about the roast suckling pig. It was overdone, dry and tasteless. I expected a bit more TLC from La Fonda.” 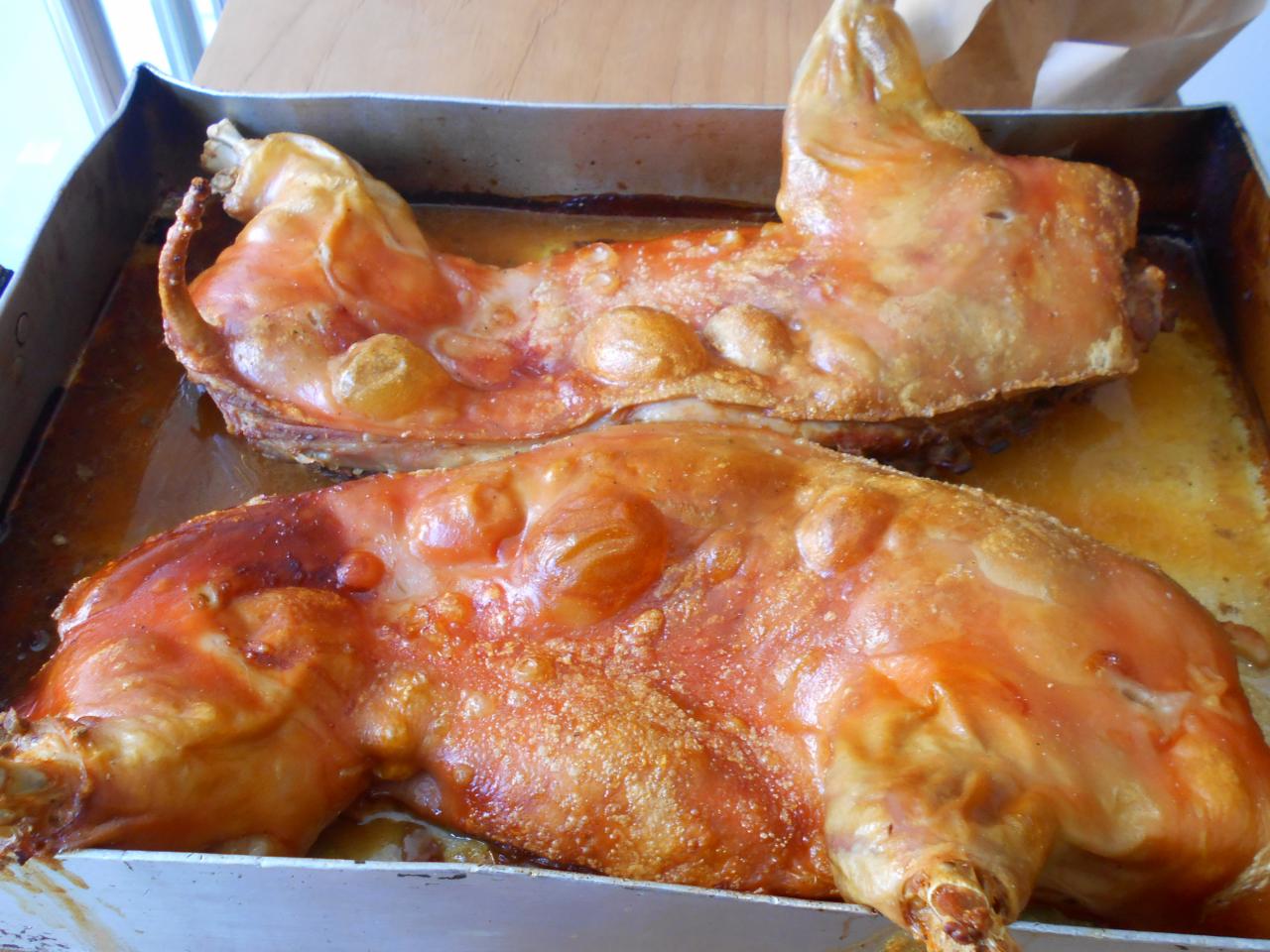 Comments similar to that have been quite common in recent years. It’s as if the places that used to do fine roast suckling pig had started to rest on their laurels.
I had actually reached the stage where I stopped ordering roast lechona because I didn’t want yet another disappointing version. The main fault was that the lechonas were overdone, the meat dry and stringy because the collagen, nature’s glue, had melted away.
Four months ago I went to Sa Goleta where Josefina Pérez does a €12.50 menú del día. It is probably the island’s best value-for-money menú. I certainly don’t know of one that beats it for variety and consistent high cooking standards. 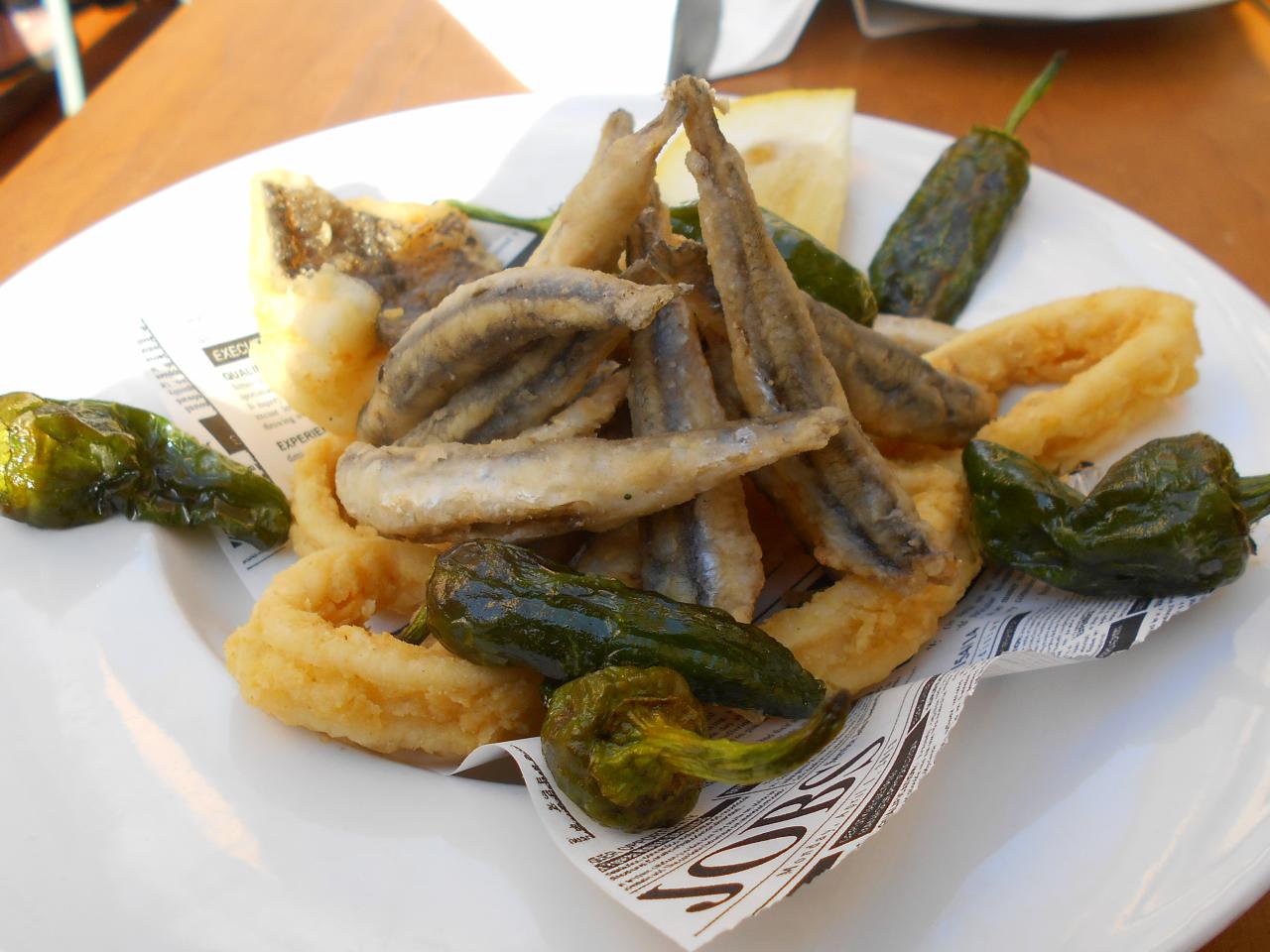 That day Josefina’s husband Leo, who keeps everything under control in the dining room, told me they now do a roast suckling pig every day and you can have it on the menú del día for a €4 supplement.
I ordered a piece and it was the best restaurant lechona I’ve had in years. The skin was crunchy, the silky succulent texture of the meat could be cut cleanly with a knife…it was perfect.

Josefina is a fine cook, but is her roast lechona always perfect? I returned last week to find out. This time I had it à la carte, a piece from the leg and another from the loin, cut off soon after the lechona came out of the oven.

Every square centimetre of the skin, even the large slab on the loin, was crunchy and stayed that way until the last bite. The meat on the leg and the loin (the fillet), was incredibly juicy and cut beautifully. This lechona was another 10.

After trying the meat and skin from both cuts, I suddenly realised that part of the reason Josefina’s lechona is sheer perfection is that we were eating it soon after it came out of the oven. The moral: the early birds get the best lechona.
Do as we did: get there at 1pm, which is when they open, share a small starter and then get to work on one of the first cuts from the lechona. You’ll love it.

In the majority of Palma restaurants, especially those featuring the menú del día, they give little time and effort to desserts and mainly serve bought-in flans and yoghurts. It makes that section of the menu easy-peasy.

Josefina has a few bought-ins but she also finds time to do her own desserts, including tarts of various kinds and brownies or carrot cake. When the waitress said carrot cake was on the list I ordered it immediately.

I know from past meals at Sa Goleta that Josefina knows how to give her sponges, brownies and carrot cake the right degree of moisture and she also produces lovely rough textures. 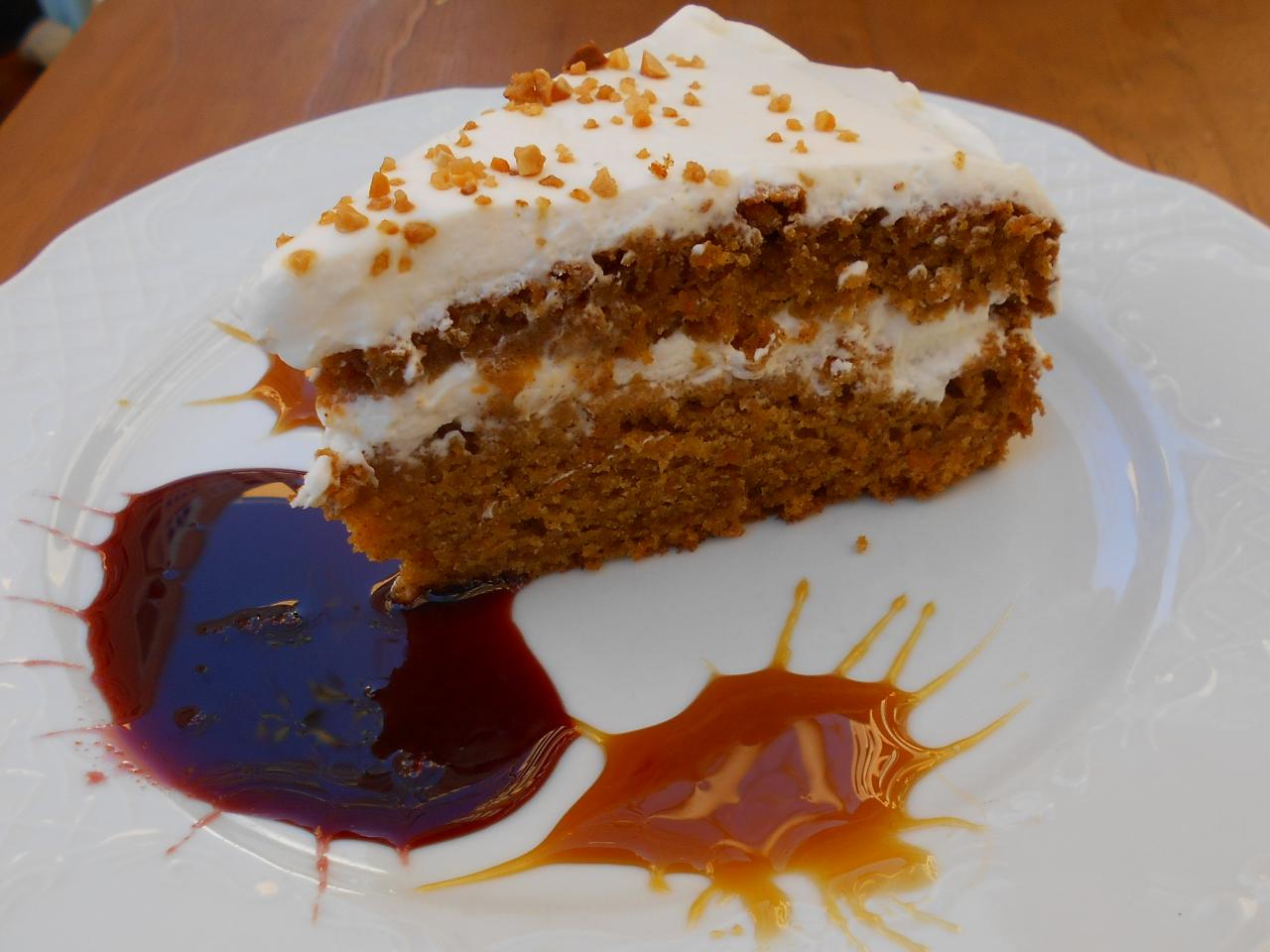 Moisture and texture were right up front with this carrot cake and you could taste the carrots. It was tad too sweet for my taste but I still thoroughly enjoyed every spoonful.
The menú del día at Sa Goleta always offers seven or eight starters, the same number of mains and several desserts. The dishes keep changing and you never see the same menu two days running.

On the other hand, some dishes are extremely popular with the regulars, so you’ll see them on various occasions during the month. If paella is one of the starters be sure to order it, especially if you’re an early bird because the paella will be freshly made — and at its best.

Josefina specialises in paella, so if you’re in that state of mind you can order one of the dozen specials on a blackboard at the door. Josefina is from Alicante, home of some of Spain’s best rice dishes, so she knows her way round a paella pan. 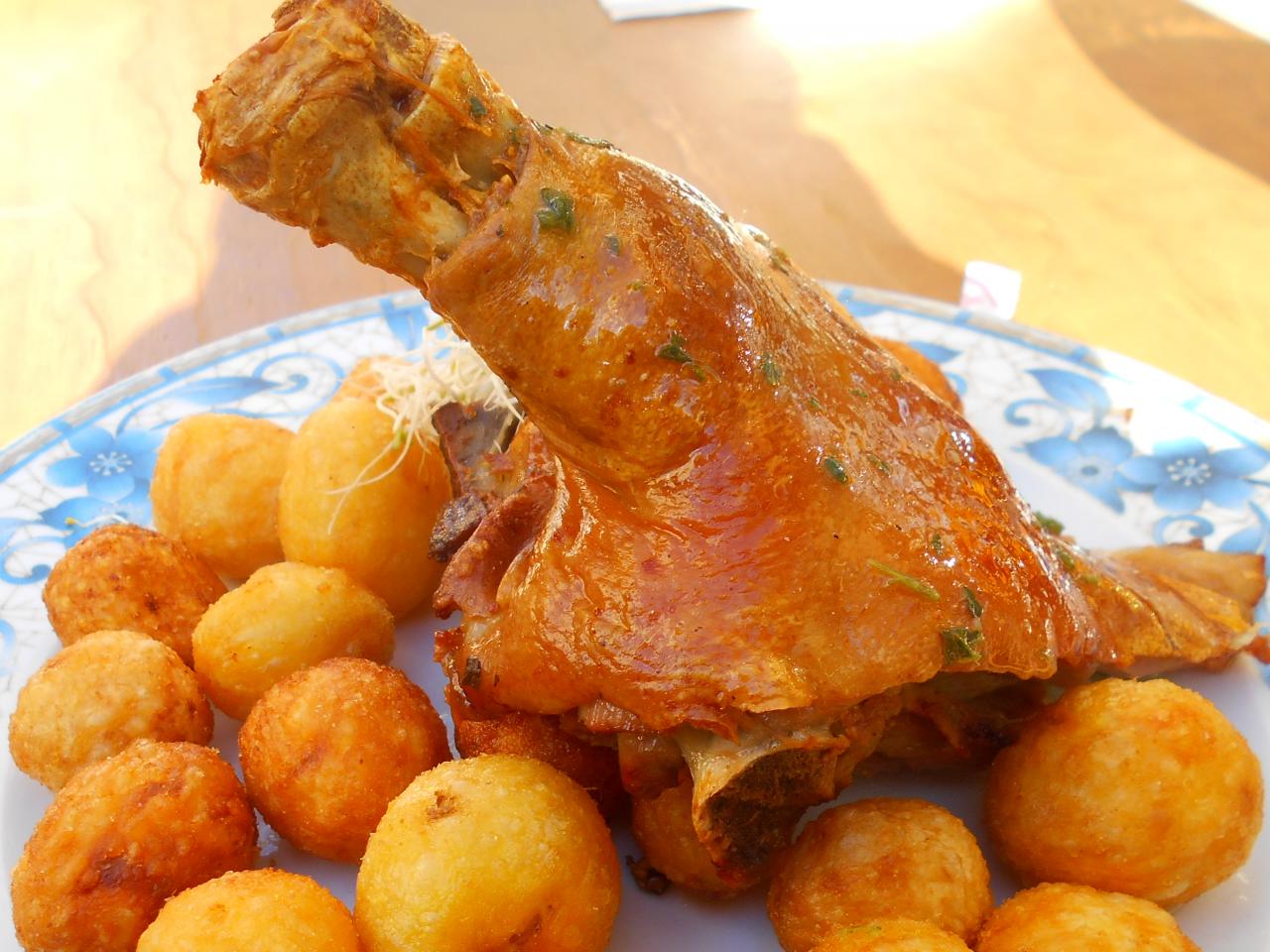 The only restaurants open at the moment are those with terraces or pavement space. It can get rather cold during the meal so be sure to wear a winter jacket that keeps you warm but also gives you a bit of flexibility as you eat.

There is another good reason for being an early bird when you go to Sa Goleta. When you arrive at 12.50 the sun (if there is some sun that day) is shining directly on the pavement tables, so for the first 20 minutes or so you’re getting some very nice heat.

Josefina’s lechona is so expertly roasted and so delicious that even if you have it on the menú del día for a €4 supplement or à la carte at €14.50, you are getting a super bargain. I don’t know any restaurant in the Palma area whose lechona al horno is in the same league as Josefina’s.

But to eat it at its best you must have it as soon as possible after it comes out of the oven. That means getting there at 1pm. No roast lechona (not even Josefina’s) will be as succulent if it has been out of the oven for two hours or more. So be an early bird. They always have a good choice of desserts, some made by Josefina, some bought in. You should always ask about the ‘postres caseros’ (those Josefina makes) and order one of those. 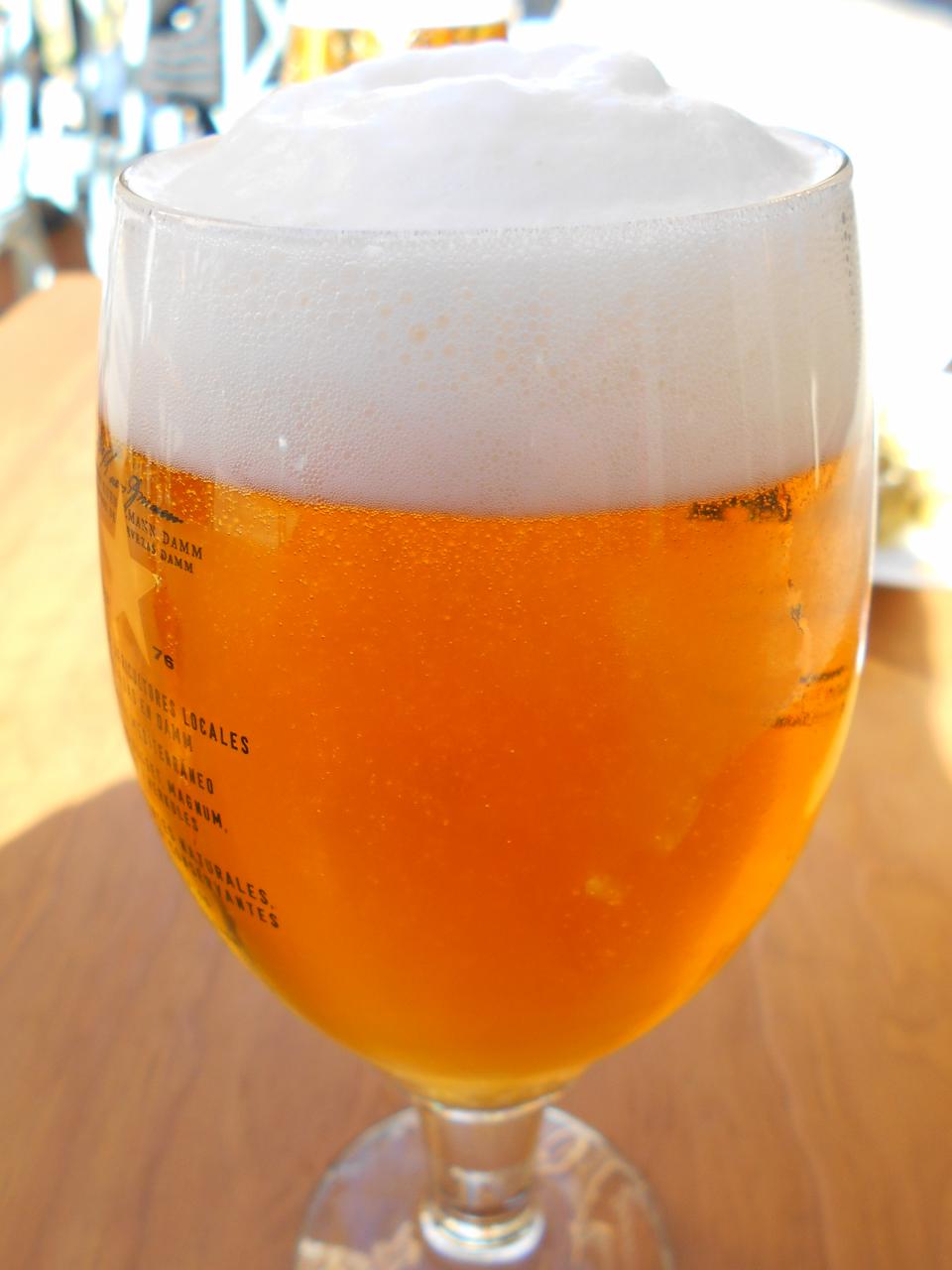 Open every day for lunch. They have only a few tables on the pavement, so be sure to make reservation — and book the table for 1pm so that you’ll be an early bird and get the best lechona. They also specialise in paellas and Josefina even finds time to do takeaways.