The restaurant review: There’s a Greek Taverna in town

The courgette fritters were most successful. | Andrew Valente

It all came as a big surprise. A friend told me of a restaurant called Palet that did a good menú del día at €11.90. So we went to try it. It’s in a very busy part of town, up from the Intermodal station at Plaza España.

I was expecting the typical menú del día based on Spanish and Majorcan traditional dishes done by a competent cook (usually a woman) and great value for money.

But when we arrived the huge surprise was that Palet is a Greek taverna. It opened three years ago and is run by cook Stavros Gkouliamanis who is also co-owner. As far as I know, there isn’t another Greek restaurant in Palma (or any other part of the island) so this was a most welcome and unexpected find.

Although Stavros has many Greek dishes on the menu, Palet isn’t a completely Greek place — it also caters for the Mallorcans and Spaniards in that neighbourhood. But for lovers of Greek food, like myself, there’s a nice selection of dishes to keep us happy.

As I was in the middle of writing about hummus for Ultima Hora, the discovery of Palet was most opportune because I was able to get a picture of their hummus to illustrate the article.

Although every Greek restaurant I have visited does hummus, it is not a Greek dish (neither is pita bread). Serious books on Greek food, such as Greek Cookery by Joyce M. Stubbs (1963) and Rena Salaman’s Greek Food (1983) simply don’t mention hummus — or pita bread. 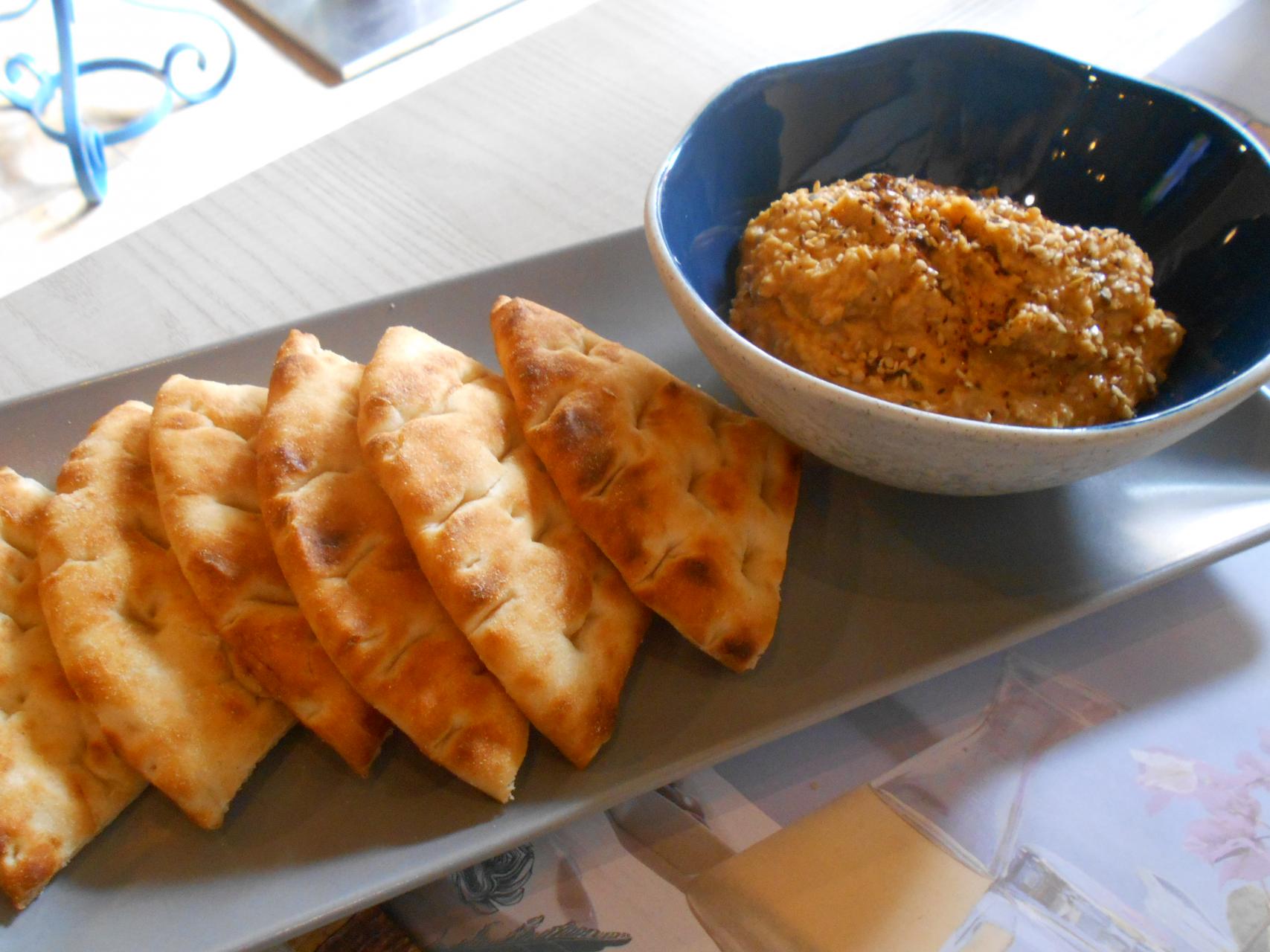 Turkish-Cypriot immigrants first introduced hummus into England when they opened restaurants in London in the 1950s. In a country where war-time rationing was still in force and Mediterranean food was almost unknown, the Turkish-Cypriot hummus was exotic — and an instant success.

The word hummus in Arabic means chickpea and in restaurants all over the Middle East hummus is a spread or dip made with mashed chickpeas, olive oil, cumin, garlic and lemon juice. 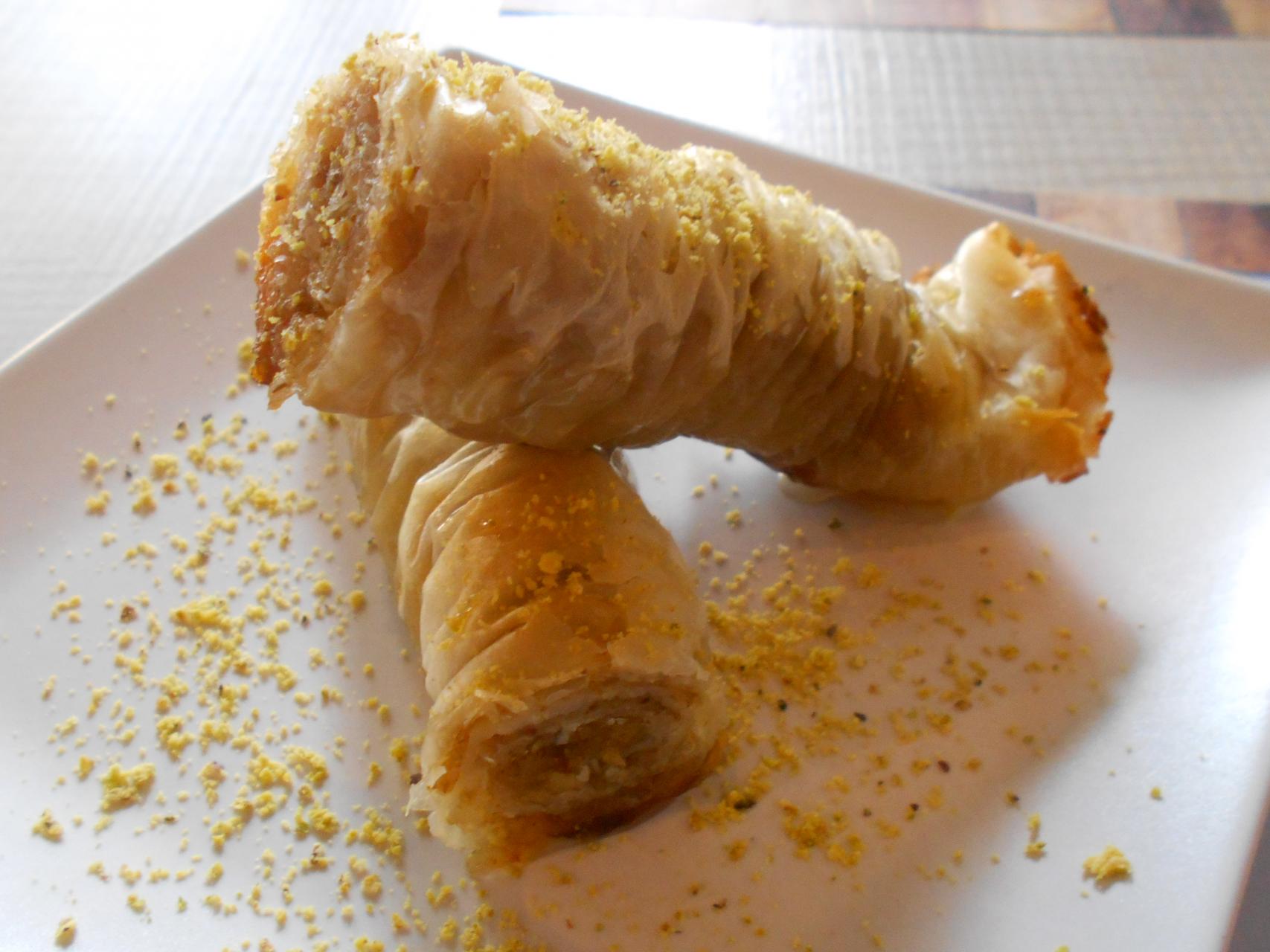 But the Turkish-Cypriot restaurant cooks in London also added tahina paste, making it a dish called hummus bi tahina. It is native to Syria and Lebanon, but it spread to all Middle Eastern countries and today it’s especially popular in Israel and Jordan.

Tahina is made with toasted sesame seeds pulverised to a mealy fineness and mixed with sunflower oil to produce a thick paste that adds lots of earthy flavour to a simple chickpea hummus.

As soon as the Palet hummus was on the table we could tell by the colour, and then the taste, that Stavros serves a hummus bi tahina. He had also sprinkled the surface with sesame seeds. 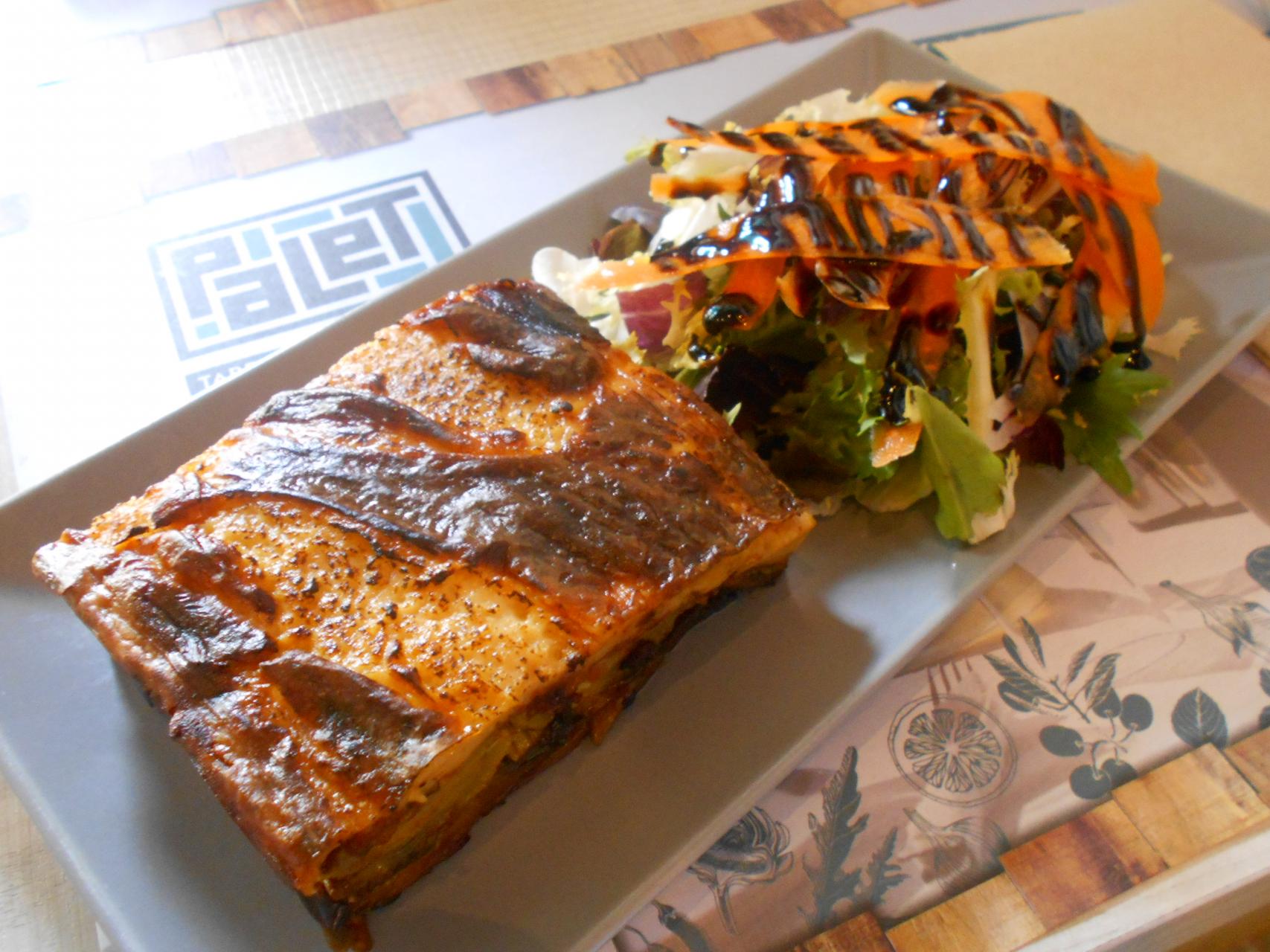 He serves it with his own pita bread. You know he bakes it because it is quite unlike the pita bread in supermarkets.

As always in Greek restaurants, portions are generous and this hummus could be shared between three, making it an economical starter.

Odyssey of Greek cuisine in Mallorca

In the mid-1960s there was a surge of Greek restaurants in London that was partly due to the success of Zorba the Greek (1964) and its unforgettable score by Mikis Theodorakis.
When the Akropolis, Majorca’s first Greek restaurant, opened in Playa de Palma 30 years later, the heading on my review was: ‘Greek cooking finally puts down roots on the island.’
But those roots didn’t take.

The restaurant review: A vegetable paella came to the rescue

Our third Greek restaurant didn’t arrive until nine years later. It had the right kind of name, La Taberna del Griego, and was in the centre of Palma.

It was owned by a Greek family and the pretty daughter in traditional dress and the father did energetic folk dances and smashed plates against the floor in the traditional Greek style. I thought it would be a great success but neither it nor the Akropolis celebrated their first anniversary.

In between these two was a place in Festival Park called El Greco (opened in 2003) that was still going in 2008, but I don’t know what happened to it. Another place in Playa de Palma opened and closed so quickly I didn’t get to try it.

The only other Greek restaurant I know of was in Calle Fábrica run by a family without a word of Spanish. It closed within three months.

Palet has been going for three years and I think cook Stavros Gkouliamanis may have hit on the right formula: enough dishes to keep Greek food fans happy, while catering for neighbourhood residents.

Greek food is simple, rustic and robust with strong influences from the Middle East and Turkey — the Turks occupied Greece for almost four centuries — and later from Italy, which can be seen in those baked macaroni dishes. 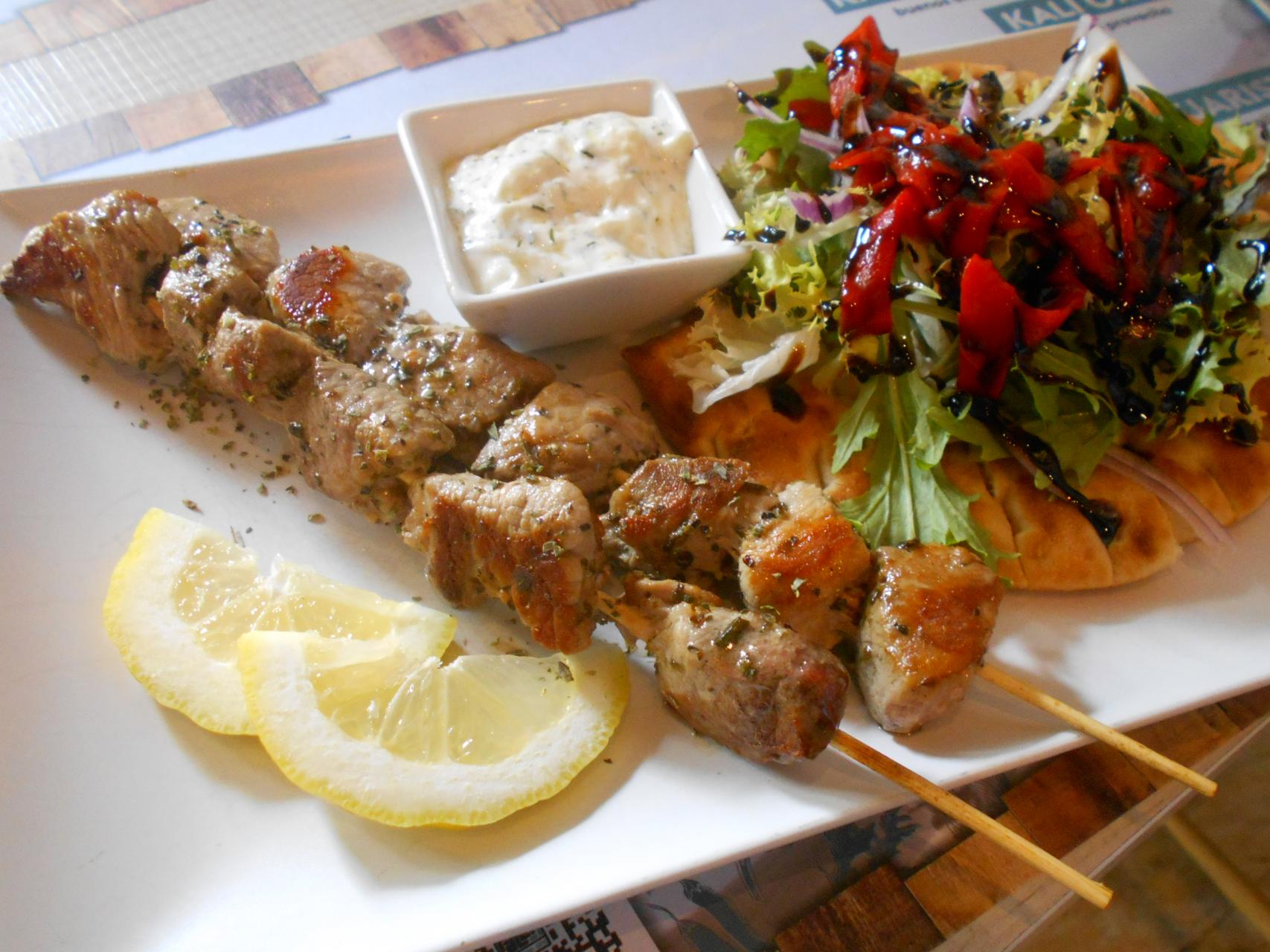 Another excellent dish we had at Palet was Greek food at its simple best: courgette fritters that were beautifully deep-fried, crisp on the outside and succulent inside. That’s always a good combination.

The other dishes were enjoyable enough but came with minor faults that cannot be ignored. The pork brochettes lacked an aromatic herby finish, the moussaka needs more minced neat (compare it with an opulent version they show on a screen) and the baklava, done in cylindrical form instead of flat with light flaky layers of filo pastry cut into traditional diamond shapes, was rolled up and was too compact.

Even so, this was a most enjoyable meal and we’ll be returning to try those other Greek dishes.

Palma has had several Greek restaurants since the first one opened in 1995 but none of them lasted for very long. Cook and co-owner Stavros Gkouliamanis may have hit on the right formula: a good selection of Greek specialities plus food and drink that appeal to Majorcan and Spanish residents in that neighbourhood. I particularly liked his hummus bi tahina: it had the right texture and taste although for me it lacked a nice touch of garlic, an essential characteristic of a hummus bi tahina.

The courgette fritters were also excellent: so crisp on the outside and beautifully moist inside. I’ll nip in for a portion and a caña next time I’m in the neighbourhood. I enjoyed the other dishes but improvements are needed. The pork brochettes need more herby flavours, the moussaka wasn’t meaty enough, the baklava was of unusual cylindrical shape that was too compact. But I’ll be returning to try the other dishes and go down the list, one by one.

Restaurante Palet, Calle Jacinto Verdaguer 15, Palma. Tel:871-034097. Open for lunch and dinner from Monday to Friday, and from 6pm on Saturday and Sunday.